Louisiana is the 18th state incorporated in 1812 into the United States. Here intertwined cultures of colonists and indigenous people. The state nestled in the south of the country. His neighbors are Arkansas and Texas.

Before XVI century Indians lived in the territory of Louisiana. But in 1539 here the Spaniard Hernando de Soto came forward with his expedition.

In 1682, the French came led by the Cavalier de La Salem. They declared the area their possession and began to colonize. The king of France approved it. But something went wrong. 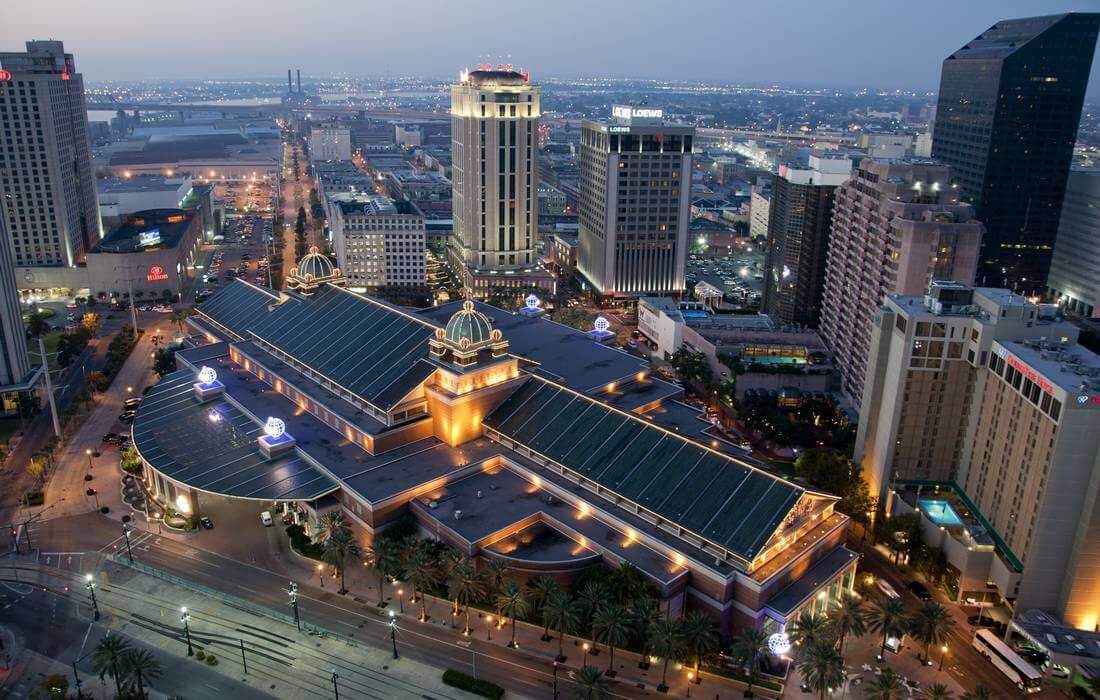 The colonists had a hard time: they were starving, were attacked by the Indians, and the climate was quite specific. In the last expedition, the people rebelled and killed La Salle. And life got better!

K 1718 residents founded the city of New Orleans. Half a century later, the British came to power, then the Spaniards, and then Napoleon Bonaparte came and Louisiana again became the possession of France. But not for long - after 3 years, it was sold to the United States, and by 1812 Louisiana became the 18th state of America.

Around the same time, the largest slave rebellion broke out. To freedom broke hundreds of slaves. They burned down buildings and attacked the planters. Although the rebellion was suppressed, he marked the beginning of changes in society.

Over the past 100 years, French refugees have flocked to Louisiana . Their descendants were called Kajuns. This name is still preserved.

Later, another social group appeared - Creoles. These are the natives of Louisiana, born of white men and black women. Such citizens received decent status in society, education and property. From Creoles went a special dialect in French.

Thanks to the fertile soil and the warm, humid climate, Louisiana developed as an agricultural center of the country. More sugar cane was harvested here, wherever. And through the port of New Orleans, international trade was conducted.

Hurricanes with typhoons did not help either. Serious consequences were after Hurricane Katrina in 2005, due to which 100,000 people were evacuated, and 80% of New Orleans was flooded. The state after this did not immediately recover. Helped tourism and found in the 50s oil deposits. 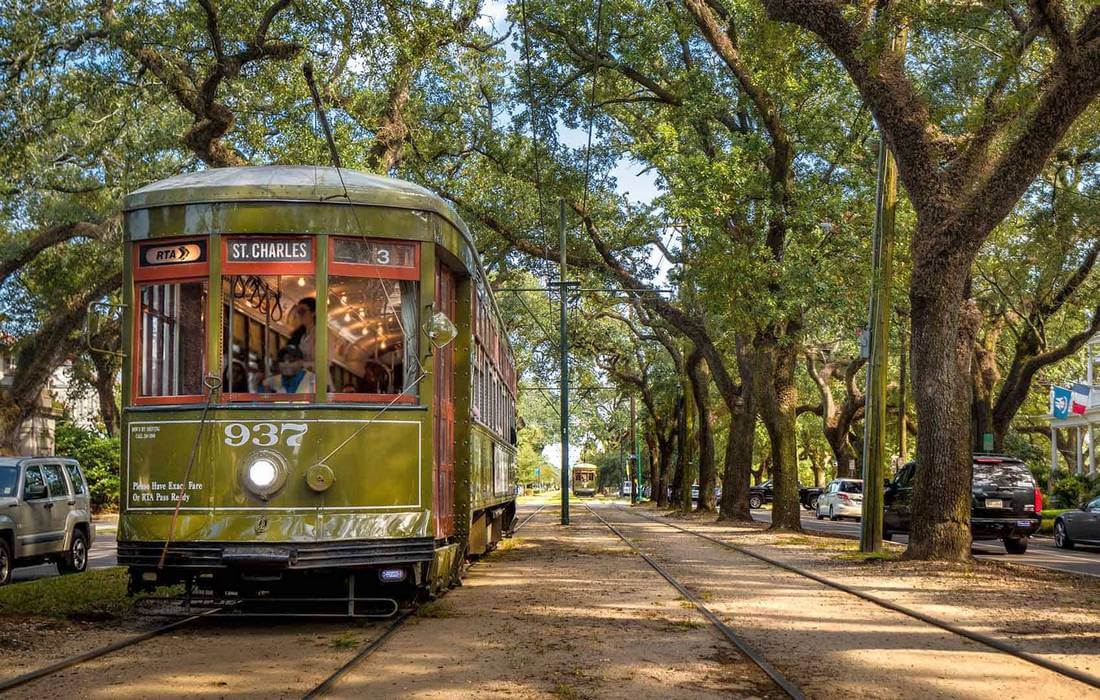 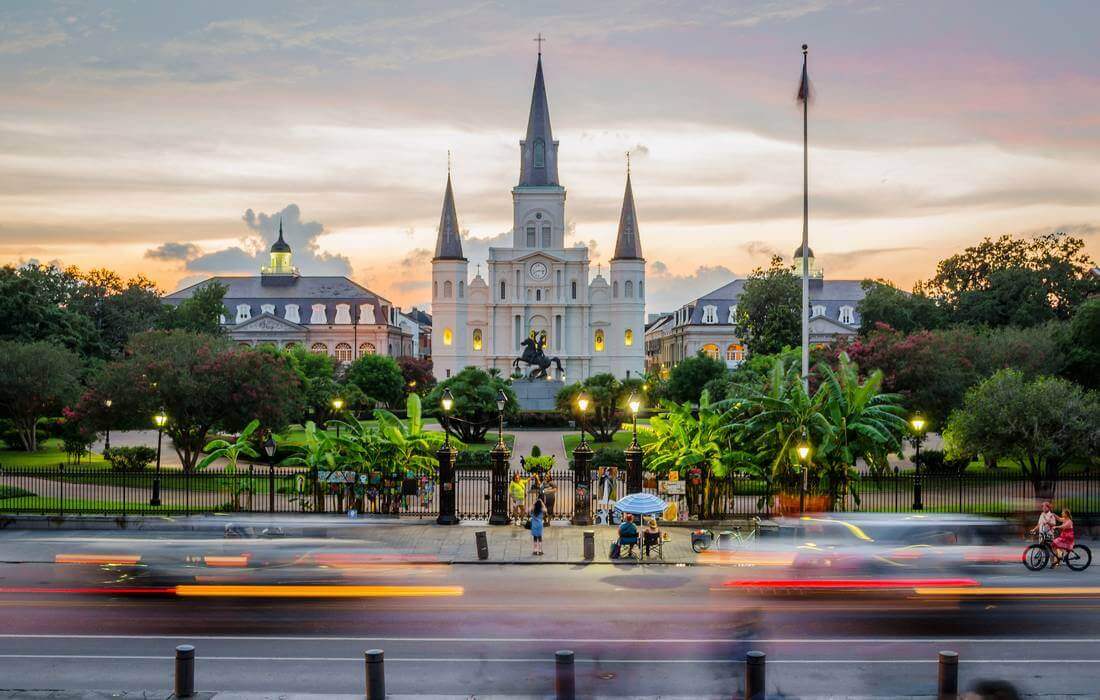 Cities are characterized by an abundance of lakes, rivers and marshes. In Louisiana, a short and warm winter, hot summer with frequent thunderstorms, and windy autumn with hurricanes. There are five main cities, each with its own color.

New Orleans - the first largest city in the state. On an area of 906 km² lives 370 thousand people.

This is a city of jazz and carelessness. Full of adult entertainment, from nightclubs to casinos. Here in February and March the Mardi Gras carnival takes place.

Baton Rouge is the second largest city in Louisiana after New Orleans. It occupies 204 km² , and lives in it 250 thousand people.

Much attention is paid to American football. The symbolism of the local LSU Tigers team is everywhere, and their fans have a million people. Some residents of New Orleans moved here after the evacuation of Hurricane Katrina.

Shreveport is the third largest city, with a population of 200 thousand people, 305 km². The city is famous for its abundance of casinos and low taxes on filming - blockbusters are often filmed here.

Previously, Shreveport had a good life for the oil owners - so that there are old mansions of officials, landowners and industrialists around.

There are a lot of restaurants in Lafayette for every taste. Kajun and Creoles are served. Among the dishes can be caught, for example, crocodile stew.

Once a year at the end of April, an international music festival is held, which lasts 4 days.

Kenner is located on the banks of the Mississippi River, now holds the status of a suburb of New Orleans.

If you want to relax in a quiet place, Kenner will be a good choice. 67 thousand people live in it, and the total area of the city is 39 km².

Decided which cities you want to visit? Then contact American Butler - we will organize a sightseeing tour!
Send a request
Also read
Interesting places
Read more
Miami Beaches
Читать еще
How does recycling work in USA
10 years in prison for dumping trash? Easily, if you threw the packaging from under the laundry detergent in the tank for food waste. More recently, Americans did not want to dig in the trash, but now… Читать еще
Who is Elon Musk
Do you know who Elon Musk is, where he grew up and what does he do? What has he done useful and what plans to achieve? Read more in the article about one of the most famous entrepreneurs of our time. Читать еще
Fast food in the USA
What do you know about fast food? Probably that they do not need to get involved. And rightly so, but in fact the question is much more interesting. Argue that we will break at least 3 stereotypes right… Читать еще
Craft Contemporary
Craft Contemporary is a building with more than half a century of history, a gallery of folk art. Since Los Angeles has become an important international art center, the Museum of Crafts and Folk Art… Читать еще
Cities of Louisiana 5 1 0 0
Sharing: