Who is Walt Disney and what made him famous

Walt Disney appears to most of us as a good uncle who draws cartoons — he came up with Mickey Mouse, spawned princesses and built a huge amusement park. In fact, everything is true and not true at the same time.

Disney has become a symbol of American multi-production, but there are still a lot of questions as to its identity. 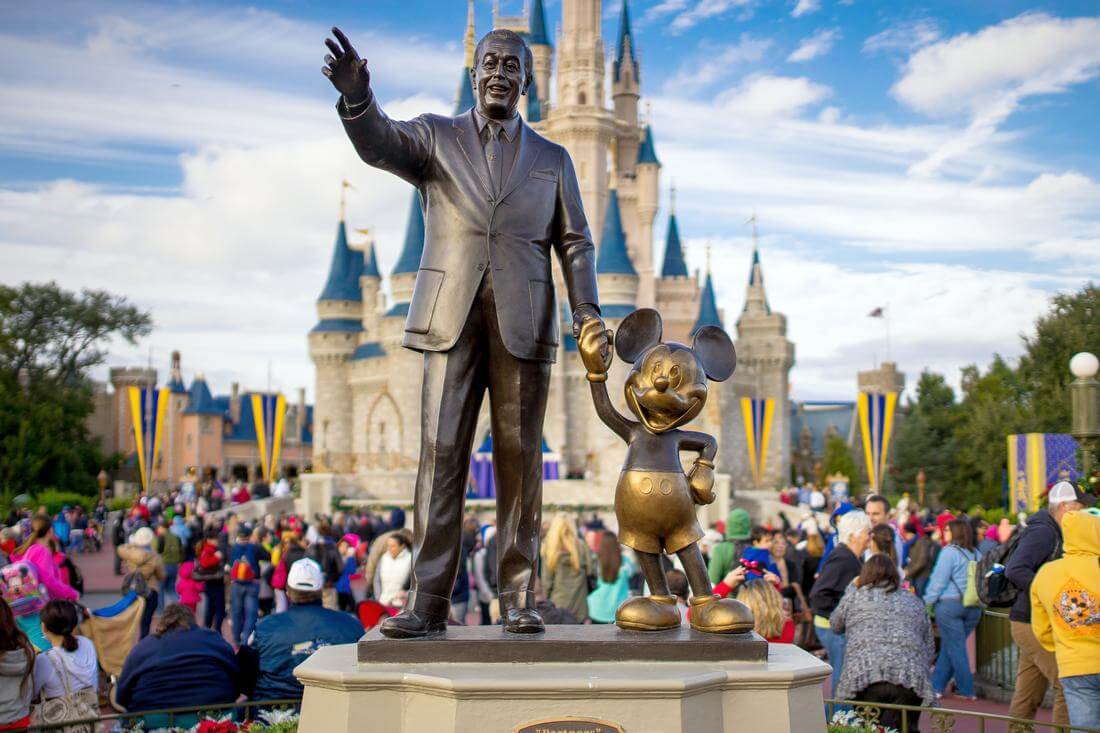 Life before The Walt Disney Company

Disney's career began not particularly rosy — his already poor youth came in the years of the First World War. Animation was a kind of distraction after he worked as an ambulance driver on the fronts. So he first got a job in an advertising campaign, worked as a freelance artist for a couple of years and then created his animation studio.

From the advertising company, by the way, Disney was asked to leave — attention! — due to lack of imagination. 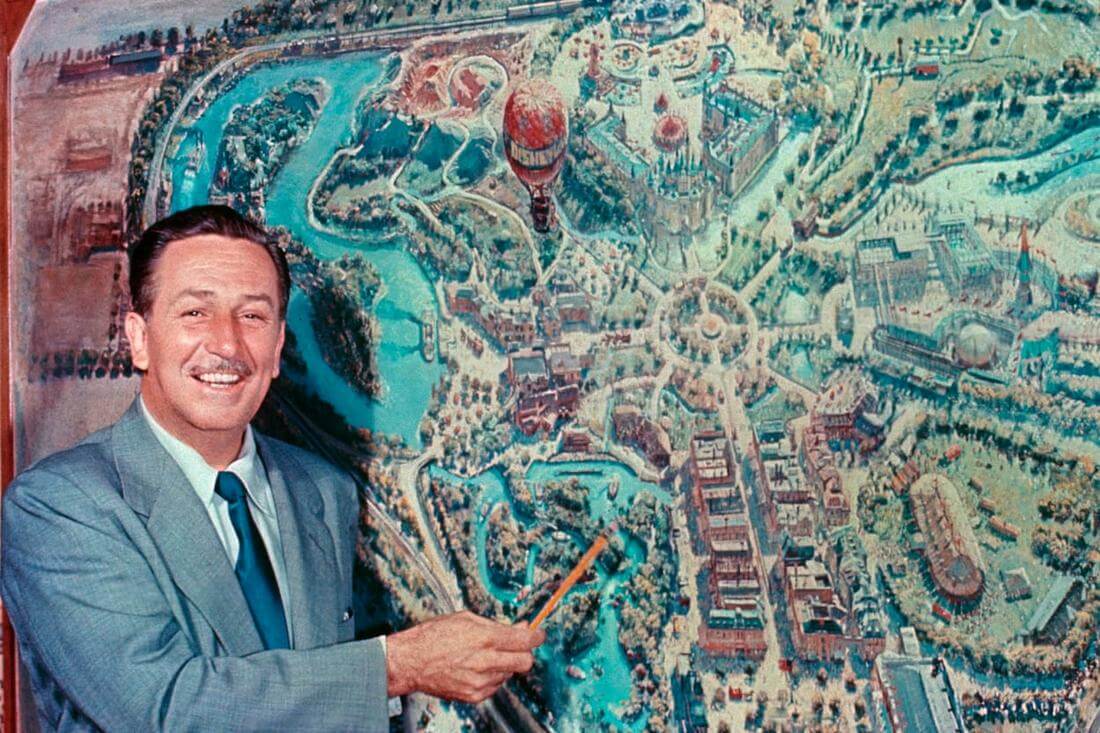 To begin with, we will immediately debunk the big myth — Mickey Mouse (who was then called Mortimer) invented and drew, not Disney, but his friend and colleague Ub Iwerks. Moreover, all the early work of Disney can be divided into two — half of the characters belonged to the hand of Iwerks. But Disney turned a little mouse from a minor character into the main character of cartoons. He brought his friends to him — Minnie Mouse, Donald Duck, Pluto and many other religious characters. It's pretty funny, considering that Walt Disney himself was deathly afraid of rodents and especially mice. 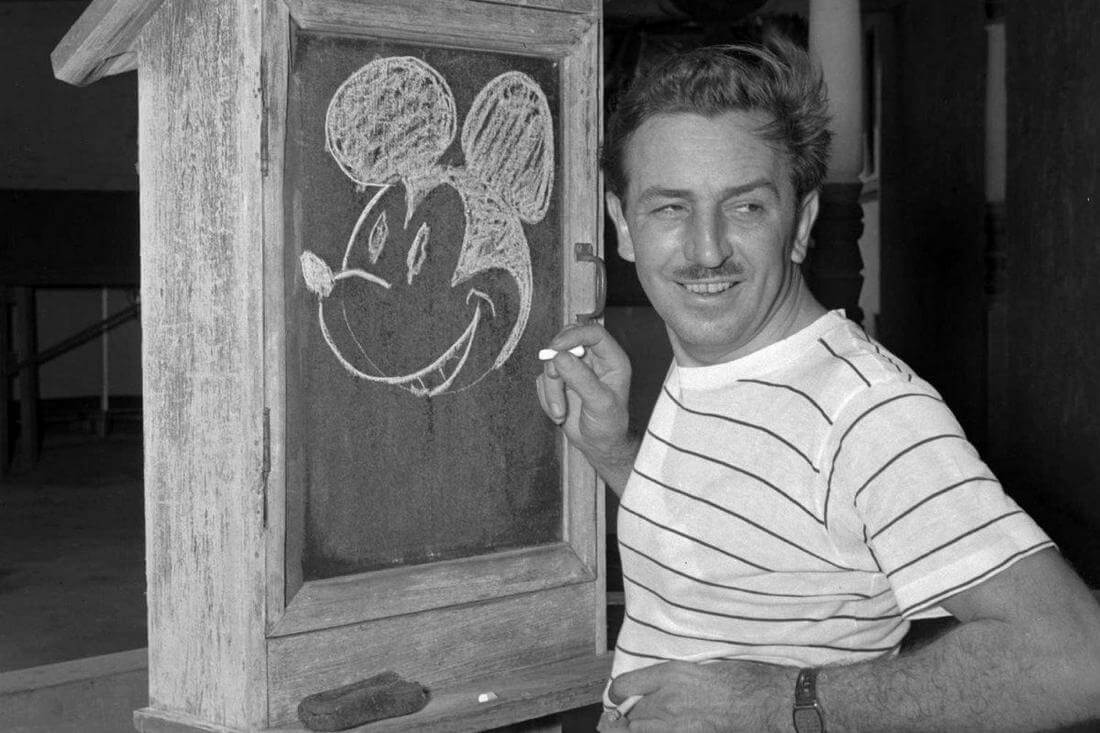 It all began with the "Rabbit Oswald" — a cartoon produced by Disney and Iwerks was bought by Universal Pictures and was successfully accepted by the public. Next came the series of cartoons about Alice in Wonderland, Snow White, the baby elephant Dumbo, Bambi and Pinocchio. A series of films about princesses - Cinderella, Belle, Sleeping Beauty and many others — went down in history as canon. Speaking of Cinderella, we represent exactly the Disney blonde girl in a sky-blue dress.

In almost every new cartoon, the studio used new tricks. Improved sound, improved animation technology and effects, even titles and screensavers. Disney introduced a bonus system for studio workers — for each proposal to improve the quality of the film, the employee received cash rewards. These same measures were then adopted by almost all the leading studios of the world, Disney cartoons became the engine of progress in the industry. As a result, The Walt Disney Company received the Academy Award 26 times, the Oscar.

Disney somehow film almost all popular fairy tales and children's stories, sometimes creating original stories. But what the viewer did not understand was the “Fantasy” of Disney itself. He nurtured this project for a long time and rented almost without the participation of other artists. The cartoon was so avant-garde and even psychedelic in places that for some time reduced the public interest in the work of the company. After a frank failure at the box office, the studio returned to the classic format and never left it again.

Rumor has it that Disney's body was frozen because he believed in the revitalizing technologies of the future. In fact, everything is more prosaic. Walt Disney smoked almost his whole life, painfully died of lung cancer at the age of 65, and was quite normally buried in one of the cemeteries of California. After his death, the company decided not to depict smoking scenes in cartoons. 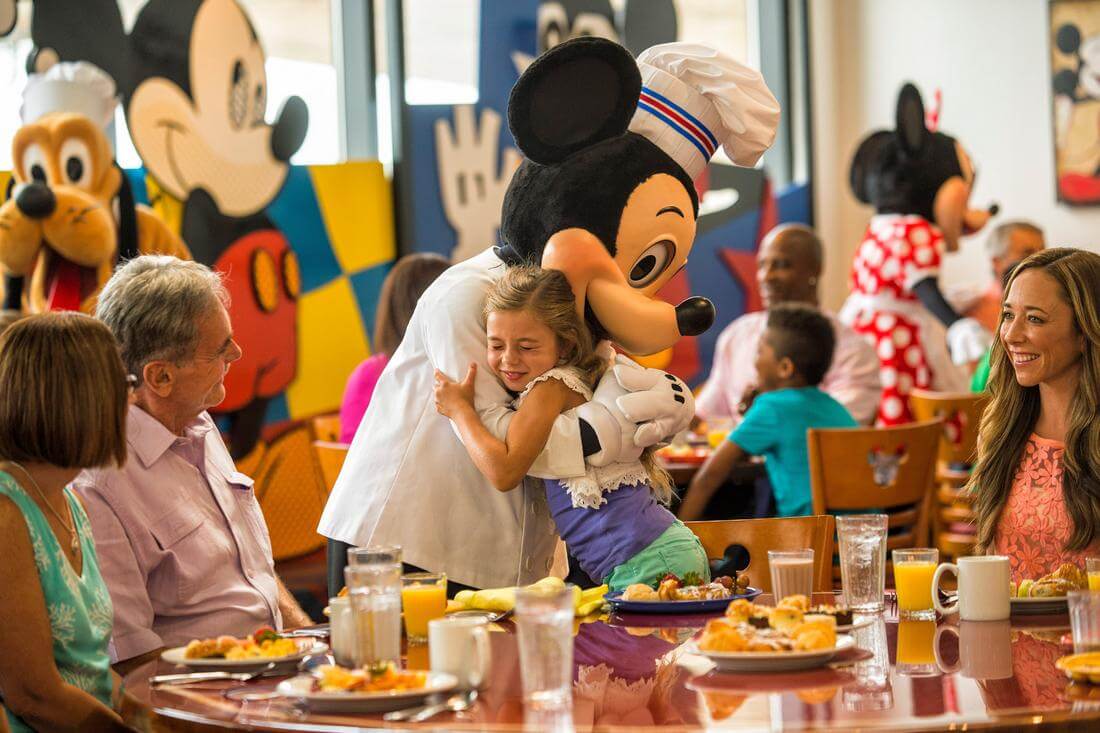 The theme park project has been implemented in the last years of Disney’s life. He personally bought 65 hectares of land for the construction of a huge site, where those fairy tales and cartoons would be recreated. In order to raise money for construction, a television program was launched first, and then the Disney channel. The first park was opened near Los Angeles, in the city of Anaheim. And the first day of its existence turned out to be a living hell.

The number of visitors turned out to be 2.5 times more than planned (29 thousand instead of 11), a traffic collapse formed around the park, visitors shoes tied up in the recently filled asphalt, the fountains for drinking did not work (with a heat of almost 95 degrees), one of the attractions had a leak gas. It would seem that the project is doomed. But the next day, 50,000 people were already in the queue at the entrance.

Park had and continues to have wide popularity. Every year in the Disneylands of America and Europe there are about 15 million people, the income from it exceeds the total box office from all the cartoons of the company.

One of the symbols of Disneyland became the Sleeping Beauty Castle, which later became the company's logo. It is believed that the prototype of it was the Bavarian Neuschwanstein Castle — Disney saw it during a trip to Europe in the 30s. But also many believe that this was a kind of rebellious salute in Germany, to which Disney had special feelings. 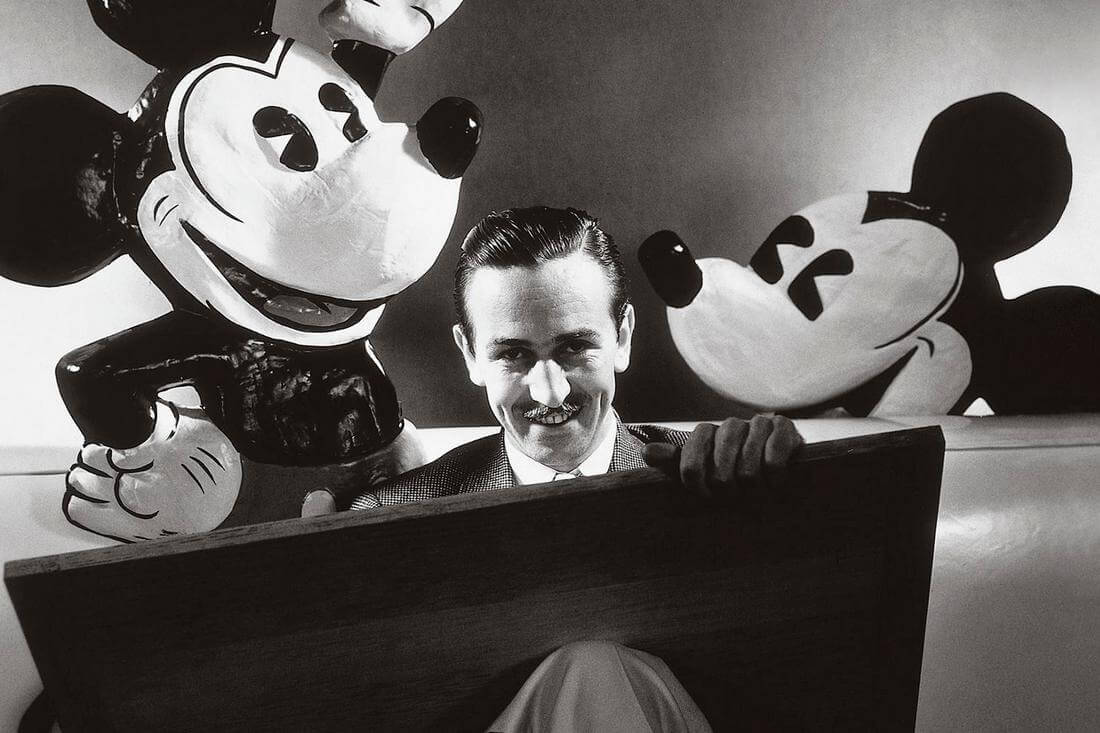 Unexpected twist: who Disney really was

Like anyone close to genius, Walt Disney had his own wormhole. 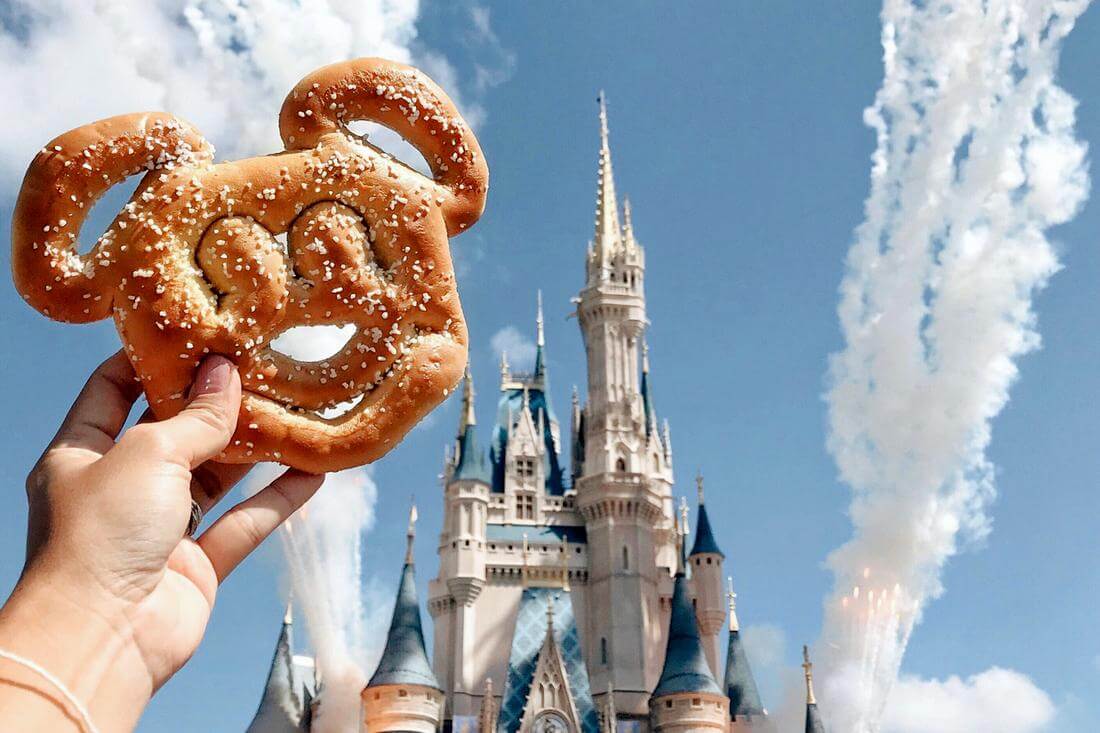 It consisted in the following: an exemplary family man, author and artist of good children's cartoons willingly collaborated with the FBI, regularly wrote denunciations of his colleagues, was good to some ideas of Nazism, but to Jews and communists — bad. It is known that he maintained friendly relations with the German actress, director and Nazi supporter Leni Riefenstahl, and attended meetings of the organization that advocated friendship with Nazi Germany.

In fact, he simply believed that such a friendship was better than engaging the US in a war. But the fact remains that more than a dozen of the staff of his studio visited interrogations because of careless statements.

His attitude towards fame was also ambiguous. He so zealously wanted to be the only person of the company that he ruined relations with almost all co-authors. In particular, the same Ub Iverks, with whom they were friends and drew the first episodes for The Walt Disney Company, was brought to the limit. Due to the fact that Disney did not recognize him as a full-fledged collaborator, he left the company, tried to organize his studios and in every possible way move away from Disney. In the end, he went into filmmaking and quite peacefully and amicably worked on special effects with many well-known directors. For example, the visual part of Hitchcock's “Birds” is his brainchild.

Today, everyone can look at the studios and parks of the Walt Disney Corporation — just come to America.

And this is not a problem: American Butler will help you to solve all questions regarding flight, travel, accommodation and leisure — just write us in the chat window.
Send a request