Public transport in Miami is very developed and allows you to absolutely freely and comfortably move within the city and in the suburbs without a personal car.

The main types of passenger public transport are metro, electric trains, buses and taxis. There is a free monorail for 21 stations. Tri-Rail trains go to the suburbs. 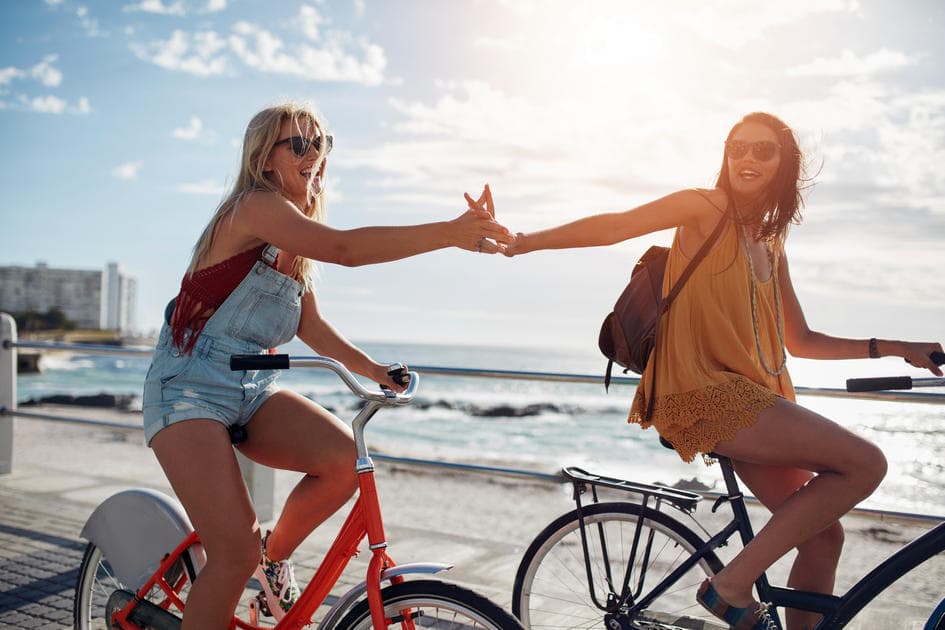 What transport to use

For tourists with simple routes, movements to parks, beaches, restaurants, it is especially convenient. A car in the parking lot almost always requires money, about a dollar an hour, for traveling around the neighborhood you can rent a car.

Taxi calling is also a common service and it is usually cheaper than renting a car, except when you go on a picnic or fishing on the ocean.

You can rent a bike, scooter, electric scooter, scooter. Part of the transport is free and air-conditioned.

Scheme of urban transport and transfer stations can be downloaded online. In most hotels and hostels you can buy or take a free transit map with the designation of all possible modes of transport and convenient routes. Passenger bus transport scheme includes suburbs.

Imagine a subway and a Tri-Rail train from the airport - a suburban train. Not an expensive sky-express, but an ordinary train. Traveling by train will cost $2.5 dollars. A trip to the metro is $2.25 for a one-time trip, and is open from 5 am until midnight. That is, from the night club, closing at 5 am, it is quite possible to go by subway. The interval of movement is 15-30 minutes depending on whether it is a day off or a working day. The total length of the metro lines is about 40 km, there are 2 branches - green and orange and 23 stations. From the subway there are transfers to suburban trains. It's comfortable.

For the passage, a special Easy Card ticket is used, valid also for buses. If you need to get to the coast of Biscayne Bay in Downtown, you need to transfer to a suburban electric train. 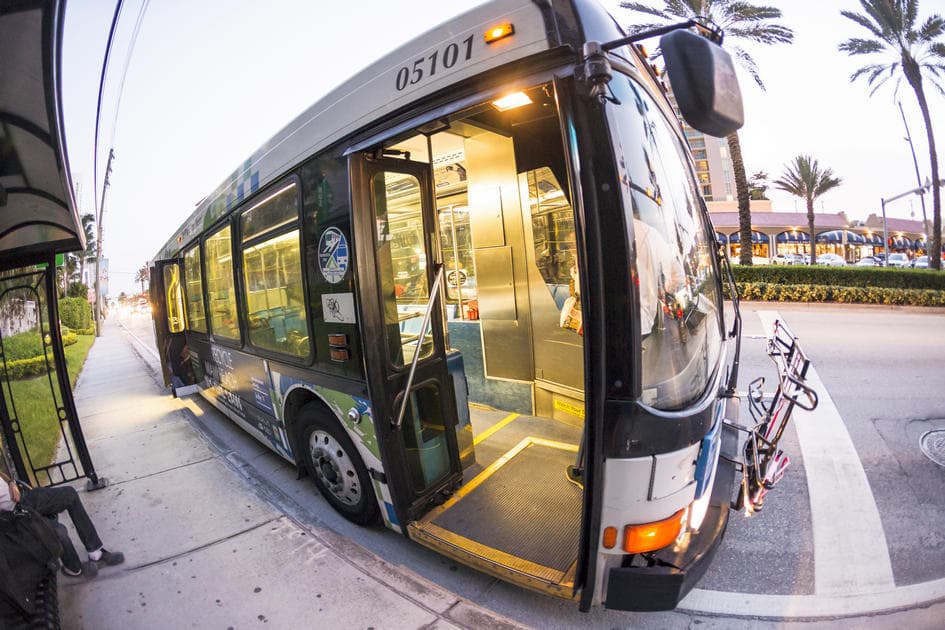 Traveling by bus to Miami costs the same as the metro - $2,25. Express costs a bit more expensive, $2.65. The difference is that a regular bus stops at almost every street crossing. Express a little faster. Total routes about a hundred.

The main bus time in Miami starts at 4:30 and ends at 1:30. There are round the clock routes. The average interval of movement is 19 minutes at peak hours and 20 minutes the rest of the time.

Boarding is carried out in the front door. You can pay with Easy Card or pay with money. Note that the driver does not give change, because it distracts from driving. At the checkout there is no possibility of issuing a change. 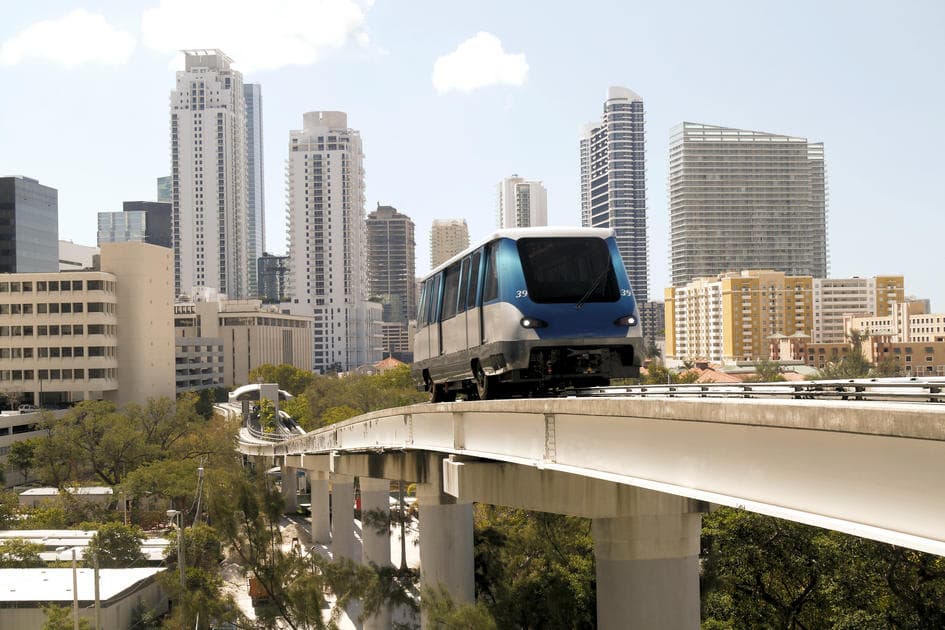 Metromover in Miami - downtown monorail. Electric trains travel from Government Center and Brickel subway stations. In total, the metro-cooler has more than 20 stops, it is not necessary to sit down at subway stations. The length of the route is about 6 kilometers, the journey time along the entire route is 15 minutes. Trains run automatically, without a driver. You can say this is a special free version of Disneyland or a prototype of the transport of the future. In metromavera trailers there is a free public wi-fi network and air conditioning.

You may find the Miami Metromover map useful.

Another type of free public transport in Miami. Comfortable electric transport with air conditioning, having a short closed route. It is very popular among tourists as a kind of entertaining and free excursion. 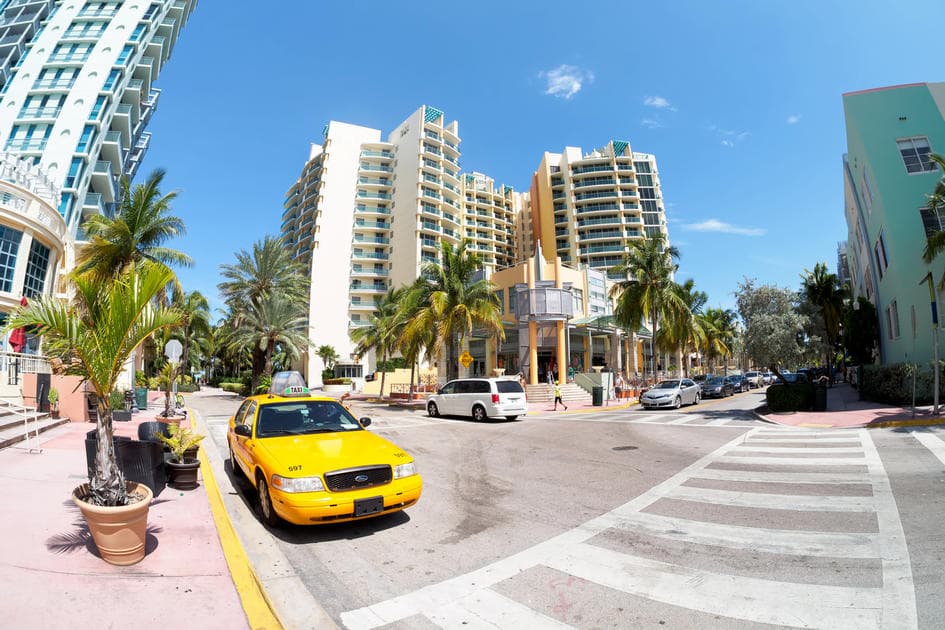 There are several taxi companies, there are public and private ones. Charging the cost of a private taxi can be found on the websites of each company separately. For tourists it is recommended to use official taxis. To calculate the cost of the trip, use the service Taxifarefinder.

Landing in the official taxi costs $2.5, then $2.4 per kilometer. You can pay both cash and non-cash. Do not forget about the mandatory tip - 15-20%. Toll roads and bridges are charged separately.

Tipping in America is such a thing, it is not a good tone requirement and a sign of appreciation for the good service, but mandatory additional payments.

Taxis on limousines exist in any large city with a hectic social life. Luxury limousine taxi will cost an average of $500 per hour.

As well as all over the world, to get to the suburbs, you need to use suburban trains. The fare is low, only $2.5, comparable to a bus ride. The length of the suburban railway network is 115 km. 18 railway stations are located at a considerable distance from each other. Central stations have subway connections.

Schedule trains necessarily specify in advance. Features of the movement of suburban trains are about the same as ours. On average, trains run once an hour. 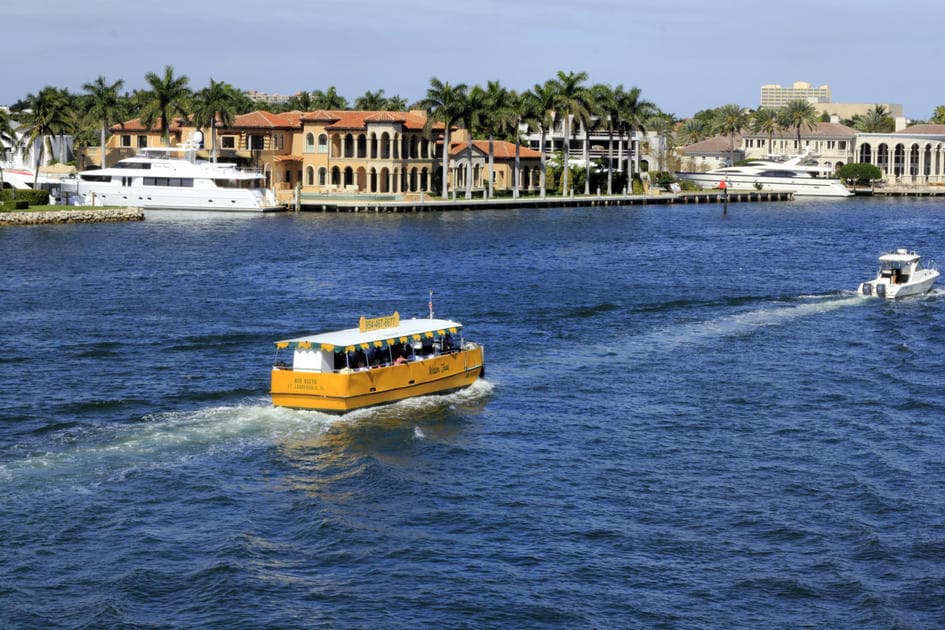 Since Miami is located on the coast, water transport in Miami, in particular, water taxi, is very common. This is not quite a taxi, rather, the service operates on the principle of water trams. There are certain routes, for example, along the bay or to downtown. The fare is $15 one way or$ 25 there and back. Bicycle transportation costs $5, baby strollers are carried free of charge.

Miami is a resort and for the convenience of tourists special sightseeing tours and tourist buses go around the city.

Plus a bus tour - you will be rolled around all the attractions of Miami. If this is your first time in a city, a sightseeing tour will help you get a general idea of ​​the plan of the city, where it is, in which direction and at what distance. The fare is $40, children less than 1 meter tall can go for free. Early in the morning it's nice to ride around Miami in a double-decker tourist bus. There are seats on the roof. During the heat of the day it is a serious test. Choose for excursions suitable not hot time and do not forget about means of protection from the sun and headdresses. 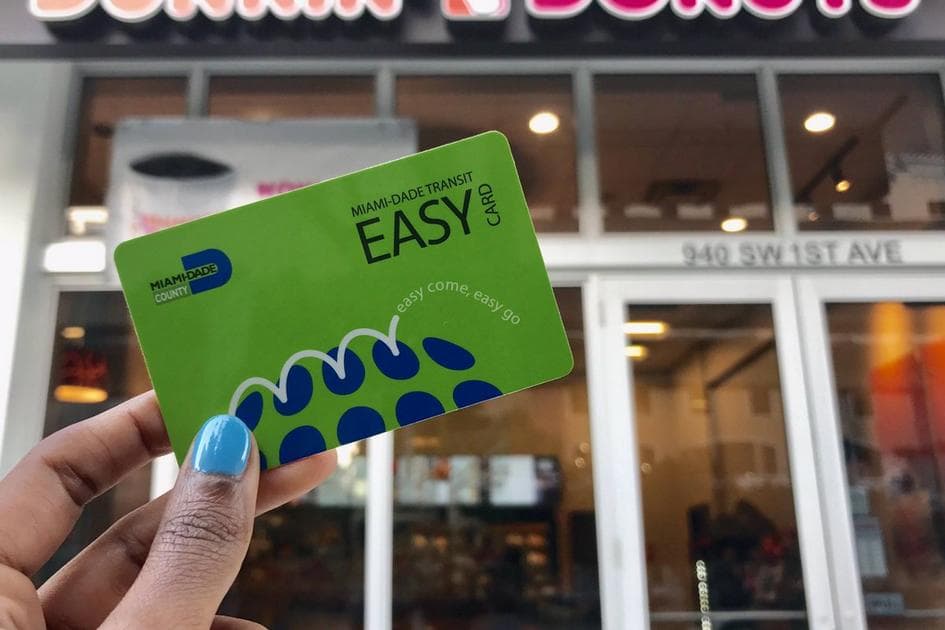 Where to buy Easy Card for the subway and bus

Easy Card can be purchased for 24 hours, a week or a month. Maps are sold at all metro stations. You can recharge cards for travel via the Internet. What is inconvenient, the transfer of money to the card account is carried out 24 hours. Quickly replenish the card does not work. Or buy a new one or have to deposit money in the card account in advance.

In general, Easy cards save time and nerves. Counting off each time $2.25 is not too convenient, as well as accepting each time the total lack of change. Traveling by Russian standards is not cheap, it is a shame to overpay.

Personal transport in the United States is an absolute necessity. Automobile transport - it's a kind of fetish, a symbol of freedom of movement and general easiness. We recommend using taxi services for the first time, in order to assess, for how long you need a car for rent.

During brief visit or with little mobility, a taxi services may be enough. But if you want to visit the neighborhood, suburbs, museums, shops, amusement parks, casinos, restaurants of Miami, you may need even a car with a local driver. 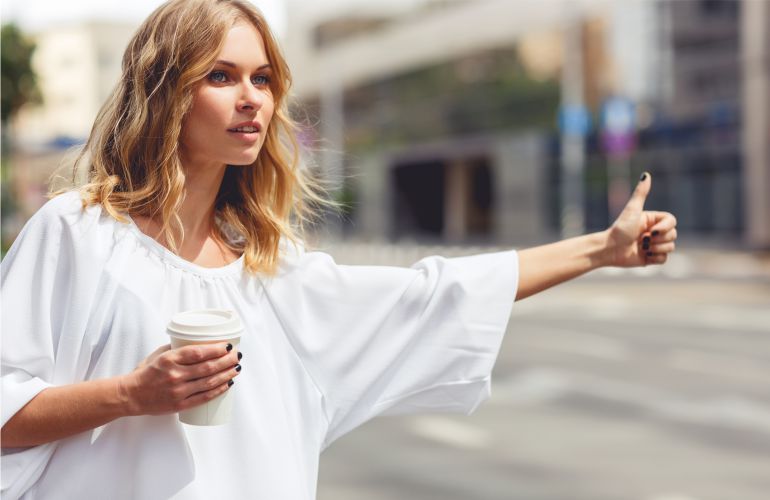 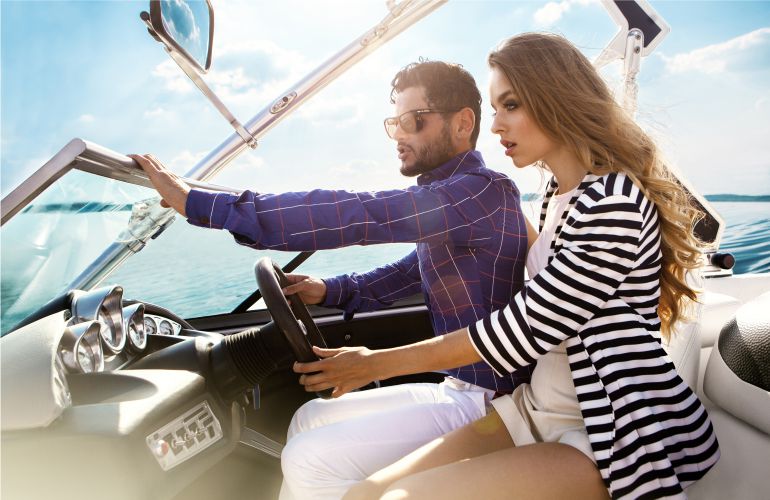 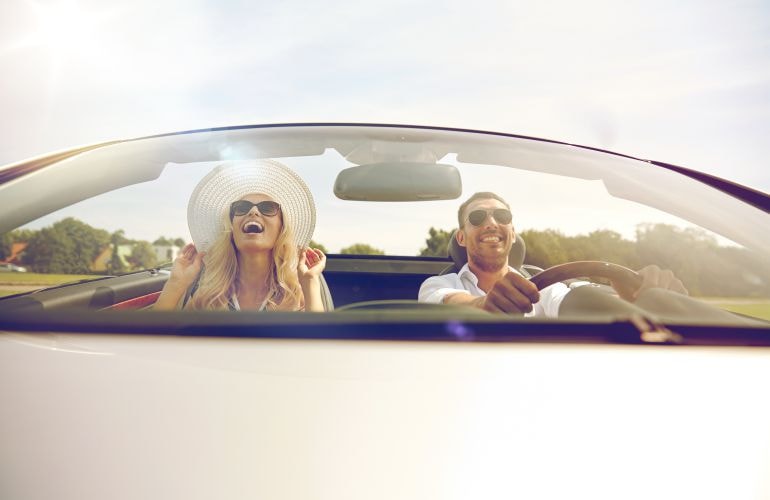 Despite the well-adjusted transport system and affordable municipal transport in Miami, walking in the United States is not accepted. With the relatively low cost of electric trains and buses in Miami, they have well-known disadvantages - it is low speed in comparison with a car and a determinate route, not always coinciding with the desired.

The American Butler company offers the following types of transportation services in Miami.

Absolutely any type of transport

The requirements of Miami's guests for transportation are diverse, as are the routes. It may also require sea transport, a boat or a yacht, an airplane or seaplane, a helicopter to visit remote islands and reserves, express taxi, a car with a driver for a day or a week, a car rental.

Taxi is the most popular service for visitors. Automobile transport in the US is the most common.

The convenience of taxis is that you don't need to worry about parking, the minuses are in waiting for the car and the relatively high cost in case of constant use. We are ready to take upon ourselves a taxi call, a meeting at the airport, transportation of people and luggage.

Automobile transport is not the only possible. The city is located on the coast and sea transportation in Miami is in demand not less. Yachts, catamarans, pleasure boats.

For a romantic sea walk you can rent a catamaran and go along the coast or to the nearby islands. For sea fishing, we are ready to provide a whole vessel with a full set of equipment and an experienced crew of seamen.

The American Butler company is in a hurry to help with the selection of any vehicle in Miami. Leave your request or contact us by phone number +1-305-588-7298.
Send a request
Miami
What to see
Districts
Museums
Theatres
Zoos
Parks and reserves
Festivals and exhibitions
Health and Sport
Shopping
Restaurants
Nightclubs
Casino