3-4 hours
$199
More
order
Coral Castle
The fascinating and mysterious museum in the southern part of Miami is an incredible place that attracts thousands of tourists and many scientists.
Load more
Nothing found

"Say Orlando YES" is the slogan of the Orange County administrative center. In the past, citrus and cotton plantations were the main industry here, but in 1971 Walt Disney built a huge amusement park in the center of the Florida peninsula.

The entertainment industry is developing by leaps and bounds and today Orlando is the world capital of theme parks.

Features and Attractions in Orlando

The central region of Orlando is Downtown, which is small in area but not in density. Orange Street, Church Street and Wall Street, but without an exchange, are the center of evening life. At these addresses you can find the most attractive and unusual clubs, cafes and restaurants, for example, the completely icy Ice Bar.

You can take a walk in the green area of Lake Eola, see the famous Orlando Science Center and the Ripley Kunstkamera near-science museum, where among the exhibits there is a skeleton of a mermaid and other interesting things.

Not far from the city are the beaches of the Atlantic Ocean and the Gulf of Mexico, the D. F Kennedy Space Center with cosmodrome sites and a huge Gatorland reptile park.

Orlando is the capital of amusement parks and attractions

Disneyland Florida is equal in area to Paris and in many ways resembles a small independent state. The giant project was the brainchild of Disney, who dreamed of a "settlement of the future." He approved the place, spent the purchase of the surrounding lands, designed and breathed life into a huge complex, built on a deserted swampy place without a single infrastructure.

By the opening, the park had attractions of the Magic Kingdom, two hotels, a camping, three golf courses and 5,000 employees. Today there are more than 50,000. A movie studio with the heroes of the famous Toy Stories and Star Wars, the Epcot Center with informative excursions about space, the Kingdom of the Animals, a nature lake reserve, water, winter attractions and a zone for sports events have joined the classic Kingdom. 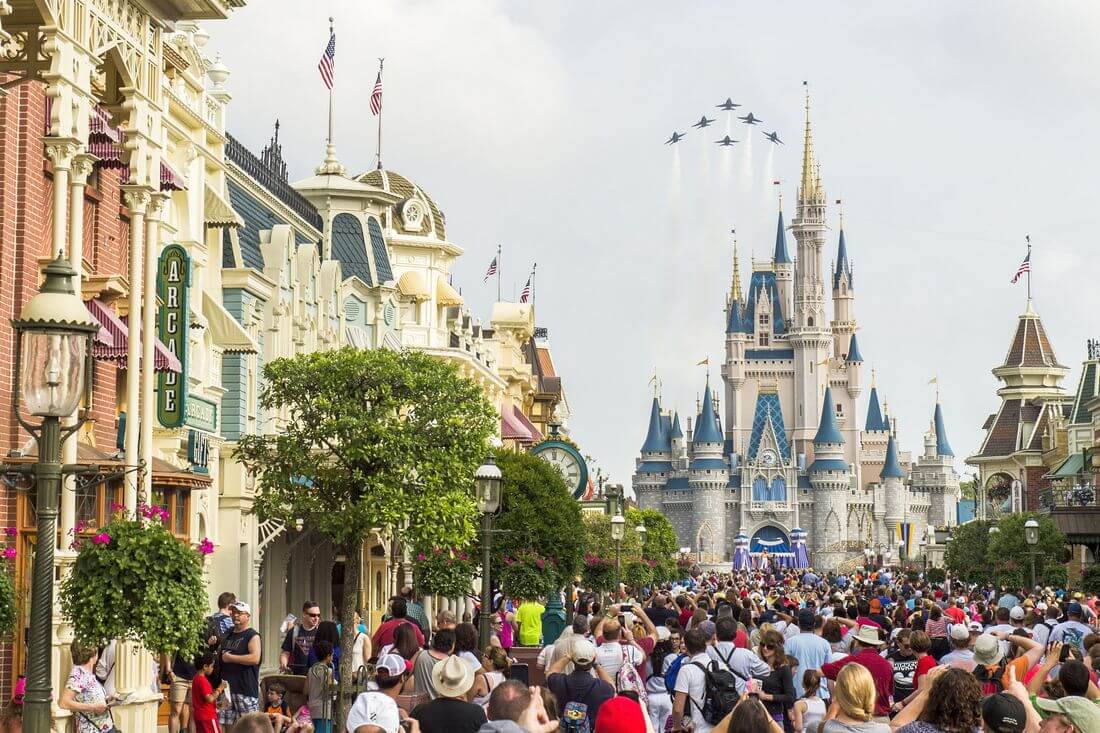 The complex is also a popular congress venue and a direct competitor to Las Vegas: hotels have 20,000 rooms with different themes. In 1995, the Fairy Wedding Pavilion opened. In this romantic corner, weddings are organized with receptions and fabulous photo shoots, and after the newlyweds can immediately go on a cruise honeymoon.

Universal opened the park in 1999, following the success of a similar format in California and the growing flow of tourists to Disneyland. Although the entertainment giants do not compete openly and each emphasizes their uniqueness, both attracted famous directors to the creation of attractions: George Lucas worked for Disneyland, Steven Spielberg for Universal.

The Universal Studios have recreated sets of famous films such as Men in Black, Transformers, The Simpsons and Shrek, and attractions based on them. There are also wrestling rings and a roller coaster.

Adventure Island is a separate thematic space, each of which faces a lake or canal. Superheroes Marvel, dinosaurs of the Jurassic Park, Harry Potter and the heroes of myths of Ancient Greece live here, and for the smallest — the characters of Dr. Seuss.

Waterpark Volcano Bay was rebuilt in 2017, on the site of the predecessor of Wet & Wild. The scenery takes visitors to the landscapes of Polynesia. Krakatu, a sixty-meter-high volcano and the center of the park, spews water during the day and lava at night. Nearby are water slides, artificial waves, sliding slopes and pools with terraces for relaxation and sunbathing.

Orlando got its second name because of the numerous film and television studios of the city. Many series and television shows are filmed here. The Florida Film Festival attracts young filmmakers: it has released many interesting independent projects, such as the Blair and Monster Witch.

Theatrical stages are also held in high esteem. Ballet and opera give excellent performances, and numerous troupes are closely connected with the departments of theatrical art of the University of Florida and Rollis College.

In the spring, two popular theater festivals are held in the city: Fringe in Lok Haven Park and New Plays by Lake Harriet.

American Butler will be happy to help organize any sightseeing program in the city of Orlando for you.