Baton Rouge is the second largest city in Louisiana after New Orleans. It occupies 204 km², and lives in it 250 thousand people. And if we take the suburbs, then 4 times more. Let's see what this city is all about. 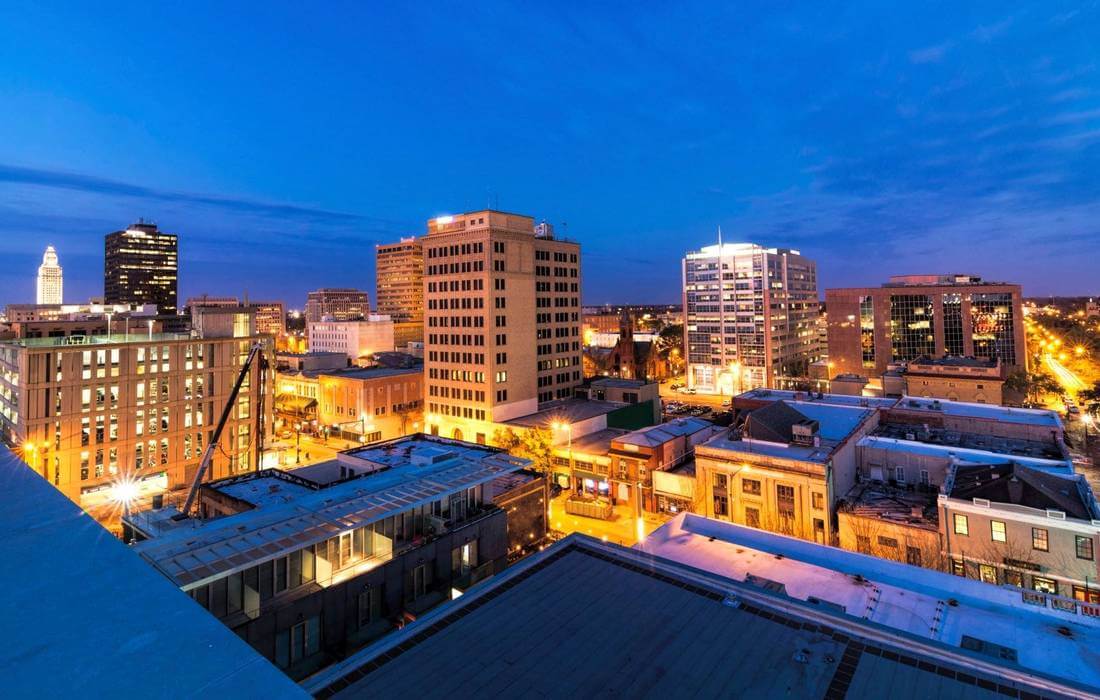 Through the Baton Rouge passes the Mississippi River. The fact that the city was founded in a convenient place for the military influenced the active construction of the dams - they protect the city from flooding.

The climate is subtropical, with warm, humid summers and short winters. You can see no snow here at all, but strong winds are welcome. It comes to hurricanes - most of them fall.

Most of the population - African Americans, they are here 55%. Unfortunately, Baton Rouge has the same problems as a typical Russian city: bad roads, traffic jams and trouble with public transport.

Great attention is paid to sport. AT 1860 in the city built the University of Louisiana, famous for its football team LSU Tigers.

Symbols of the local team are everywhere, from souvenirs to cafes. Up to 100 thousand spectators can fall on the stadium during their game.

1699 Researcher Lemoine Pierre is leading an expedition along the Mississippi River. Along the way, he finds a cypress tree adorned with blood stains and animal skins. The plant delimited the land of the Indians.

The French did not think for a long time and called the place a “red stick” - this is exactly what Baton Rouge translates to.

Passed 20 years. The French came to the found place and built a military outpost. Then Baton Rouge began to pass from hand to hand: he was in the power of England, Spain and the Confederates. With the victory in the civil war of the northerners, Baton Rouge joined the United States. TO 1849 the city became the capital of Louisiana.

AT 1928 Governor Hyi Long ordered the construction of a new Capitol to replace the old one. TO 1932 construction is over. The project budget was $5 million. In this place, 3 years later, Long was killed. On the wall of the Capitol there are still traces of bullets.

Oil production has been developing since the middle of the 20th century. Now Louisiana creates a quarter of all US plastic. Sixty of the state’s 100 plants are located in Baton Rouge.

During the civil war, 5,500 people lived in the city, but there was a sharp leap in development - and now there are about 250,000 citizens living here. Hurricane Katrina also affected the increase - the victims of New Orleans rushed here. 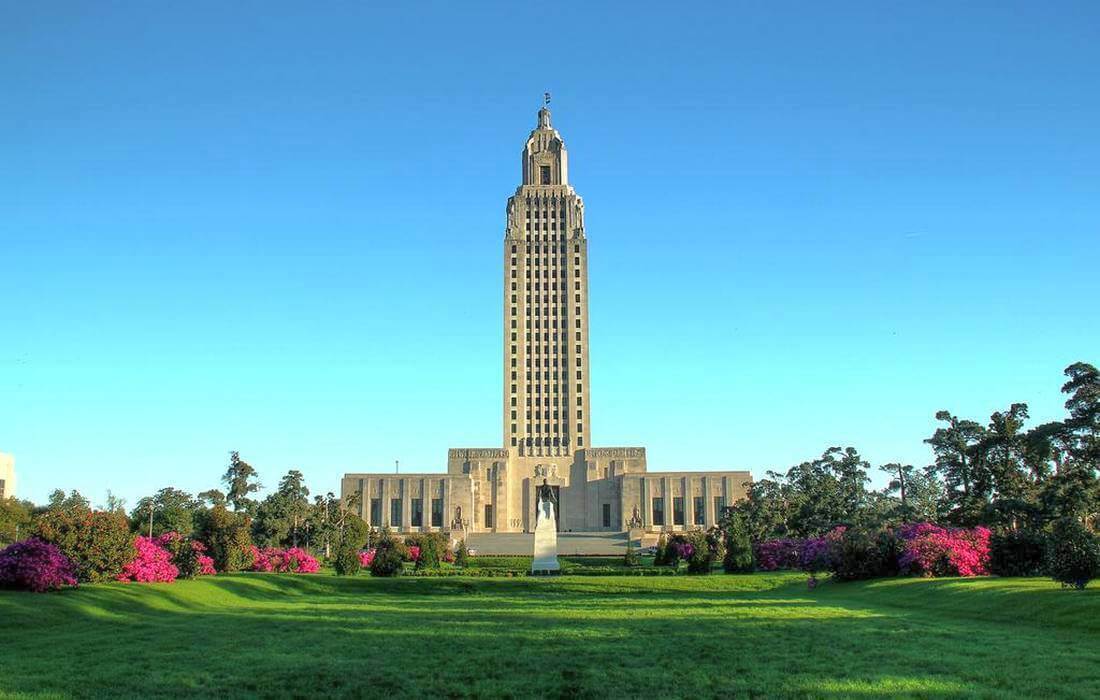 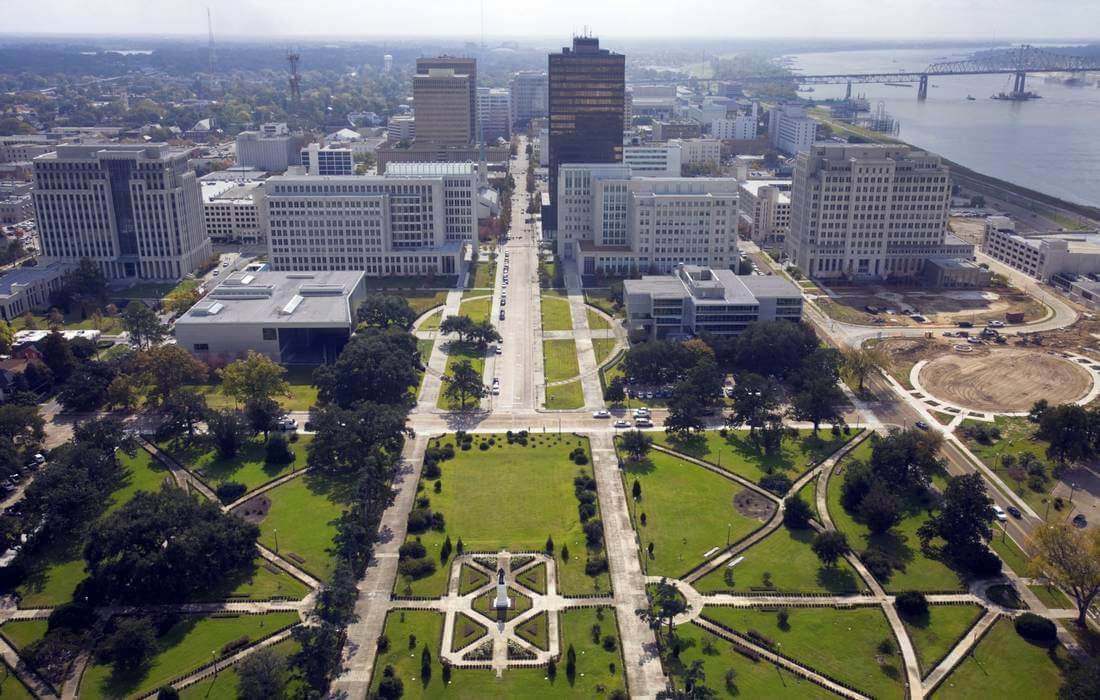 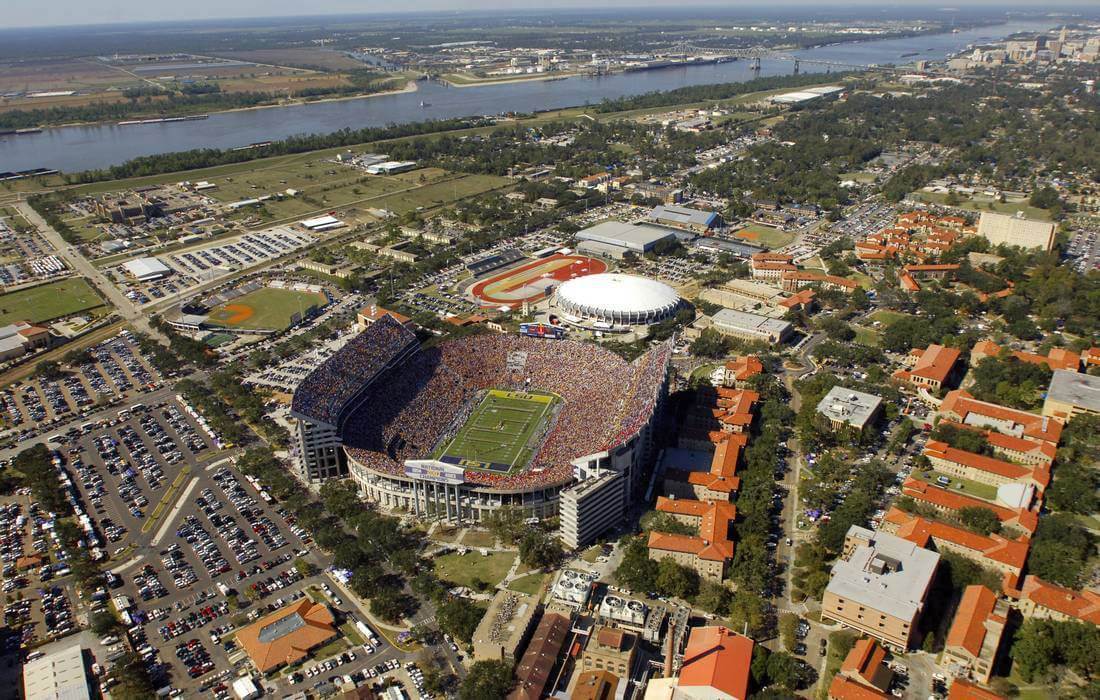 The building has a height of 34 floors, a stronghold of officials from around the state. The highest capitol at the time of construction. Recognized as a historical monument. Do not confuse with the Old Capitol - now there is the Museum of Political History.

Around the Capitol is a giant park with flowers and centuries-old oaks. There you will find a 4-meter the statue of Governor Huey Long, who asked to build a building.

Shaw Center for the Arts

The main bastion of entertainment in the city. It includes art galleries, a science center and lecture halls. There is also an art museum, which contains the largest collection of ceramics in the country.

Destroyer "Kidd" - a ship that participated in the naval battles of the Second World War. His symbol is the pirate William Kidd, although in fact they named the ship in honor of Isaac Kidd, the admiral who died at Pearl Harbor.

Since 1945, Kidd has not changed at all and retains its original appearance, only sometimes restored. Now open to public scrutiny. The tour will take 2 hours.

The museum has absorbed all the farm heritage of the state. On the plantation there is a barn with old tools of the XIX century, furniture and household utensils. Near the house of the slave driver, the servants' huts, the school and the kitchen. Nearby built with the architecture since the first settlers: the church, hunter's house, a mill and a forge.

As you remember, with trips on public transport in the city things are bad. On foot, it’s a long walk, and riding a taxi is expensive. So excursions from American Butler will facilitate the study of the sights of Baton Rouge!
Send a request
Also read
Shreveport
Shreveport is the third-largest city in Louisiana, with a population of 2005 km² and 305 km². This is a city of rivers, lakes and ... Casino. So you will have something to do at any time of… Read more
Lafayette
Lafayette is the fourth largest city in the state of Louisiana. At 140 km² live 120 thousand people who love two things: to eat and dance. Read more
Kenner
Kenner is a city in the state of Louisiana. Located on the banks of the Mississippi River, now holds the status of a suburb of New Orleans. 67 thousand people live in it, and the total area of the city… Read more
How to refuel a car in the USA
Читать еще
Buying a home in Miami
Читать еще
Who founded Miami
At the very end of the nineteenth century, when Miami was given the status of a city, only three hundred people lived there. All achievements would have been impossible without active local residents,… Читать еще
American cuisine
Who said that apart from fast food in America, there is nothing to eat? All this is bullshit, American cuisine - the most diverse, nutritious and interesting in the world! One name for the tex-mex direction… Читать еще
Hoover Dam
Hoover Dam is one of the highest dams in the world, and at the same time a powerful hydroelectric power station. Tourists and residents come here to see the incredible scale of construction, go boating,… Читать еще
Craft Contemporary
Craft Contemporary is a building with more than half a century of history, a gallery of folk art. Since Los Angeles has become an important international art center, the Museum of Crafts and Folk Art… Читать еще
Baton Rouge 5 1 0 0
Sharing: