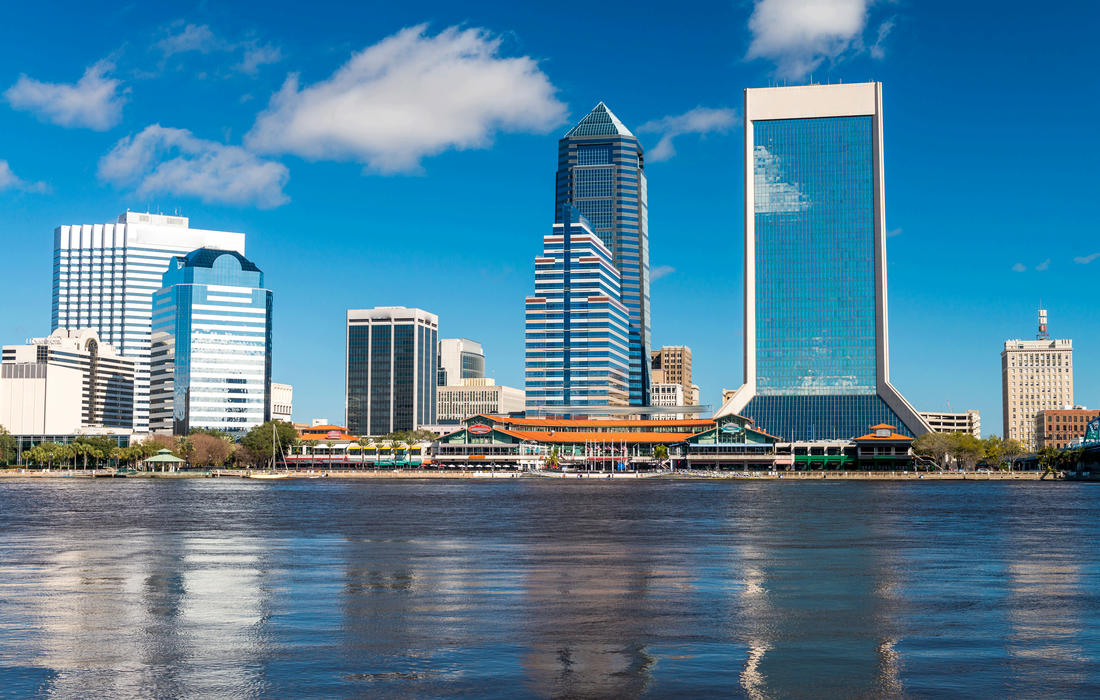 Jacksonville is a large city located in northeast Florida. If your plans include not only recreation, but also obtaining a prestigious education, American Butler consultants will help you prepare an interesting and productive visit to a sunny state. 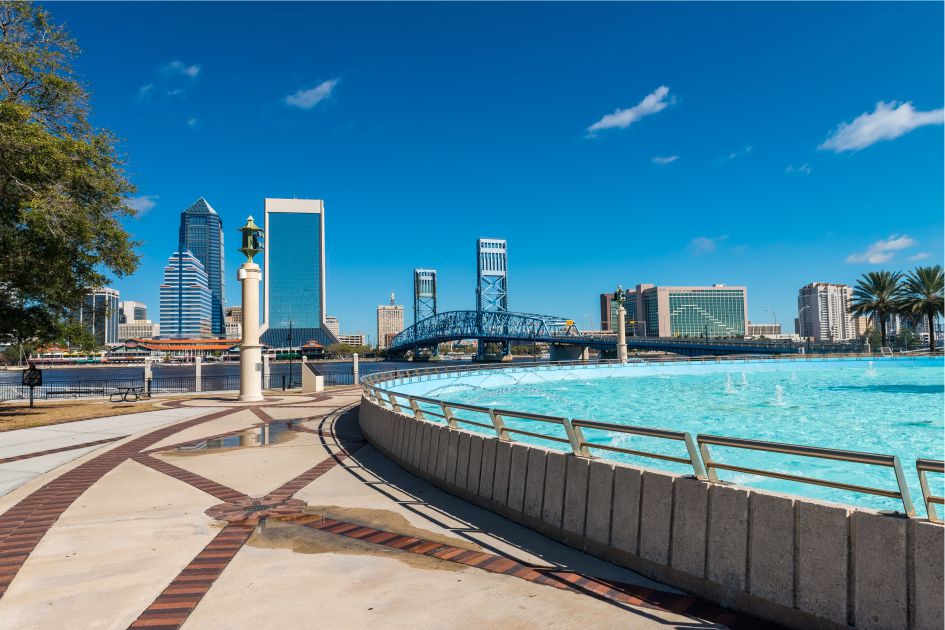 Jacksonville is the largest city in Florida. Founded in 1791 as Cowford, it developed rapidly through trade through sea and river routes. In 1821, Spain transfers Florida to the USA, and a year later the settlement was renamed in honor of Andrew Jackson, the state governor and subsequently the seventh American president.

The city played the role of food supplier for Confederate troops and was often besieged. After recovery, it took the place of the shopping and tourist center of the district. In 1901, a fire at one of the factories destroyed most of the wooden buildings and left more than 10,000 people homeless.

Urgent reconstruction was carried out under the supervision of architect Henry John Cluto and the patronage of the army.

At the beginning of the century, the finance and insurance industry flourished here, in the 40s the army built three naval bases, and in the 60s population began to flow out to the suburbs. City Hall loses the lion's share of taxes on the maintenance of the city, whose infrastructure is rapidly decaying. The problem is solved in 1967 by administrative association.

In the 90s, an infrastructure improvement plan was developed, which is being phased over several years. Thanks to these transformations, Jacksonville is today in the list of the most attractive cities for work and leisure in America. 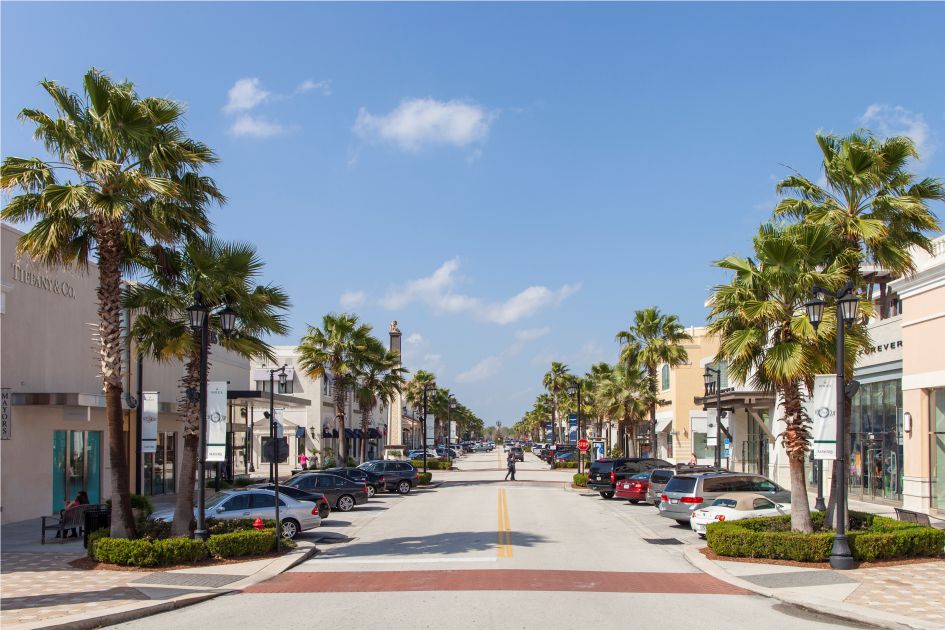 Nature in the center of Jacksonville

Jacksonville boasts the largest and most diverse complex of parks and green areas of the United States - from the city’s zoo and the famous Katti Schaek reserve to forest hotels.

Metropolitan Park on the banks of the Jones River - a place of picnics and folk festivals. There are exhibitions of art, crafts and yachts, as well as a jazz festival, the World of Nations celebration and Independence Day fireworks.

In the charming historical park on the island of St. George restored refined hotel built in the early twentieth century and the adjacent garden. Nearby is the Ribot club, which for the beauty of trees and flower beds is often chosen for wedding ceremonies. The Kummer Municipal Museum of Art is located in a spacious garden, where trees, bushes and fountains are shaped into a picturesque composition.

The vast Arboretum is known for its hilly terrain, lakes, century-old oaks and rich fauna. In this reserve there are a lot of hiking routes and pavilions, and landscape artists love to go here in the open air. 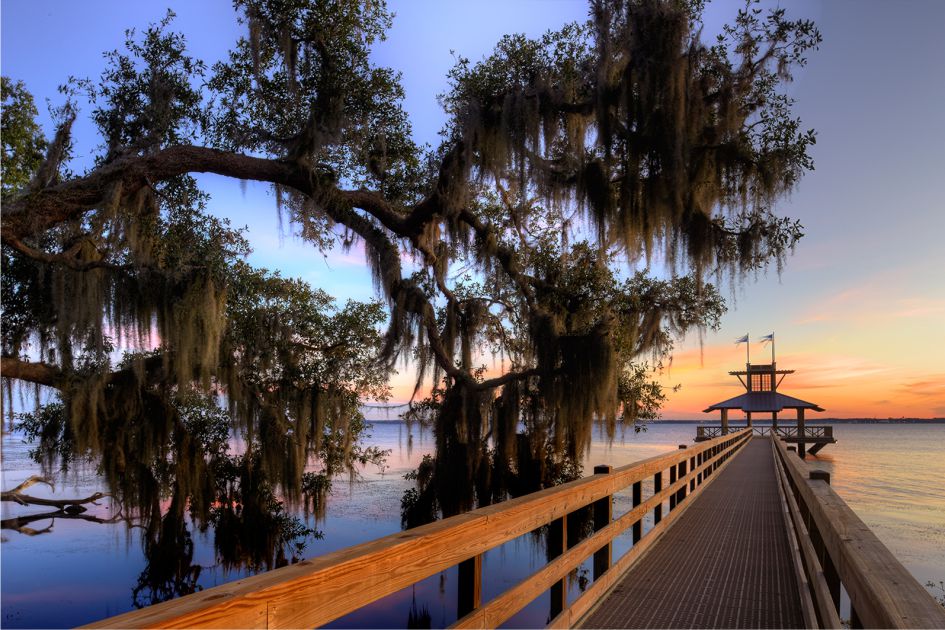 The ocean coast attracts lovers of the waves and diving. You can listen to music in the C-Walk open beach pavilion, go cycling in Katherine Abby Hanna Park, and visit seafood restaurants and water casinos in Mayport. Canoes, kayaks and paddle boards are practiced on the lakes. In the rental stations: boats for sea and freshwater fishing, pleasure boats and yachts. The river taxi runs between the north and south banks, and in the evening arranges live music concerts.

Every year music and food festivals are held in Jacksonville. Jazz and Blues - the historical melodies of the peninsula. Many famous musicians honed their skills in local clubs. So, one of the northern areas of Jacksonville was called "Harlem Blues". In April - a three-day open festival of blues and Rockville, in May - jazz music. On the May holiday of the World of Nations - costumes, rhythms and cuisines of different nations, as well as a solemn ceremony of the naturalization of new US citizens. 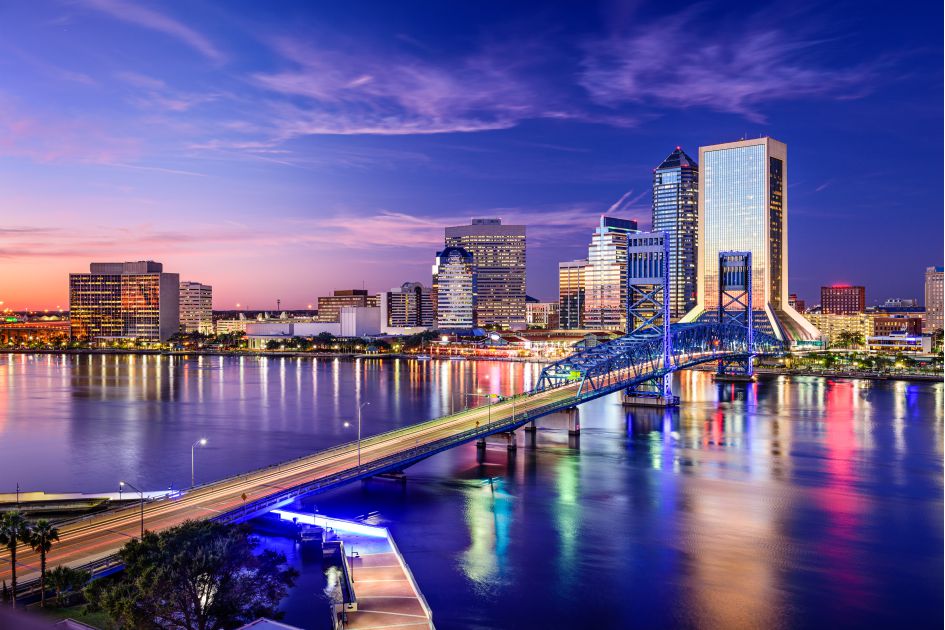 Shopping and Games in Jacksonville

Along with the splendid shops of St. John Town, Avenue and River City Marketplace, Jacksonville also has some non-trivial living courtyards: the A1A Gallery and the cozy Beach Town Passage: a shopping and entertainment quarter full of palm trees. One of the unusual attractions: popular sites role-playing games such as Breakout and Mastermind.

Nightlife rages not only in the modern glass high-rises of Downtown, with panoramic bars and variety shows, but also on the city’s beaches. Lemon Bar is loved by the local public for original cocktails, and the Azuria Restaurant is for fine gastronomic cuisine. Bar Flaine Iguana offers more than one hundred types of tequila, and a gastronomic pub, Po, offers over fifty kinds of beer. A variety of cuisines and home-brewed beer can be found in many cafes in the King Street District, and in the Comedy Club of the zone where stand-up stars perform, you can laugh at good jokes.

Book the most interesting excursions only in American Butler!
Оставить заявку
See also
Coral Castle
Edward Lindskalnin Coral Castle in Florida The unique building, located under the open sky, attracts not only ordinary tourists, but also many scientists. In the castle of Edward Lindskalnin regularly… Read more
Japanese Gardens and Morikami Museum
Walks in the park Morikami Museum and Japanese Gardens will require at least one and a half to two hours to walk around the entire territory. Of course, Morikami Garden in Florida differs significantly… Read more
Miccosukee Indian Village
Location Indian Village in Miami is indicated on the maps as "Miccosukee Indian Village & Airboat Rides". If you move to the west, the settlement is located 30 km away from Miami-Dade. The… Read more
Tallahassee city tour
On the largest hilltop, the center of Tallahassee is equipped along with the Capitol. Beautiful lakes Jackson and Lafayette are located within the city limits. But its main feature is the national natural… Read more
10 traffic rules in the USA
You came to the US and wanted to rent a car, but you doubt the knowledge of the rules of the road in another country? It's okay, there is a way out. Read tips from American Butler! Читать еще
Dental treatment in the USA
Читать еще
American writers
Читать еще
Fast food in the USA
What do you know about fast food? Probably that they do not need to get involved. And rightly so, but in fact the question is much more interesting. Argue that we will break at least 3 stereotypes right… Читать еще
Jacksonville City Tour 5 1 0 0
Sharing: