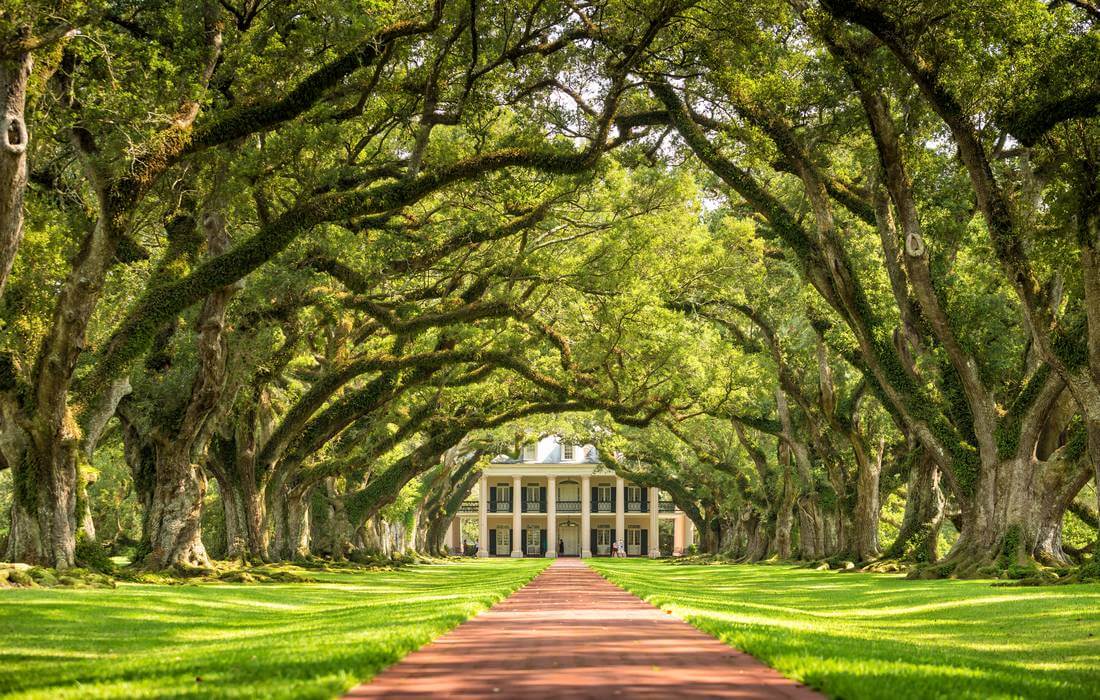 Oak Alley Plantation - a house filled with history, ghosts and beauty. The oldest oaks date back to the late 17th century. The plantation was built a century later - in 1837, on the model of the mansion in the style of the Greek Renaissance.

Originally, the plantation was called Bon Sejour, and its owner, Jacques Thelesfort Roman III, was a very rich sugar cane grower. After the family lost the house during the Civil War, the subsequent owners did not maintain the property as they should.

In 1925, Andrew and Josephine Stuart purchased property, immediately saw its potential and appreciated the rich history. They began a plantation restoration project that would set the trend for the restoration of mansions throughout the south. Only in 1998, a 25-acre plantation will open to tourists.

Features of the mansion and plantation

The mansion has a square layout, organized around the central hall. The rooms have high ceilings and large windows. The exterior is a freestanding colonnade of 28 Doric columns, which correspond to 28 oaks in the alley.

The 16-inch brick walls are plastered on the outside and painted white, and the inside is plastered. The roof is made of slate and originally had four windows, one on each side.

During the restoration in the 1920s, rooms from the ground floor were divided and adapted as a kitchen. The staircase was moved from the southwest corner to the central hall, and the black and white marble floors were replaced with wooden ones.

It is often said that ghosts or spirits linger when they have unfinished business in their lives. If this is true, then Oak Alley should be a well-known meeting place for the deceased. 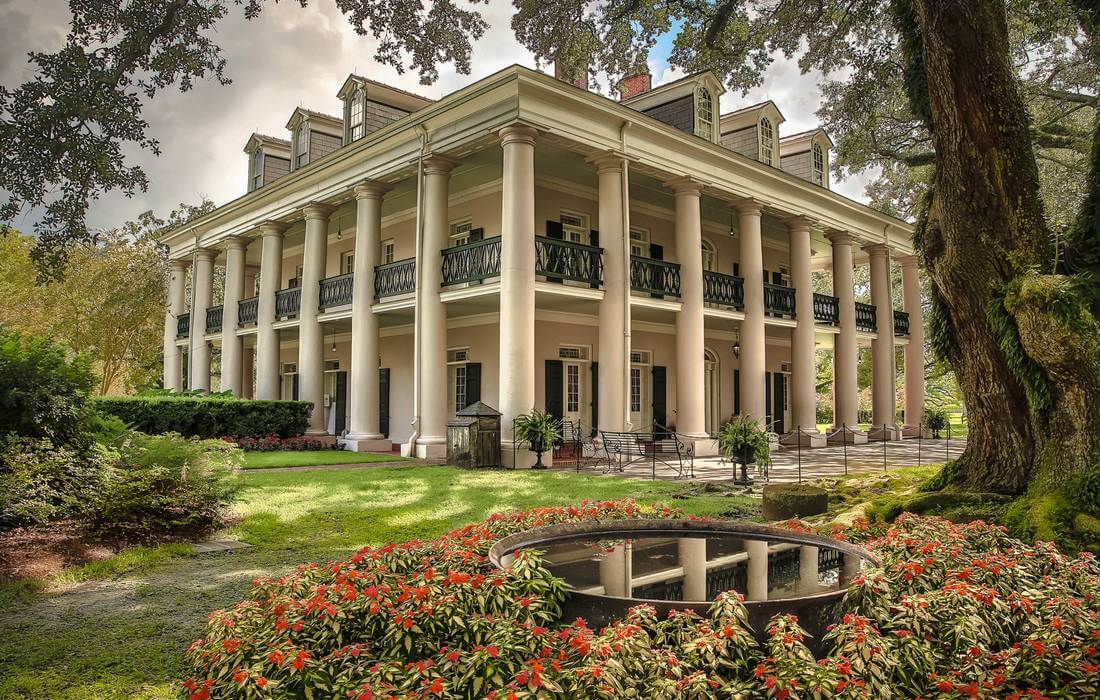 Louise, daughter of Jacques and Josephine, cut her leg, fleeing the groom during a party in the mansion. This cut will develop gangrene and will require that it have a leg amputated. This devastated Louise, since someone in the upper class could not have a disability of this magnitude. She was very upset about her position and devoted her life to serving the Lord, joining the monastery. Before her death, she will return to the Oak Alley, which will be her last refuge.

There were reports that late at night workers often saw the figure of a woman all over the mansion. This lady is said to be either Josephine or Louise. Guides also report that they saw a figure of a man in a gray suit and riding boots. Perhaps it was Jacques Roman III wandering around the house.

Employees often reported seeing a woman sitting on the edge of a bed in her favorite room. After being asked to describe a woman, it was perfect for Mrs. Stewart. Whether these ghosts are in fact former inhabitants of this house or not is unknown, but it is curious that the descriptions correspond to their profiles.

The plantation was also investigated by numerous popular and respected paranormal research groups. Most of the reported “activity” came from plantation staff, claiming that they felt an eerie presence around them while working the night shift. Whether this is just a marketing gimmick is not clear, but let's not forget that the plantation still remains an impressive and atmospheric place. 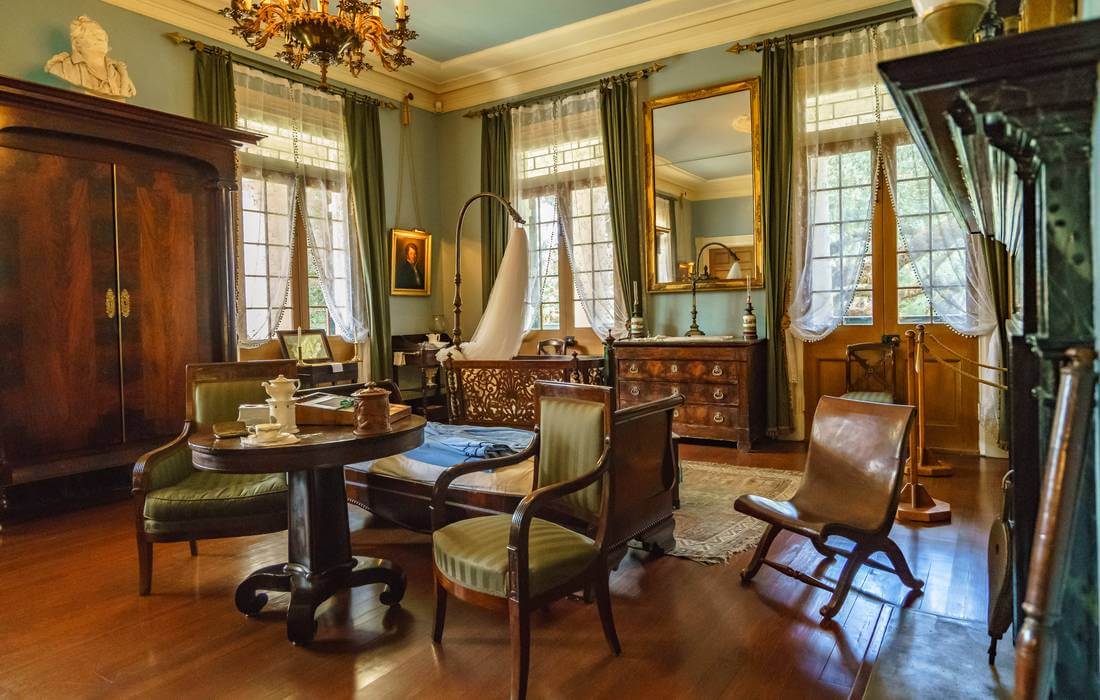 Before entering the mansion, stroll through the grounds and admire the breathtaking scenery. Be sure to look at the garden that has been blooming since the 1920s, tall oaks and think about how life has changed since then.

The mansion, as well as many outbuildings - this is an incredible sight! Take a tour of the beautiful home in the style of the Greek Revival.

The plantation staff and historians have made tremendous efforts to assemble a comprehensive and authentic collection of artifacts characteristic of the local history. Most of the collection is works of art, books and paintings of Josephine Stewart herself. One of her favorite tea sets, often used to serve many guests visiting the Oak Alley, is also on display.

Other cultural artifacts - bricks found during excavations, fragments of handmade pottery and other small things will help guests to get an idea of what life of the people who worked there could be like.

Visit "Oak Alley" with American Butler - we will organize a tour for you at any time!

Book the most interesting excursions only in American Butler!
Оставить заявку
See also
Excursion to the Spy Museum in Washington DC
Why are spies and exactly worth visiting? How could it be otherwise when the USA is the world center of intelligence? This country spends a lot of money, uses state-of-the-art technologies and does not… Read more
Seaplane tour in Miami
Where to fly on a seaplane Discovering new places and exploring colorful Florida or California can take place in a very non-standard format - on board a hydroplane. In Miami, like San Diego, for example,… Read more
Tour of Downtown Manhattan
Many people think that Downtown is somewhat worse because it is “lower.” In reality, everything is completely wrong - several of Manhattan's main facilities are concentrated here, there… Read more
Evening New Orleans Tour
How will the tour go The origins of jazz can be seen while strolling through Louis Armstrong Park. Embark on a historic journey through less visited areas, on foot or by tram. Visit Frenchmen Street and… Read more
10 traffic rules in the USA
You came to the US and wanted to rent a car, but you doubt the knowledge of the rules of the road in another country? It's okay, there is a way out. Read tips from American Butler! Читать еще
Dental treatment in the USA
Читать еще
American writers
Читать еще
Fast food in the USA
What do you know about fast food? Probably that they do not need to get involved. And rightly so, but in fact the question is much more interesting. Argue that we will break at least 3 stereotypes right… Читать еще
Oak Alley Plantation tour 5 1 0 0
Sharing: