The diverse and extremely colorful history of the Florida Keys archipelago is full of adventure. From Indians, Spaniards and pirates to hurricanes and numerous shipwrecks , these islands have always been a place to explore. Let's begin our journey ...

These islands are the birthplace of the Calus Indians. In 1513 the Spanish expedition led by Ponce de Leon came in search of the Source of eternal youth and deposits of gold. But they eventually found only Indians. And many, many insects. 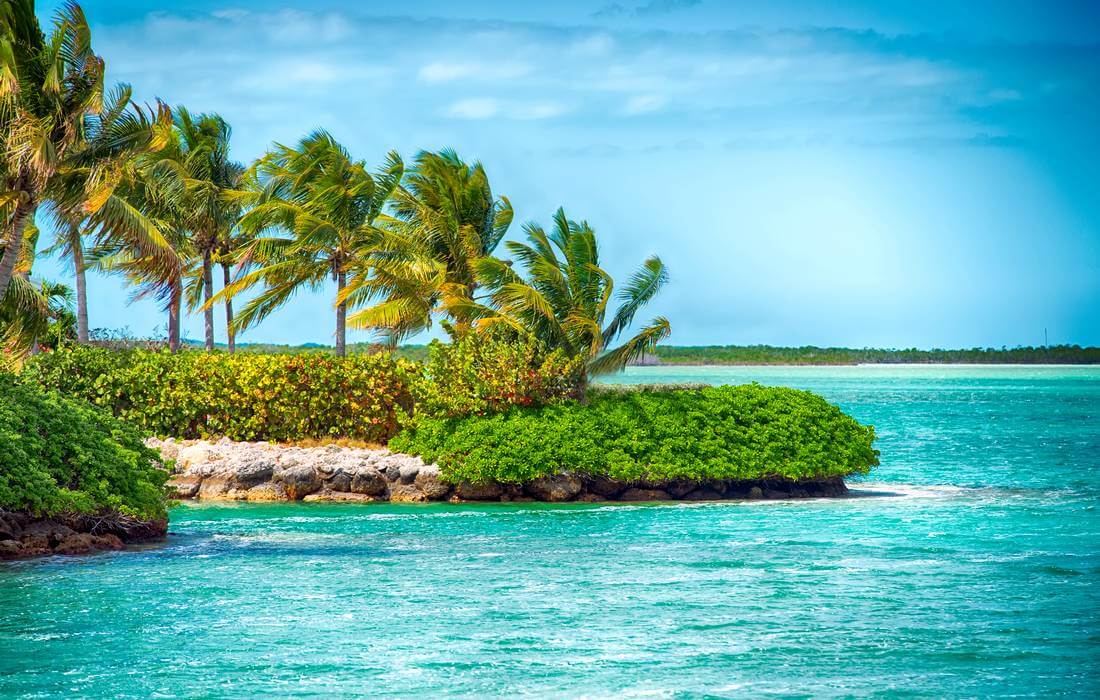 It is believed that they enslaved the tribe, cut down the trees, and then did not find any other use for these islands, except to make the islands on the map for their ships traveling between Central America and Spain. Many of these ships crashed on reefs, which gave future adventurers and divers a rich treasure trove.

The Spaniards later called these island chains "keys", from the Spanish word "cayos", which means "small islands". So the name that we know now as Florida Keys appeared.

In 1812, all of Florida officially became the territory of the United States. But only in 1822 the settlers began to arrive here. Dodging pirates who flooded these waters, the settlers found not only fertile fishing grounds, but also got rich from the salvation of sunken ships. Florida has incorporated the archipelago into its possession. in 1845.

In 1905, Henry Flagler began to expand his railway from the manor through the Everglades to Key Largo. Seven years later, after many deaths and deprivations, this railway was finally completed up to Key West, the most popular island of the archipelago. The railroad allowed to ship through products from the Caribbean.

1935 Hurricane swept through the islands, destroying agricultural communities and tearing the short-lived railway to pieces. It is documented that with a wind of 200 miles per hour and a tidal wave 18 feet killed over 800 people. For the next three years, the shipments only went by boat. However, in 1938, the motorway opened, which is still the main link to the mainland.

The waters of the archipelago store many historical discoveries. Florida Keys contains numerous remains of ships, from Spanish galleons to cargo ships of the Second World War. In addition, there is the only US coral barrier reef, and it is also a home for tropical fish, which in itself makes this historic place even more exotic and worthy of preservation. 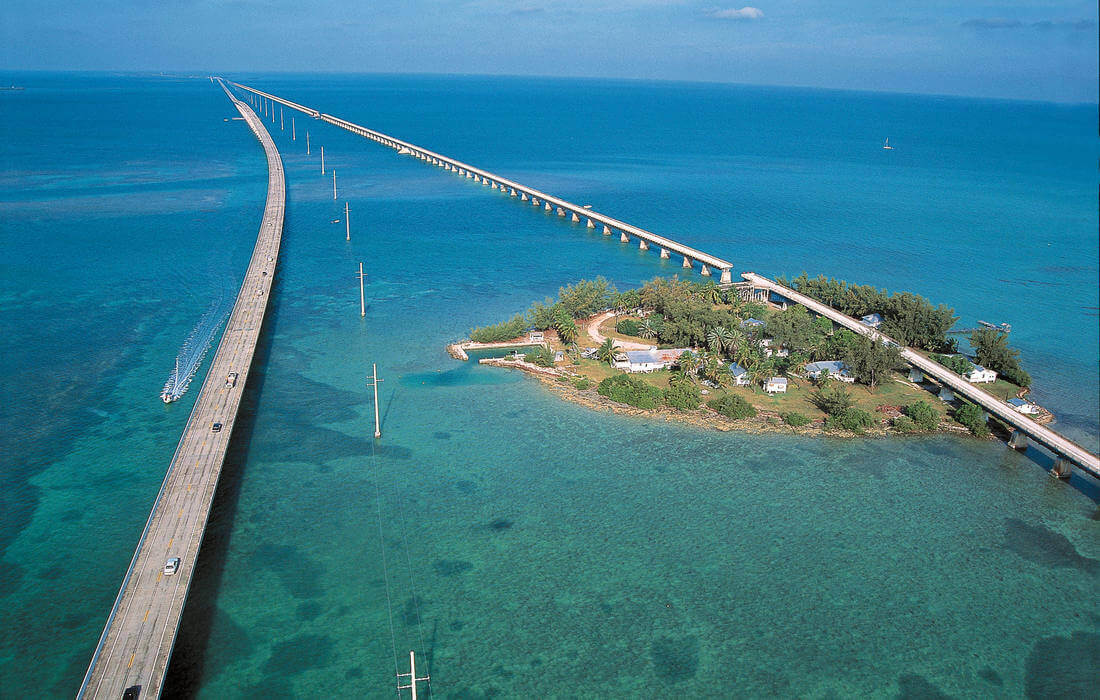 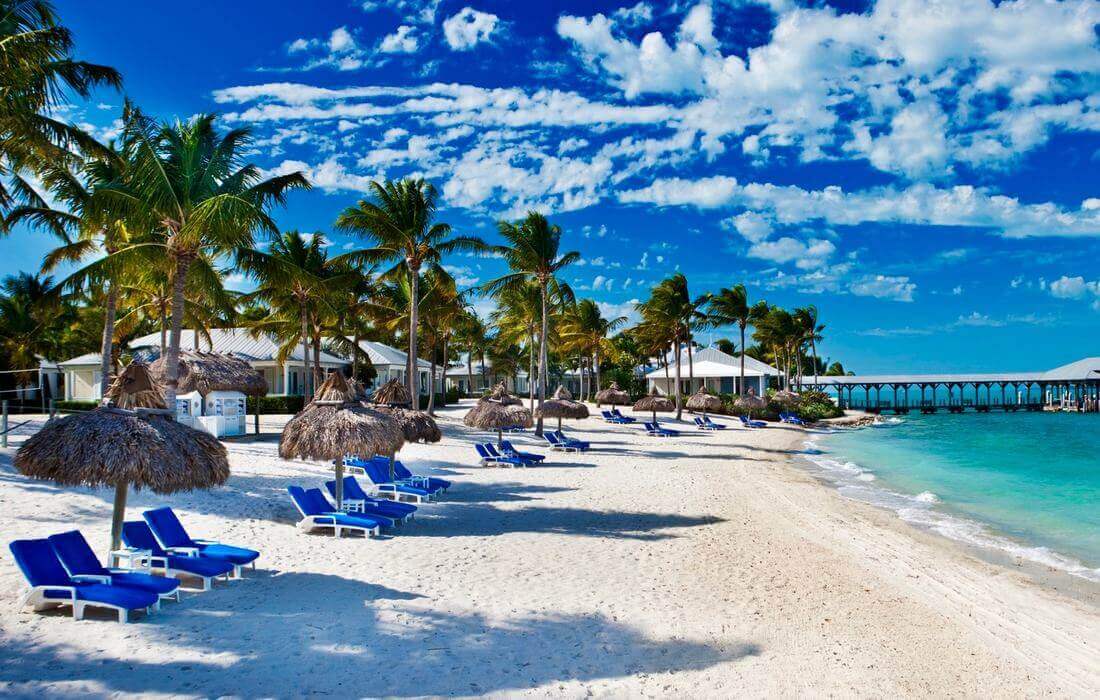 The lively area in Key West, which is best known for celebrating the sunset. Every evening, people gather to create a festive atmosphere, while tourists admire the legendary sunset over the Gulf of Mexico. You'll find an interesting mix of performances, from tightrope cats and unicycle dogs to swallowing a sword and juggling with fire.

Greenhouses provide visitors with the opportunity to wander among 60 species of butterflies, which freely hover among the habitat filled with plants, accompanied by more than 20 species of exotic birds.

Visitors will learn about the life cycle of butterflies at the training center, where you can watch a 15-minute training film, see various exhibits, and see live caterpillars at all stages of the life cycle.

The best beach in the archipelago and one of the most beautiful beaches in Florida. It has two separate beach areas: one large section overlooking the open ocean, and the other a smaller one, it is located on the side of the old railway. The views are impressive on both sides.

The beach occupies 400 acres and offers scuba diving on the boat, as well as beach equipment hire. Camping and picnic areas are available.

Visit the archipelago with American Butler - we will organize excursions for you and find a guide.
Send a request
Also read
Amelia Island
The island of Amelia, located near the coast of northeast Florida, is easy to reach, but hard to forget. 13 miles of beaches, wildlife and pristine waters - this barrier island rightly became a favorite… Read more
Anna Maria Island
Anna Maria Island is a barrier island along the Gulf Coast of Florida, about an hour from Tampa Airport. Families from all over the world come here to enjoy the beaches, atmosphere and weather. Read more
Siesta Key
Siesta Key is a small, relaxing beach town in Florida. Here you will visit museums, circus, musical performances, theaters, film festivals, botanical gardens and get acquainted with wildlife. Read more
Marco Island
It is incredible to realize that the Marco Island was previously sparsely populated and undeveloped. How did it happen that this boggy island covered with mosquitoes turned into the pearl of Florida? Read more
Tips for tourists in USA
Читать еще
How does recycling work in USA
10 years in prison for dumping trash? Easily, if you threw the packaging from under the laundry detergent in the tank for food waste. More recently, Americans did not want to dig in the trash, but now… Читать еще
Who is Elon Musk
Do you know who Elon Musk is, where he grew up and what does he do? What has he done useful and what plans to achieve? Read more in the article about one of the most famous entrepreneurs of our time. Читать еще
Fast food in the USA
What do you know about fast food? Probably that they do not need to get involved. And rightly so, but in fact the question is much more interesting. Argue that we will break at least 3 stereotypes right… Читать еще
Hoover Dam
Hoover Dam is one of the highest dams in the world, and at the same time a powerful hydroelectric power station. Tourists and residents come here to see the incredible scale of construction, go boating,… Читать еще
Craft Contemporary
Craft Contemporary is a building with more than half a century of history, a gallery of folk art. Since Los Angeles has become an important international art center, the Museum of Crafts and Folk Art… Читать еще
Florida Keys 5 1 0 0
Sharing: