There are almost as many restaurants in New York as there are people. You can try to visit everything, but why, if you can visit only the best? In the review of American Butler 5 top restaurants of the Empire State. 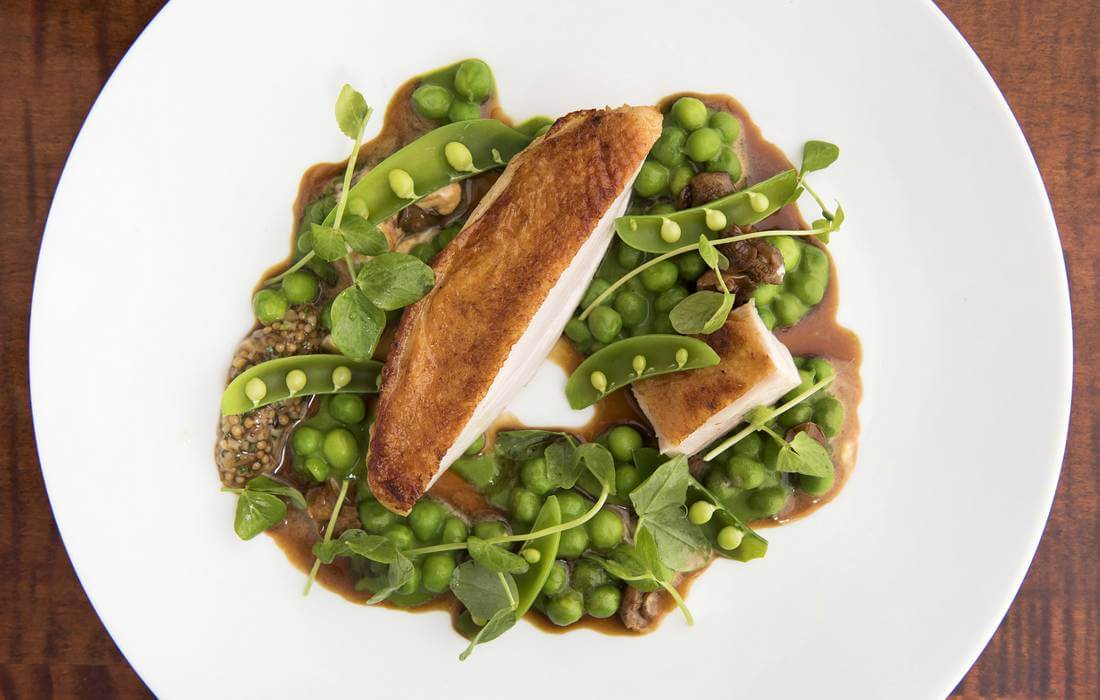 What and where to eat

Before reviewing the best restaurants, we ’ll give general recommendations on finding places with delicious and high-quality food.

Fast food is a couple of times. Eating burgers all the time is not only harmful, but also simply annoying. Cheapness is deceptive - the feeling of hunger after such snacks will only get stronger. Therefore, it is not worth much to rely on them, it’s more expensive.

The most reliable option for budget meals is local ethnic restaurants.

A striking example is Chinatown with countless Chinese cafes. Also on the streets you can find Italian, Mexican and Middle Eastern cuisine.

In the ranking 50 best restaurants of the planet 4 - New York. Find gourmet cuisine no problem. And often these restaurants are located in the buildings of hotels, so in advance scout the situation on the map. Most of them in the center of Manhattan, as well as along the banks of the Hudson River and the East River.

We have collected the top 10 best restaurants in New York from different price and taste categories to make it easier for you to navigate on the spot.

A restaurant of high French cuisine, entered just in the fifty of the best in the world and received 3 stars of the Michelin Guide. Price tags, of course, are considerable - the average lunch will cost $100-150. But many eminent chefs consider this restaurant a must-see, and guest reviews only confirm this.

Le Bernardin is located in the west of 51st Street. There is no dress code as such, but in jeans and you should not come with a backpack, the pleasure will be completely different - yet this is a place for aesthetics. 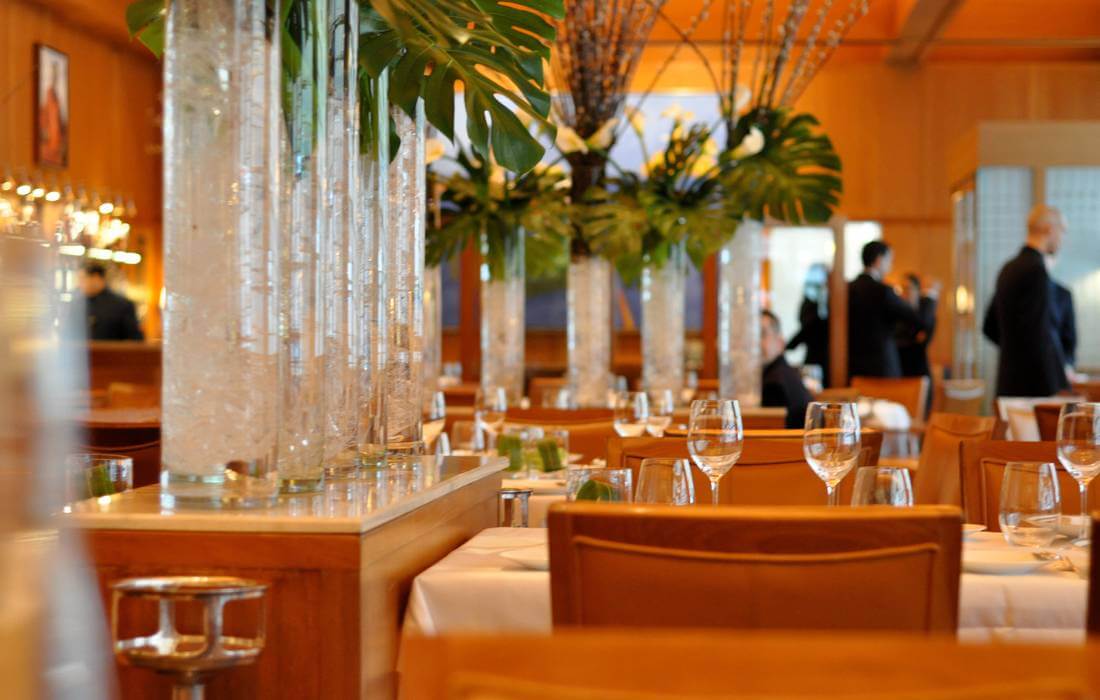 Contender for the title of the most comfortable and atmospheric restaurant in New York! The building has two glass panoramic walls with wooden frames, nice and some very warm interior and nice looking lighting. Fits perfectly into the previously industrial, and today the creative area of SoHo.

The restaurant is small, so a table should be booked in advance. In addition to the full menu, the institution has a very good wine list.

The most budget and incredibly tasty option is an Italian deli with its own kitchen. Here you can buy delicious Italian products at low prices, as well as the owners can prepare you a snack.

According to many tourists and locals, this is the best steakhouse in all of Midtown. If you like meat, but at the same time are very picky, they will surely cater to you here. Meat is served with standard American appetizers - fried potatoes, corn, salads with thick sauces.

On average, a bill for a hearty lunch or dinner for one person will be $50-70 plus tips. The restaurant is located on the east of 58th Street.

Fish lovers will also have something to do. This establishment is also a store where you can buy any fish and spawn excellent quality. But bagels and fish sandwiches, smoked and salted fish with snacks, hot fish dishes, freshly baked bread and homemade cheeses are also sold there. 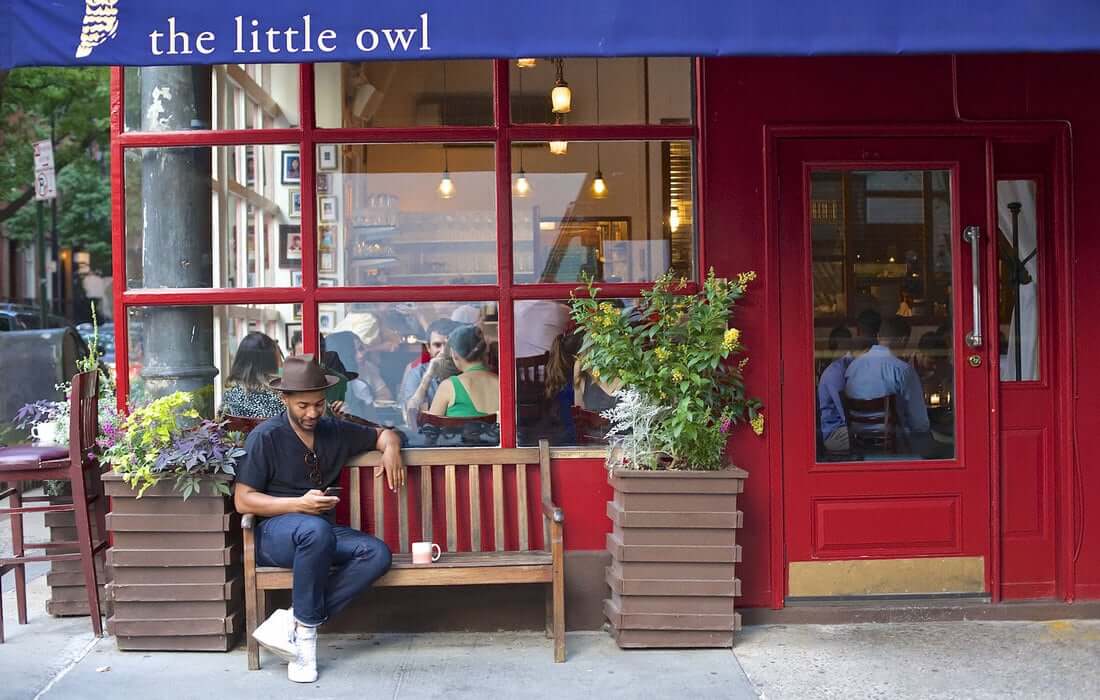 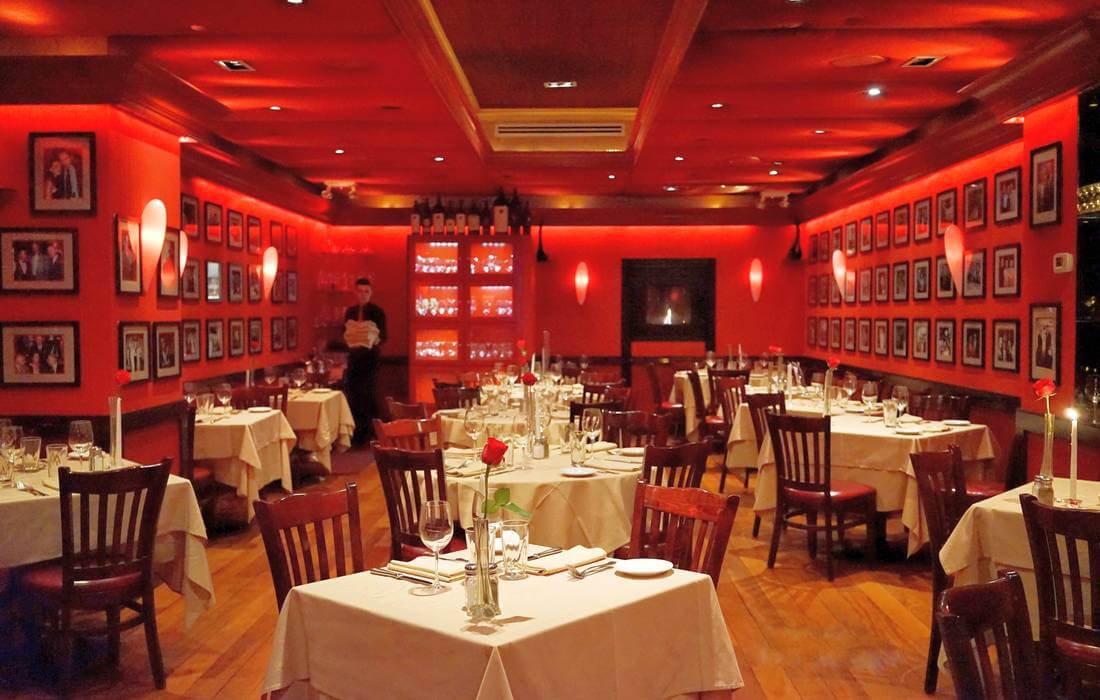 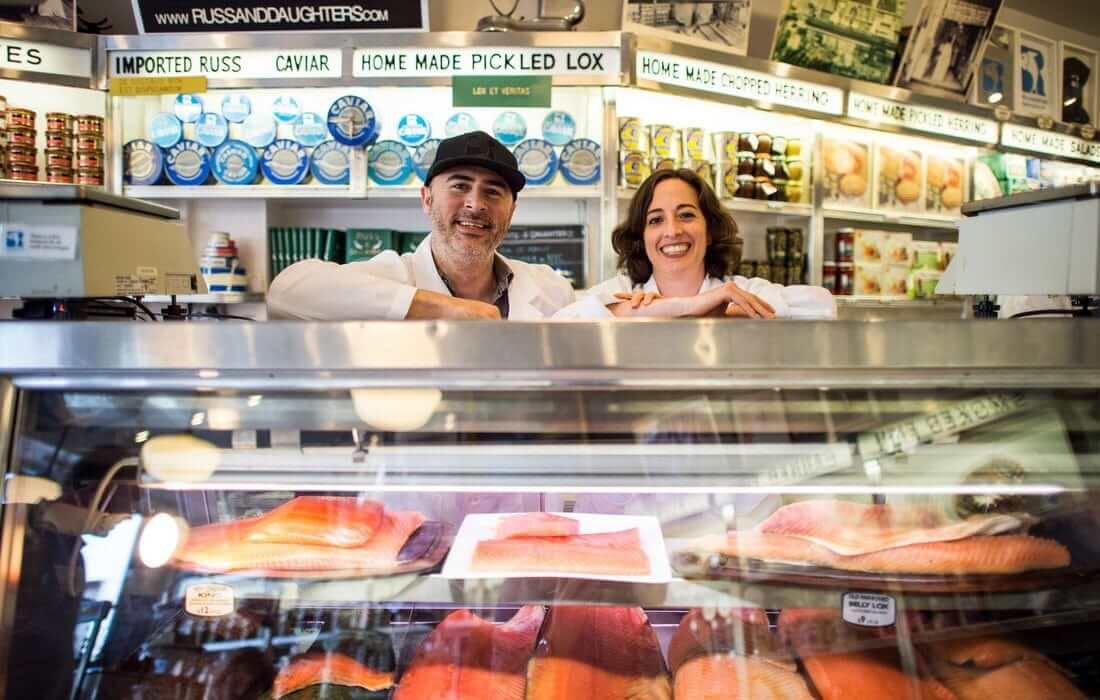 The most inaccessible, expensive, but at the same time the best restaurant on our list. 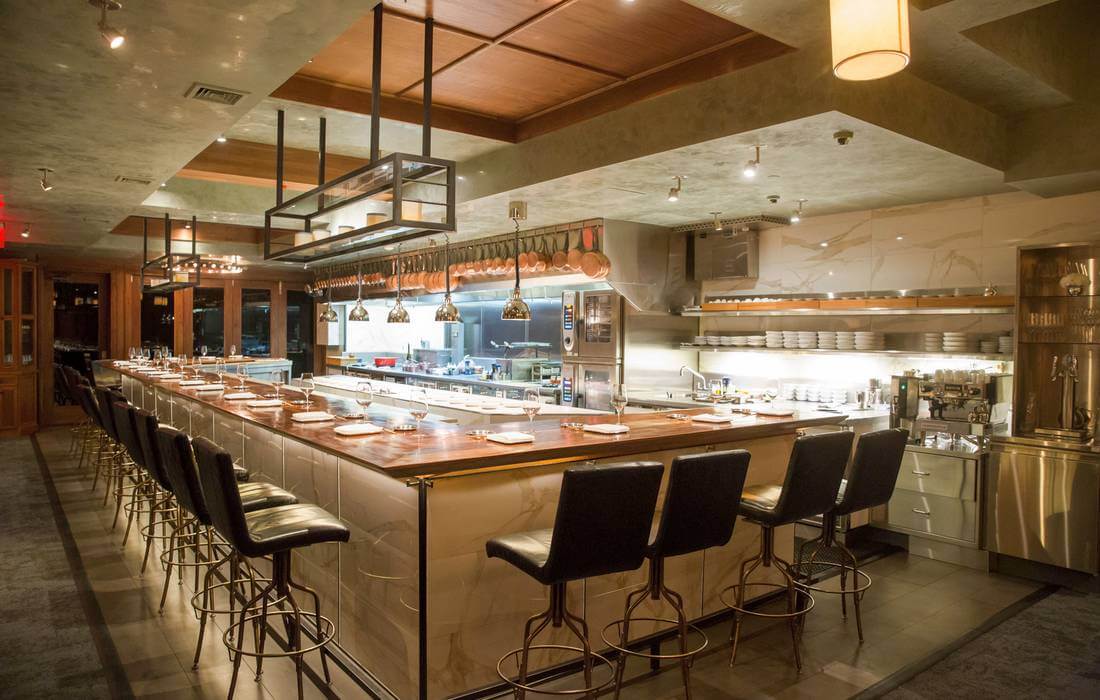 Chef Cesar Ramirez and his colleagues have created a restaurant that surprises by its design alone. The interior is minimalistly furnished: polished surfaces, steel, glass and bright lamps reign here. In the center of the hall is a giant table in the shape of the letter “D”. A maximum of 18 people sit behind it, and there is a stove at the far end of the table where the chef himself conjures.

French and Japanese dishes are served here, fish and vegetarian foods prevail. Bring alcoholic drinks with you - they do not serve him here, although you have a sommelier. Average price tag - $200 per person.

Since there are few places in the establishment, you will have to sweat in advance with your reservation - people take their places a few months in advance.

The restaurant was founded by a native of Russia, Mikhail Zelman. The idea is simple - the institution serves only burgers and lobsters. This approach will help bring each recipe to the standard, and not to do everything, but somehow average.

As usual, there is a nuance. Previously, the concept and the truth was so simple - you have two dishes, both cost $20, the choice of torment especially tormented nobody. Now the principle remains the same, but the variations have become much more:

The approach to cooking the level of the Michelin restaurant - lobsters are caught in the wild from the ocean, and then hardened in giant aquariums right in the restaurant.

Do not go there very very hungry - otherwise you will die in the queue. Closer to the weekend, especially in the evening, you can order something only by standing in line for an hour and a half. But cook there quickly - in the region of 5 minutes. But the waiting time will brighten up the staff of all sorts of nations - Zelman loves cosmopolitanism.

Layfkhak - in the menu there is a secret burger. Just call the waiter the phrase "The Original Burger, but California Style" and he will understand. 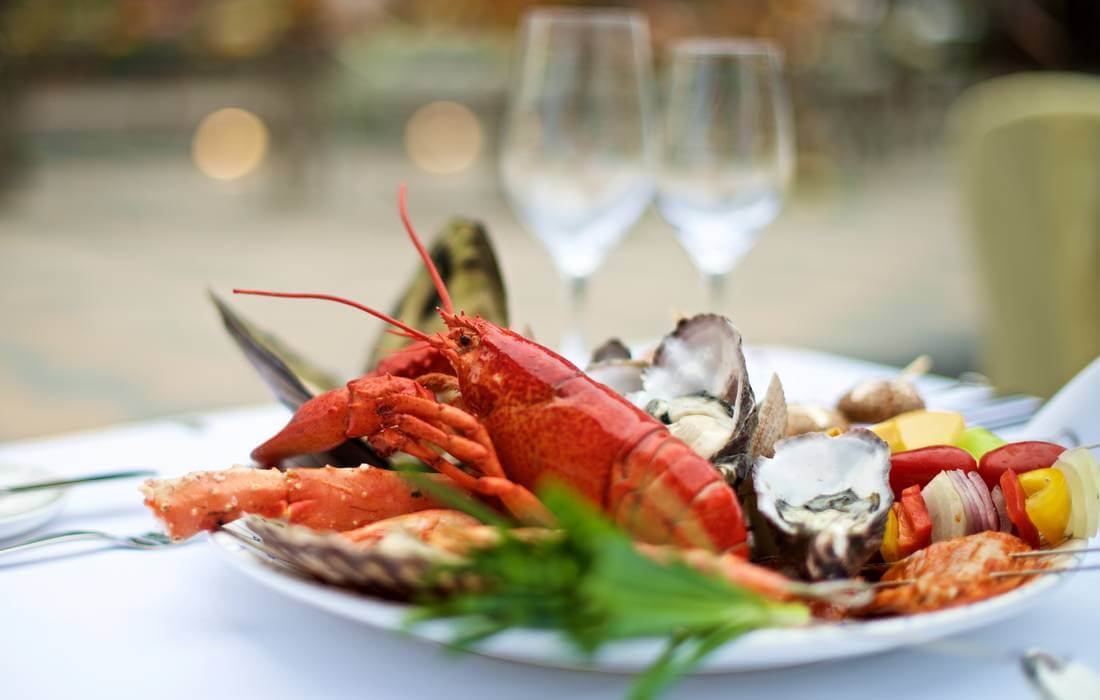 Here we are dealing with a fast food restaurant. But this is not Burger King or Subway, health is taken care of here - only salads in the menu.

Sweetgreen was founded in 2007 three graduates of Georgetown University. In just 10 years, a small institution has become a whole network of 77 restaurants.

The guys are known not only for their salads, but also for music festivals. Suddenly, yes? In 2015, they even collaborated with rapper Kendrick Lamar, calling salad after his songs. The result - a hundred articles about it, sales jumped sharply, and 10% of the proceeds went to the FoodCorps health food fund.

The price tag for a portion is around $10. For this money you will receive an impressive portion that will replace a full meal.

You can choose dishes both from the menu and improvise - to create something unique based on those components that are. There are both vegetarian ingredients and familiar meat with fish. And they have unusual lemonade - from jasmine to chamomile. I ordered once - and then you can infinitely add.

It was founded in 1994 by Danny Meier. He became famous for holding a network of various restaurants. And Mayer - a zealous opponent of the tip. He considers tipping the main obstacle in the development of the restaurant business, as cooks, porters and hostesses do not receive a share, which undermines teamwork. Well, burdening customers with unnecessary expenses is indecent.

Gramercy Tavern also adheres to this ideology. The point of the restaurant is that the menu here consists of two blocks: Seasonal Tasting Menu and Vegetable Menu. Blocks are divided into three sections:

The composition of the blocks changes every season, the chef is personally responsible for its filling. A full-fledged dinner from several “courses” will cook for an hour and a half, so please be patient. For each dish for only $49 will be served its own variety of wine, selected by the chef. The portions are small. The average check is $100.

An interesting feature - you will not hear the music here. She does not play at all. Plus it or a minus, solve. 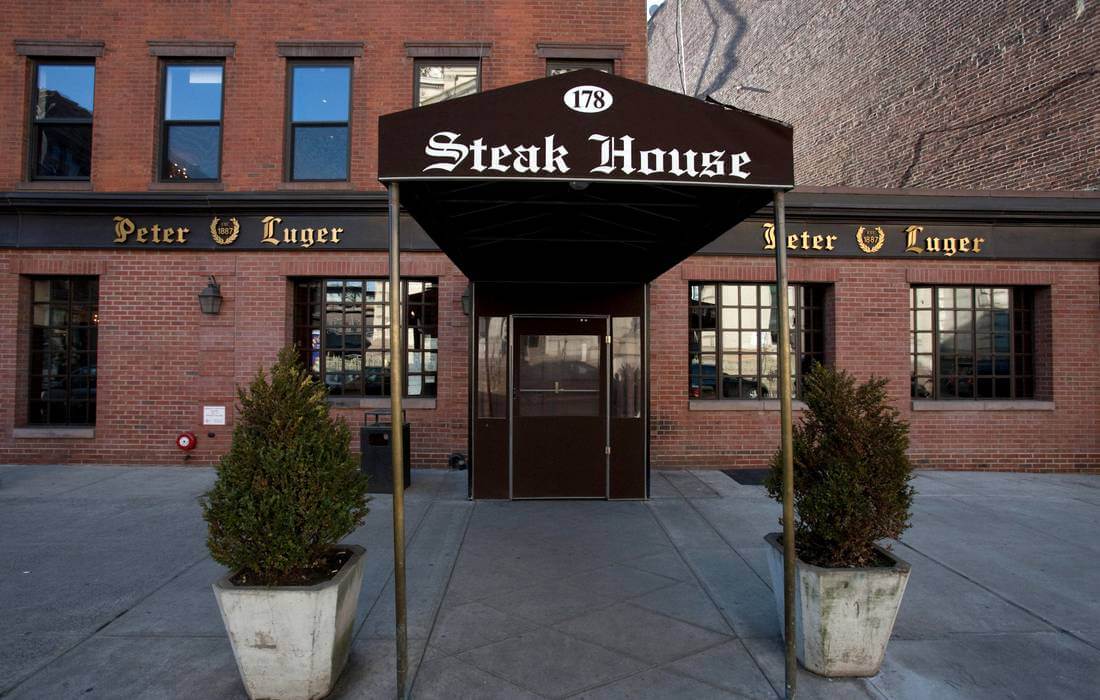 The history of steaks dates back to ancient Rome. In temples, as an offering to the gods, the priests grilled large cuts of beef on the grill and laid them on the altar.

Since then, attitudes toward steaks have changed several times, but it has finally been recognized as a full-fledged dish only in medieval Britain. In the 15th century, Columbus brought cows and gobies to the New World - this was how the national cult of the steak in the USA originated after centuries.

Today, America has become the leading exporter of beef, and its production is controlled by the state. The livestock are fed up conscientiously, veterinarians monitor his health, and only professionals are slaughtered.

And in such conditions, the birth of a steakhouse is a matter of course. Peter Luger Steak House founded at 1887 and since then he has not received any awards, including Michelin stars.

Steaks are not cheap, so the prices are appropriate. Get ready for the fact that in one portion you can easily roll away from $50 in cash - cards are not accepted here.

There is a wine list (vino worth at least $60 per bottle), served with steak, sauce, spinach and chips. There are other options in the menu, but who comes after them, right?

The list of restaurants can go on forever, but we prefer an individual approach. Contact us any way you want, and we will advise you on the most suitable gastronomic points on the map of New York.

Specialists from American Butler will be happy to help with other questions - we will organize the best leisure in the USA.
Send a request
Also read
New York Parks
Parks of New York are known to the whole world. Although it would seem, what can surprise parks? Greens and greens, nothing special. But not in New York - here it is different. And so that you understand… Read more
New York Museums
The museums of New York are entire cities in the city. Each of them is unique in its own way. And there is no museum dust, boring exhibits and “do not touch it with your hands”: everything… Read more
Festivals
Like any big motley city, New York has its traditions and loves holidays. Their most favorite form is festivals. There are a lot of them here - from the mass celebration of the Chinese New Year to restaurant… Read more
Sights
The sights of New York are so steep and plentiful that it’s better to lay them off for a week or two to visit them. And about those that should be covered in the first place - in our material. Read more
Tips for tourists in USA
Читать еще
How to get a mortgage in the US
Planning to buy property in the US, but you do not have enough money to buy a long-awaited home? You can ask for a mortgage loan in one of the US banks. In order to know all the conditions and rates,… Читать еще
Al Capone Story
The world is full of atrocities at all times, but the 20s years of the 20th century became the most cruel and riotous for America. But the times of Prohibition and the Great Depression turned out to be… Читать еще
Waterview restaurants in Miami
Do you want to enjoy lunch or dinner in one of the best restaurants in Miami, but a beautiful view of the sunset or the water is a very important criterion. Read our article about a dozen restaurants… Читать еще
Hoover Dam
Hoover Dam is one of the highest dams in the world, and at the same time a powerful hydroelectric power station. Tourists and residents come here to see the incredible scale of construction, go boating,… Читать еще
Craft Contemporary
Craft Contemporary is a building with more than half a century of history, a gallery of folk art. Since Los Angeles has become an important international art center, the Museum of Crafts and Folk Art… Читать еще
New York City Restaurants 5 1 0 0
Sharing: