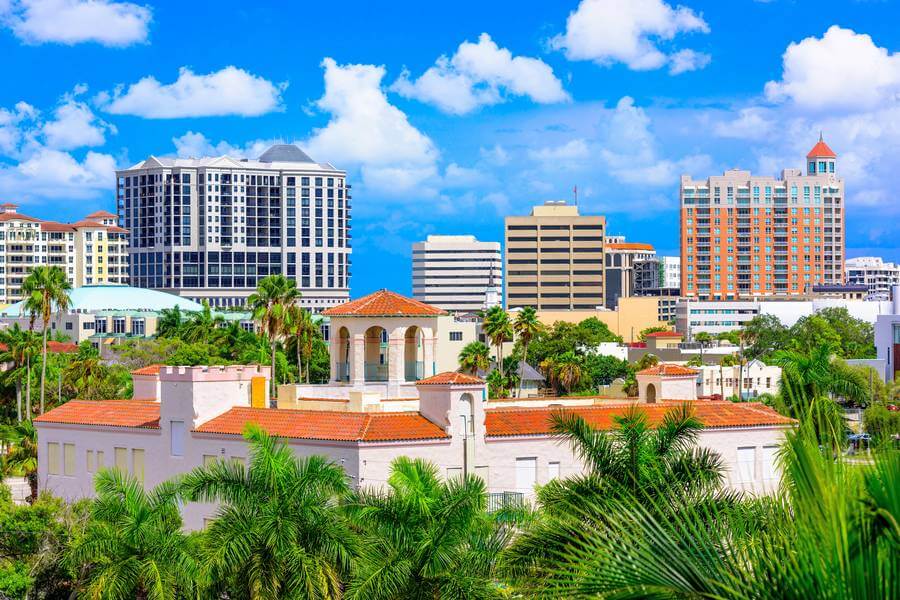 Sarasota is known for its island beaches, architectural monuments and rich cultural life. This sister city of Vladimir begins its history in the 16th century, when the Spanish conquistador Hernando de Soto christened the lands of the southern part of the Gulf of Mexico "Zara Soto", or "radiance of Soto". 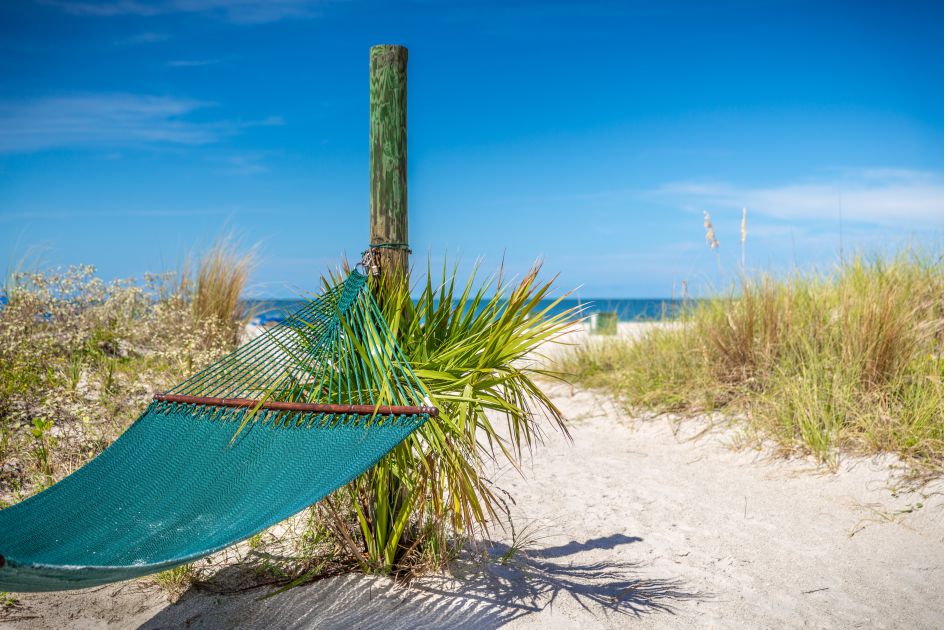 The territory passed from the Spaniards to the British, then back to the Spaniards, and finally was finally assigned to the young American state in 1819. Indian reservations were replaced by European populations by 1840.

At the beginning of the twentieth century, Florida led an administrative redistribution, and in 1921 the young city of Sarasota became the county seat. Dealers and land magnates constantly change the boundaries of the city, but in 1925 the urbanist John Nolen streamlines the cadastral confusion with the help of a new master plan, and the city develops evenly.

The city bay is separated from the Gulf of Mexico by a chain of islands, which are called "keys" here. The territory of Sarasota includes 6 islands: St. Armand, Otter, Coon, Bird, Siesta and Lido. All of them are known for their turquoise white sand beaches, high-class hotels and restaurants with a variety of cuisine from the freshest dishes. The islands are a favorite place for weddings, photos from which can compete in attractiveness with postcards.

Each of the islands has its own personality: Lido is more "chamber" and relaxed, Sant'Arman is known for its "ring": a roundabout with a park in the center and shopping arcades with cafes, restaurants, tobacconists and kiosks of homemade ice cream and chocolate. Bird is decorated with exotic birds and luxurious villas, while Siesta Island is decorated with art and craft galleries. 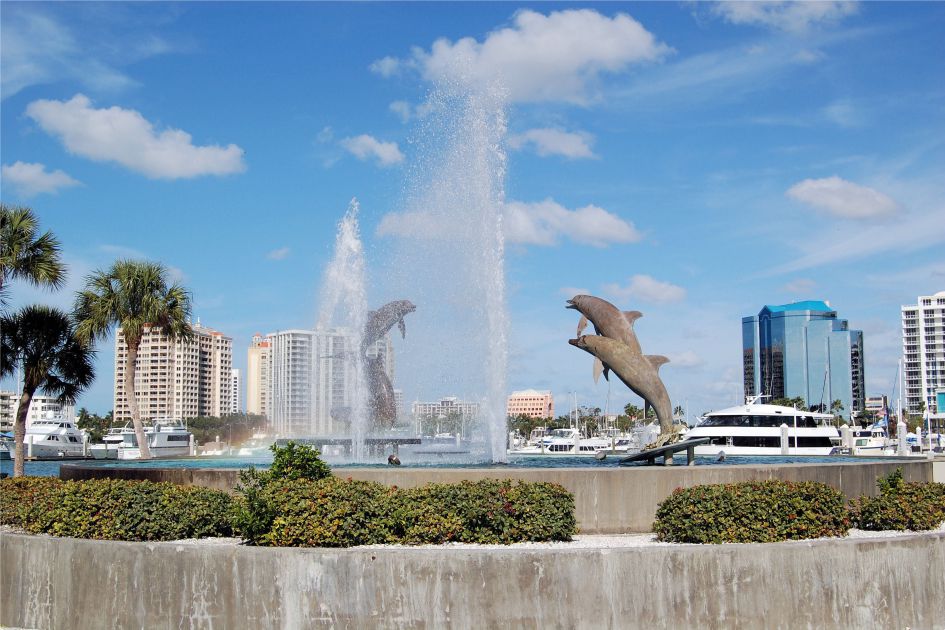 The emblem of the city is Michelangelo's David. This choice reflects the city's reverent attitude towards the arts, among which music and architecture occupy a special place.

Sarasota is known for the performances of its symphony orchestra, opera and ballet, the repertoires of the Asolo Theater and Florida Studio Theatre, as well as numerous theater companies. Acting is held in high esteem and taught at the department of the University of Florida and the Aloso Conservatory. The theater stage is complemented by film festivals, street art and contemporary art.

Two dissimilar styles coexist in the architecture of buildings in Sarasota: the Venetian Renaissance and modern structuralism. Fashion for exquisite facades in the Venetian style began with the construction of the Villa Ca d'Zan — the winter residence of the famous businessman John Ringling. Today, the villa hosts thematic exhibitions, theatrical and musical performances and club meetings.

In the second half of the 20th century, Sarasota architects developed a distinct style: an adaptation of constructivism to the humid tropical climate. This symbiosis gives rise to elegant and eye-catching ensembles that blur the boundaries between indoor and outdoor spaces. In 1966, innovative architects create their own school and successfully combine private practice with government orders. 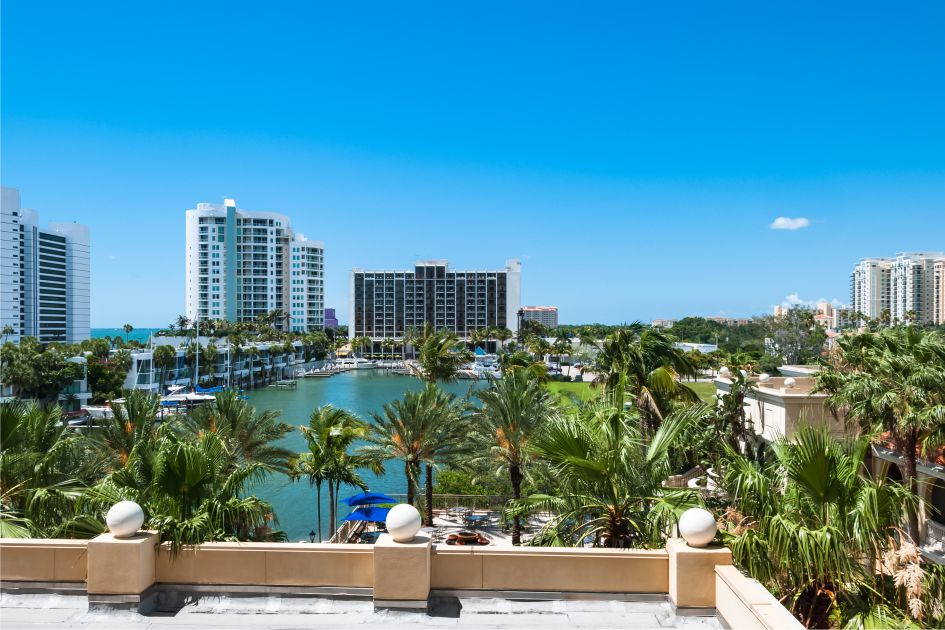 Outdoors and in the City of Sarasota

The city is bustling with life. Palm Avenue is the center of art galleries, antique and souvenir shops. Main Street is home to numerous art festivals and is also known for its farm produce market.

For those who want to start creating with their hands, there are many courses in Sarasota: School of Glass, Cove Studio, Renaissance School, dance lovers can take classes at the Empire Ballroom and Sarah Dance studios, and American Butler will make you the best vacation program of all. this city.

Book the most interesting excursions only in American Butler!
Оставить заявку
See also
Tallahassee city tour
On the largest hilltop, the center of Tallahassee is equipped along with the Capitol. Beautiful lakes Jackson and Lafayette are located within the city limits. But its main feature is the national natural… Read more
Jacksonville City Tour
Jacksonville history Jacksonville is the largest city in Florida. Founded in 1791 as Cowford, it developed rapidly through trade through sea and river routes. In 1821, Spain transfers Florida to the USA,… Read more
Coral Castle
Edward Lindskalnin Coral Castle in Florida The unique building, located under the open sky, attracts not only ordinary tourists, but also many scientists. In the castle of Edward Lindskalnin regularly… Read more
St. Petersburg City Tour
Features and history of the American St. Petersburg Among the variety of proposals is the city of St. Petersburg in Florida. The task of the traveler is to choose a worthy tour operator who will help… Read more
Decorated Christmas Cities
Читать еще
Buy car in the USA
Читать еще
Al Capone Story
The world is full of atrocities at all times, but the 20s years of the 20th century became the most cruel and riotous for America. But the times of Prohibition and the Great Depression turned out to be… Читать еще
Waterview restaurants in Miami
Do you want to enjoy lunch or dinner in one of the best restaurants in Miami, but a beautiful view of the sunset or the water is a very important criterion. Read our article about a dozen restaurants… Читать еще
Sarasota City Tour 5 1 0 0
Sharing: