Dry Tortugas or Dry Turtle is an archipelago consisting of 7 small islands, as well as reefs and sand. It is located 100 kilometers west of the wondrous town of Key West. The flora and fauna are very diverse here, and many legends go about pirate adventures and flooded treasures. Previously, the island was called a turtle, however, in order to warn travelers about the lack of fresh water, it was called dry.

All surrounding islands, as well as the sandbank and the sea, are part of the Dry Tortugas National Park. 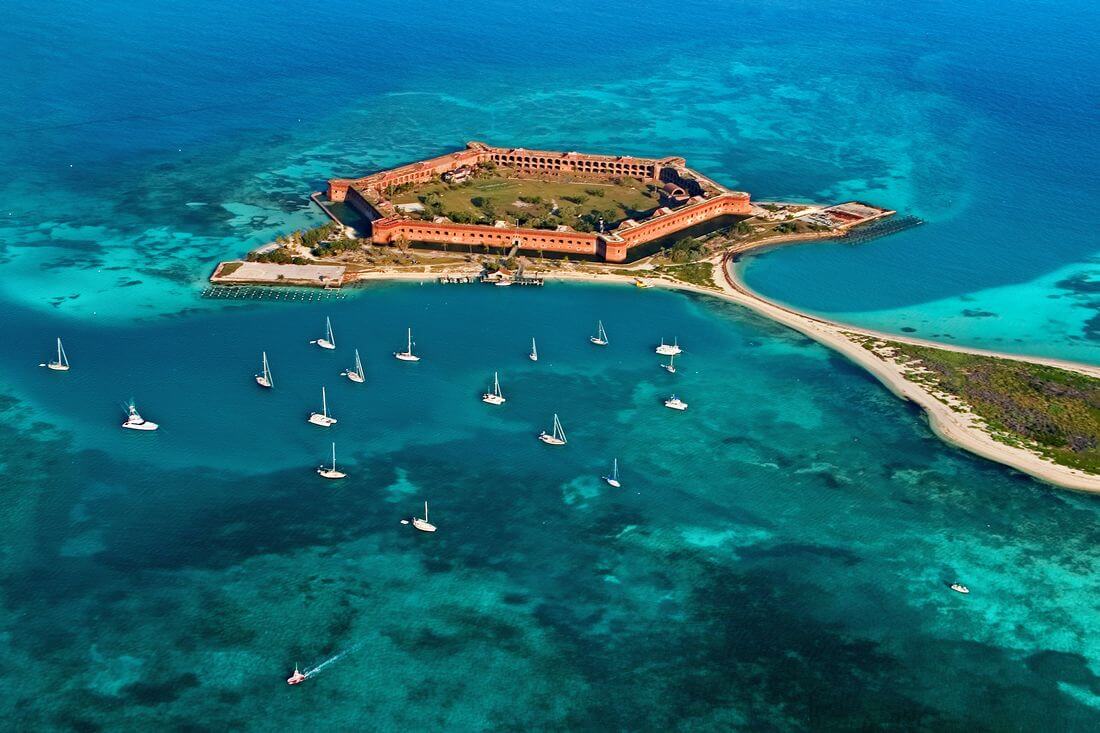 A key object of the Dry Tortugas National Park is a unique coastal fortification and one of the largest in the United States, which Garden Key Island boasts. It is called Fort Jefferson. The fort has the shape of a hexagon and consists of three tiers. Within the walls of the structure, 410 cannons were mounted.

The fort served as a prison for various intruders and deserters during the Civil War, as well as after its completion. But in 1874, after two strong hurricanes, as well as yellow fever, the military left the fort. But in 1898 the army returned to the building to use it in the conduct of the war with the Spaniards.

Also, the defensive structure for 12 years served as a quarantine station. During the First World War, he served as a garrison fort.

Fort Jefferson the truth was never completed. The whole reason is the lack of fresh water on the island. After all, it was necessary to constantly deliver it or to construct filtration facilities, which seriously increased the cost of maintaining the facility. In addition, constant hurricanes annoyed.

After some time, the need for a fortification disappeared, and it became part of the National Register of Historic Places, entering the list of famous historical sites in Florida. And this is part of the history. 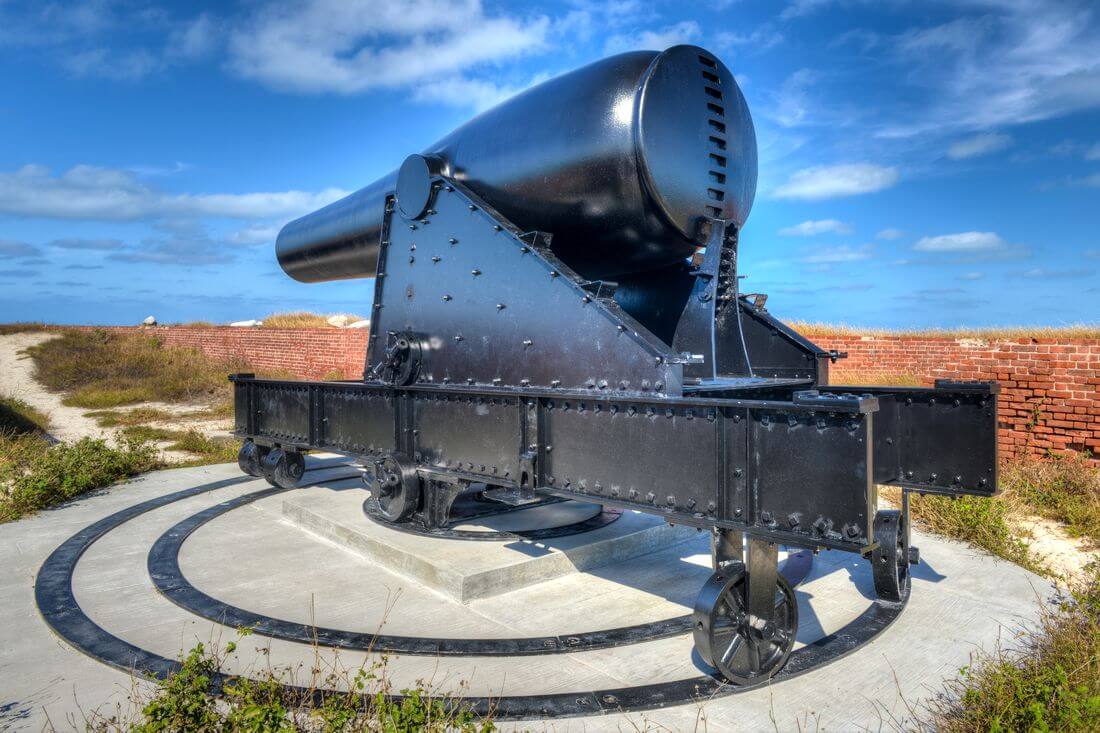 What to do and when to visit Dry Tortugas

In Dry Tortugas, civilization failed to squeeze nature. On the islands you can see hundreds of different species of animals, both marine, and air and land. People come here for a feeling of pristine nature untouched by anyone.

In addition, the islands are surrounded by huge coral reefs, in which reigned their own world of turtles, special fish, shellfish and other inhabitants. And the pristine clear water of the ocean makes it possible to contemplate all this wealth.

The waters around Dry Tortugas National Park are excellent places for divers. In addition, here you can see unique birds: hummingbirds, huge frigates, peregrine falcons and more. In one visit you can see at least 70 species of birds. In total there are up to 300 of them. From spring to autumn, you can observe tern nesting here, when up to 100 thousand of them gather.

The park is open all year. And the weather conditions of the subtropics allow you to visit the island at any time. Although if you do not want to get into the heat, it is better to come in the winter.

Regulars say that it is best to relax here from November to May. There is heavy tropical rain in the summer.

Like all the Caribbean, Garden Key Island and the rest of the archipelago included in Dry Tortugas are located in the rose itself — at the junction of the Atlantic and the Gulf of Mexico, because there are strongest winds passing in the storms. But this does not affect security. 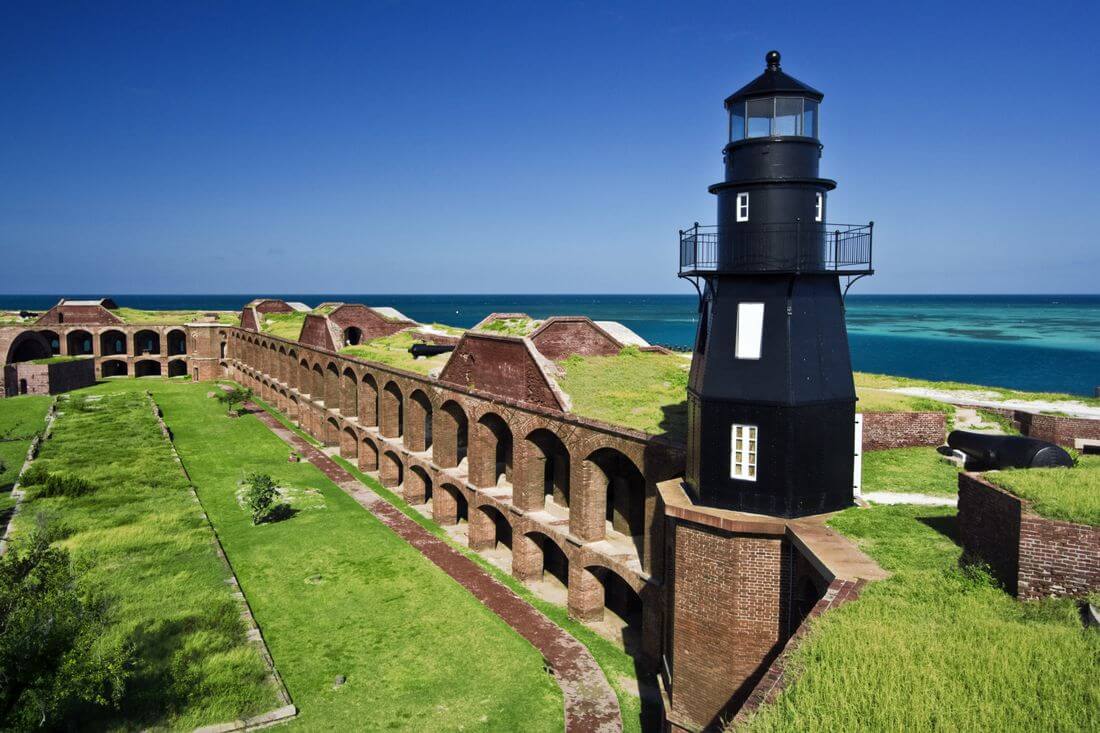 How to get to Dry Tortugas

There are two options to get to a unique place — by seaplane or ferry. The park is served by a ferry called The Yankee Freedom III, which is a progressive vessel with all the amenities, capable of developing good speed. Ferry guests can enjoy a free breakfast. On the way back, adults can visit the bar, and children can eat sweets and popcorn. A tour to the island takes 10 hours, therefore it is better to calculate your own time in advance.

Those who want to save time on the way can use another transport - a seaplane. The flight lasts no more than 45 minutes. Tourists can visit the park all day or half a day. Flying over the water surface at a low altitude gives a unique feeling. Tourists can view all the inhabitants of the sea in detail. You can see sharks, dolphins, as well as large turtles.

After arriving at Garden Key Island, guides will conduct a 40-minute fortification tour, as well as snorkeling equipment and drinks.

Camping is another chance to be in a unique park. But it only holds 3 tents in 2 places. But such a vacation is worth the wait for places. It includes traditional swimming and diving, breakfast, as well as lunch on the day of arrival, and a tour of the legendary fort for 40 minutes.

We will show you the most unusual routes!
Book a tour
Also read
Hugh Taylor Birch State Park
Hugh Taylor Birch State Park is a charming park in Fort Lauderdale in Florida, the embodiment of anxious dream and hard work of one person. Birch became the embodiment of love for nature and humanity,… Read more
John Pennekamp Coral Reef State Park
The picturesque John Pennekamp Coral Reef State Park, located in the vicinity of Miami, is conceived as an underwater reserve where representatives of the flora and fauna of the coastal strip could live… Read more
Everglades National Park
Everglades National Park is a national conservation area and a combination of the most diverse phenomena of life on Earth, collected in one place. The park offers a look at collections of plants and groups… Read more
Long Key State Park
Long Key State Park, located on the island of the same name, offers a relaxing stay for guests and residents of Miami and Florida. The Spaniards, who discovered this island, called it a serpentine, because… Read more
Holidays in Miami
Читать еще
Mobile network operators in the USA
The good news for those who confuse "ringing" and "ringing" - Americans do not care. But how to make a call or message in the United States and not give the last shirt for it, the information will be… Читать еще
Who founded Miami
At the very end of the nineteenth century, when Miami was given the status of a city, only three hundred people lived there. All achievements would have been impossible without active local residents,… Читать еще
Waterview restaurants in Miami
Do you want to enjoy lunch or dinner in one of the best restaurants in Miami, but a beautiful view of the sunset or the water is a very important criterion. Read our article about a dozen restaurants… Читать еще
Smoking in the USA
Smoking is the bad habit that infected the whole world from America. But modern Americans themselves are not particularly loyal to smoking. How it happened, let's try to figure it out. Читать еще
Atchafalaya Basin
The Atchafalaya Basin is the largest river swamp in the country, containing almost a million acres of bottom hardwood, marshes, flood and swampy lakes of America. The pool begins just outside Simmesport… Читать еще
Mount Charleston
The view of the snow-capped mountains seems a bit surreal when Las Vegas still feels the warmth of the desert sun. At 11,916 feet above sea level, Charleston Peak is covered in snow for more than six… Читать еще
Comic-Con International
Comic-Con is an exhibition that educates people about pop culture. The bet is on comics and related art forms. Organizers support public presentations and exhibitions on the historical contribution of… Читать еще
Dry Tortugas National Park 5 1 0 0
Sharing: