The city - the island of Fisher Island in Miami is famous for the highest per capita incomes regulated by access, exceptional landscape and outstanding people who stand behind its creation, development and the halo of its fame and success. 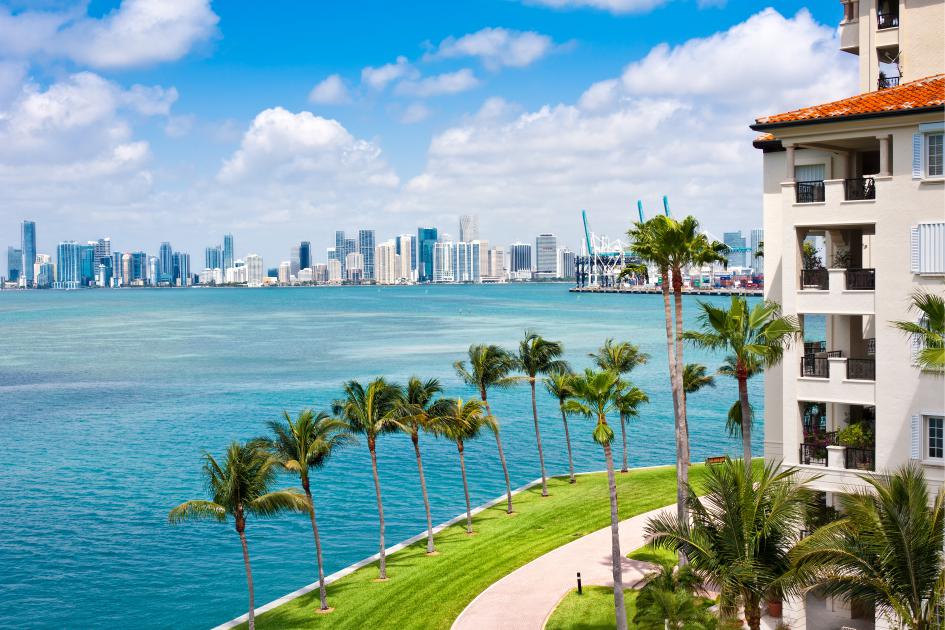 It all began in 1906, when the city on the water began its administrative existence. 12 years later, island owner Herman Walker sells it to Dana Dorsey, the first African American millionaire. Dorsey, in turn, resells it to Karl Fischer, the king of real estate, and the building area is growing by leaps and bounds. But a year later, Fisher sees the miracle of ship design - William Vanderbilt’s 250-foot yacht , a frequent guest on the sunny coast. "Your yacht in exchange for my island!".

The legendary deal took place in 1920 and transferred to the possession of Vanderbilt  3 hectares of island land, which soon doubled. In 1936, construction began on a luxurious Mediterranean-style residence, with a galaxy of guest houses, elegant pavilions, swimming pools, tennis courts and artfully laid out gardens. Ensemble completed in 1941, it serves as the winter residence of the family and a platform for brilliant social receptions.

After a series of sales in the 40s, Garfield Wood, a talented engineer and inventor of a hydraulic hoist, became the owner of the estate. He spent here 25 years working on projects of electric cars and military boats.

In the seventies, land and real estate owners change, and from the 90s flourishing begins in the tourism industry through the Fisher Island Club and its exceptional service for residents and guests of the club. In 2007, a large-scale restoration of the historic residence of Vanderbilts. New buildings of the Beach Club and hotel villas are added to the original buildings, the golf area is transformed, and the building of the aircraft hangar is transformed into a SPA and fitness pavilion. 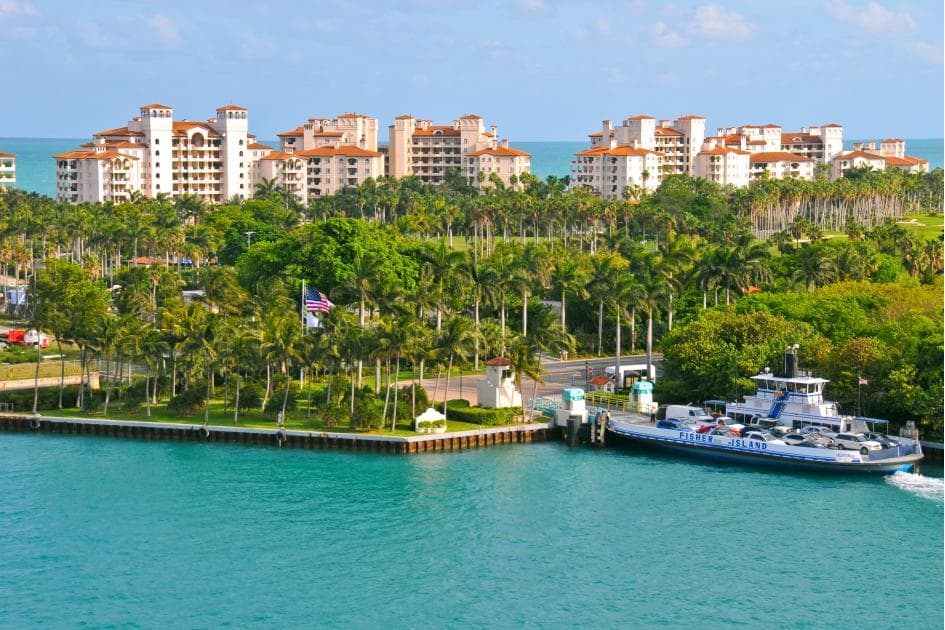 Fisher Island is located in the Bay of Miami, a few hundred meters from the mainland, however you can reach it only by water, by boat or ferry . This "Detachment " is intended: Fisher Island cultivates its image as an elite resort, its inhabitants are famous media people, screen stars and sports champions.

Heart of resort life: Fisher Island Club. This charming European-style hotel ensemble oversees the hotel in the historic residence of the Vanderbilt family and its many accompanying services.

The hotel guests live in cozy and elegant interiors of renovated comfortable cottages and guest houses, as well as in modern villas with spacious gardens. They offer modern tennis courts, a golf club with panoramic views of the beaches and city skyscrapers, as well as the advice of experienced instructors and motion analysis from the video, sports equipment stores of the highest quality. 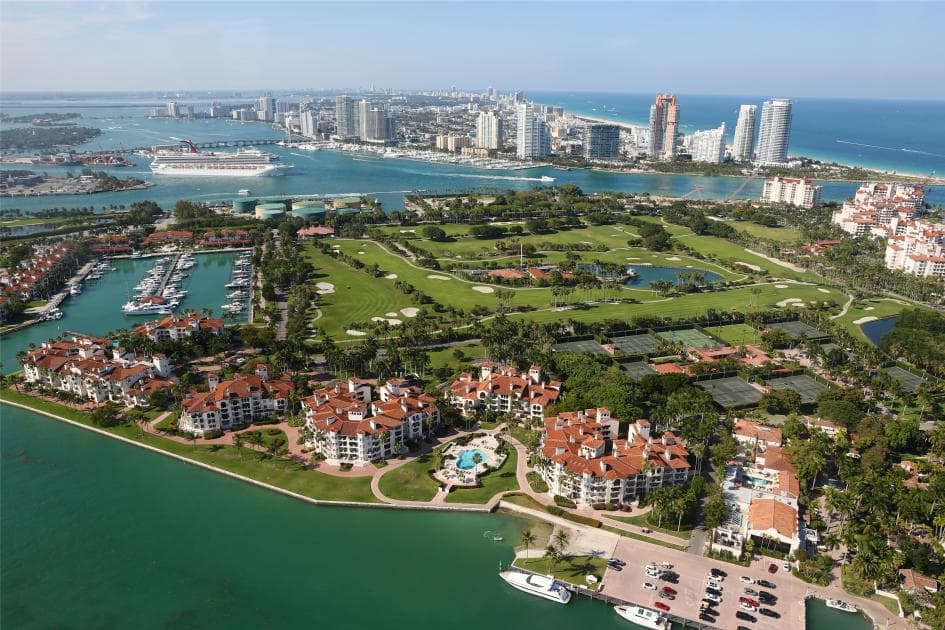 The Mediterranean-style spa pavilion includes a fitness center with individual classes and luxury cosmetic treatments. The most common adjective on the island’s private beach is “snow-white”. These include sand brought from the Bahamas, and beach pavilions, in the shade of which ice cocktails and aperitifs are tasting, and elegant yachts.

The Porto Cervo restaurant serves gourmet Italian cuisine, while Trattoria prepares traditional pizza. Greenside - this meal in the open air, Garwood Lounge - the chamber atmosphere of the club with a piano and traditional cuisine, and on the small market Gourmet - a rich selection of selected freshly ground coffee.

Visit this privileged resort and its surroundings on a yacht, helicopter, limousine or seaplane, as well as to organize any event you can help American Butler - a connoisseur of hospitable Florida.
Send a request
Also read
Hallandale Beach
During its one hundred and twenty-year history, this city has traveled a dizzying path from a modest postal shop to one of the most vibrant entertainment centers in Florida, famous for its casinos, jumps… Read more
Hialeah Gardens
Hialeah Gardens is a city in Florida, in the United States of America, located in Miami-Dade County. Its population is just over 20 thousand people. There are often inscriptions and signs in Spanish,… Read more
Homestead
Homestead, formerly one of the districts of Miami, is located in the south of the peninsula. Atypical for Florida cities, the lack of a beach is more than compensated for by the most interesting sights.… Read more
Little Havana
Miami is a true paradise for lovers of holidays and stunningly interesting vacations. No wonder many tourists flock to this American city to spend their well-deserved vacation. What is the suburb of Little… Read more
Decorated Christmas Cities
Читать еще
Credit history
America lives on credit - everybody knows it. But how do the Americans manage not to get caught up in debt? We will help to understand this issue and not to break the eye of complex terms. The new material… Читать еще
Ralph Lauren
Читать еще
Miami Design District Dining
After decades of decline, Design District has gained fame as a place for art, design and fashion. There are more than 130 art galleries, exhibition halls, creative services, architectural firms, luxury… Читать еще
Union Square
Читать еще
Fisher Island 5 1 0 0
Sharing: