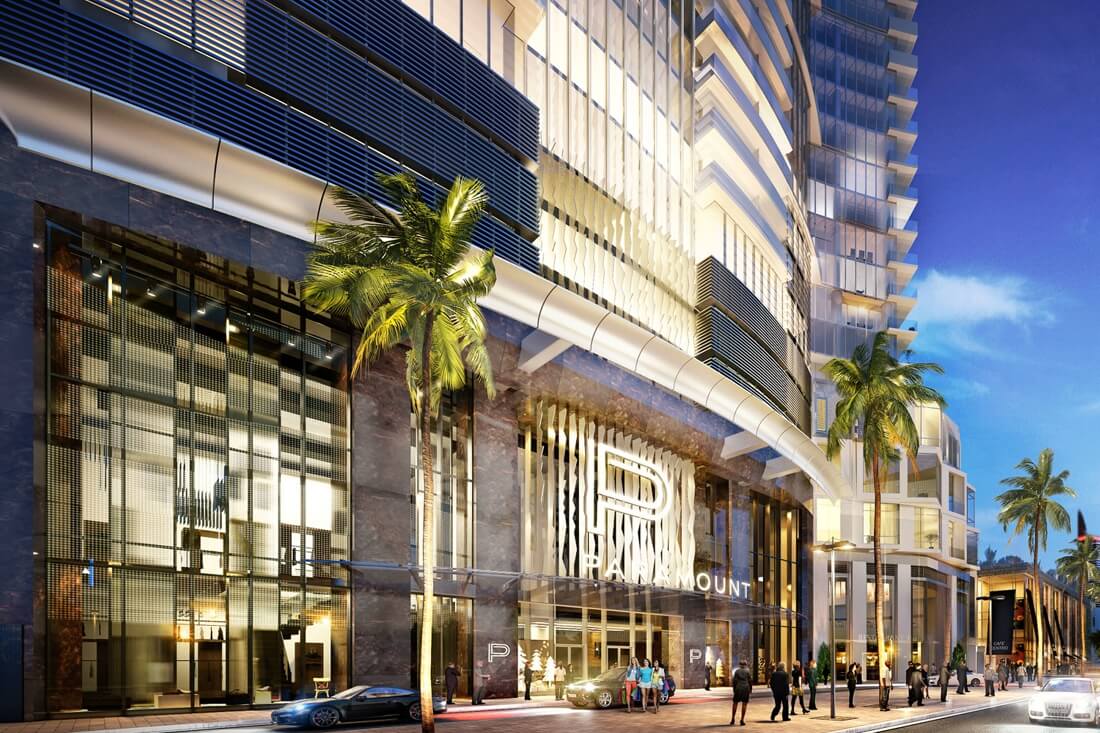 Luxury real estate Paramount Miami Worldcenter has already gained many fans who have purchased apartments in this complex. In the center, it is planned to locate a large number of projects that will make living in a new building the most comfortable and convenient.

A luxury new building is one of the largest projects in the US, where you can get a Green Card in a short time. The housing is located in the center of Downtown and occupies more than 12 hectares. It is planned to place a large number of shopping and entertainment centers, spa salons, beauty parlors and other things on the territory of the complex. Not far from the new building is the Museum Park, which impresses with its picturesque nature and a view of the ocean's water surface. Also nearby are other private and municipal institutions:

Paramount Worldcenter is part of the EB-5 program, which allows apartment owners who are not US citizens to receive a Green Card already 2 years after the purchase of the apartment. There are 150 places in the program in total, but most of them are already taken. Also, under the EB-5 program, the conditions for acquiring apartments are slightly changed, making it much easier for buyers from other countries to buy property in this condominium. In the elite new building, more than 60% of the apartments have already been sold, despite the fact that the completion of construction is planned for 2019.

Infrastructure of the World Center

It is planned to place 513 apartments in the house, the area of each of them will be 120-221 square meters. The apartments have a different layout, due to the stylish and unusual design solution. The ceiling height in each apartment is three meters, and spacious layouts with large windows create the illusion of an open interior. At the bottom of the building there is a shopping center The Mall, which includes various entertainment:

Designers who are engaged in the development of interior design have created kitchens in modern European design. The apartments are equipped with a rain shower and a jacuzzi, so that each owner of the apartment can take water treatments in a comfortable way.

On the 9th floor of the elite house there will be a large sports complex, which will include:

Miami World Center is the second largest residential complex in the United States. The 59-story building will complement the city of Miami and embellish its architecture. Leisure pool, lounge area overlooking the open sky, terraces for relaxation will not leave indifferent even the most demanding residents of the condominium.

American Butler provides comprehensive assistance in the acquisition and rental of housing in the United States. Managers will collect up-to-date information and offer the most optimal options. The agency also organizes sightseeing tours both in Miami and in other American cities.

The cost of apartments in an elite residential building varies from 700 thousand to 9.5 million dollars. Special agreements provide for payment of housing in several stages. The first stage is 50% of the cost of the apartment and is paid at the time of signing the contract. For buyers who participate in the EB-5 contract, the initial fee is 30%. The rest of the amount is paid upon completion of the transaction. Since the house has not yet been completed, the last installment will need to be paid in 2019.

When planning to purchase or rent a property in Miami, contact American Butler. We will help you choose the best option for real estate.
Оставить заявку
See also
Faena Mar
Faena Mar Miami Beach is a luxury complex with picturesque views of the coastal areas and the ocean. Luxury housing includes 41 apartments, which have from 1 to 5 rooms. A thoughtful layout ensures comfortable… Read more
Aston Martin Residences
The iconic British brand Aston Martin creates not only luxury sports cars, but also many other elegant things, now including real estate. Aston Martin Residences is a luxury new development in Miami,… Read more
One Thousand Museum
One Thousand Museum is an elite new building in Miami, what else to look for. Currently, this building, designed for people who can afford a premium lifestyle, is the tallest in its area and the fourth… Read more
Missoni Baia
Missoni Baia is a 57-story luxury tower with 249 exclusive residences with breathtaking views of the city and Biscayne Bay. Missoni Baia is a real masterpiece, created in collaboration with the world-famous… Read more
Boardwalks in the USA
Читать еще
Dental treatment in the USA
Читать еще
Kurt Cobain and Nirvana
Читать еще
Alcohol in the USA
Americans do not pronounce toasts — you need to drink without being distracted by all sorts of nonsense. But what they don’t interfere with in glasses, whatever they do with classic wine, and even… Читать еще
Paramount Miami Worldcenter 5 1 0 0
Sharing: