Crystal River National Wildlife Refuge is the best place to observe manatees. Sea cows are warm-blooded marine animals that are extremely sensitive to warm climates and cleanliness of the environment. It is for this reason that the Crystal River or Crystal River in Florida has become a national reserve. Here, in a mild climate and perfectly clear water, thousands of manatees are comfortably located for the winter.

The total area of the reserve is about 18 hectares. Crystal River National Park is located on Kings Bay. The depth of the bay is very small, the bay is fed by water coming from the Crystal River and warm underground sources. The average water temperature is 22-24 degrees. This is great for warm-blooded sea cows. 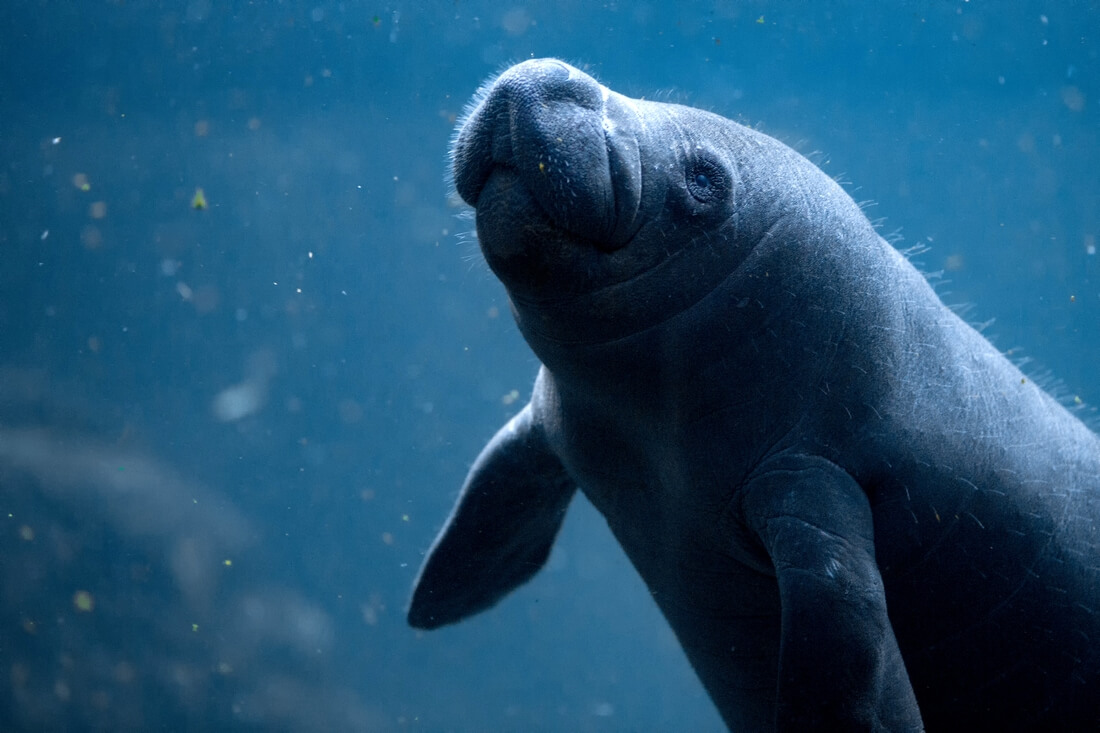 Why do people like to look at sea cows and manatees?

Thanks to environmental and animal welfare measures, the number of sea cows is increasing annually. Since 2002, when the observation was started, the number of cows has increased from 1,750 individuals to 6,000. This is also not too much, but for the species that was on the verge of destruction, the progress is significant.

The friendly nature, good nature and curiosity of marine giants attract people. Mammals are absolutely safe as much as possible for creatures of their size. The depth of the bay is small, no strong currents, it is more difficult to drown in Crystal River Bay than in a coffee cup.

Swimming with beauties is even more interesting than swimming with dolphins. Dolphins may not be too interested in people in the water; manatee will always be curious. If you lie on the water, mammals, including females with cubs, will certainly come to meet and make friends as much as possible. Another feature of giants is their love of physical contacts. They really like touching and stroking.

Between themselves, they almost continuously exchange tenderness, touching each other. Not without reason, these lumps believe that swimming people also like this treatment. You can pet animals to their complete pleasure. If you are shoved in response by a hefty and very mobile carcass in the water, do not be offended.

What is forbidden and how to get to Crystal River

Many people come to swim with friendly water giants, relax in warm water, no serious predators in the reserve is not found.

There are special recreational areas for manatees in Crystal River Park, where people are not allowed to enter or swim. We must not forget that Crystal River National Park is not an attraction, but a reserve with rare animals and a conservation area. Any motor boats and yachts are prohibited in the waters of the park so as not to injure the manatees. The bay is patrolled by volunteers and animal welfare specialists from the local Rybnadzor, more precisely from the Fisheries Protection Service.

The water gullies are herbivorous and feed on seaweeds. Toward noon, almost all mammals solemnly sail away for lunch. If you want to splash freely in warm water - a happy time has come for you. But if you plan to communicate with sea cows, it is better to come in the morning.

There are several options to get to swimming with manatees. Not far from Orlando, the very one where Disneyland, on the picturesque shore of the Gulf of Mexico, is the city of Crystal River. Tours with swimming among manatees can be ordered almost anywhere, they sometimes live near hotels in specially equipped ponds. You can get to the reserve from the town on your own, by boat. 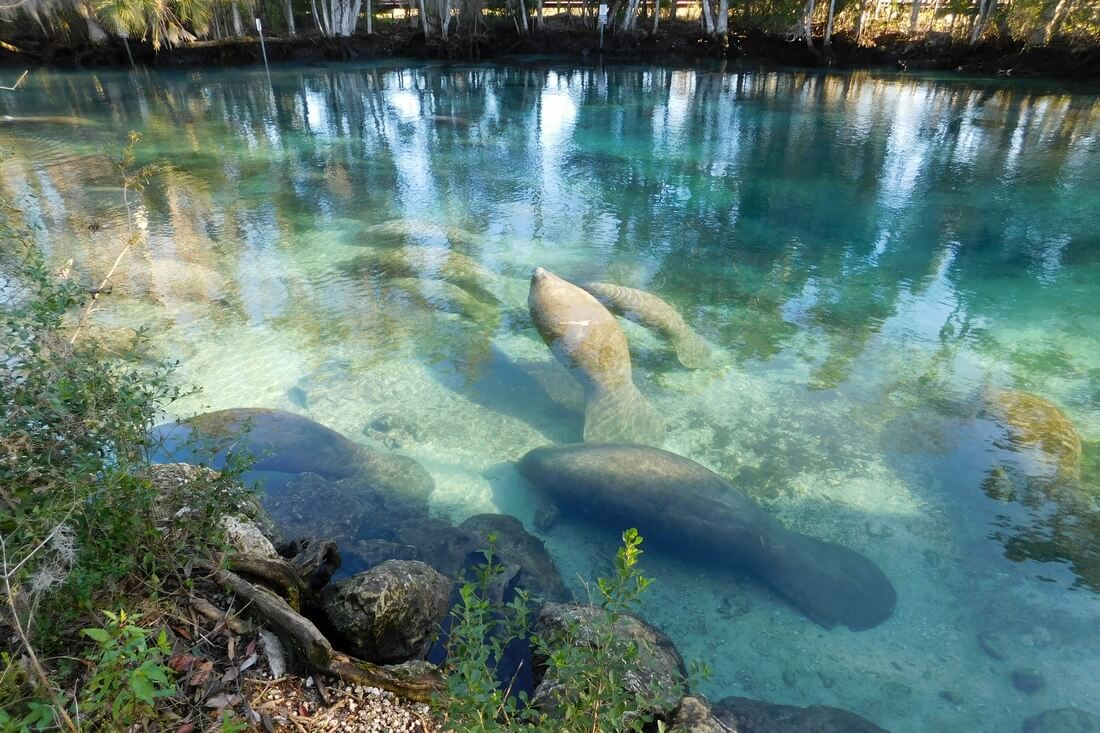 What you need to know about Crystal River National Wildlife Refuge

Do not miss the opportunity to swim with sea cows in the park of the Crystal River.

Book an excursion to American Butler!
Book a tour
Also read
Bahia Honda State Park
Bahia Honda State Park is a national reserve located in the southernmost corner of the state. The special attraction of this place in the USA is its luxurious beaches. The peculiarity of the park lies… Read more
Shark Valley
Shark Valley is a valley located in the Everglades Park in Florida. Only here you can truly appreciate the whole feature, significance and beauty of the state’s nature. Do not forget to bring a… Read more
Long Key State Park
Long Key State Park, located on the island of the same name, offers a relaxing stay for guests and residents of Miami and Florida. The Spaniards, who discovered this island, called it a serpentine, because… Read more
Dry Tortugas National Park
Dry Tortugas or Dry Turtle is an archipelago consisting of 7 small islands, as well as reefs and sand. It is located 100 kilometers west of the wondrous town of Key West. The flora and fauna are very… Read more
Where to ski in the USA?
Читать еще
Credit history
America lives on credit - everybody knows it. But how do the Americans manage not to get caught up in debt? We will help to understand this issue and not to break the eye of complex terms. The new material… Читать еще
Who is Elon Musk
Do you know who Elon Musk is, where he grew up and what does he do? What has he done useful and what plans to achieve? Read more in the article about one of the most famous entrepreneurs of our time. Читать еще
Fast food in the USA
What do you know about fast food? Probably that they do not need to get involved. And rightly so, but in fact the question is much more interesting. Argue that we will break at least 3 stereotypes right… Читать еще
Smoking in the USA
Smoking is the bad habit that infected the whole world from America. But modern Americans themselves are not particularly loyal to smoking. How it happened, let's try to figure it out. Читать еще
Atchafalaya Basin
The Atchafalaya Basin is the largest river swamp in the country, containing almost a million acres of bottom hardwood, marshes, flood and swampy lakes of America. The pool begins just outside Simmesport… Читать еще
Mount Charleston
The view of the snow-capped mountains seems a bit surreal when Las Vegas still feels the warmth of the desert sun. At 11,916 feet above sea level, Charleston Peak is covered in snow for more than six… Читать еще
Comic-Con International
Comic-Con is an exhibition that educates people about pop culture. The bet is on comics and related art forms. Organizers support public presentations and exhibitions on the historical contribution of… Читать еще
Crystal River 5 1 0 0
Sharing: