The list of classes at Pensacola Beach is quite extensive. Add to this the beautiful year-round weather, and it only becomes clearer that this city turns into a great place to relax. The period from May to October is the time when most people decide to come here and have some fun. 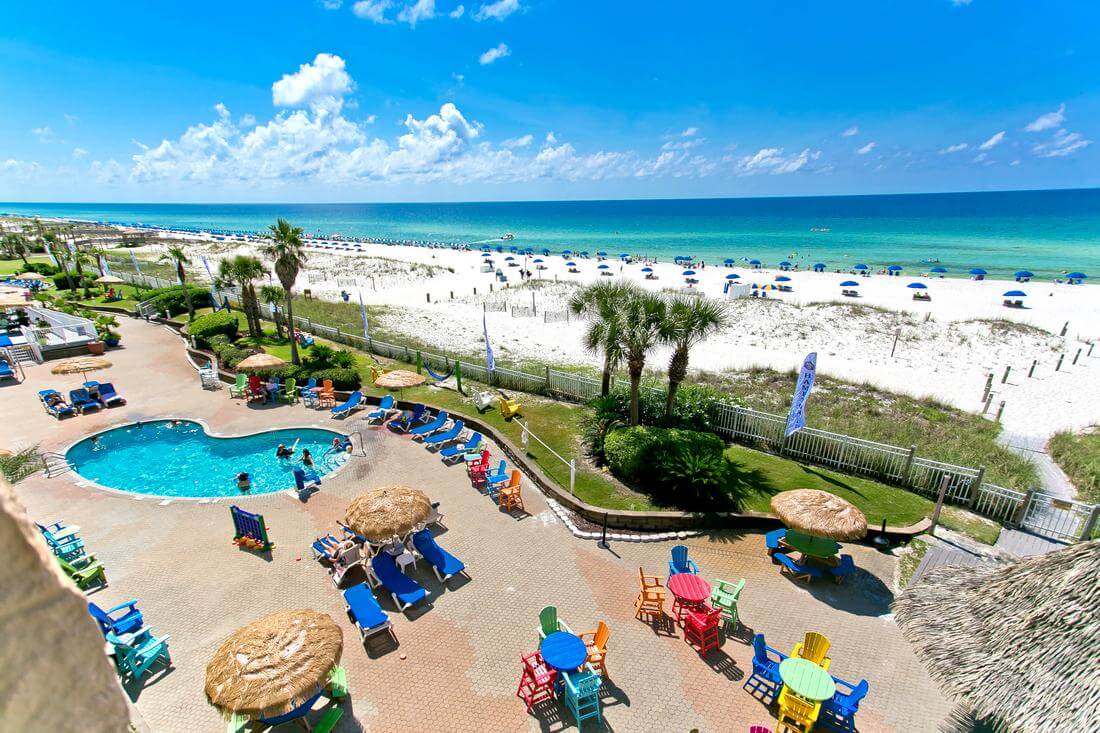 What is noteworthy about Pensacola Beach

Pensacola Beach outlines the barrier island of Santa Rosa and offers visitors two completely different beaches. From the Persian Gulf, visitors will be offered an unrivaled view of the coast, as well as snow-white coastline and emerald waters.

The soft sands bordering the Santa Rosa Bay are popular with families as they offer access to a boardwalk full of shops and restaurants.

Although the beaches of the island are known as Pensacola Beach, there are other names for small sand streaks. For example, Quietwater Beach is located on the sound side, extending from the Portofino walkway to the bridge, and is very convenient for families with lifeguard protection. Casino beach located on the bay and has many amenities, including toilets, changing rooms, a fishing pier and much more. This beach is located south of the intersection of Via de Luna and Fort Pickens Road.

Pensacola Beach is located on Santa Rosa Island and can be reached by crossing two bridges across the 98th US Highway and 399th Florida State Highway. 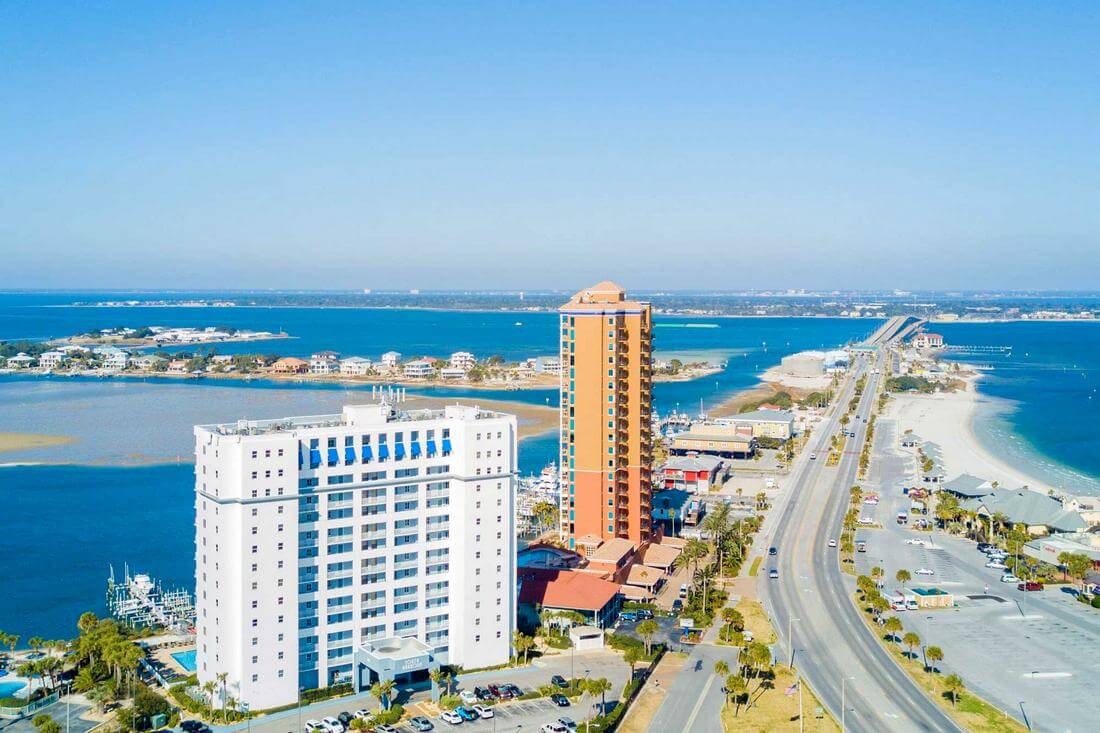 What to do in Pensacola Beach

Although Pensacola Beach has many interesting sights, many people enjoy a quiet and relaxing atmosphere. 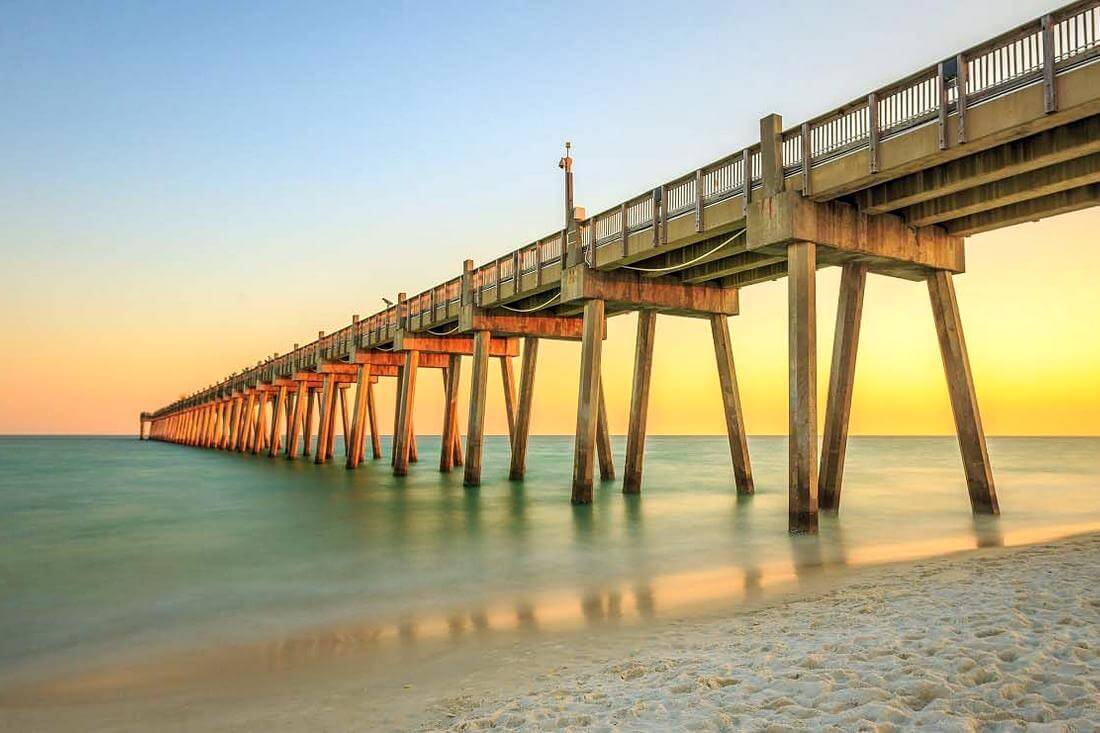 Pensacola Beach is part of the Gulf Islands National Coast, a 150-mile nature reserve of protected beaches stretching from Mississippi to Florida. More than 250 species of birds and hundreds of other animals live on the national coast. Bird watching, picking up seashells and relaxing walks along the coast are something to enjoy on the National Coast.

Since Pensacola Beach is a popular holiday destination in Florida, beaches can be quite crowded in winter. If you want to avoid crowds, the best time to visit is on weekdays or summer. If you can withstand the summer heat, in the summer you can also save on resorts and hotels in Florida.

In addition to the beaches, there are other interesting things to do in Pensacola Beach. One of the most interesting activities is visiting Fort Pickens. A huge brick structure was built in the 1830s to protect the harbor. In the same place, in 1886-1888, the Apache leader Jeronimo was imprisoned.

The Fort Pickens tourist center has a small museum that displays exhibits about the area’s ecology, civil war and Jeronimo. The fort is also a campsite. The campsites are located in a pine forest and have nature trails leading to the beach.

Since Pensacola is a coastal city, fishing is wonderful. Visitors can go deep sea fishing or stay at inland water bodies, for example, in the Big Lagoon or in the State Park.

You can also take a tour of the Pensacola Lighthouse, the view from which is definitely worth the climb. You can see the barrier islands and the Gulf of Mexico at close range. 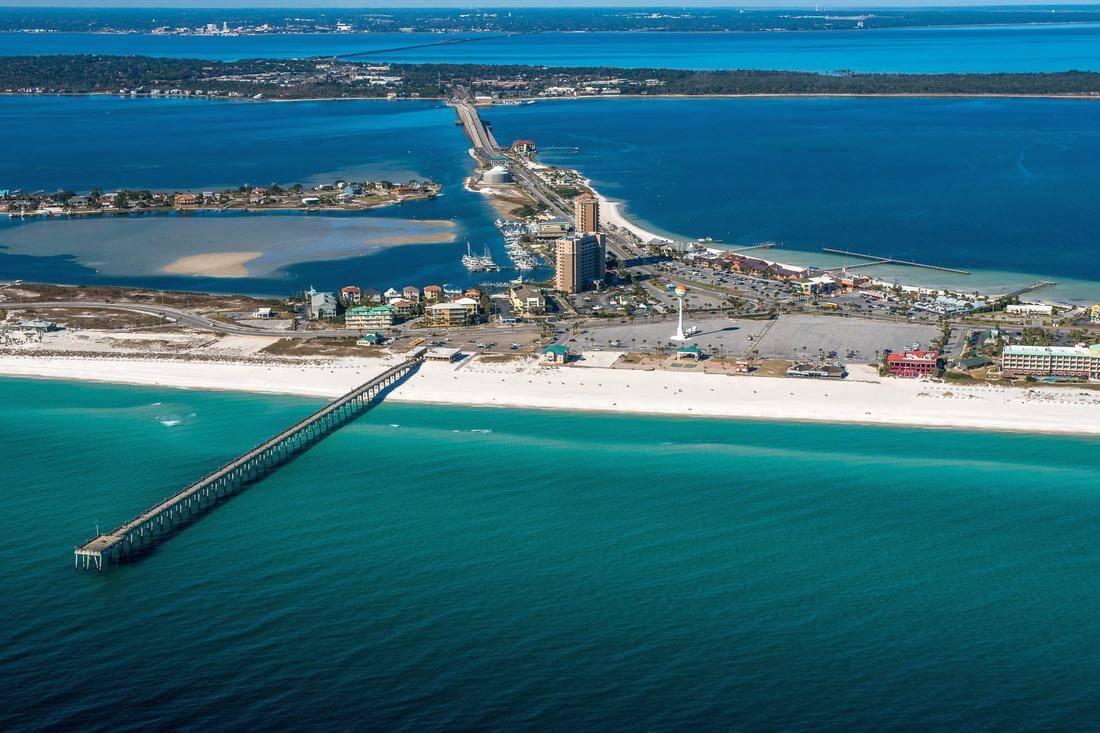 Pensacola Beach is an independent community from its neighbor, Pensacola. The eight square miles of land that make up Pensacola Beach originally belonged to the U.S. Department of the Interior, but were transferred to Escambia County in 1947, provided that the land was never sold. As a result, there are no real estate owners in the community, there is only a long-term tenant.

Indian attacks forced new arrivals to move from the mainland to the beach in 1722 near the modern fort of Pickens. Although this protected the settlers from attacks, they were extremely vulnerable to hurricanes, which eventually forced them to return to the mainland in 1752.

Much of the modern history of Pensacola Beach and the island of Santa Ross began with Fort Pickens, whose construction continued until the end of World War II. In 1971, coastal lands east and west of the community were assigned to the national coast of the Gulf Islands.

If you are going to visit Florida, losing sight of Pensacola Beach would be a sheer crime.

Call American Butler - we will organize a tour with a Russian-speaking guide.
Send a request