National Air and Space Museum in Washington DC begins to surprise from the very first second – as soon as you see it, it will simply be impossible to go inside. 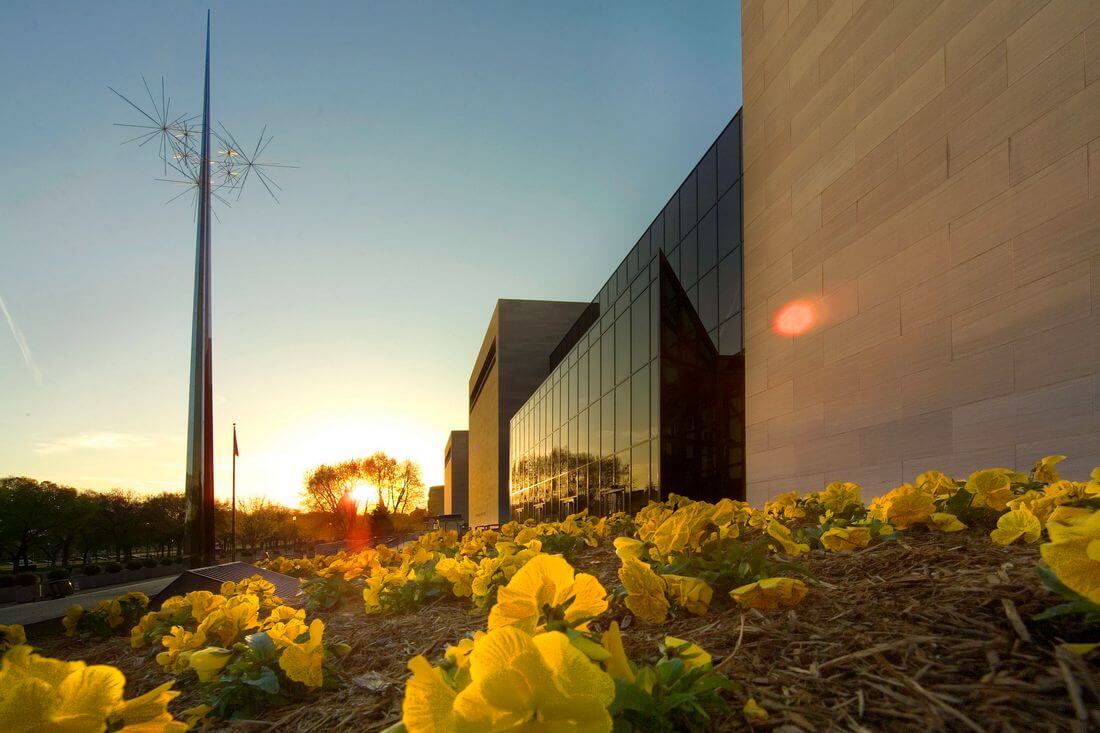 The history of the appearance of the aerospace museum

The Smithsonian Research Institute owes its founding to the National Museum of Aeronautics and Astronautics. More precisely, its small vaults.

The collection began with the first Steamfellow steam engine – in 1889, the institute bought one sample. Gradually around it began to develop a collection of aircraft and geographical artifacts of our time: from the first kites from China to the advanced aircraft at that time.

In 1946, US President Truman signed a decree establishing the National Aviation Museum at the institute. With the growth of the collection, more and more rooms were opened - hangars, warehouses, missile ranks. But soon these exhibition spaces ceased to be enough, and the technology developed so rapidly that the authorities had a choice – either to close the museum or rebuild.

The building on the National Alley was built in the 70s by Japanese-born architect Gio Obata. It consists of four marble cubes connected by glass galleries. It is in them that most of the collection is located. Right in front of the museum stands a stele with a futuristic constellation on top. At that time, the space race was gaining momentum, and the sculptural composition was almost an indispensable element of the building. It is called Ad Astra or "To the Stars."

The museum is not limited to the pavilions on the National Mall. It also includes an air museum located at Dulles Airport. It is officially called the Steven F. Udvar-Hazy Center, in honor of a philanthropist from Hungary who financed its foundation, but is formally part of the Smithsonian Institution complex.

And, if the first building is more about history, then here is a real aviation observation tower, a cinema and an amazing collection of space shuttles, planes and helicopters from different eras.

Tackling the description of the exposition is a disastrous affair. But there are literally all the flagships of the world military and civil aviation, a real Discovery shuttle and a host of other aircraft, each of which can be viewed close.

How to get to Aerospace museum

If you live and work in the USA, it’s not easy, but if you are a tourist it’s easy! The Aerospace Museum, like the entire Smithsonian Museum, has free admission at both branches. But his work schedule is not very convenient: on weekdays, from 10:00 a.m. to 05:30 p.m. However, this does not prevent him from being crowded. If you want to get into a relatively unloaded time, come half an hour before opening.

It is also worth noting that over the past couple of years, training modules and attractions inside the museum have gradually become paid, so it is still recommended to take money with you. Entrance to the parking lot in front of the museum at Dulles Airport costs $15, and the nearest free is a dozen kilometers from the museum.

If you really want to, you can fly into space, and to Washington. And so that your leisure time in the USA will invariably please and develop, contact us in any way convenient for you. For example, leaving a request below.

Here we not only take orders for excursions, but also answer your questions about traveling to the USA.

American Butler does everything to ensure your comfort and safety!
Send a request