The Lincoln Memorial is one of the main attractions in Washington, which is located in the city center on the National Mall. The monument, which was seen by many - it is often played up in movies and cartoons. And for good reason. 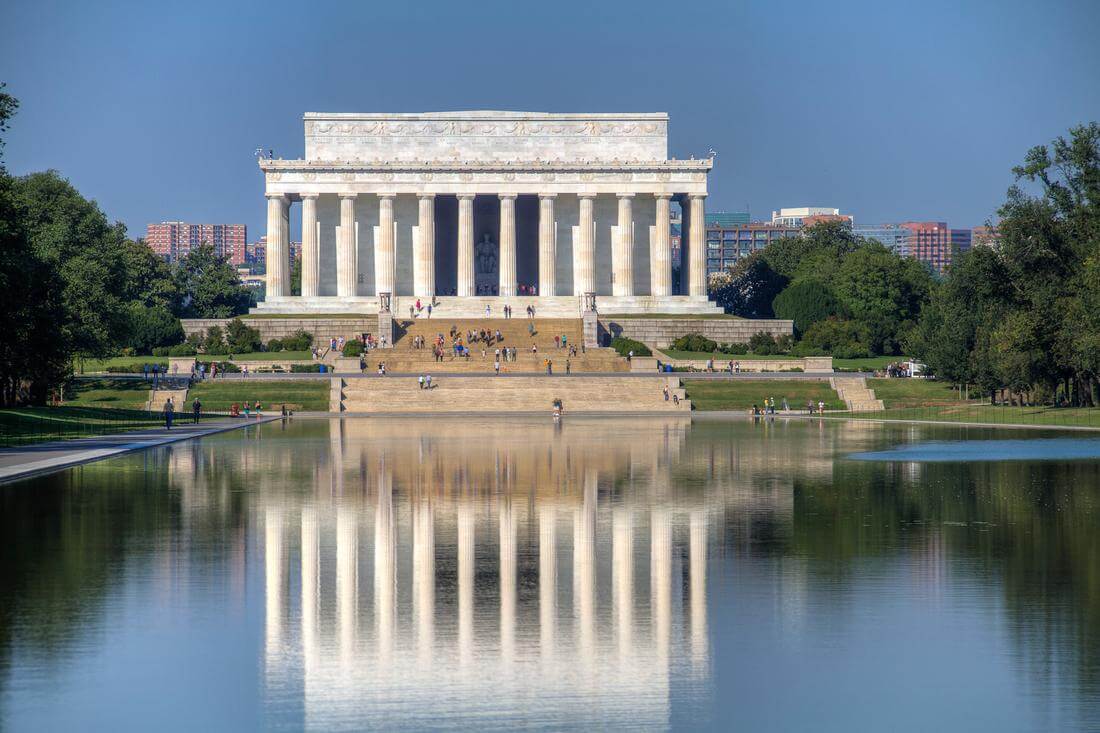 Something about Abraham Lincoln

Almost all American children at least once spoke to the public in a top hat, with false beard and mole. Lincoln is perhaps the most famous political figure, and this title has good reasons.

Abraham Lincoln was the president of the United States during the Civil War. He came from a poor family of farmers, received his own education and made his way first to the lawyer and then to the political elite of the country.

Almost immediately after his appointment began the clashes of the northern and southern states. Lincoln called for unification, but it still came to war. As a result, the north under the leadership of Lincoln defeated the southern Confederation. In the United States, slavery was abolished, and former adversaries were able to find common points of contact.

Also, when it was built the first transcontinental railroad, the development of western lands and many more important, strengthening the state and the spirit of citizens affairs began.

In the history of Lincoln remained as "Uncle Abe". And it’s hard to describe what a shock to the nation was his murder - Lincoln died from a shot in the head from a supporter of the southerners who lost the war. 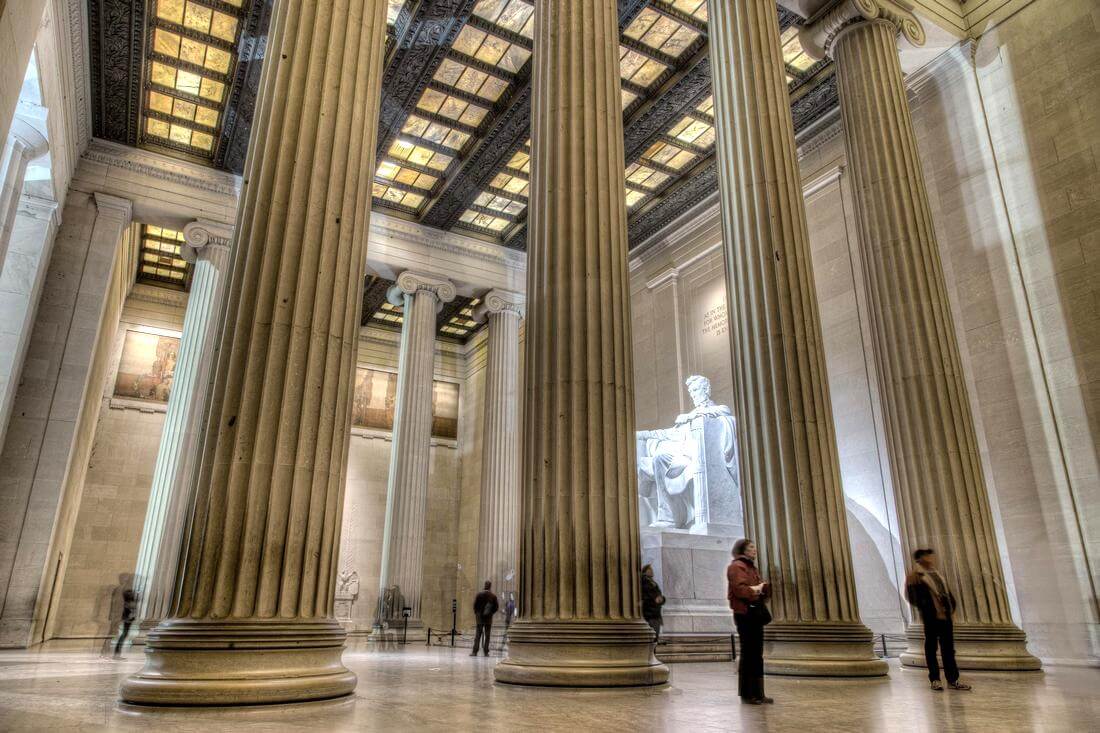 More about the memorial 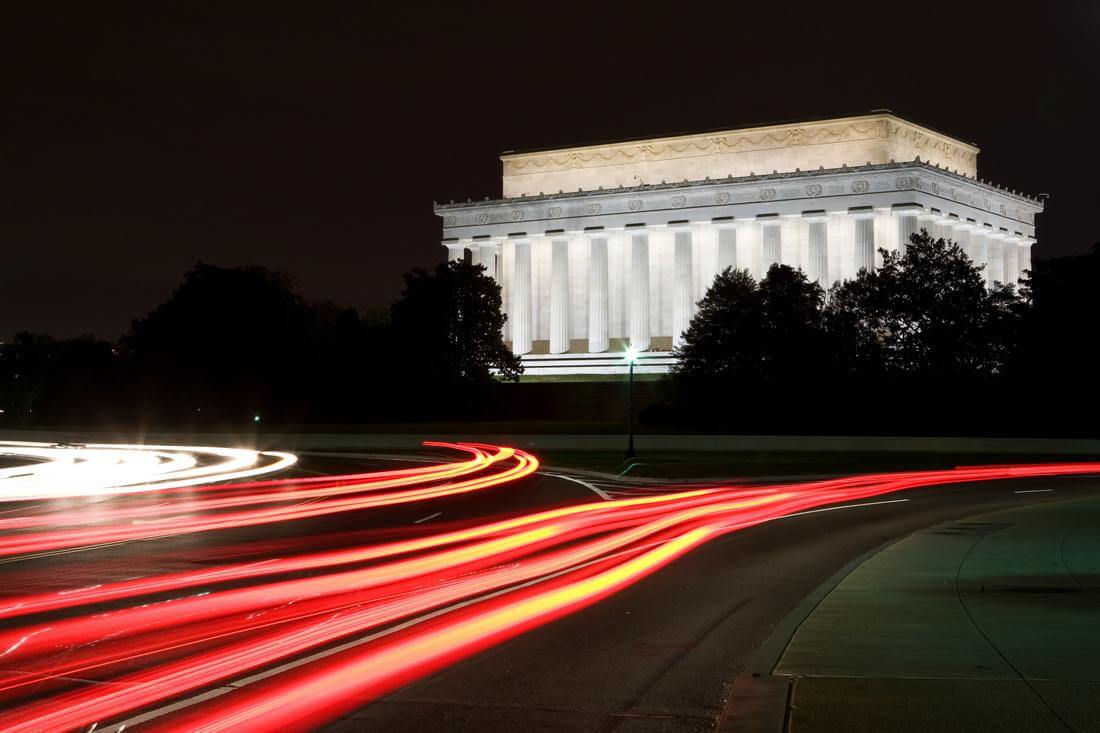 The memorial looks like an ancient Greek temple is not accidental - this form was chosen for deep symbolism, although it was considered too elaborate for a modest Lincoln. On these steps, made of limestone and marble, many significant speeches were delivered, including the historical performance of Martin Luther King.

The building is surrounded by 36 columns by the number of states that united at the time of Lincoln's death. By the time of the end of their construction it became even more.

As a result, it was decided to put the names of the 48 united states on the outer walls. Even later, in front of the entrance, two stone slabs were installed with the names of two more - Alaska and Hawaii.

The pavilion houses a six-meter marble statue. The monument's author, Daniel French, depicted Lincoln sitting and looking thoughtfully towards the Capitol and the Washington Monument. Directly above it is an engraving with the phrase: "The memory of Abraham Lincoln will forever remain in this temple and the hearts of the people for whom he has kept unity".

The walls are also decorated with engravings with speeches of the President, which he was famous for. Including speech at his inauguration. 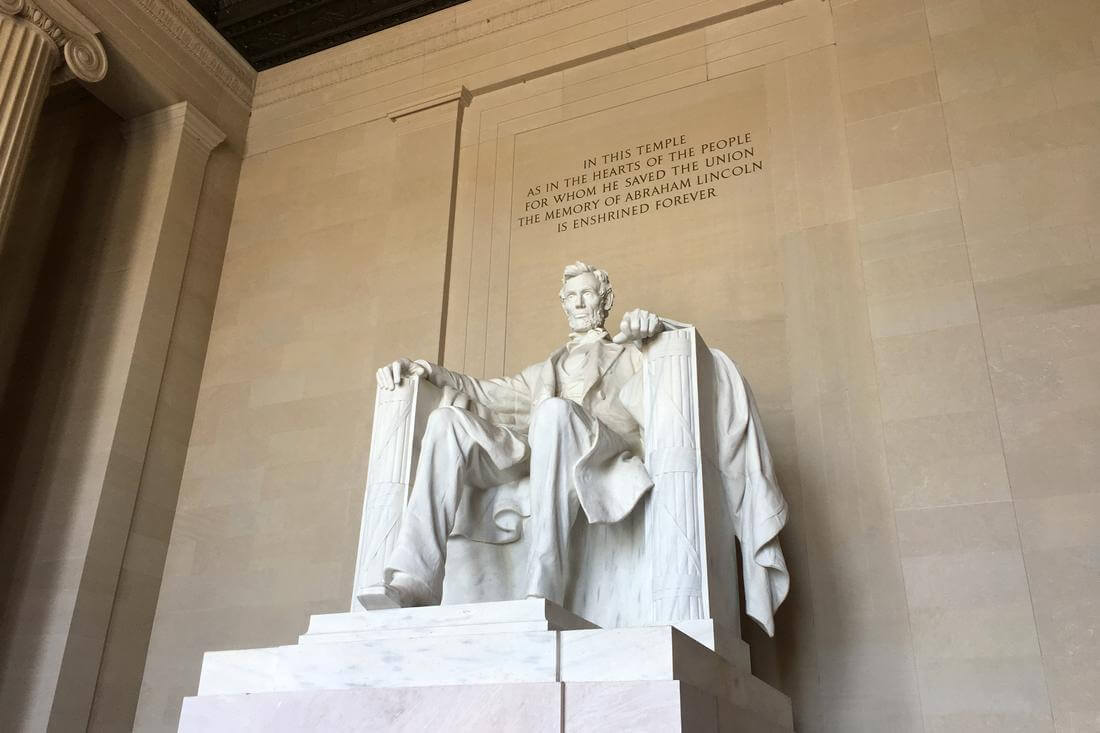 The Lincoln Memorial has been repeatedly criticized for nothing. And for the size, and for bad taste, and even for color. But the fact that he was needed, no one had any doubts. The memorial is open around the clock, every year more than 6 million people come here.

To join them is quite simple - just enough to come to the United States. And what else to visit in Washington and other cities and states, we are happy to tell. Contact us by clicking on the button and filling out the form or on any of the specified contacts.

Experts of American Butler will help with advice and excursion!
Send a request
Also read
Georgetown
Georgetown is when a fun campus meets a beautiful, respectable and cozy historic center. In general, not a district, but a dream. Read more
Jefferson Memorial
The Jefferson Memorial is in the top 5 favorite buildings of Americans, competing with the skyscrapers of New York. It is a quiet, peaceful place that pays tribute to one of the founders of the United… Read more
The Library of Congress
The Library of Congress looks more like a palace. So, it is the palace. And also the largest library in the world and a unique collection working for the well-being of an entire nation. Read more
Alexandria
Alexandria is a bit of a suburb of Washington. And this is the most comfortable place that you just saw. This is a beautiful and quiet place for family walks and measured, unhurried American life. Read more
Decorated Christmas Cities
Читать еще
Buying a home in Miami
Читать еще
Kurt Cobain and Nirvana
Читать еще
Italian restaurants in Miami
Florida's best trattorias elevate the spiritual simplicity of the kitchen to unattainable heights and help visitors to appreciate the authentic flavors of the country's characteristic culinary regions.… Читать еще
Smoking in the USA
Smoking is the bad habit that infected the whole world from America. But modern Americans themselves are not particularly loyal to smoking. How it happened, let's try to figure it out. Читать еще
Atchafalaya Basin
The Atchafalaya Basin is the largest river swamp in the country, containing almost a million acres of bottom hardwood, marshes, flood and swampy lakes of America. The pool begins just outside Simmesport… Читать еще
Mount Charleston
The view of the snow-capped mountains seems a bit surreal when Las Vegas still feels the warmth of the desert sun. At 11,916 feet above sea level, Charleston Peak is covered in snow for more than six… Читать еще
Comic-Con International
Comic-Con is an exhibition that educates people about pop culture. The bet is on comics and related art forms. Organizers support public presentations and exhibitions on the historical contribution of… Читать еще
Lincoln Memorial 5 1 0 0
Sharing: