The Jefferson Memorial is in the top 5 favorite buildings of Americans, competing with the skyscrapers of New York. It is a quiet, peaceful place that pays tribute to one of the founders of the United States of America, the third president, Thomas Jefferson.

Who is Jefferson and how was the memorial built 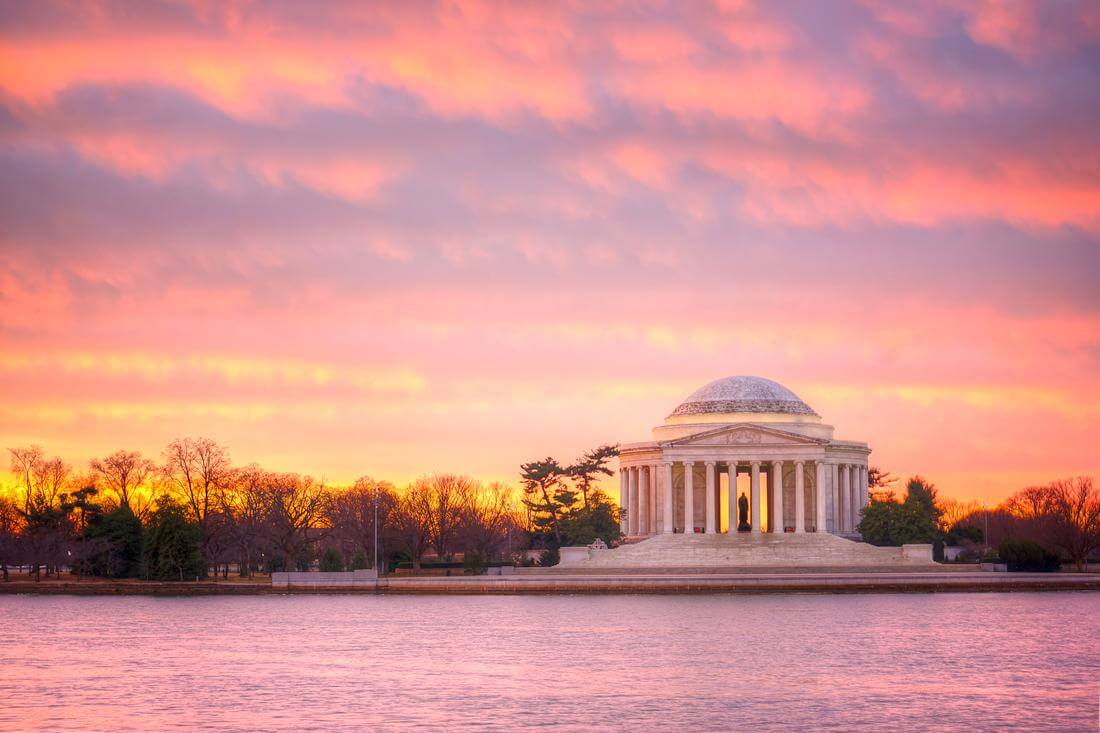 There are so many presidents in the USA that it’s just right to get confused, because we explain that Thomas Jefferson was the third. But even before that, he was one of the founding fathers of the United States and was one of the authors of the Declaration of Independence. And also noted participation in the War of Independence with the British.

He led the country from 1801 to 1809. Under Jefferson, the territory of the future state of Louisiana was bought from the French colonialists. Clark and Lewis’s land expedition belonged to the achievements of science and geography of those times: scientists explored the continent for the future organization of transport routes and Indian reservations.

Jefferson even wrote his own Bible, let alone control over other areas of political influence. Therefore, in history, he remained one of the most influential people in the country.

The memorial appeared without any significant reason. Just acting at that time, President Theodore Roosevelt was a big fan of Jefferson, and the idea to build something significant from the south side of the National Alley had long been in the air. Why not invest $3 million in the idol, since the place is idle?

The project was taken up by architect John Pope, who was also involved in the construction of the National Gallery of Art and several government offices in Washington. Pope was a neoclassical specialist, so the future memorial promised to look appropriate.

But in the midst of construction, Pope is dying, the project is being transferred to a third-party company. As a result, the memorial looks much stricter and simpler than originally planned. But this did not stop him from falling in love with the people. 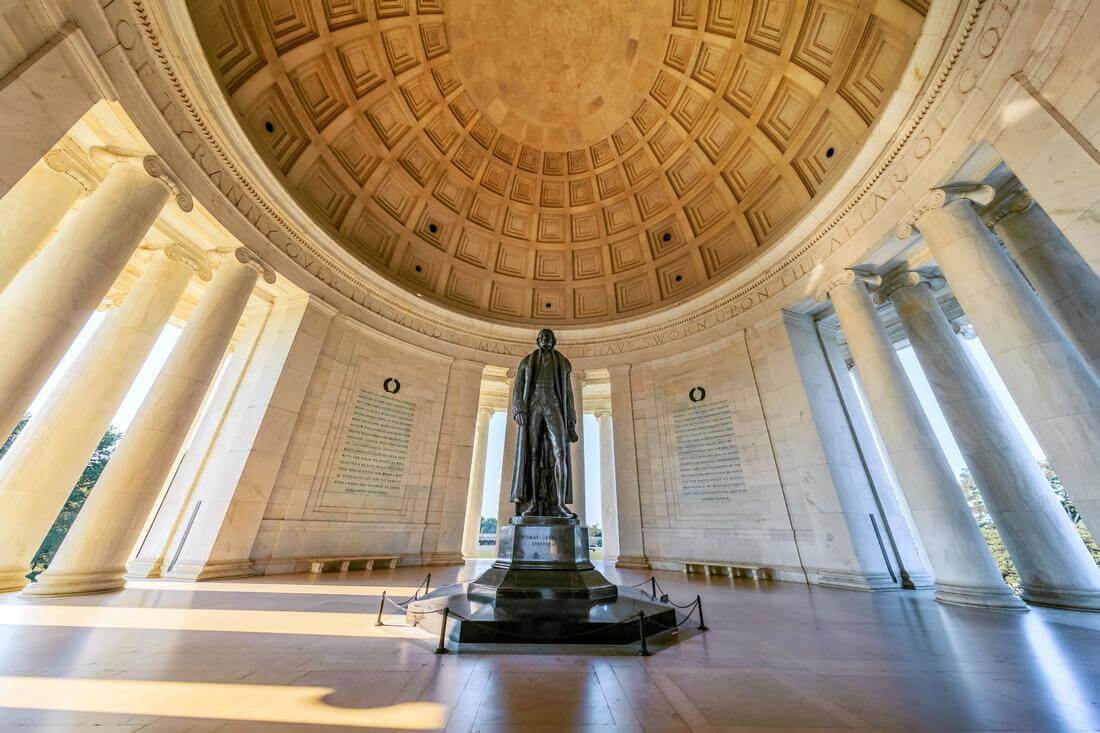 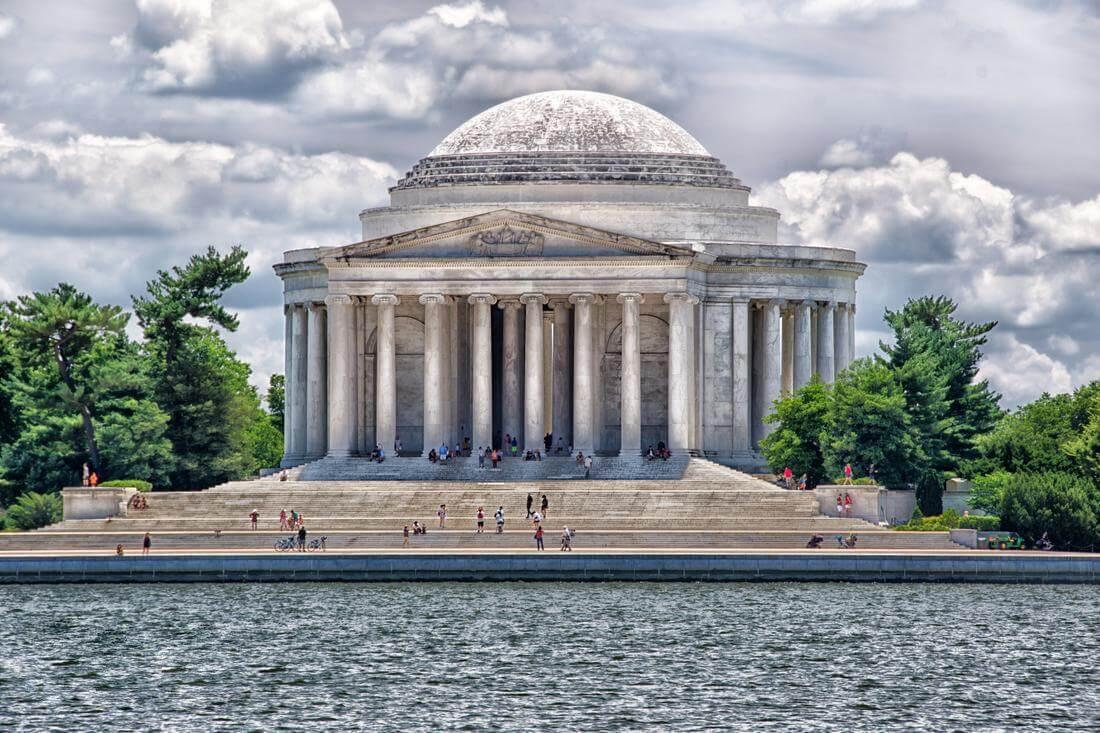 The memorial is a portico, colonnade and rotunda under the dome. Inside, the cornices are decorated with quotes from the Declaration of Independence, and in the center of the rotunda is a statue of Thomas Jefferson himself, about six meters high. Initially, it was plaster: the monument was completed during the Second World War, all bronze went to weapons. But after the war, the statue was still replaced by a bronze one, higher and more beautiful than the previous one.

The Jefferson Memorial is located next to the Tidal Basin, creating a beautiful landscape — the snow-white structure is reflected in the water and looks even thinner and more artful. The trees planted around the real Japanese sakura complement the landscape — a gift from the Tokyo government.

Sakura is a little strange in combination with the symbol of American ideals, but in the spring beauty eclipses any inconsistency. The shades of a pink, flowering tree perfectly complement the symbols of American power.

Today, the memorial is one of the four main structures of the National Alley, and in addition to aesthetics, it also helps to navigate in space. And we will also help orient ourselves in the American past, present and future.

We have been living in the USA for a long time, we are interested in the history, geography and culture of this country. We know a lot about how to live, work and relax here. And if our expertise may be useful to you, we will be happy to help resolve your problems and answer questions.

To do this, just contact us in any way convenient for you — our experts will give the fastest and most effective feedback.
Send a request