St. Patrick's Cathedral looks much more impressive than its present age. It seems that this giant really comes from the Middle Ages - as if someone had magically transferred it from an old European woman.

The history of the appearance of the cathedral among the "glass"

In fact, the cathedral was built at the end of the XIX century. Construction took as long as 20 years: from 1858 to 1878. And skillful stained glass windows were made even more, all 25 years. Such unfinished construction is explained not only by the complexity of the work, but also by the Civil War - in the 1860s, the Americans were not so beautiful. 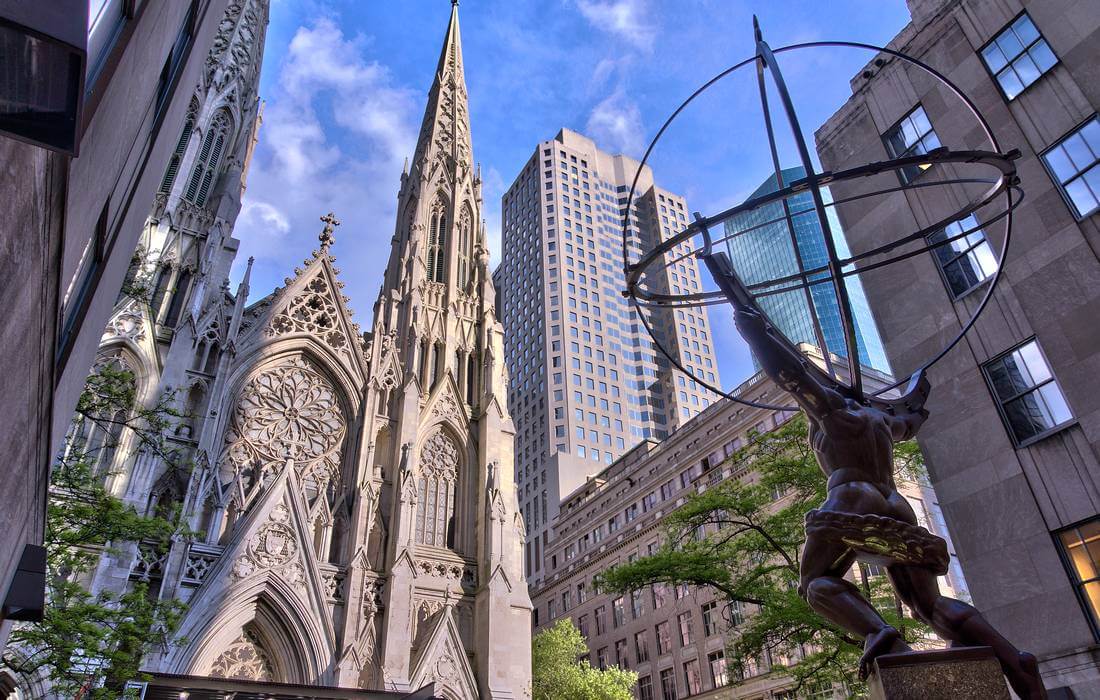 St. Patrick's Cathedral is a typical example of neo-gothic. The building is built in the shape of a Latin cross (this is visible only from above), it has high arches and three main “chambers” or a nave. The central nave is occupied by an altar and places for parishioners, and in the two side chapels are located today, confession booths , souvenir shops and museum exhibits related to Catholicism and the history of the building.

Already in 1927, the cathedral demanded a complete restoration - for such buildings it is almost an anti-record of fragility. Despite the fact that it was built of marble, its lining quickly becomes unusable, and water constantly flows into numerous joints and destroys the cathedral from the inside. They say that this is due to the failure of the calculations of builders in the process of construction - some started as it should, others finished as they wanted.

Now St. Patrick's Cathedral looks a bit comical - it is surrounded by super-modern skyscrapers, and directly opposite is the Mecca of Commerce, Rockefeller Center. Against their background, the giant 100-meter-long cathedral conceived by the giant looks like a strange relic. But everything changes if you go inside.

The entrance is framed by 8-ton bronze gates with images of saints and biblical scenes. The length of the cathedral from the main entrance to the opposite wall is 101 meters. Because of the very high arches, elongated sculptures and vertical elements of the painting, it seems even more voluminous than it is. It creates a feeling of immense space and grandeur. The building can simultaneously accommodate up to 2,200 people.

Lighted cathedral mainly due to stained glass. And it gives +500 to the atmosphere and even somehow muffles the tourist noise. In the cathedral daily services are held on which you can attend. 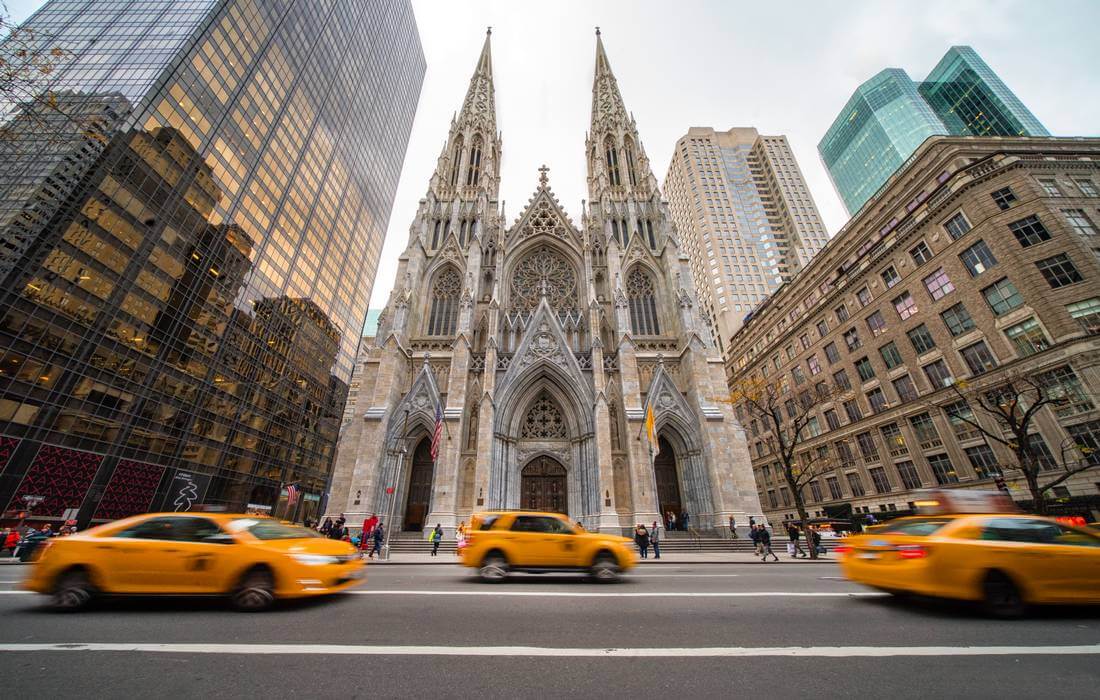 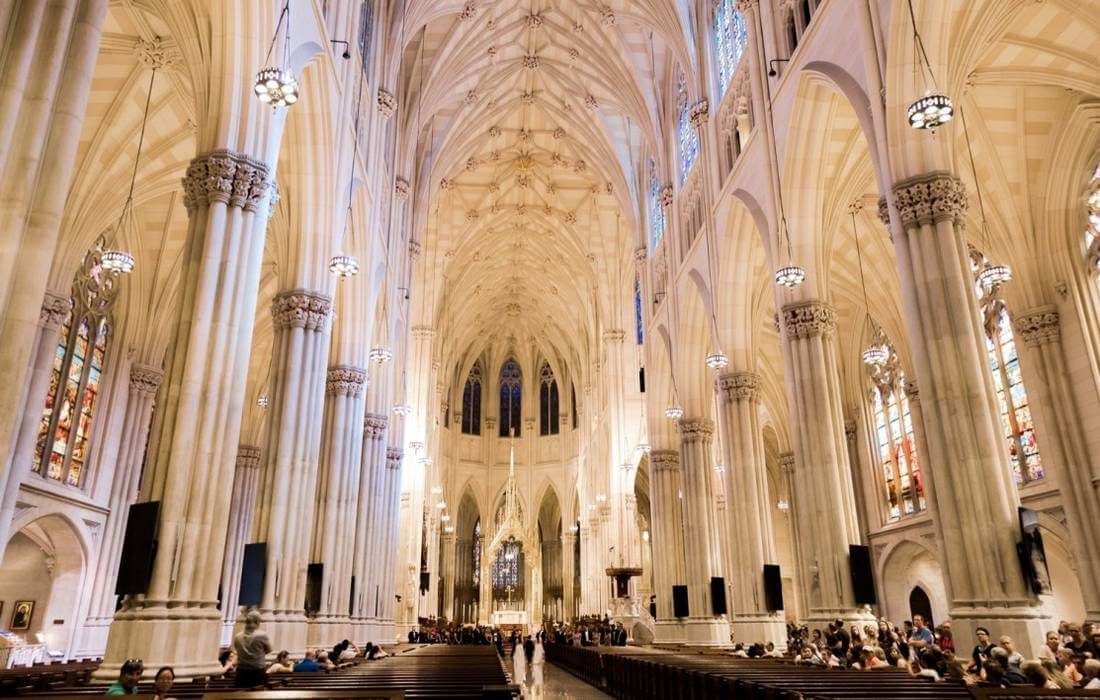 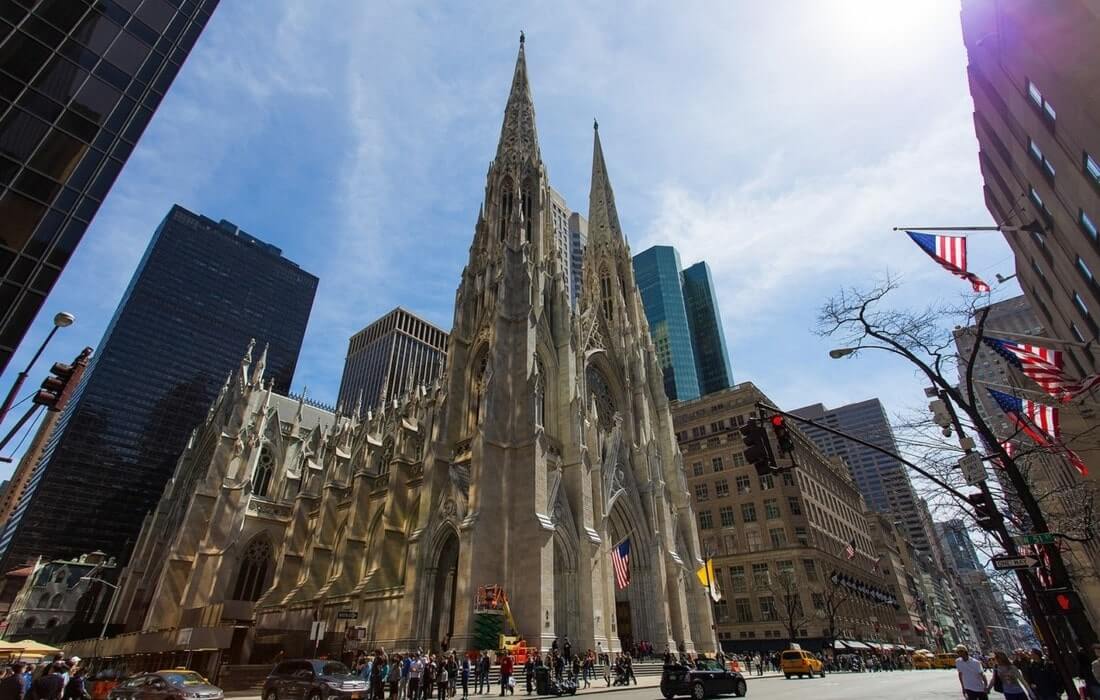 What you need to pay

There are two ways to go to the cathedral - as a tourist and as an ordinary parishioner. For both, it is not necessary to be a believer, but the wallet will be needed for sure.

Admission is formally free, but tourists are advised to leave donations. The site of the cathedral is proposed to make it in the amount of $5, but if you want to donate more, no one will stop. Donations are being restored, and as we have said, in the case of St. Patrick’s Cathedral this is an important and regular process. If you want to put candles, each will cost $2. A local guide or priest, who will conduct a tour and tell about the history of the building, will take approximately $15-25.

As a parishioner or simply an observer when traveling "savage" you will not be expected to donate at the entrance. But be sure to collect at the exit: at the end of the service also collect money for various good deeds - preserving the temple, helping the victims, and so on.

The most spectacular, but at the same time the most crowded day, when you should visit the cathedral is St. Patrick's Day, March 17th. It is in this cathedral that a large mass with a parade is held: the crowd, dressed in green, passes around the building and all the nearest quarters. In 2018, more than 2 million people participated in such a parade. Around the holiday fair takes place, people get to know each other, drink together and have fun in every possible way.

St. Patrick's Cathedral in New York is no boring gothic building. It magically integrates into the metropolis and does not interfere with the general rhythm, but only adds color.

Want to feel the thrill, standing inside the Cathedral of St. Patrick? Then to you to us - American Butler experts will offer the best excursions to this and other sights of New York.
Send a request
Also read
Broadway
Broadway is not just one musical theater or one street, as many people think. Broadway is a New York mini-universe with an entire scattering of theaters, clubs and concert halls. Read more
Rockefeller Center
The Rockefeller Center fully reflects the ambitions of its creators. If someone else follows the “house, tree, son” formula, here is an example to follow: to build 19 skyscrapers in Manhattan… Read more
Chrysler Building
Chrysler Building is one of the most elegant skyscrapers in New York. For 80 years, he has headed all the ratings of the most beautiful buildings in the USA. Is there really what is called expensive-rich… Read more
Ground Zero
Ground Zero is one of the oldest shopping districts in Manhattan. He experienced great glory, and great sorrow, but that is why he only became stronger. We will tell about Ground Zero of two epochs, the… Read more
How to organize a rest in Miami
Always dreamed of visiting Miami, but consider that it is too expensive and unattainable? In fact, a trip to this wonderful city can be arranged without the help of travel agencies and intermediaries.… Читать еще
Credit history
America lives on credit - everybody knows it. But how do the Americans manage not to get caught up in debt? We will help to understand this issue and not to break the eye of complex terms. The new material… Читать еще
Ralph Lauren
Читать еще
US Michelin restaurants
We continue the theme of restaurants! We take above - restaurants throughout America. And not just good, but the best of the best. So, the top 10 three-star restaurants according to the Red Michelin Guide.… Читать еще
Mission Trails
Mission Trails Park is San Diego's largest wildlife sanctuary and its pearl. There are about 600 different species of plants, including more than 300 varieties of wildflowers. Читать еще
St. Patrick's Cathedral 5 1 0 0
Sharing: