Flatiron Building is not just an eccentric building in downtown New York City. This is Chicago luxury, the consulate of the Russian Empire and the curse for women. But first things first.

Initially, the Flatiron Building was in the place of nothing interesting - just a luxurious but boring 4-storey hotel. The triangular piece of land on which he stood was formed by chance: as the junction of the roads of Fifth Avenue and curved Broadway. But this did not bother anyone, from 1855 to 1880 there stood the Hotel Saint-Germain mentioned above. 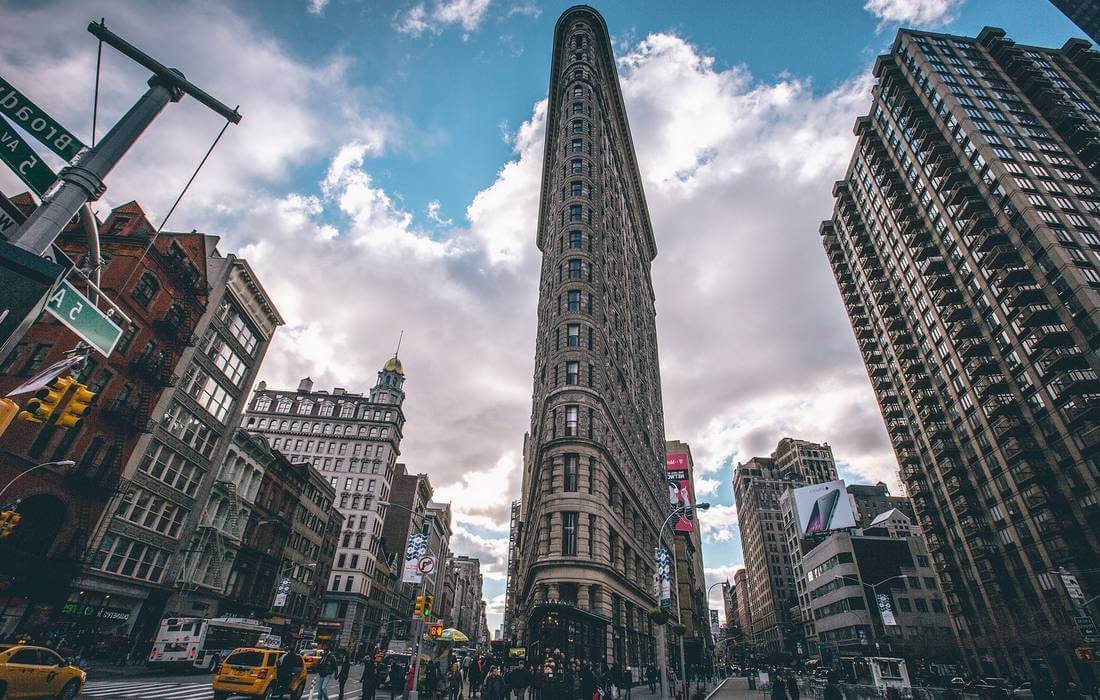 Why a triangle and when they put the "iron"

After the new owner of the site, he demolished everything and built on it again the usual residential 7-storey building of The Cumberland and several small shops. The buildings around were lower, so the wall of a block of flats, facing 23rd Street and Madison Square Park, was used as a high billboard.

The place turned out to be convenient for review - fresh newspaper reports and very beautiful advertisements appeared on the wall. More and more citizens gathered on the "triangle" to find out the latest news, trendy things and at the same time to discuss them with others.

A bit later. In 1989, the site again hit the auction. This time, it was bought by the owner of a construction company, George Fuller. In a haunting place, he decided to put the headquarters. The project took the architect from Chicago, Daniel Bern. For 1901, he was still a rebel, many of his buildings were initially called "Bernese nonsense".

He proposed an innovative solution - not to cut out rectangular pieces, but to make a high-rise building in the form of an “island”, without narrowing to the top. Such is the triangular briquette in the style of Chicago tenement houses. Already it will stand out among the residences of the rich. In addition, the authorities had just lifted the ceiling restriction on buildings. Fuller waved his hand and agreed.

By 1902 the 22-storey building of the Fuller Building was ready. It stood on a steel frame and was faced with fashionable then terracotta. The shape of the building seemed to be different from different points of view - on one side it seemed completely flat and shocked the townspeople. Burnham was right to work out. 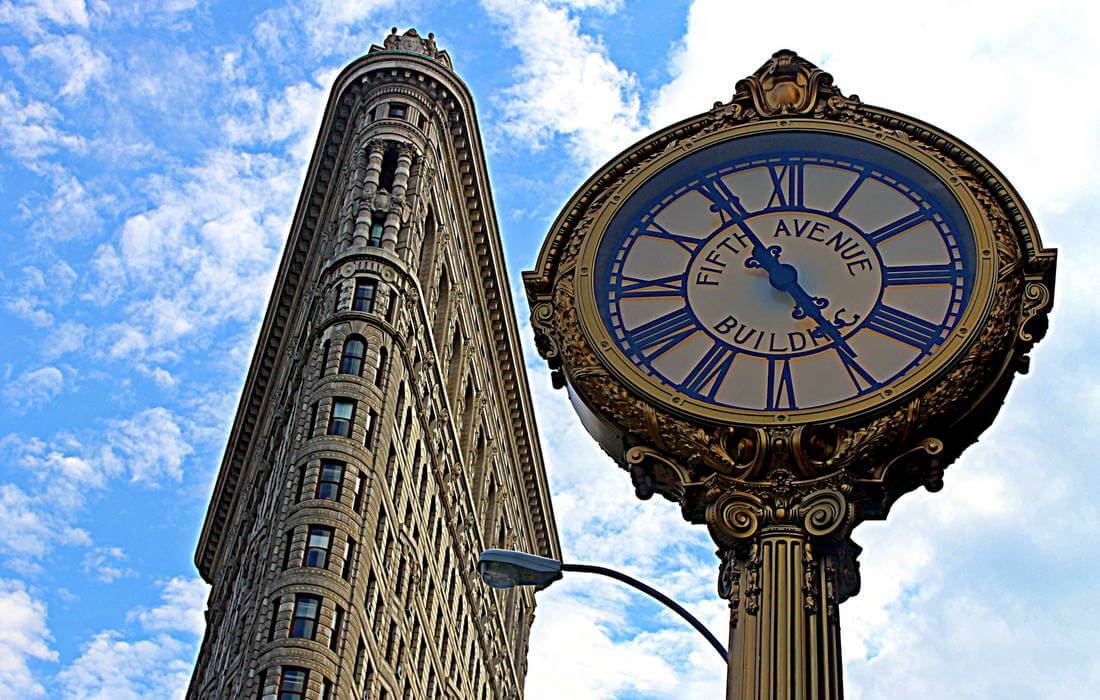 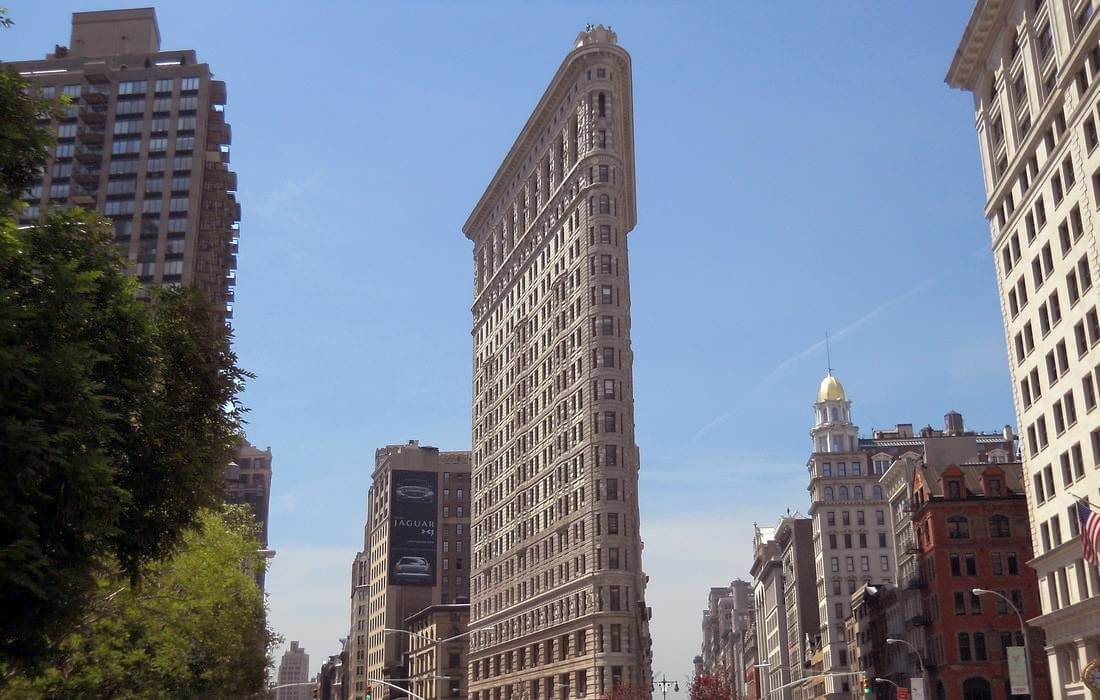 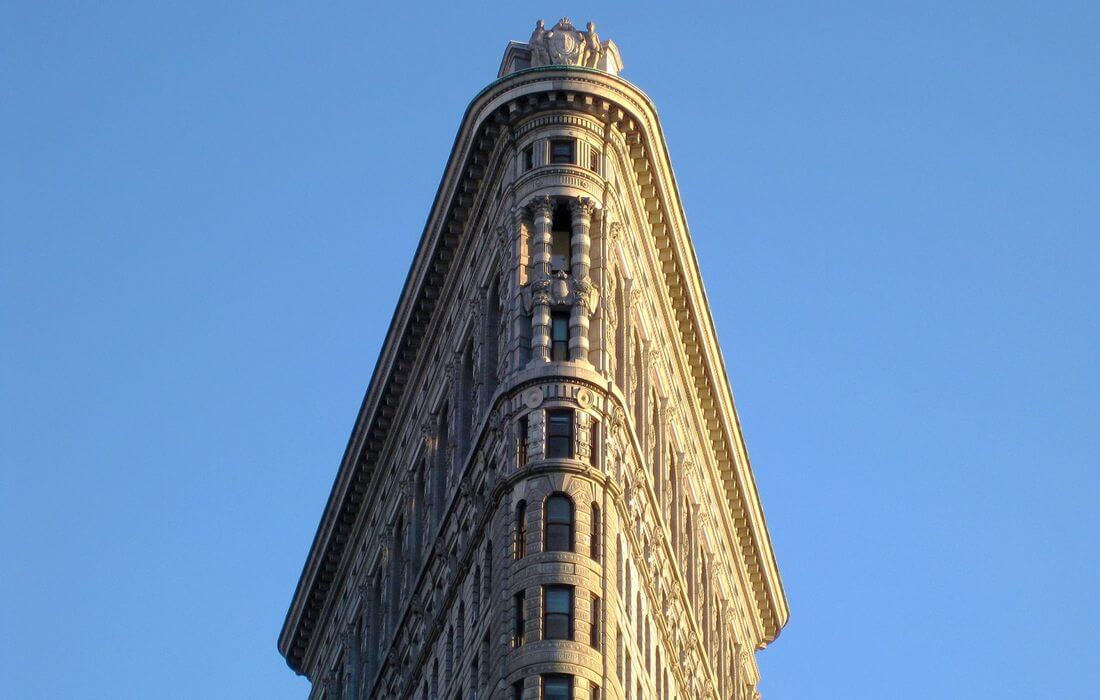 Not everyone liked the skyscraper. The conservative public has criticized Fuller Building to pieces, calling it “absurd” and “iron”. The youth objected - yes, iron, and what's wrong with that? At least something interesting in a heap of identical buildings. From disputes went and the new popular name - Flatiron-Building, literally "building-iron". It became so rooted in society that it soon became official, and Fuller's fame sank in the popularity of the place itself.

However, the youth had one more reason to love this place, more abruptly than the innovative form of the skyscraper.

In addition to connoisseurs of architecture, people with hormones playing regularly pulled up to the building. It was on this section of Fifth Avenue that there were always a lot of shops, where a huge number of women went. And if before everything was in order, then, as soon as the Flatiron building appeared, the skirts of the city women began to fly up to their ears - Marilyn Monroe with fans did not even dream.

The fact is that the corner of the building opposite the park creates a special twist of air - when it rushes, it sharply go up. Skirts, hats and other loosely fitting items of clothing such a flow raises easily. For the beginning of the twentieth century in Puritan America such a free daily show was super in demand. The police even had a special slang: for example, the phrase “23 skidoo” meant “stop staring and take your legs along 23rd street until a baton arrives”.

Fuller's vain idea failed - it failed to make the building its own family and business pride. They forgot about his company and himself so quickly that after a couple of years he built a new, boring and ordinary skyscraper, called it again Fuller Building and moved the company's office there.

Over the years, there were the consulate of the Russian Empire, the editorial offices of New York newspapers and magazines, restaurants and offices of transnational corporations. Today, the lower floors of the building are occupied by shops, beauty salons and sports clubs, while the rest are rented by publishers. However, the current owner plans to open a five-star hotel in the building.

Anyone can visit the Flatiron Building and view it from the best angles. But not by him alone!

To get acquainted with all the places of worship in New York, contact us at American Butler. With our tours you will not miss a single detail.
Send a request
New York
Sights
Festivals
New York City Restaurants
New York Parks
New York Museums