Gallier Hall - the most important building, built in the pre-war period of New Orleans. This impressive house was created by an outstanding architect, James Gallier.

The building has passed the history from the town hall to the museum and stands out for its rich decoration. Let's look at it in more detail.

The story of Gallier Hall

James Galliere was born in Ireland. He immigrated to the United States in 1832 and worked in New York for two years. When James arrived in New Orleans, he changed his last name from Gallagher to Galliere to pass for French.

Being an architect in 1845 he managed to start working on the residence of the government. Well, or failed, depending on how you look.

Construction took place at the height of the conflict between the Americans and the Creoles. At that moment, New Orleans was divided into departments. They were divided into municipalities, in which representatives of different factions sat. Two dominated: American and Creole. 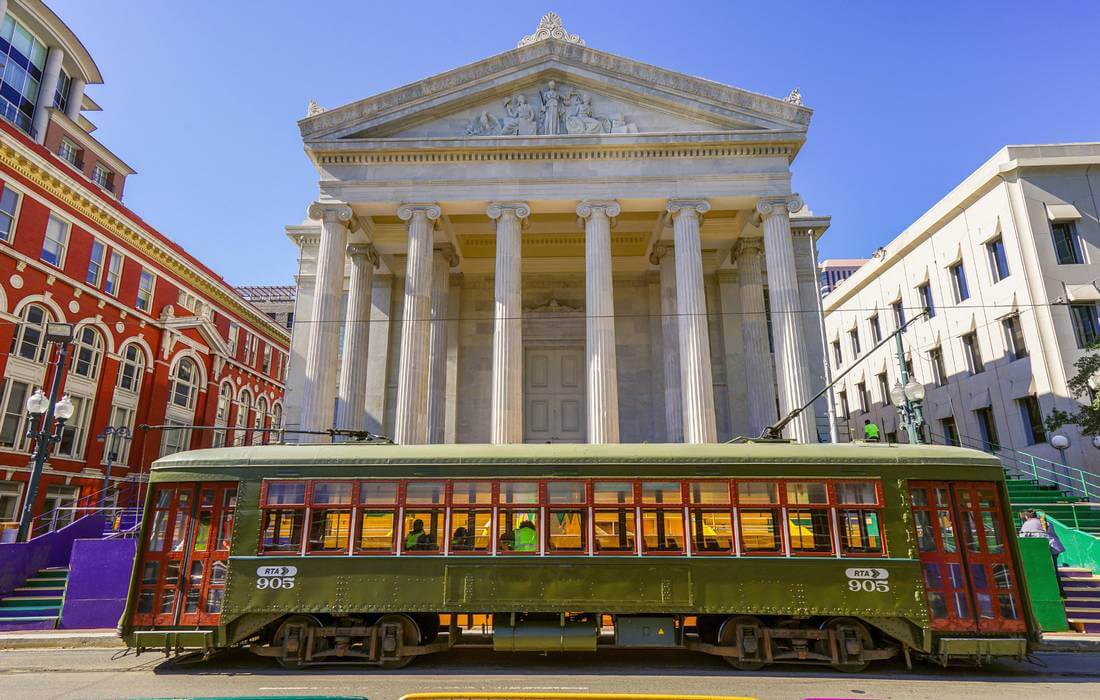 The Creole fraction did not like the American one for squandering money from the budget to the municipalities with lots of amenities. The Municipal Hall that was built was the last straw. The building drained the city’s budget, so the construction stalled right at the beginning of construction — the workers managed to build only a basement.

To avoid the anger of the Creole, a roof was installed in a hurry above the basement and the building was proclaimed by the police station. Managers focused on raising money to complete construction.

By 1853 construction was finally completed. The final result was impressive luxury. The house was three floors, 90 feet wide and 215 feet long. It was built from Takakho marble, the same marble as the Washington Monument. One hundred years later, the city hall was moved to another street. And this building was renamed Gallier Hall, restored and turned into a museum.

In 1975, the house was declared a National Historic Landmark. The Ella West Freeman Foundation donated property to the University of Tulane in 1986. After a decade of leadership, the university transferred the house to the non-profit organization Woman's Exchange.

In 2014 a large piece of the facade of the building fell to the ground. No one was hurt, although the piece fell right on the place traditionally meant for the mayor and other dignitaries to watch the Mardi Gras parade. Spectator stands moved across the road. Started overhaul. The works on the restoration of the facade of the building were completed on time to Mardi Gras in 2016. Interior works include painting walls, restoring floors, refitting electricians, as well as repairing furniture and paintings.

In May 2018, in time for the celebration of the 300th anniversary of the city, they completed another major overhaul of the interior and exterior. 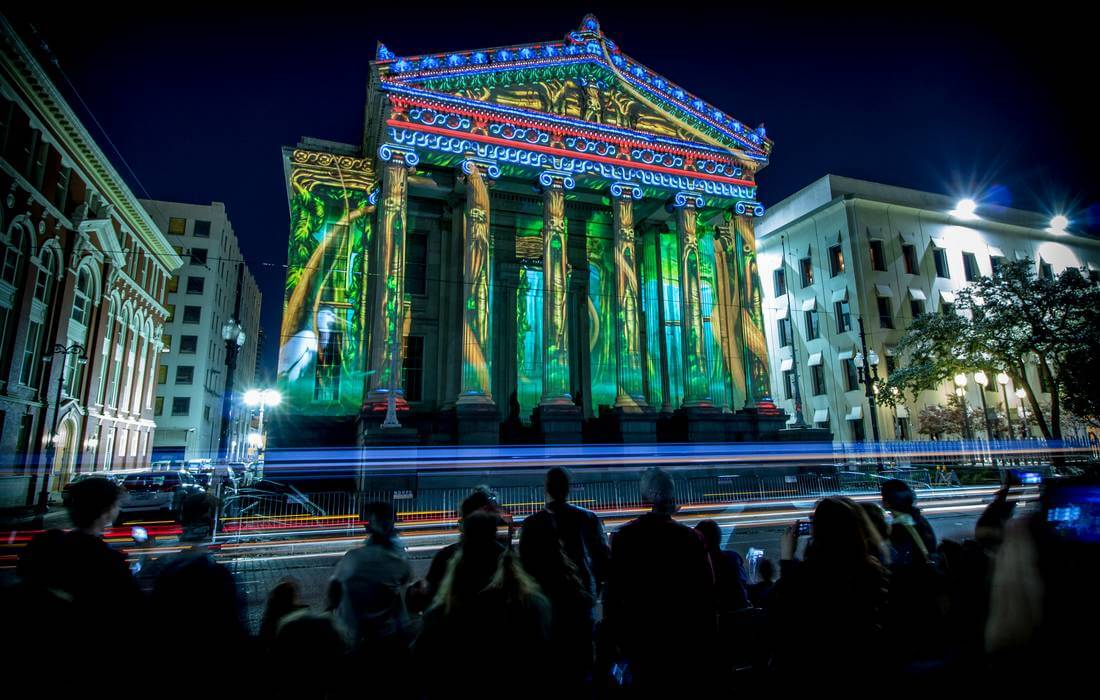 Features of the interior and exterior

House possesses open plan. When you go inside, you see one of the two rooms. They are richly decorated and boast rare luxuries of the time, including the internal kitchen (at that time most of the kitchens were outside). It also has hot and cold water - an invisible one for the XIX century.

The exterior of the house is also unique. Wrought iron, which was used in the house, made to order. You will not find such a forging anywhere else in the French Quarter. Four iron columns they hold a balcony that extends from the second floor and four forged arches that come off the balcony and extend to the roof. There are four huge windows with a balcony.

In addition, there used to be slave offices and a garden behind the house. The front was a roadway typical of that period.

Many important personalities lie in the house after death. At one time the remains of the first and last president of the Confederate Jefferson Davis and Major Pierre Beauregard were exhibited in the building. More recently, jazz musician Danny Barker and local R & B legend Ernie Kay - Dow were honored. 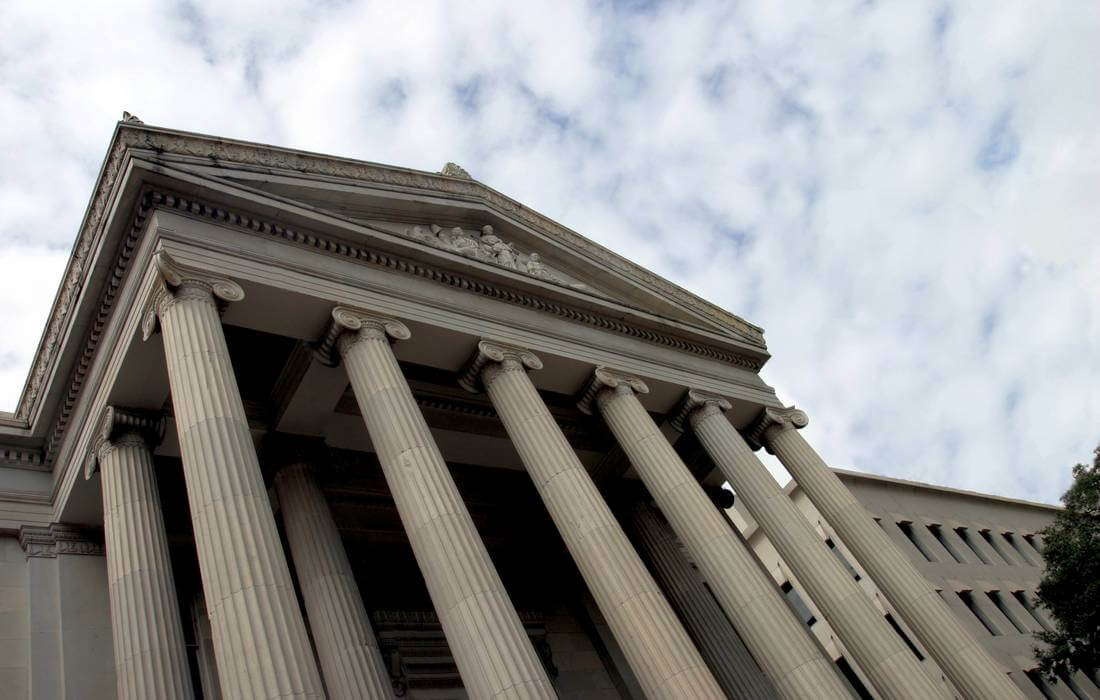 In recent years, Gallier Hall was presented at the annual LUNA Fete event. 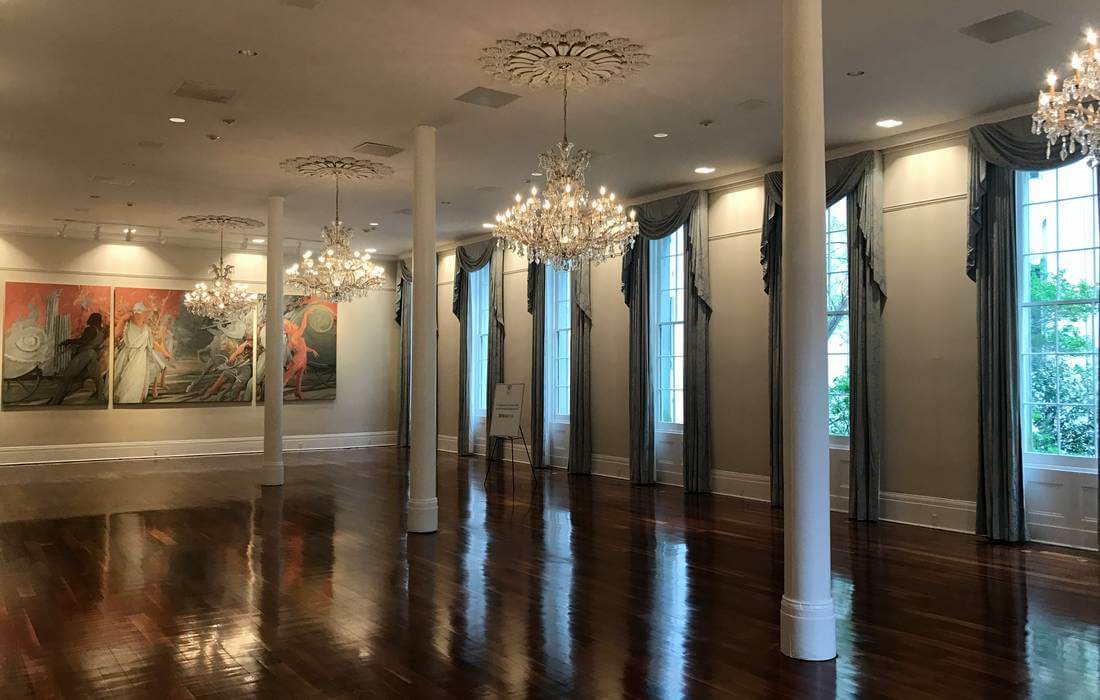 The free event demonstrates illuminated installations, digital sculptures and other advanced art. In 2014 and 2016, the event included an animated video projection on the facade of the building.

Although Gallier Hall is the most famous home of James Gallier in New Orleans, he is credited with designing and building other famous buildings: The St.Charles Exchange Hotel and Pontalba Apartment Buildings . He is also credited with completing work on the St. Patrick's Church.

The Gallier Hall has an extensive collection of 41 paintings and various decorative objects, many of which are gifts from foreign countries.

The collection includes paintings by George Washington, Andrew Jackson, the Marquis de Lafayette and Etienne de Boré, as well as the work of local artist George Duro. Decorative objects include antique frames and mirrors, a clock and 33 chandeliers.

Although the house is no longer the seat of the city government, it still holds a special place in the hearts of the people of New Orleans. He continues to host important city events, and remains the center of the Mardi Gras.

The building encompasses both the beauty of the city and the value of history and traditions, symbolizing how the city moves forward, renewing and improving with time.

And you can admire the beauty of the museum by ordering a tour of New Orleans from American Butler!
Send a request
Also read
Nicholas Girod House
The house of Nicolas Girod, he is the house of Napoleon is a three-story brick stucco building with a hipped roof and a dome. The house was recognized as a National Historic Landmark in 1970, as… Read more
St. Louis Cemetery
St. Louis Cemetery is the oldest cemetery in New Orleans. It was opened in 1789, when the previous burial could not withstand the growing population of the city. This is a complex of 3 separate cemeteries.… Read more
Royal Street
Royal Street is a street in the French quarter of New Orleans, Louisiana. This is one of the original streets of the city, dating from the beginning of the 18th century. Known for antique shops, art galleries… Read more
French Quarter
The French Quarter is the only untouched colonial settlement left in the United States. This is the historic center of New Orleans, which since 1718 has withstood hurricanes, floods, fires, yellow fever… Read more
Holidays in Miami
Читать еще
US Visas
How to get a visa in the US alone? Every yesterday's applicant will tell his story. Often reviews are contradictory. For some, it was one of the easiest visas, for others - an unjustified refusal. But… Читать еще
Walt Disney
Disney cartoons are forever. Who did not cry under the "Lion King" and "The Little Mermaid", did not hang out in front of the "Cinderella" and did not try to speak like Donald Duck? But usually we see… Читать еще
Italian restaurants in Miami
Florida's best trattorias elevate the spiritual simplicity of the kitchen to unattainable heights and help visitors to appreciate the authentic flavors of the country's characteristic culinary regions.… Читать еще
Craft Contemporary
Craft Contemporary is a building with more than half a century of history, a gallery of folk art. Since Los Angeles has become an important international art center, the Museum of Crafts and Folk Art… Читать еще
Gallier Hall 5 1 0 0
Sharing: