Although there are many coffee shops in New Orleans, and many of them are located in beautiful and historic quarters, not one is more recognized than Café du Monde. A trip to New Orleans will not be complete without visiting this attraction.

The cafe is located in the French Quarter of New Orleans. Opened coffee shop 24 hours a day, seven days a week, except for Christmas. Institution lit songs, novels, television shows and movies. Branded ground blended coffee can be found in restaurants, shops and supermarkets countrywide.

Coffee first came to North America through New Orleans, beginning in the middle of the 18th century. French colonists brought coffee with them when they settled along the Mississippi. Later, with the beginning of the Civil War, the shortage of coffee began - they began to replace it with chicory. 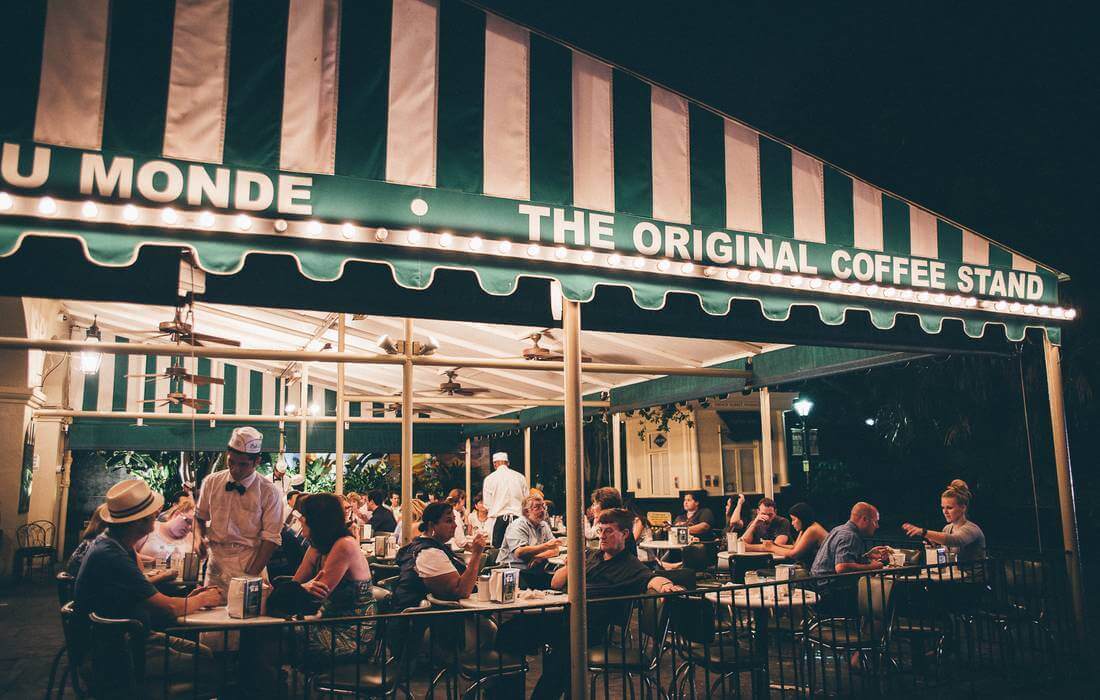 Chicory is more bitter than coffee, but less sour. It has less caffeine than a cup of coffee, so people usually drank two cups for maximum vigor.

It was the 19th century. Port of New Orleans - the largest center of the coffee industry. Bitter brew has become extremely popular. Tents spread throughout the city, especially near the embankment, which is now spread out french market.

In 1862, businessman Fred Keniger opened a new coffee shop in the meat market building so that visitors could drink coffee and treat themselves to fried donuts before shopping. So was born Cafe du Monde.

In May 1942 the cafe was bought by the Fernandez family - it still owns the establishment. The secret of the prosperity of the cafe is a good location in the French market, which has long been the main center of trade.

The first Cafe du Monde outside New Orleans appeared... in Japan. Representatives of the Duskin corporation persuaded the owners of 6 years before opening an institution in Japan in the early 1990s. Most citizens still do not know about this fact.

The cafe was unplanned closed on August 27, 2005 - at this moment hurricane Katrina raged. Despite minor damage, the restaurant did not open for another two months. Solemn reopened it only in October.

The opening was predictably accompanied by a long line of people at the entrance.

The restaurant is so popular that by 2015 became the most popular place in Louisiana by the number of photos on Instagram.

The menu in this cult eatery has not changed much since the days of the Civil War: coffee, beignets, hot chocolate, milk and freshly squeezed orange juice. Since the end of the 80s, carbonated drinks and cold coffee have appeared.

The specialty cafés au lait in the establishment is mixed with chicory and warm milk. Chicory gives coffee a strong but bitter taste. Many people offer to combine coffee with beige.

Bénier (Beignets) is the main attraction of the cafe. These are crispy on the outside, soft on the inside and powdered square sugar donuts. The sweetness of icing sugar cakes helps balance the bitterness of coffee. Sometimes they are served with fruit, jam or maple syrup. Easy to eat three of these alone, and, frankly, why not?

In 2007 the city rabbi made his mission to certify Cafe du Monde as a kosher establishment. Own bender and coffee blend appeared as early as next year to Hanukkah. 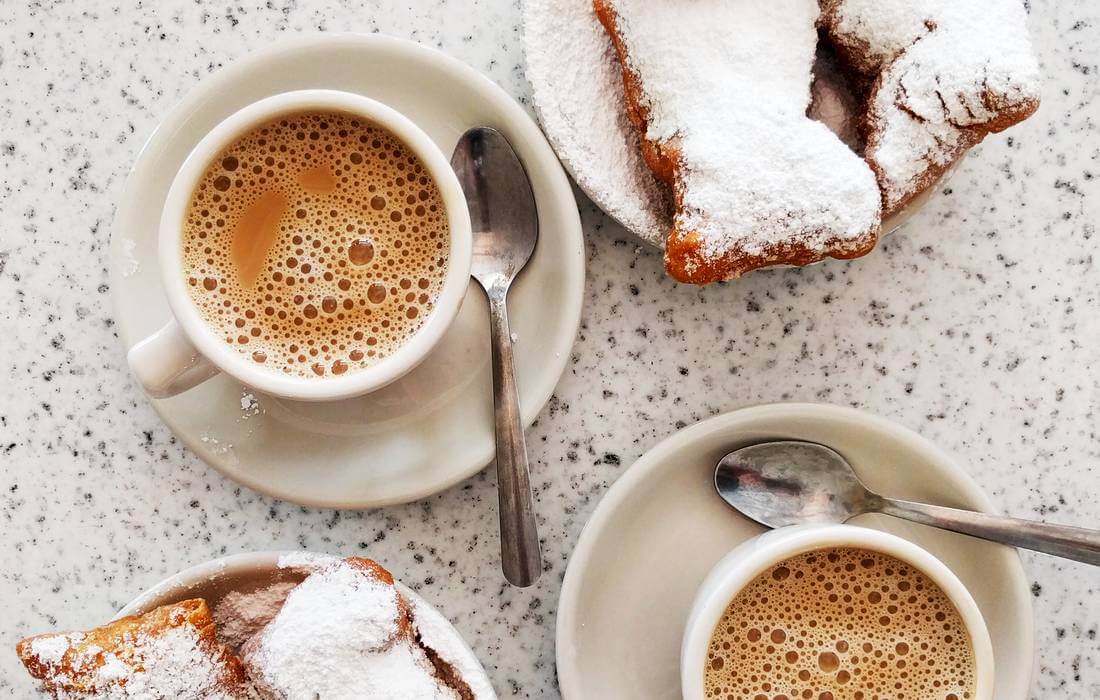 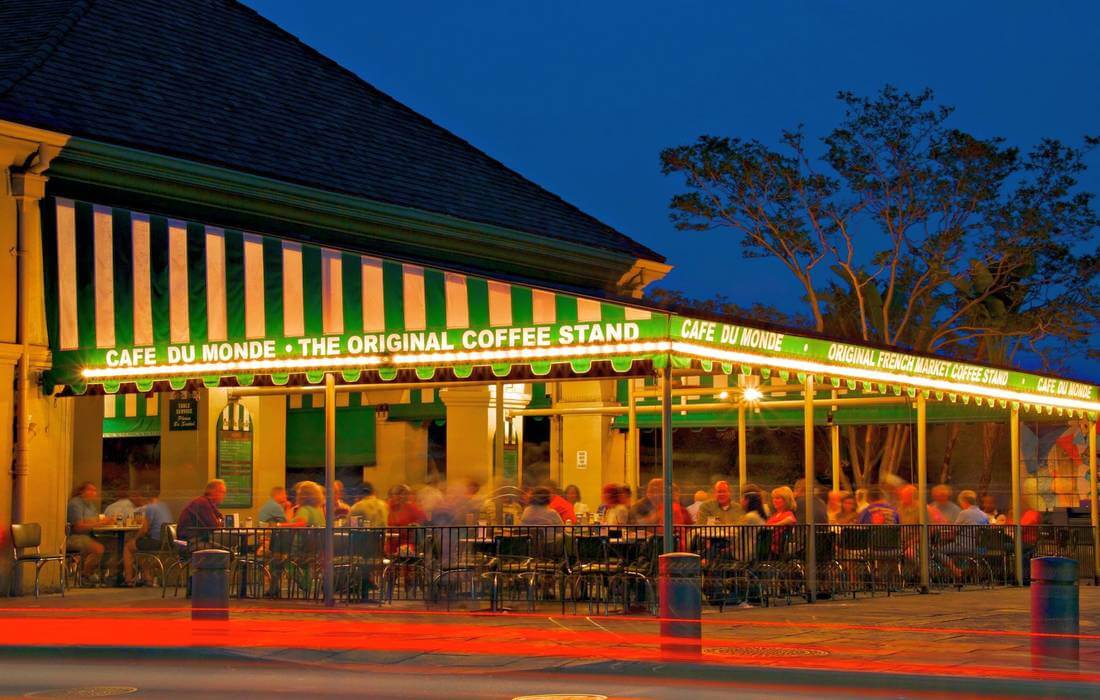 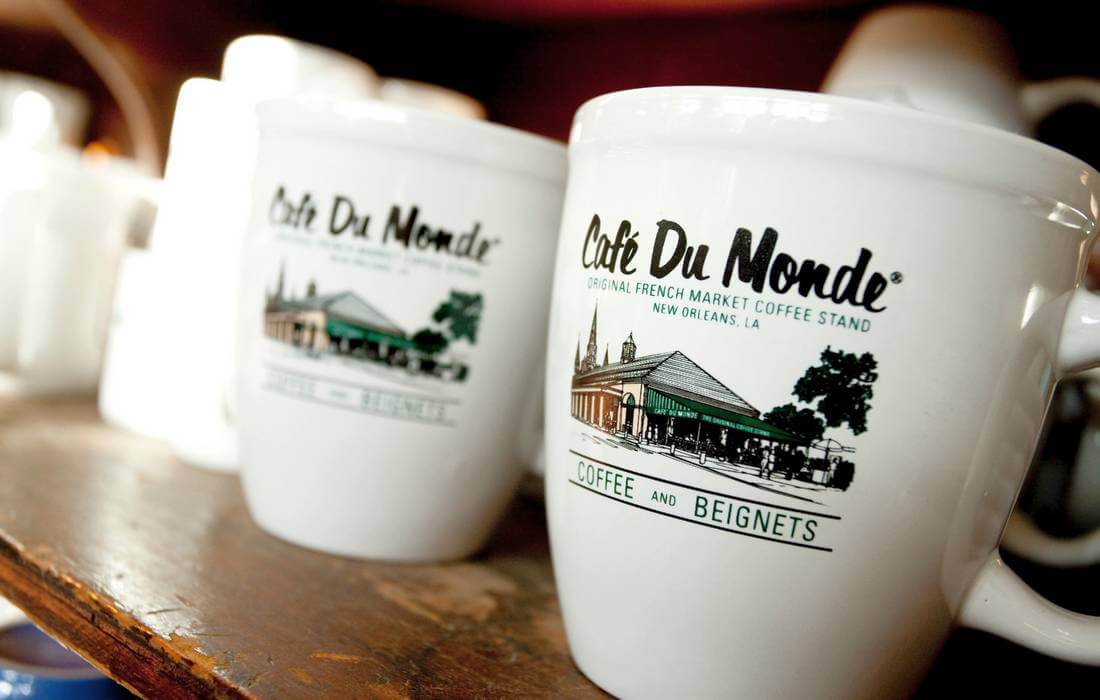 The quality of coffee and coffee remains stable since the time of its foundation, and the view of Jackson Square from the tables is legendary. This does not mean that the cafe is not without flaws. There are a lot of people here, especially during breakfast, and powdered sugar leaves a sticky sheen on everything - on the floor, chairs, tables. However, none of these things are critical.

Keep Cafe du Monde in your list of required visits, especially if you first visited New Orleans. In the rapidly developing modern world, where we are constantly forced to make decisions, an old-fashioned coffee house makes life easier. Come here and immerse yourself in the relaxed atmosphere of New Orleans.

And the American Butler travel agency will help you visit New Orleans. Request a call - we will contact you and make an individual tour of the city.
Send a request
Also read
French Quarter
The French Quarter is the only untouched colonial settlement left in the United States. This is the historic center of New Orleans, which since 1718 has withstood hurricanes, floods, fires, yellow fever… Read more
Royal Street
Royal Street is a street in the French quarter of New Orleans, Louisiana. This is one of the original streets of the city, dating from the beginning of the 18th century. Known for antique shops, art galleries… Read more
St. Louis Cemetery
St. Louis Cemetery is the oldest cemetery in New Orleans. It was opened in 1789, when the previous burial could not withstand the growing population of the city. This is a complex of 3 separate cemeteries.… Read more
Church of St. Alphonsus
The Church of St. Alphons is a historic building of a former church on Konstanz Street in New Orleans, Louisiana. Completed in 1857, it is one of the few that has preserved the national image of a rich… Read more
Boardwalks in the USA
Читать еще
Buying a home in Miami
Читать еще
Al Capone Story
The world is full of atrocities at all times, but the 20s years of the 20th century became the most cruel and riotous for America. But the times of Prohibition and the Great Depression turned out to be… Читать еще
French Restaurants in Miami
The French know no boundaries when it comes to expressing love. It can be seen not only in words, but also in cooking. While in Miami, take a look at one of the restaurants on this list: Palme d'Or at… Читать еще
Hoover Dam
Hoover Dam is one of the highest dams in the world, and at the same time a powerful hydroelectric power station. Tourists and residents come here to see the incredible scale of construction, go boating,… Читать еще
Craft Contemporary
Craft Contemporary is a building with more than half a century of history, a gallery of folk art. Since Los Angeles has become an important international art center, the Museum of Crafts and Folk Art… Читать еще
Cafe du Monde 5 1 0 0
Sharing: