Maurice A. Ferre Park (Museum Park) is a huge municipal complex in the open air, located on the archipelagos of Downtown Miami. The recreation area occupies a space of 12 hectares.

Its grand opening was timed to coincide with the bicentennial birthday of Independence of the country. The United States celebrated the grand anniversary on a grand scale in 1976. In this regard, sometimes the park is called Bicentennial. But on January 31, 2019, it was renamed in honor of the former mayor Maurice A. Ferre.

Initially, from 1900 to the middle of 1960, the cargo and passenger sea terminal of the city of Miami functioned on the site of the park. Numerous cargoes, warehouses and office premises of the Clyde Mallory trading enterprise were located practically on the whole island. 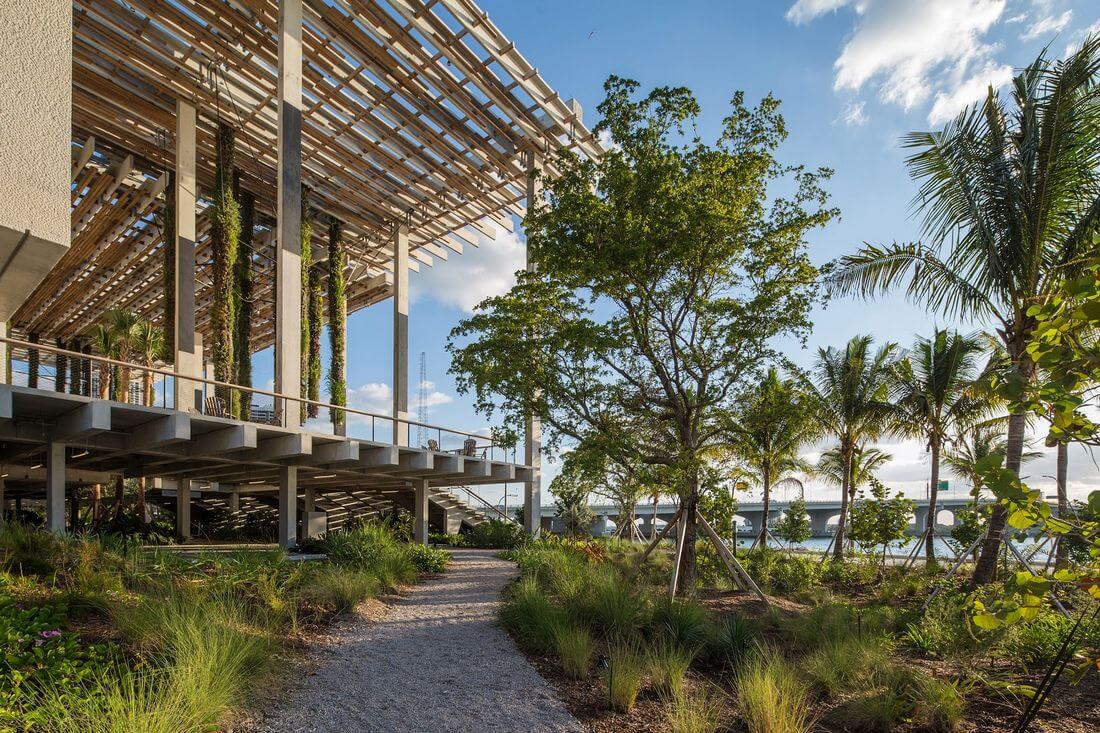 Closer to the 1970s, the port changed its location, moving to the neighboring archipelago - Dodge Island. After that, the territory was thoroughly cleaned from the waste products of industrial enterprises. And only after almost a decade, in 1976, the Bicentennial Park was opened on this site. That is the name the green recreation area of the townspeople and guests of the city received at the opening.

After Bayfront Park, this is the second largest place in Miami, where you can spend a carefree weekend. The development of the recreational complex and infrastructure does not stand still. So, since May 1994, you can get here by metro (Museum Park subway station).

Maurice A. Ferre Park is located in central Miami, south of the I-395 Expressway and east of Biscayne Boulevard. It spans thirty acres of the city's highlands, including approximately 2,600 feet of Biscayne Baywalk promenade and the Florida East Coast Railway (FEC) metro line overlooking the center and port of Miami, as well as Watson Island.

The eastern part of the park is washed by the waters of Biscayne Bay. Patrons and patrons are several public and municipal organizations. Near the park, two museums and a planetarium are opened, which contributes not only to healthy outdoor recreation, but also to cultural enrichment.

Why does the park have another name — Museum Park? The reason is simple: the Miami Dade Cultural Center is nearby. Museum exhibitions tell about the amazing history of the region. South Florida is a country of runaway slaves, Indians, gangsters, invaders, pirates, tourists, drug dealers and alligators. All together weaves into a vivid and exciting story that covers the time frame from the first aborigines to the last waves of emigration.

The hot climate of the southern coast of Florida has created a truly iconic public space. In the image of Central Park in New York, Park Guell in Barcelona and Balboa Park in San Diego, Miami Museum Park has become a first-class park on a global scale. Its visitors can spend their active and passive leisure here. 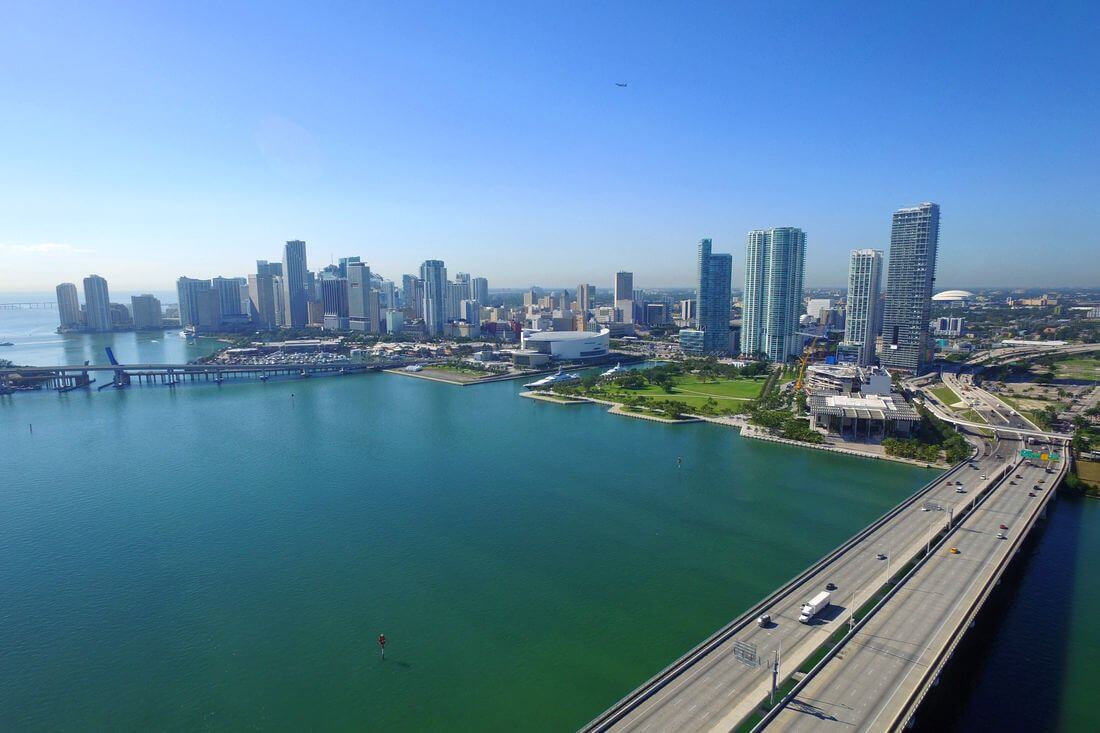 For this, all conditions are created:

The total capacity of the park is up to 45 thousand people. Repeatedly, the recreational zone became the stage for cultural events of various sizes:

In 2018, the Museum Museum Center named after Patricia and Philipp Frost opened in the Bicentennial Park. On the promenade avenue, which will provide pedestrian access to museums, $ 10 million was allocated. The road will pass along the new Embankment and Biscayne Bay Boulevard.

American Butler will introduce you to the most interesting places in Miami.

Book a sightseeing tour!
Send a request
Also read
Bill Sadowski Park
Bill Sadowski Park and Nature Center is an incredibly calm, refreshing and cozy corner that has preserved all the beauty of nature typical of the state of Florida. Not far from the metropolis is the presented… Read more
Anna Kolb Nature Center
Anne Kolb Nature Center is a park in the vicinity of Miami, located in Hollywood and opened in early February 1996. The complex consists of almost 600 hectares of coastal forests, mainly mangroves. A… Read more
Fairchild Tropical Botanic Garden
The real gem of Florida's sunniest state is the Fairchild Tropical Botanic Garden. This is almost 36 hectares of fertile land filled with tropical plants. Thus, it is the largest botanical garden… Read more
Matheson Hammock Park
Matheson Hammock Park is one of the oldest parks in the entire region, founded in the 30th year of the last century. Its founder was Earl W.J. Matheson. The total area is 255 hectares, in the northern… Read more
Miami Beaches
Читать еще
Credit history
America lives on credit - everybody knows it. But how do the Americans manage not to get caught up in debt? We will help to understand this issue and not to break the eye of complex terms. The new material… Читать еще
Ralph Lauren
Читать еще
French Restaurants in Miami
The French know no boundaries when it comes to expressing love. It can be seen not only in words, but also in cooking. While in Miami, take a look at one of the restaurants on this list: Palme d'Or at… Читать еще
Smoking in the USA
Smoking is the bad habit that infected the whole world from America. But modern Americans themselves are not particularly loyal to smoking. How it happened, let's try to figure it out. Читать еще
Atchafalaya Basin
The Atchafalaya Basin is the largest river swamp in the country, containing almost a million acres of bottom hardwood, marshes, flood and swampy lakes of America. The pool begins just outside Simmesport… Читать еще
Mount Charleston
The view of the snow-capped mountains seems a bit surreal when Las Vegas still feels the warmth of the desert sun. At 11,916 feet above sea level, Charleston Peak is covered in snow for more than six… Читать еще
Comic-Con International
Comic-Con is an exhibition that educates people about pop culture. The bet is on comics and related art forms. Organizers support public presentations and exhibitions on the historical contribution of… Читать еще
Maurice A. Ferre Park 5 1 0 0
Sharing: