Many have heard about the American city of Miami, where there is only one season - summer, and where the cleanest beaches in the world are spread. But few people know how contrasted it is at the same time absorbing the rich and chic neighborhoods where the largest financial institutions and trade conglomerates and the streets where refugees from the poorer Latin American countries, mostly Haitians and Cubans, live, find refuge. Generally, for every sixth out of ten inhabitants of these places, their native language is Spanish.

Downtown Miami is recognized as one of the most fashionable areas of Miami and is considered its heart: most of the urban skyscrapers, major retail outlets, cultural and entertainment facilities, and green spaces are located here.

Some draw parallels between Downtown and Dubai — the same mixture of luxury and urban architecture. Local attractions are the magnificent villas of the most influential and famous people of the planet, including Madonna and Julio Iglesias. 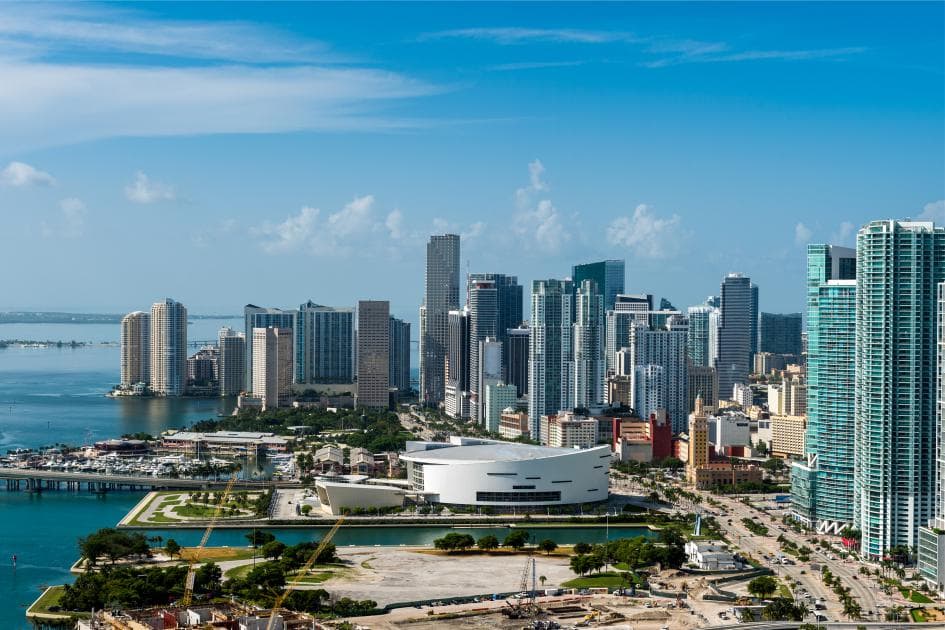 The main attractions of Downtown Miami

Travelers will not be bored in Downtown Miami. Our review will begin with one of the largest on the continent Center for the Performing Arts - Adrienne Arsht Center, located on both sides of Biscayne Boulevard. Its walls remember the voices of Elvis Presley, Luciano Pavarotti (who, by the way, was the owner of a luxurious mansion in the area), Rudi Velli. Star ballet troupes performed here and the Cleveland orchestra, which is wildly popular, played. Almost every day, various shows are held on the local stage, musicals and children's performances are staged.

Nearby is the central Gallery, and a little further away - the Wolfson Campus campus, in which educational buildings more than 20 thousand students study. In addition to training, there are constantly organized various general lectures covering the widest range - from art history to innovative technologies. By the way, there is no charge for visiting them. The campus is also known for its annual book exhibitions.

On the territory of Downtown Miami, there is also the Patricia and Phillip Frost Museum, which has a planetarium and an observatory.

The richest collection of exhibits is collected in two downtown museums - the historical HistoryMiami and the Perez Art Museum of Art. In the art gallery, tourists have the opportunity to get acquainted with the work of the brush as famous artists, among whom - Mendieta, Rauschenberg, Rosenquist, Stella, and their modern younger colleagues. Know-how of this museum - periodically held events in an interactive mode, as well as themed music and entertainment evenings. 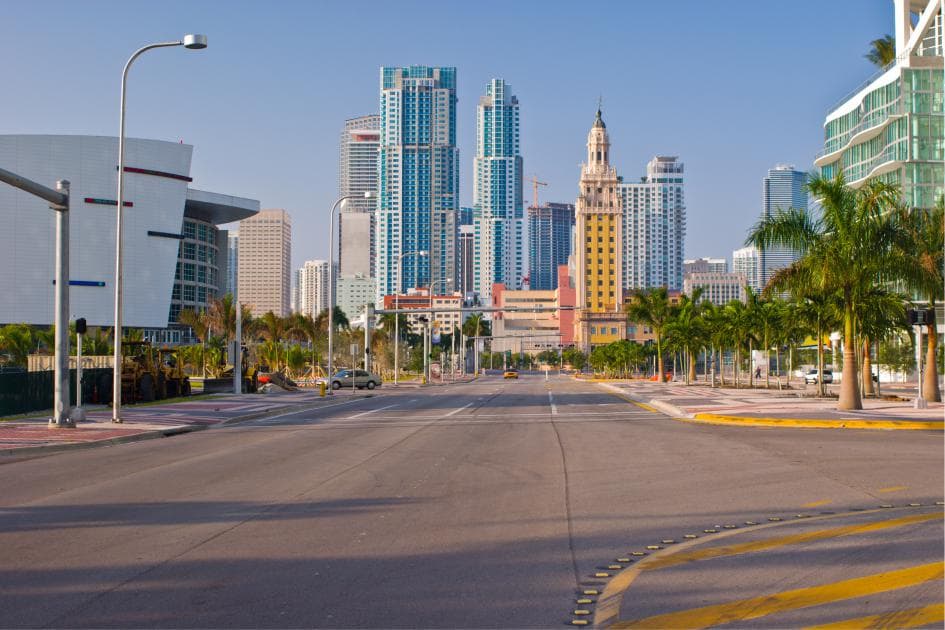 Places to drink and eat

A real gourmet will certainly be attracted by the Rooftop restaurant, which has chosen for itself the roof of the Touche strip club known throughout the state. In the small restaurant hall for fifty visitors you can not only feast on the exquisite creations of the classic Italian cuisine, but also admire the panorama of the city from an open terrace.

The menu of the other, favorite tourist eatery with the romantic name La Mancha, consists mainly of Pyrenean and Brazilian dishes, abundant in seafood and various meats, to the eyeballs stuffed with exotic spices.

Besides restaurants, Downtown Miami is famous for its bars and cafes. Excellent inexpensive lobsters for strong drinks can be enjoyed in the Tobacco Cafe, where the audience was once entertained by the American blues legend Guy and Hooker. At the Corner Cocktail Bar, you can taste almost fifteen varieties of cocktails, including exclusive Dahikri: Florida, with golden rum, Maraschino liqueur, freshly squeezed lime juice and cane sugar, as well as its other variant, attributed by Ernest Hemingway to rum - based on rum, liquor and grapefruit juice!

The local highlight recognized the inconspicuous in appearance, and made in the style of a rustic house among the seafront promenade, a small cafe “Garcia Seafood Grille”. Here you can have a delicious lunch with giant shrimps, sea crawfish or a perch on a skewer with crisp potatoes, and for dessert you can taste the fantastic taste of lime pie, which, by all accounts, has no equal in all of Florida. You should also pay attention to the new Seaspice restaurant with its amazing Sunday brunch and parties.

Where can I stop and make purchases?

Downtown Miami and the neighborhoods close to it are literally stuffed with first-class hotels, among which are the Hilton, Hyatt Regency, Mandarin Oriental, Mariott, Hampton and others - there is certainly no shortage of hotels!

As for shopping, first of all, you should visit the Bayside Marketplace, which holds the palm of the largest trading house. Rather, it’s just a long covered street on which boutiques, coffee houses and bars alternate. If you want to buy a brand - souvenirs, and even with significant discounts, then you need to visit one of the local outlets - in Dolphin Mall, for example, they reach 70 percent or more.

What else is worth seeing?

Being here and not going on an exciting walk on a yacht is simply not permissible! You have the choice between diving, fishing or just admiring the incredible ocean sunset from the snow-white beauty.

In the park area, you can take part in song and dance competitions and listen to free open-air concerts. In the northern part of the park complex, unique festivals are held with the participation of various nationalities living in these parts, the sounds of live music are heard everywhere, and youth groups gather in interest groups.

Available in Downtown Miami and its own Freedom Tower , received as a gift from the capital of Andalusia - Seville.

And if you want to just admire the urban landscape, you can use the free monorail carriages and look at all this beauty from above!

The history of Downtown Miami is inseparable from the past of the resort itself. Before the arrival of the Europeans at the beginning of the 16th century, the first of them were the Spanish conquistadors, the Miami Indian tribes lived here, which later gave their names to the localities, as well as the Simenols. The first European migrants began to settle in these parts already in the 1800s, gradually displacing the indigenous people.

The wealthiest of them immediately began buying up orange plantations and investing capital in urban planning and laying a railway line. Miami began to thrive, which was greatly facilitated by the miraculous climate of these places: the winter and summer temperatures hardly differ and stay at 30 degrees. At the end of the 19th century, city status was assigned to it.

Today, its population exceeds 4 million people - Miami is the largest metropolis of the southeastern United States. 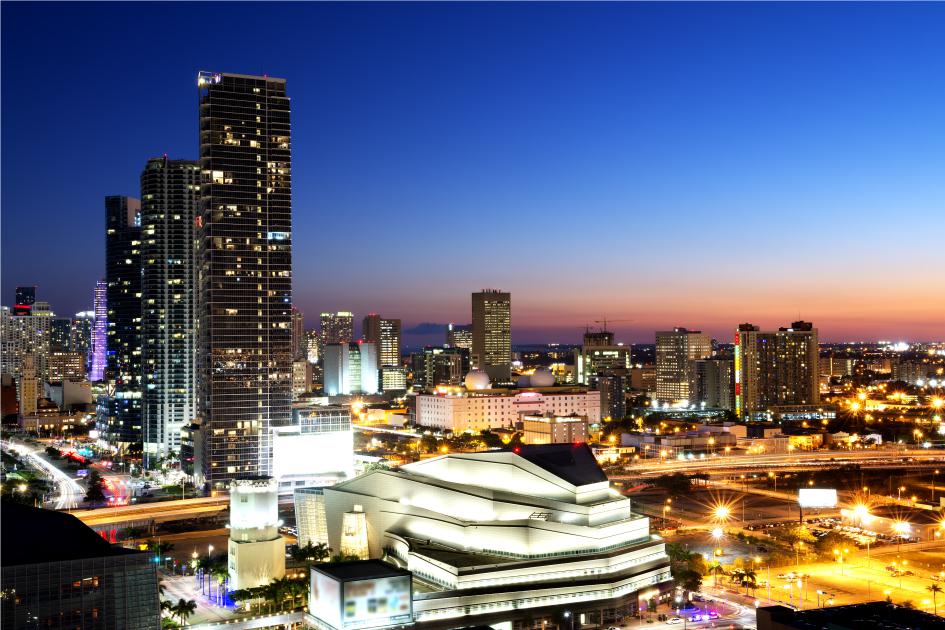 Our company not only organizes tours of any length for everyone. For those who are tired of the monotony and bustle of everyday life and are willing to invest money to buy property in this paradise, we will help you choose a permanent home or rent it in one of the city’s many ultra-modern residential complexes - Brickell, Biscayne, Emerald, and Four other condominiums.

Welcome to the dream with American Butler!
Send a request
Also read
Fisher Island
The city - the island of Fisher Island in Miami is famous for the highest per capita incomes regulated by access, exceptional landscape and outstanding people who stand behind its creation, development… Read more
Hallandale Beach
During its one hundred and twenty-year history, this city has traveled a dizzying path from a modest postal shop to one of the most vibrant entertainment centers in Florida, famous for its casinos, jumps… Read more
Hialeah Gardens
Hialeah Gardens is a city in Florida, in the United States of America, located in Miami-Dade County. Its population is just over 20 thousand people. There are often inscriptions and signs in Spanish,… Read more
Little Havana
Miami is a true paradise for lovers of holidays and stunningly interesting vacations. No wonder many tourists flock to this American city to spend their well-deserved vacation. What is the suburb of Little… Read more
Miami Beaches
Читать еще
How to get a mortgage in the US
Planning to buy property in the US, but you do not have enough money to buy a long-awaited home? You can ask for a mortgage loan in one of the US banks. In order to know all the conditions and rates,… Читать еще
Walt Disney
Disney cartoons are forever. Who did not cry under the "Lion King" and "The Little Mermaid", did not hang out in front of the "Cinderella" and did not try to speak like Donald Duck? But usually we see… Читать еще
Miami Design District Dining
After decades of decline, Design District has gained fame as a place for art, design and fashion. There are more than 130 art galleries, exhibition halls, creative services, architectural firms, luxury… Читать еще
Hoover Dam
Hoover Dam is one of the highest dams in the world, and at the same time a powerful hydroelectric power station. Tourists and residents come here to see the incredible scale of construction, go boating,… Читать еще
Craft Contemporary
Craft Contemporary is a building with more than half a century of history, a gallery of folk art. Since Los Angeles has become an important international art center, the Museum of Crafts and Folk Art… Читать еще
Downtown Miami 5 1 0 0
Sharing: