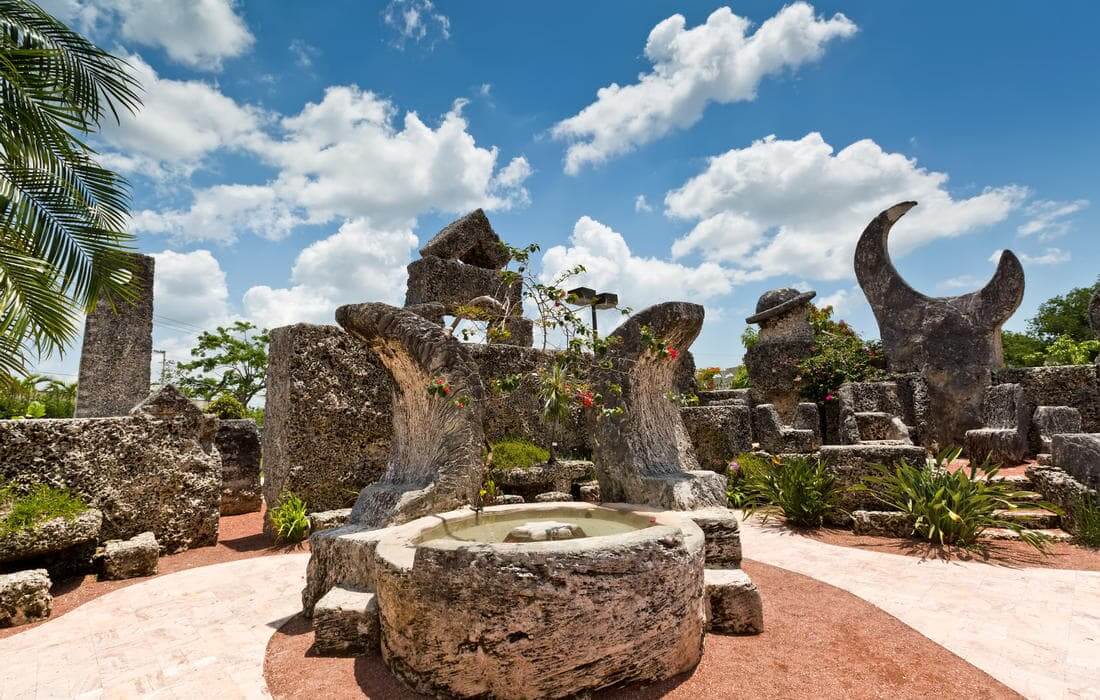 Coral Castle in Miami - one of the mysterious architectural sites of the area. This incredible museum is a fascinating and mysterious place. There are hidden many mysteries and historical events. Coral Castle was built not so long ago as the great castles of Europe, and its age barely reaches one hundred years. 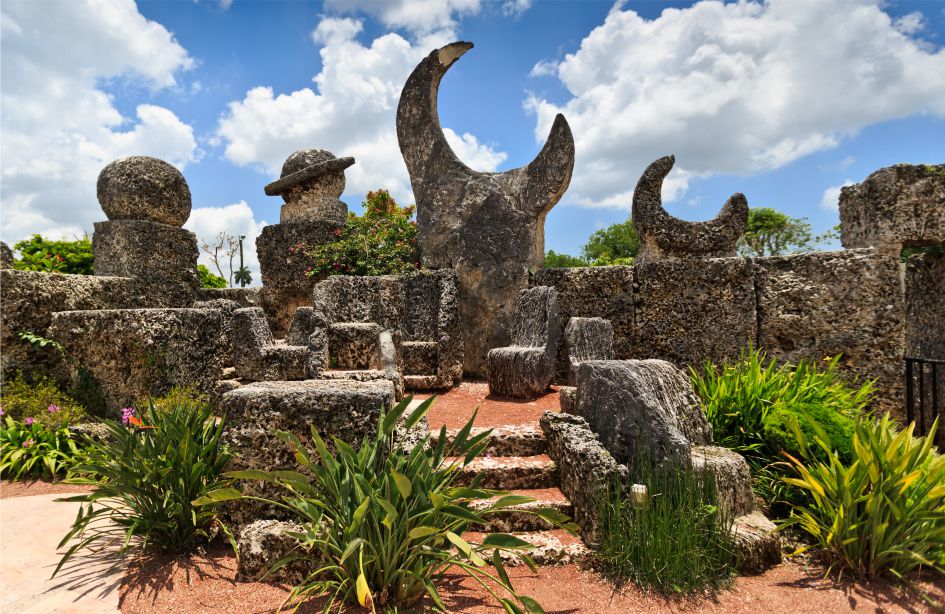 The unique building, located under the open sky, attracts not only ordinary tourists, but also many scientists. In the castle of Edward Lindskalnin regularly carried out various experiments. The territory is equally beautiful both day and night, but at night, incredible legends are born here!

An excursion to the mysterious castle will entice you to the love cycle of events of the stone master, whose mystery could not be solved.

Exquisite and charming, somewhat brutal and endlessly mysterious atmosphere reigns day and night. Each piece of furniture made of stone, art canvases and other exhibits are shrouded in a light halo of romance and passion, with the energy of history and events that took place in this Coral Castle for 100 years.

The museum is located a few kilometers from the small town of Homestead. Many call the historic building a true hymn of power and love.

The Coral Castle was erected by a man who was beloved because of his poverty and the lack of real estate. Then he moved to the USA, where he built this magnificent place in honor of his beloved, which eventually became a monument.

The creator of the house, Edward Lidskalnin, a native of Latvia, was a mason with no education. Like many Wonders of the World, Coral Castle has its own love story. After loving Edward made a proposal to 16-year-old Agnes, and was rejected, he went on a journey and settled in Homestead, South Florida, where he decided to build a dream home for a family that he would never have.

The eccentric neighbors said that during the construction of the castle, they never saw Edward at work, but at night they heard his singing to the stones. Today, anyone can visit the Coral Castle, which has become a symbol of pain and irresistible bitterness of unrequited love.

Initially, the estate Coral Castle was built as a simple country house, where the family could live with comfort and all the amenities. For the castle, Edward began using coral limestone - an ancient megalith located near the construction site. 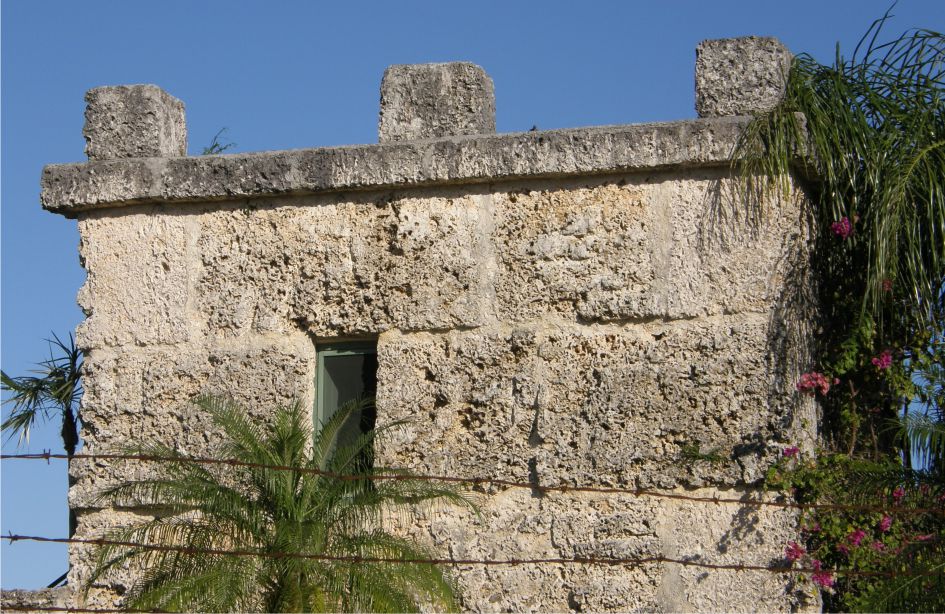 The terrain occupies about 40 hectares, and all of it is protected by a fence, carved out of similar material. Each block in the fence weighs several tons, and they just stand, buried in the ground without the slightest bond.

The entrance to the Coral Castle is made of a nine-ton door, carved out of stone. The design is based on a rotation of 360 degrees. And anyone, even a child, can easily open it by slightly pushing it. It is clear that through this block passes a round hole, through which it is installed.

It is a striking fact that in the XX century it was almost impossible to make such a hole in the lump. Even now, high-precision lasers are responsible for this. How the Coral Castle received such a composition remains unclear.

Currently, Coral Castle is equipped with all the necessary decorations for a comfortable life. In the courtyard are statues showing us the system of the galaxy. Nearby lies the Islamic Crescent and 25 gigantic armchairs, the idea of ​​which has not yet been solved by scientists.

A wonderful building occupying two floors is located behind the castle fence. It has a sundial, which can be watched by all visitors to Coral Castle. This watch is integrated into a huge table made of stone, resembling an echo of an ancient round knight table. Calibration hours may have taken an enormous amount of time. The owner of the palace probably invited the best masters, because even now, up to minutes you can use it to calculate the time anywhere in the world. 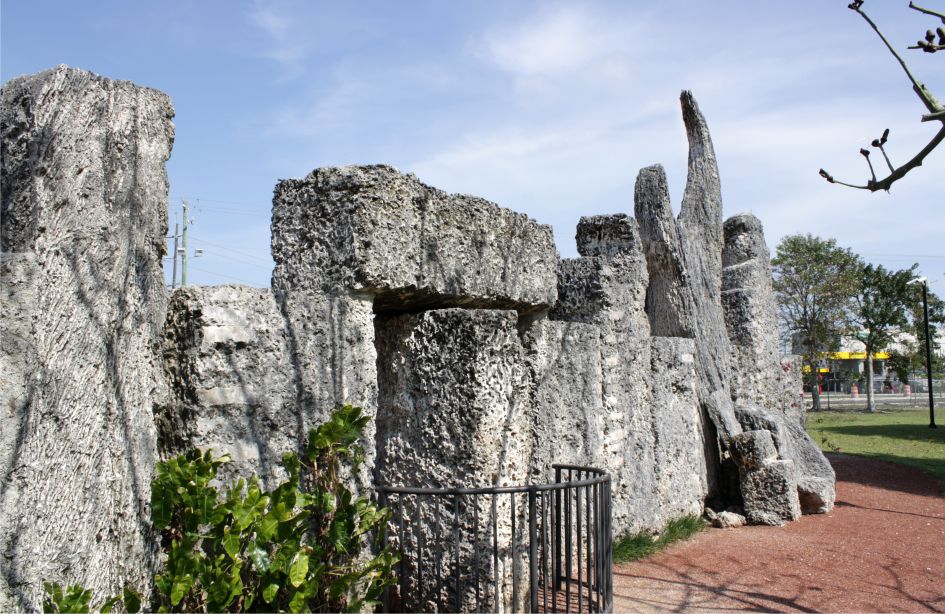 On the territory of the Coral Castle there is a stone Valentine - one of the largest and heaviest in the world. It is made in the form of a table-heart. The total weight of this exhibit is at least 2.2 tons. In the center of the product a small heart is carved in which the rosebush blooms.

In the realm of Coral Castle, you can find an incredible map of the entire Florida, relevant to the beginning of XX century. Next to it is a month, whose weight reaches 30 tons, its horn points to the Polar Star. Nearby you can find an underground swimming pool with water that accumulates here due to rains. Coral bath will surprise all lovers of unusual things, and the fountain will amuse adults and children, charge inspiration and exceptional memories of a holiday in Miami.

Coral Castle - is the embodiment of all the comfort that was valuable in the XX century. The tower, located in Coral Castle, is the only property with a roof.

On the ground floor there is a workshop in which the creator worked day and night. He lived on the second floor. There during the life of the creator did not let anyone. Interesting windows, embedded in the design of the castle, were created so that it was impossible to see what they were doing indoors. At the top is a telescope. Not far from the high-rise building there is a well and a bath, as well as an obelisk with historical dates associated with Edward Lindskalnin. 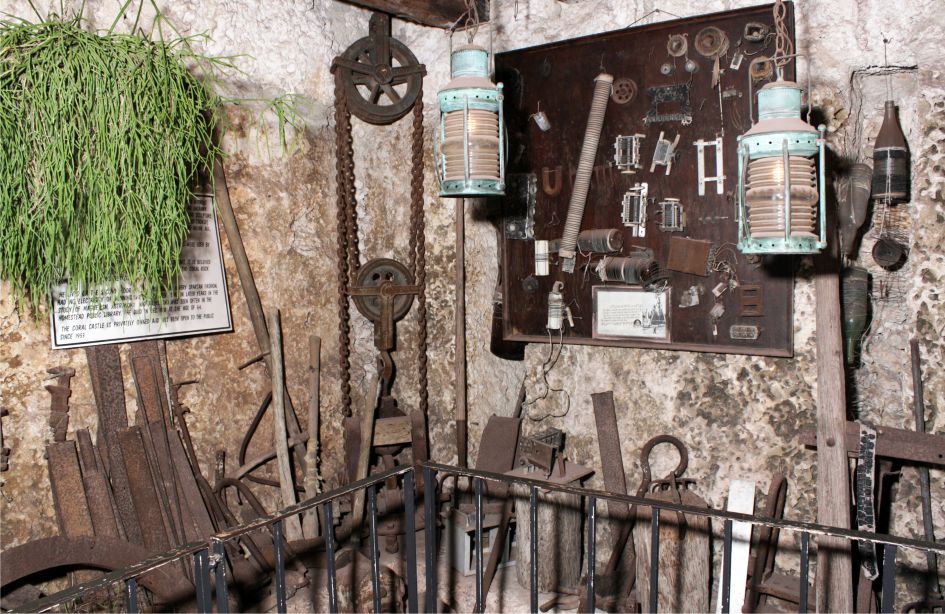 Construction of the castle went more than 20 years, and the man created all the exhibits himself. He created his tools from old cars and other metal elements. He was engaged in construction only at night.

It is believed that all secrets of Ancient Egypt were revealed to the owner. Otherwise, to explain the construction of all these giants alone is impossible.

That is why the Coral Castle so strongly and often attracts architects, researchers, scientists.

Another mystery - how could he work with limestone for so long that it hurt his hands badly, how could such a perfectly flat surface be achieved? And was Edward's tuberculosis a retribution for such incredible abilities?

Even the bulldozer could not move the 30-ton slab of the Coral Castle, and as with such specimens worked alone, incomprehensible to the mind. It is known for certain that no cars were used.

The main mystery for many architects, who put forward new hypotheses as a miniature person, whose height did not exceed 152 cm, and weight of 45 kg, was able to construct and build a house from huge multi-ton coral blocks without equipment.

American Butler is happy to organize an excursion to this mysterious place for you!

Book the most interesting excursions only in American Butler!
Оставить заявку
See also
Japanese Gardens and Morikami Museum
Walks in the park Morikami Museum and Japanese Gardens will require at least one and a half to two hours to walk around the entire territory. Of course, Morikami Garden in Florida differs significantly… Read more
Miccosukee Indian Village
Location Indian Village in Miami is indicated on the maps as "Miccosukee Indian Village & Airboat Rides". If you move to the west, the settlement is located 30 km away from Miami-Dade. The… Read more
Salvador Dali Museum
Excursion to the Salvador Dali Museum in Florida Florida's Dali Museum is located in the city under the modest name of St. Petersburg. Spouses Morse spent a few decades of life on the collection of… Read more
Jacksonville City Tour
Jacksonville history Jacksonville is the largest city in Florida. Founded in 1791 as Cowford, it developed rapidly through trade through sea and river routes. In 1821, Spain transfers Florida to the USA,… Read more
10 traffic rules in the USA
You came to the US and wanted to rent a car, but you doubt the knowledge of the rules of the road in another country? It's okay, there is a way out. Read tips from American Butler! Читать еще
Dental treatment in the USA
Читать еще
American writers
Читать еще
Fast food in the USA
What do you know about fast food? Probably that they do not need to get involved. And rightly so, but in fact the question is much more interesting. Argue that we will break at least 3 stereotypes right… Читать еще
Coral Castle 5 1 0 0
Sharing: