The Nottouea Plantation is a Greek and Italian style mansion built by John Randolph in 1859. It is the largest surviving plantation house in the southern United States with an area of 4900 m². 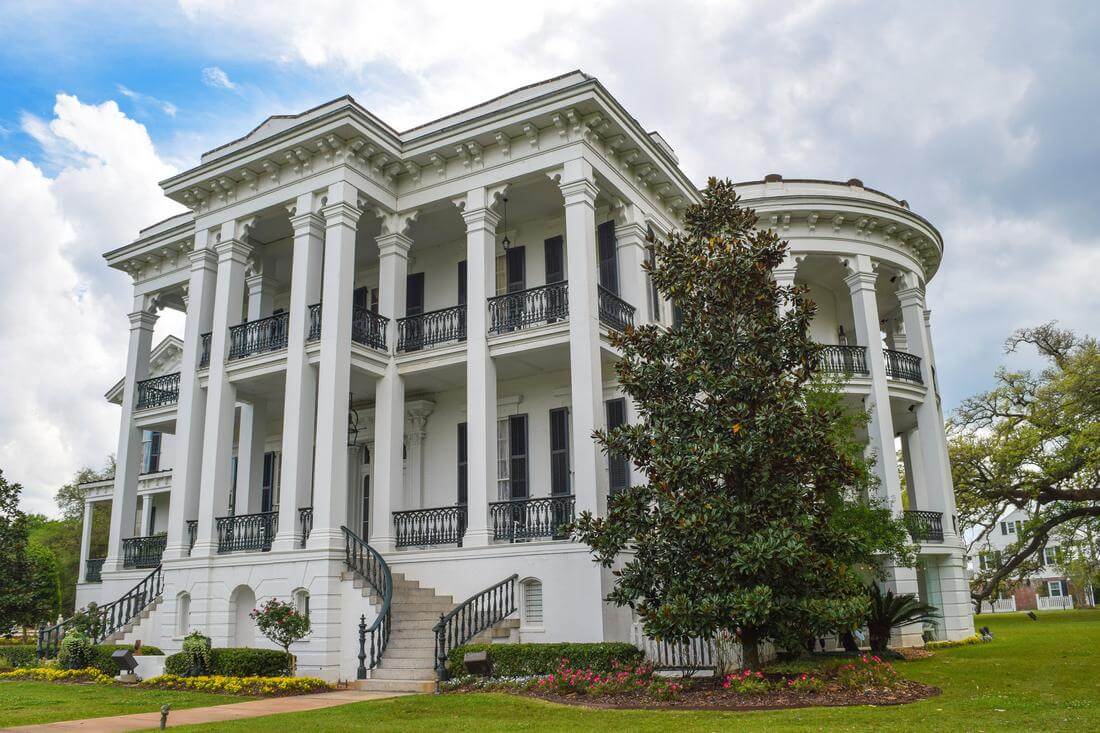 John Randolph was born in Virginia in 1813. At 7, he moved with his family to Mississippi when his father, Peter Randolph, Jr, was appointed federal judge. Randolph dedicated most of the strength of the cotton plantation. Believing that sugar production would be more profitable, he bought 6.7 km² of plantation and planted sugar cane there.

Within ten years, he increased his holdings to 28 km² and bought 176 slaves, making Randolph one of the largest slave owners in the south. In 1855, he acquired an additional 1.6 km² of highlands and 2.5 km² of swamps and the Mississippi River, where he sought to build a more prestigious house - the same Nottoway, named after the eponymous Virginia district.

Randolph equipped Henry Howard, who is considered one of the best architects of the 19th century in New Orleans. Many of the buildings, churches and houses he designed can still be found in the city.

Cypress logs for the house were cut and dried for six years and then cut into boards. The most remarkable feature of wood is not strength, but resistance to termites. The bricks were made slaves, and 40 carpenters, bricklayers and plumbers were hired by Howard himself, who lived in a tent at the construction site.

Construction of the house was completed in 1859, along with many other buildings: a school, a greenhouse, stables, barns and houses for slaves. 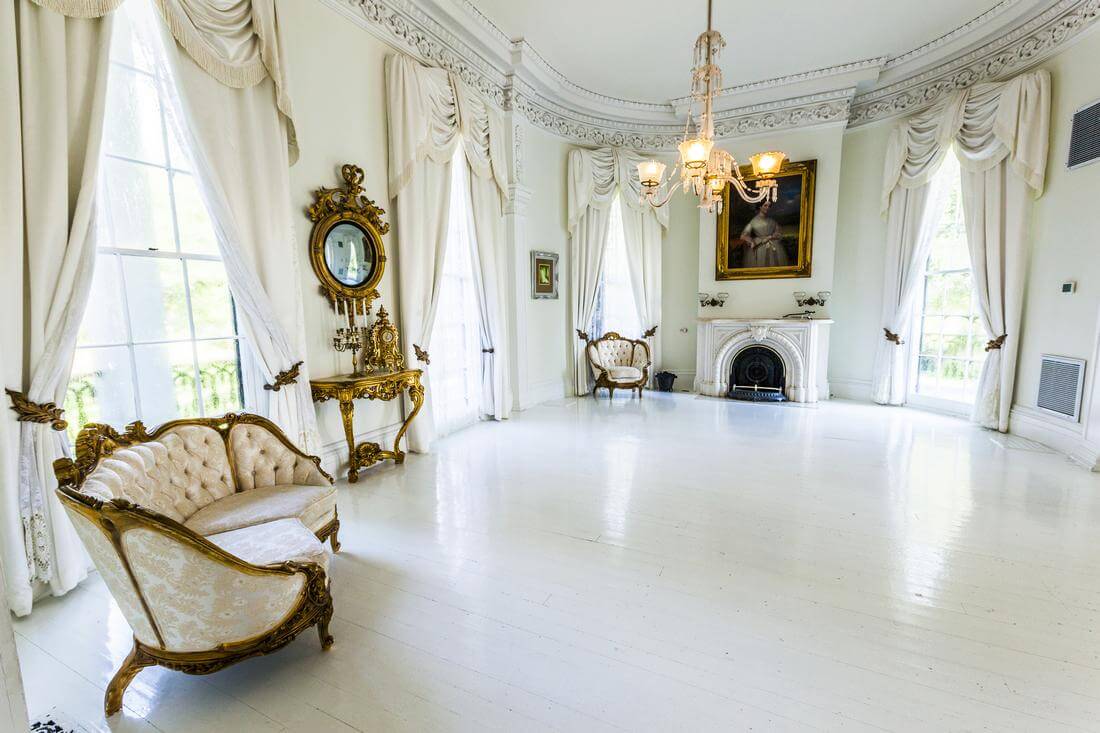 How it all ended

Soon the civil war began. Randolph supported the military financially and sent his sons to fight for the Confederation. The war was getting closer to the plantation, the owner and his family fled to Texas. In the end, it was occupied by the Northerners, who looted property, and only the vineyard remained intact. After the abolition of slavery, John realized that the sugar business was not so profitable after the war, and by 1875 the plantation was reduced to 3 km². John Randolph died in 1883, leaving the plantation to his wife, who after 6 years sold it.

New owners tried to manage the estate as a sugar plantation, but to no avail. They sold most of the land, keeping the house and surrounding property.

Much later, businessman and philanthropist Paul Ramsay turned the plantation into an inn. The house was added to the National Register of Historic Places in 1980 and became a popular tourist attraction in Louisiana. 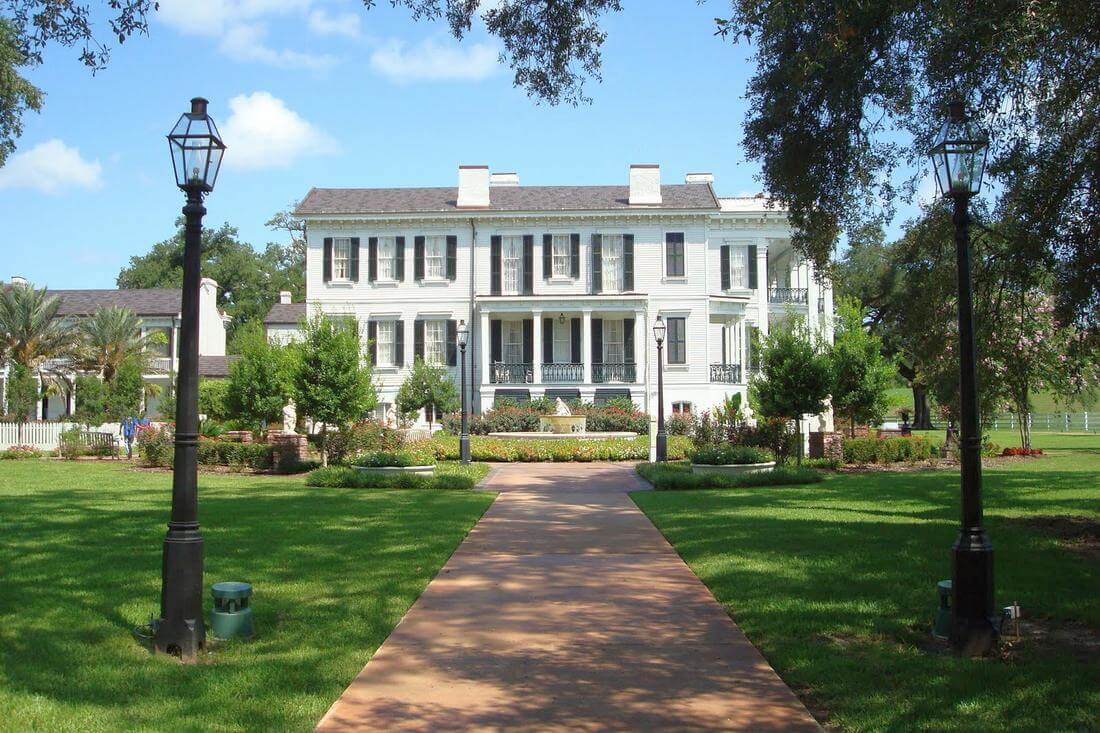 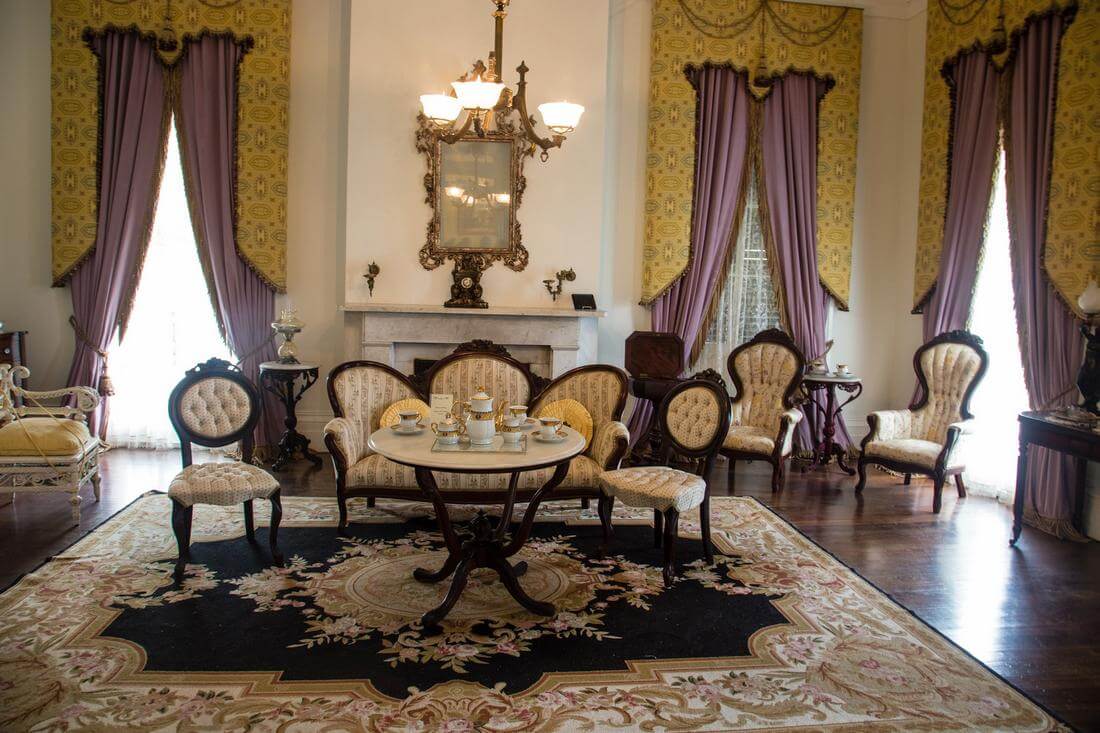 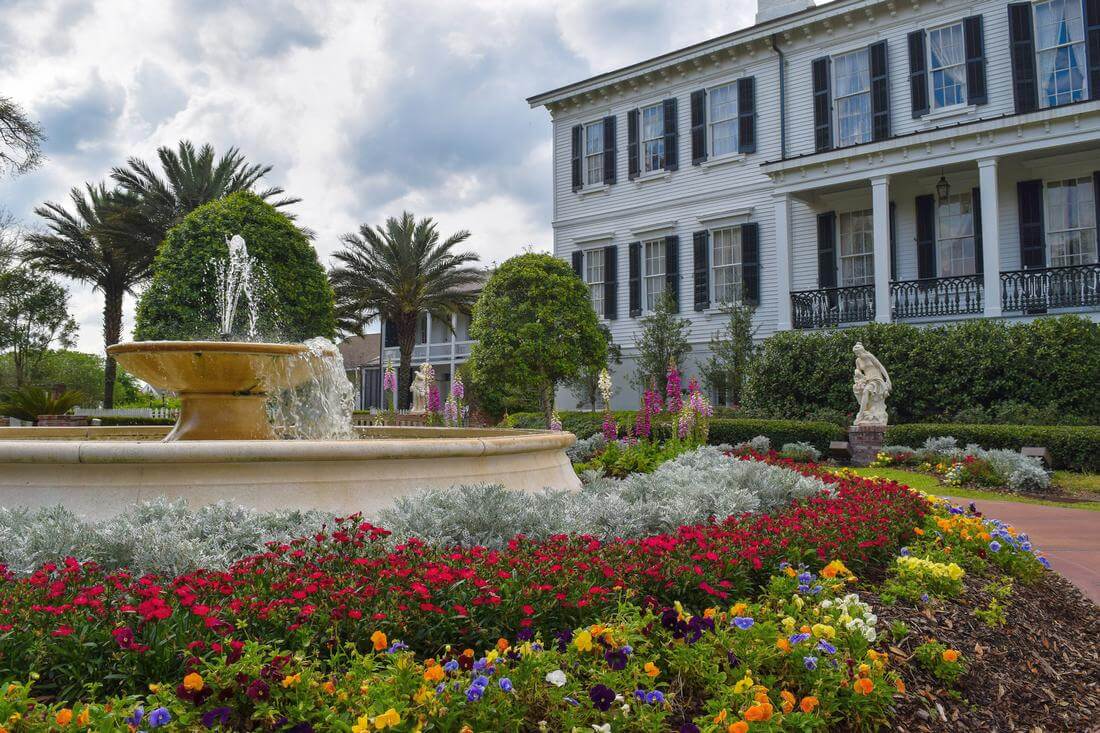 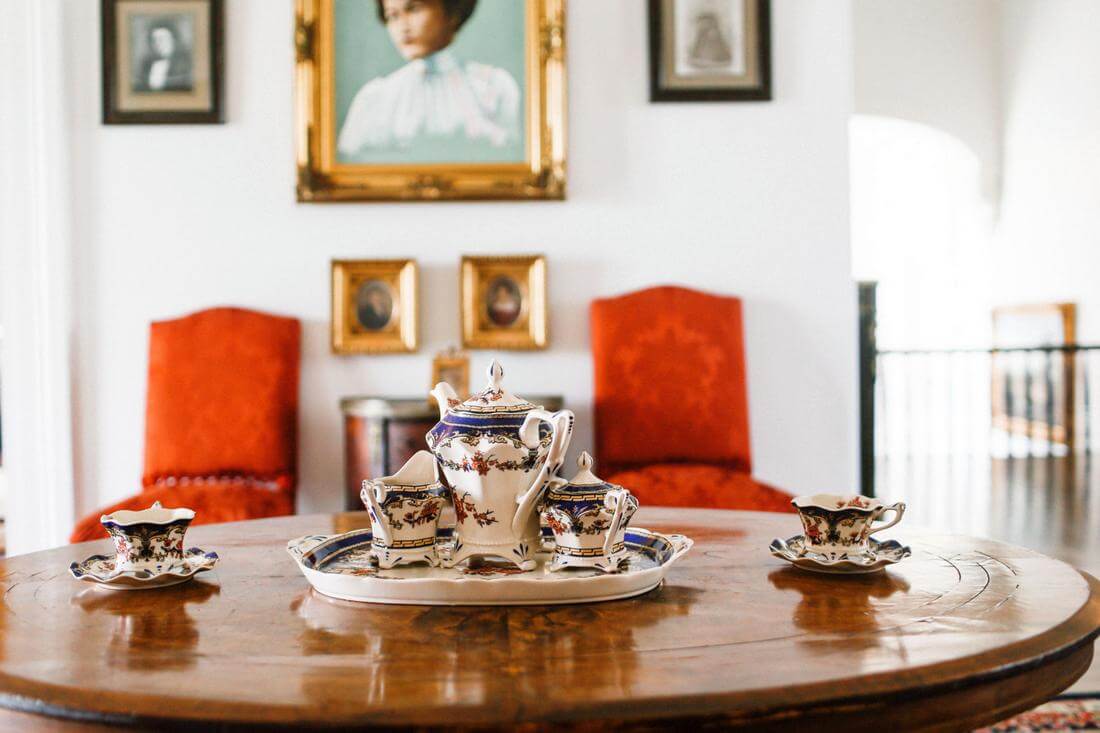 Description of the sights

The main wish of the owner during the construction of the house is that everything is done conscientiously and no one would save on materials. As a result, a three-story wooden frame house came out, including a one-story brick base with stucco on a concrete foundation.

The main five-beam structure with a protruding portico emphasizes the height of the house. The galleries are decorated with custom-made ornamental iron railings covered with wooden handrails. Ladders were built on the left (for ladies) and on the right (for gentlemen). Separate staircases were such that men did not see women's ankles under their skirts when they were rising. 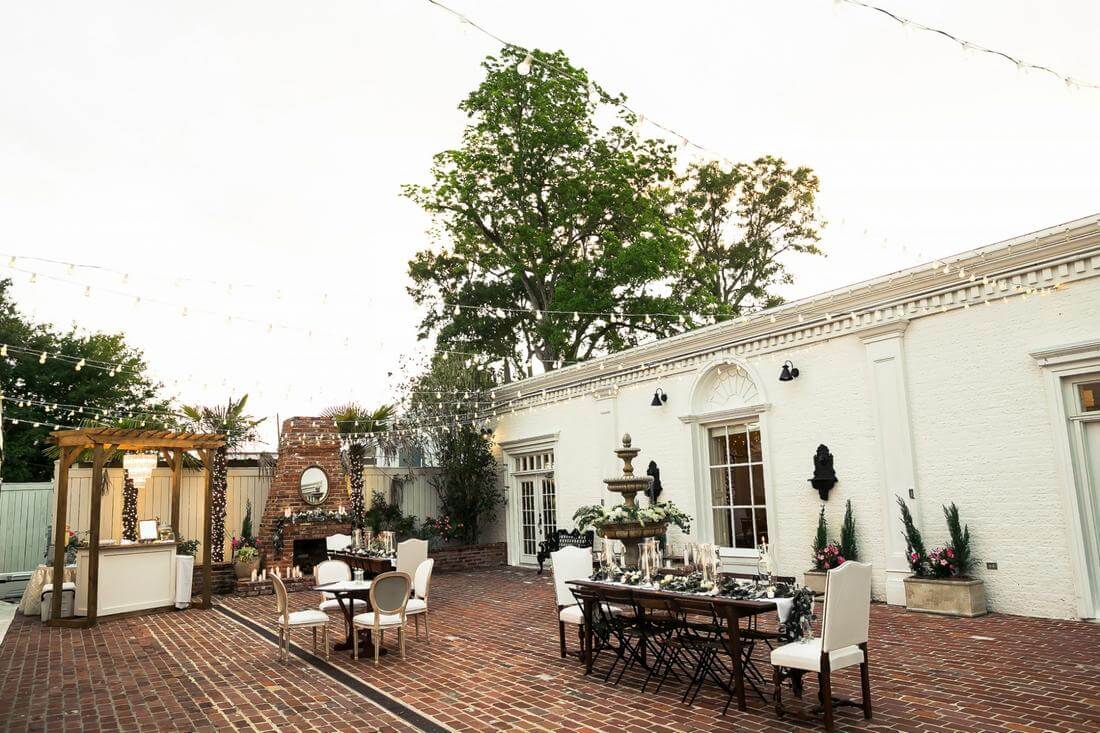 The mansion has 64 rooms with 165 doors and 200 windows. The house enjoyed the novelties of the 19th century: a bathroom, flush toilets, hot and cold water supply, gas lighting throughout the house and a sophisticated system to call servants.

The basement of the first floor was transformed into a restaurant and a small museum about the Randolph family and the history of the plantation. Initially, the space occupied by the laundry, dairy, wine cellar and premises for servants.

Today the house is located behind the river dam, and the territory includes a small garden and a fountain in the courtyard in front of the southern wing of the bedroom. Around the house are modern ancillary buildings and offices.

The owners expanded the property in 2008 by building a barn, a banquet hall and nine cottages modeled on the original slave houses. To the north of the house are reconstructed stables, now converted to a ballroom, and a small cemetery, where in 2003 family members were reburied.

Visit the Nottingay Plantation with a guided tour, and American Butler, a travel agency in the USA, will help you with this.
Send a request
Also read
Cypress Lake
Cypress Lake is the heart of the Lafayette University of Louisiana campus. Today it is a unique landmark of the university, which is a habitat for local irises, alligators, turtles, birds and fish, as… Read more
Madewood Plantation
Maidwood Plantation - the former possession of a sugar cane producer near Napoleonville, Louisiana. This is a national historical monument, one of the best plantations in the style of the Greek Renaissance… Read more
Rosedown Plantation
The Rosedown Plantation, which covers 374 acres in St. Franceville, is an untouched example of a plantation complex in Louisiana. This is a place to study the cultural traditions of slavery, the lifestyle… Read more
Lake Pontchartrain
Lake Pontchartrain is located in Southeast Louisiana. It has a length of 64 km and a width of 40 km. New Orleans is located along its southern and eastern coast. The lake crosses Lake Pontchartrain Causeway… Read more
Miami Beaches
Читать еще
Dental treatment in the USA
Читать еще
Walt Disney
Disney cartoons are forever. Who did not cry under the "Lion King" and "The Little Mermaid", did not hang out in front of the "Cinderella" and did not try to speak like Donald Duck? But usually we see… Читать еще
French Restaurants in Miami
The French know no boundaries when it comes to expressing love. It can be seen not only in words, but also in cooking. While in Miami, take a look at one of the restaurants on this list: Palme d'Or at… Читать еще
Hoover Dam
Hoover Dam is one of the highest dams in the world, and at the same time a powerful hydroelectric power station. Tourists and residents come here to see the incredible scale of construction, go boating,… Читать еще
Craft Contemporary
Craft Contemporary is a building with more than half a century of history, a gallery of folk art. Since Los Angeles has become an important international art center, the Museum of Crafts and Folk Art… Читать еще
Nottoway Plantation 5 1 0 0
Sharing: