Bob Graham Sunshine Skyway Bridge — the bridge in Florida is named after Bob Graham. It is designed for cars and laid across Tampa Bay. The total length of the structure is approximately 6.5 kilometers, of which the main span stretched for 370 meters.

The bridge is a continuation of Route 19, connecting Terra Sayia and St. Petersburg, and runs over the waters of Hillsborough County. Its construction, on which $244 million was spent and lasted five years, 1982 to 1987. The new structure replaced the previous one, which was destroyed in the early 80s of the last century as a result of a collision with a ship. Today it is the main bridge of the state of Florida.

Materials for building Sunshine Skyway Bridge — concrete and metal floors. His scheme was developed by Figg & Muller Engineering Group, and the construction was carried out by the American Bridge Company. The basic support force is steel cables in the form of nine-inch pipes located along its main line. 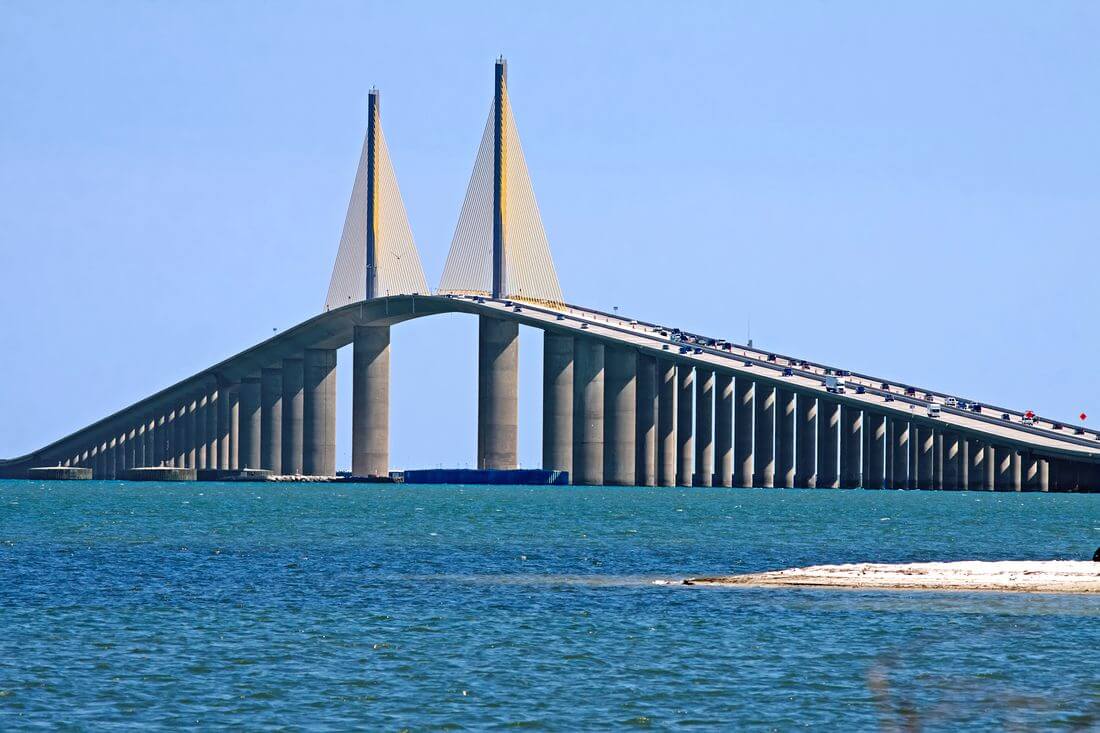 The first cantilevered two-lane bridge at this site appeared in the midst of the 1950s. In 1969, a similar structure was erected parallel to it in the western part to provide four-lane traffic. However, even then its full functioning was delayed due to the need to strengthen the foundation. After the opening, automobile traffic along these two structures became one-way. In the old one it was possible to move north, while the new one took the stream of cars to the south.

The last Sunshine Skyway line in Florida collapsed in 1980 when a bulk carrier collided with one of the bridge piers with poor visibility. As a result, the main span of 366 meters crashed into the water bay along with a cargo truck, 6 cars, passenger cars and a bus. The tragedy claimed the lives of 35 people. The only survivor whose pickup was on the deck of the ship received compensation in the amount of $ 175,000 in the future. The captain of the ill-fated bulk carrier was subsequently fully acquitted.

The collision led to the temporary use of the north bridge in both directions. The only survivor was the last to drive through Sunshine Skyway before dismantling. From the highest point of the bridge, 35 white carnations were dropped onto the water surface in memory of the victims, including the wife of the surviving man.

In 2005, the Sunshine Skyway Bridge was named after Bob Graham, the head of state at whom it was built. It is believed that it was he who proposed the construction of a structure resembling the French Broughton Bridge. 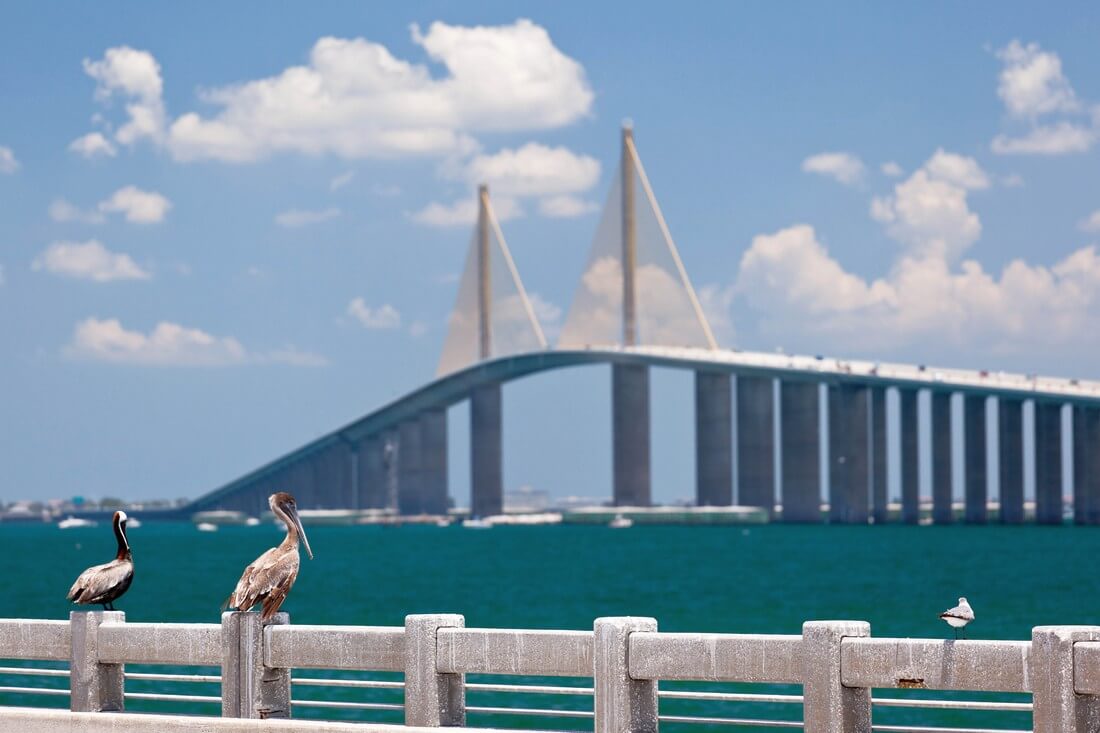 Dismantling the old and features of the new bridge

Demolition of the bridge was provided by the Hardaway Company. Several tasks were set for it: to dismantle all surface and underwater structures, transport all material to the banks to form artificial reefs, and also remove the main span without disassembling it, so as not to interfere with the free movement of ships.

As a result, the company correctly calculated the disassembly sequence and the plan for the safe destruction of all structures in the open area of the bay.

Two cranes and barges removed and removed the entire main span. Despite the bad weather, the entire project was completed within two and a half hours.

The new structure was distinguished from the old one by a span half as long as the previous one, as well as by the presence on the main and auxiliary supports of special islands protecting them, withstanding the possible impact of a large vessel.

The infamous base jump rope is also connected to the Sunshay Skyway Bridge in late April 97. The result of this trick was to be the swing of five team members over the water by the pendulum. However, the jump ended in failure.

Most likely, the reason for this was an inaccurate calculation of the load on the cable fastening. As a result, it could not stand it and after passing the lower point of the jump, the group collapsed into the water from almost twenty meters high. Members of the group received numerous injuries, and two of them suffered spinal injuries.

Also, the bridge is a favorite place for suicides. And recognized in the rating 4 as a bridge for those who like to end their lives in the United States.

Want an interesting tour of Florida?

Order it at American Butler!
Send a request
Also read
Miccosukee Indian Village
In translation Read more
Mission San Luis
The first stronghold of the Spanish colonists in the territories of the Appalachians was Mission San Luis. Today, this historical monument can be seen near Tallahassee - Florida. The formation of the… Read more
Bok Tower Gardens
In the central part of Florida is the small town of Lake Wales, known for its incredible beauty park. The park pleases the eye with gardens, a variety of fruit and flower plants. At the very heart of… Read more
Seven Mile Bridge
The seven-mile bridge connects the mainland with the island of Florida Keys — the famous Seven Mile Bridge leads to a real tourist paradise. This is a double landmark with an interesting, albeit… Read more
Decorated Christmas Cities
Читать еще
Mobile network operators in the USA
The good news for those who confuse "ringing" and "ringing" - Americans do not care. But how to make a call or message in the United States and not give the last shirt for it, the information will be… Читать еще
Why everyone loves Steve Jobs
Читать еще
American cuisine
Who said that apart from fast food in America, there is nothing to eat? All this is bullshit, American cuisine - the most diverse, nutritious and interesting in the world! One name for the tex-mex direction… Читать еще
Smoking in the USA
Smoking is the bad habit that infected the whole world from America. But modern Americans themselves are not particularly loyal to smoking. How it happened, let's try to figure it out. Читать еще
Atchafalaya Basin
The Atchafalaya Basin is the largest river swamp in the country, containing almost a million acres of bottom hardwood, marshes, flood and swampy lakes of America. The pool begins just outside Simmesport… Читать еще
Mount Charleston
The view of the snow-capped mountains seems a bit surreal when Las Vegas still feels the warmth of the desert sun. At 11,916 feet above sea level, Charleston Peak is covered in snow for more than six… Читать еще
Comic-Con International
Comic-Con is an exhibition that educates people about pop culture. The bet is on comics and related art forms. Organizers support public presentations and exhibitions on the historical contribution of… Читать еще
Sunshine Skyway Bridge 5 1 0 0
Sharing: