In the central part of Florida is the small town of Lake Wales, known for its incredible beauty park. The park pleases the eye with gardens, a variety of fruit and flower plants. At the very heart of the park is a beautiful bell tower, built in the colonial style.

History of Bok Gardens and Towers

Bok Tower Gardens got its name in honor of the publisher and writer Edward Bok. In 1869, Bok and his parents arrived in the United States from Holland to settle here forever. Bok was destined to become the pride of literary America.

For one of his books, Mr. Bok won the main literary prize in the United States — Pulitzer. Bok published a women's magazine, which became the first periodical in the world with a circulation of over 1 million copies.

In addition to publishing, Bok was engaged in charity work, he created several funds and enterprises. At the beginning of the 20th century, the publisher decided to create a unique park in Florida.

Unusual and mysterious: what to see Bok Tower Gardens 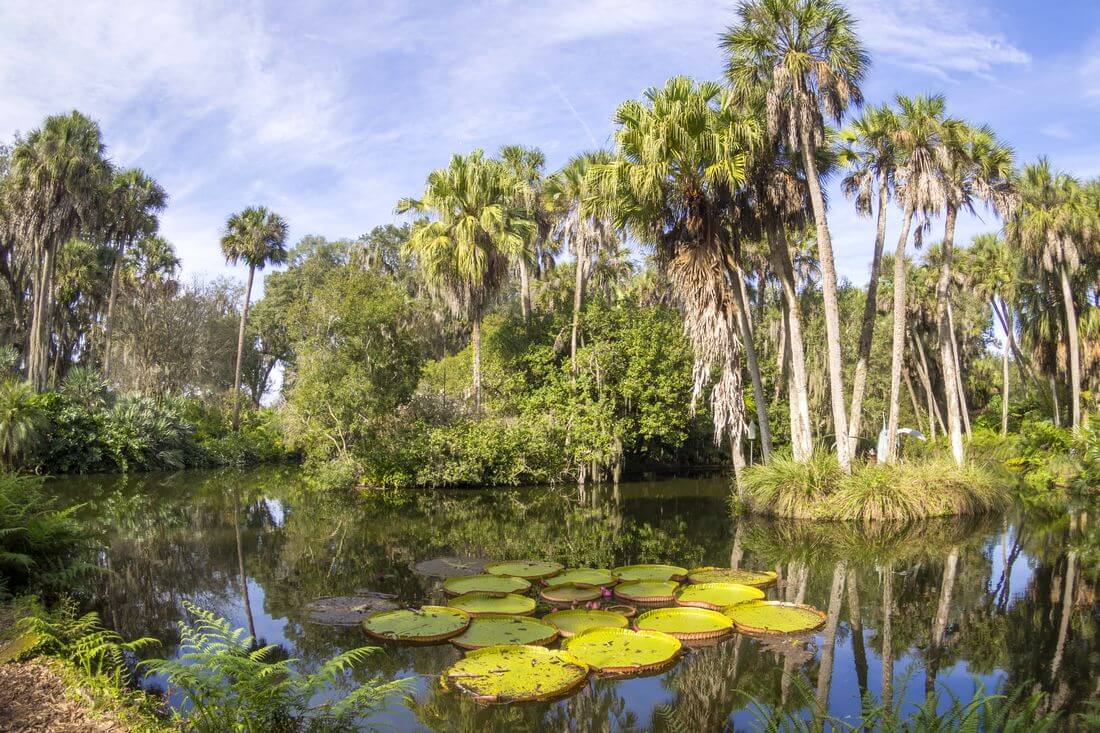 The Bok Historical Reserve over time has become one of the main cultural attractions of the United States. The park began with the creation of an irrigation system, planting shrubs and flowers that attract birds.

In the center of the park, Bok ordered the construction of a Dutch tower with 60 bells: he paid tribute to his distant Motherland.

Over time, the trees planted on the hill turned into beautiful gardens. Bock said that he is giving the park to America for the opportunities that this country has given him. In 1929, President C. Coolidge signed a decree on the transfer of Boka Park to the American people.

The park and Bok Gardens are breathtaking. Narrow paths laid in thickets lead from one garden to another. There is no limit to the visitor’s curiosity, he is walking faster along the path, trying to see what is around the bend.

There is a sundial in the stunning butterfly garden. If you stand in a specially marked place - you can see how the visitor’s shadow accurately indicates the time of day. In a citrus garden, oranges are twisted from the branches, the heady aroma of grapefruit spills in the air.

The mysterious park and Edward Bok Tower are also the habitat of tame swans. Birds swim in the pond surrounding the bell tower. Swans with pleasure take bread from the hands of visitors, and if they are greedy, they can peck guest shoes.

To see the Bok Gardens, leave a request for an excursion to the American Butler!

You will like it there!
Send a request
Also read
Miccosukee Indian Village
In translation Read more
Morikami Museum
In translation Read more
Seven Mile Bridge
The seven-mile bridge connects the mainland with the island of Florida Keys — the famous Seven Mile Bridge leads to a real tourist paradise. This is a double landmark with an interesting, albeit… Read more
Sunshine Skyway Bridge
Bob Graham Sunshine Skyway Bridge — the bridge in Florida is named after Bob Graham. It is designed for cars and laid across Tampa Bay. The total length of the structure is approximately… Read more
Where to ski in the USA?
Читать еще
Buy car in the USA
Читать еще
Al Capone Story
The world is full of atrocities at all times, but the 20s years of the 20th century became the most cruel and riotous for America. But the times of Prohibition and the Great Depression turned out to be… Читать еще
Italian restaurants in Miami
Florida's best trattorias elevate the spiritual simplicity of the kitchen to unattainable heights and help visitors to appreciate the authentic flavors of the country's characteristic culinary regions.… Читать еще
Smoking in the USA
Smoking is the bad habit that infected the whole world from America. But modern Americans themselves are not particularly loyal to smoking. How it happened, let's try to figure it out. Читать еще
Atchafalaya Basin
The Atchafalaya Basin is the largest river swamp in the country, containing almost a million acres of bottom hardwood, marshes, flood and swampy lakes of America. The pool begins just outside Simmesport… Читать еще
Mount Charleston
The view of the snow-capped mountains seems a bit surreal when Las Vegas still feels the warmth of the desert sun. At 11,916 feet above sea level, Charleston Peak is covered in snow for more than six… Читать еще
Comic-Con International
Comic-Con is an exhibition that educates people about pop culture. The bet is on comics and related art forms. Organizers support public presentations and exhibitions on the historical contribution of… Читать еще
Bok Tower Gardens 5 1 0 0
Sharing: