The Washington Monument is puzzling to many - it looks much more modest than it sounds.

History of the Washington Monument: Expectations and Reality

How the Washington Monument should look like is still argued. And what is available now does not quite correspond to the original plan. 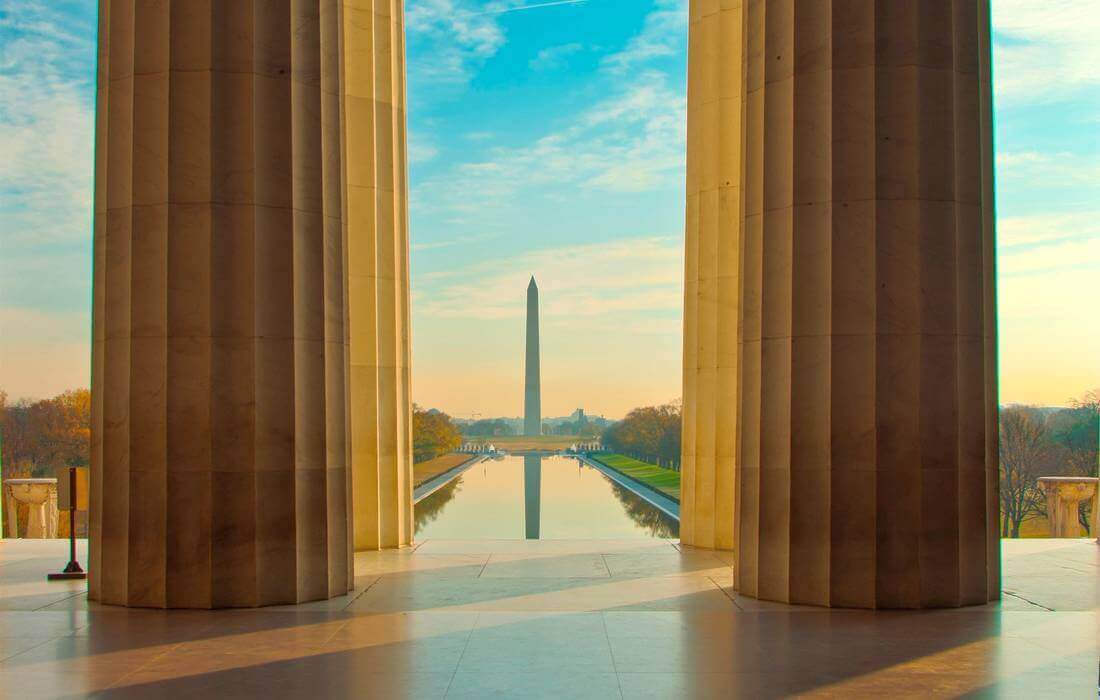 In 1832, it was 100 years since the birth of George Washington. On this occasion, particularly conscious citizens (and there were even more such then than now) began, as they would say now, a crowdfunding campaign. Across the country and even beyond its borders, began collecting funds for the construction of the monument to the great politician. For three years, accumulated, in terms of today's course, about $800 thousand.

In 1836, a competition was held for the construction project. It was won by Robert Mills - he proposed to erect the highest obelisk in the world, surrounding him with a rotunda with columns. Under the obelisk was supposed to place a statue of Washington and another 30 heroes of the War of Independence of the United States.

The project was beautiful and everyone liked everything about it. Except the price. At that time, the cost of materials and work was, again in recalculation, about $22 million.

The initiative society decided to cut off all the "extra" and start building the most prominent part of the monument - the obelisk. It was believed that during the construction process, the Americans would see the process, be inspired and begin to donate more money, for which everything else is realized. The construction went from 1844 to 1885. During this time, several Christian communities and even the Pope of Rome donated plates to the obelisk. But the matter did not move further. 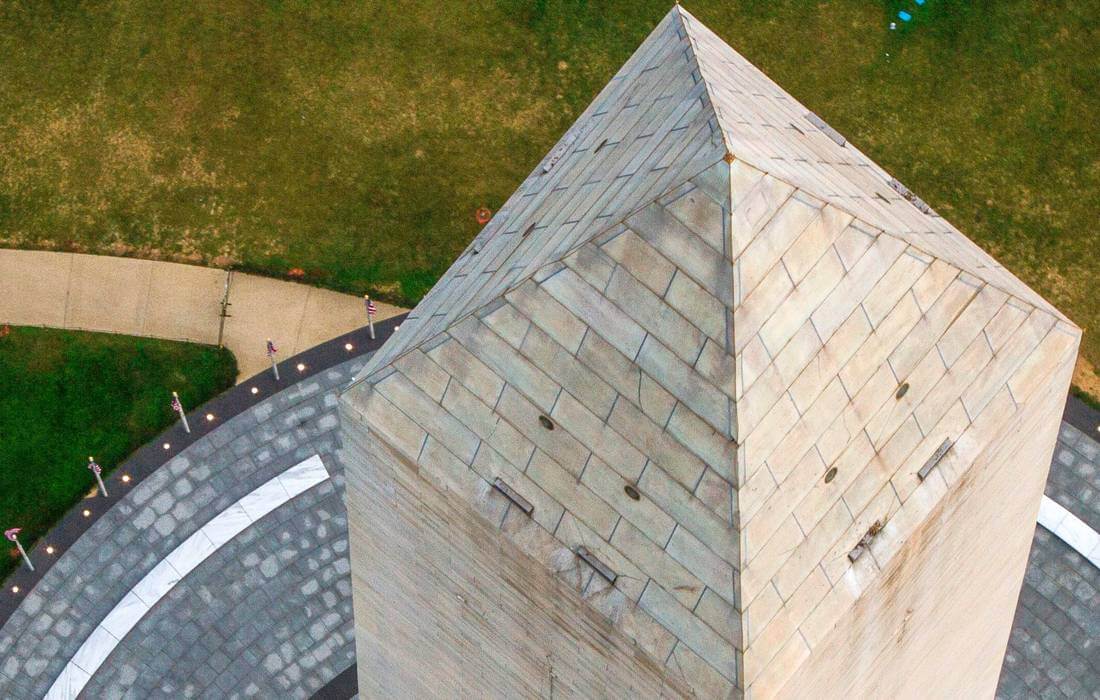 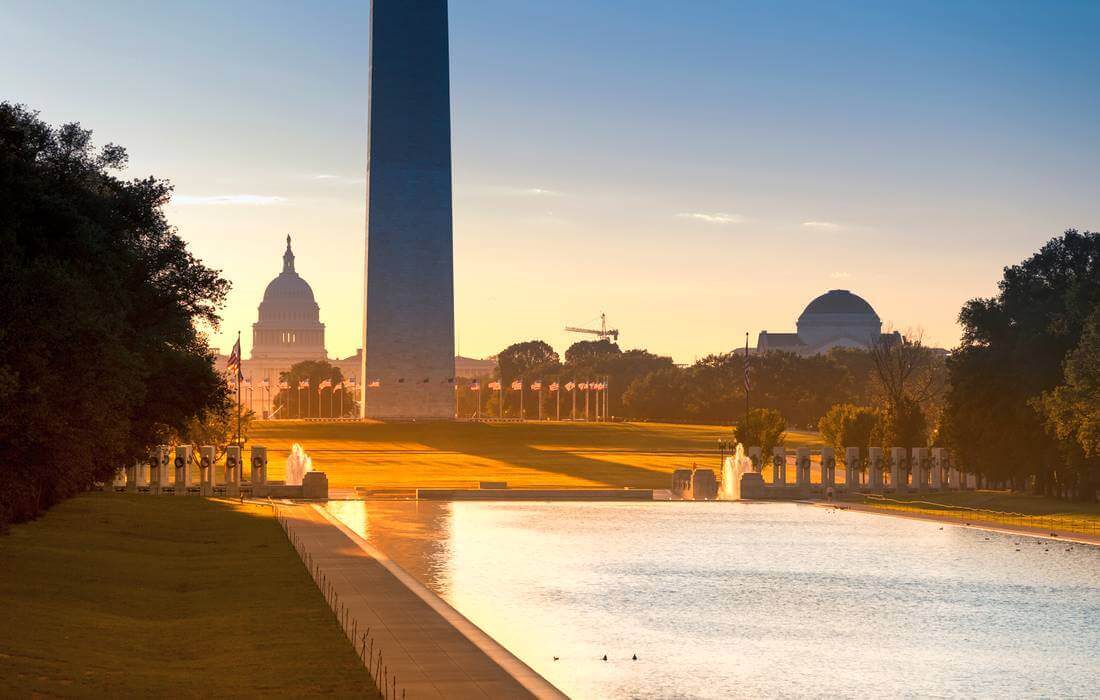 Washington Monument is located directly opposite the White House, on the site of the National Mall. Until now, it is only an obelisk with a height of 169 meters with a four-sided pyramid on top. The monument is hollow, inside there are only stairs and elevators to climb the upper tier. There is an observation deck overlooking the four directions of the world. 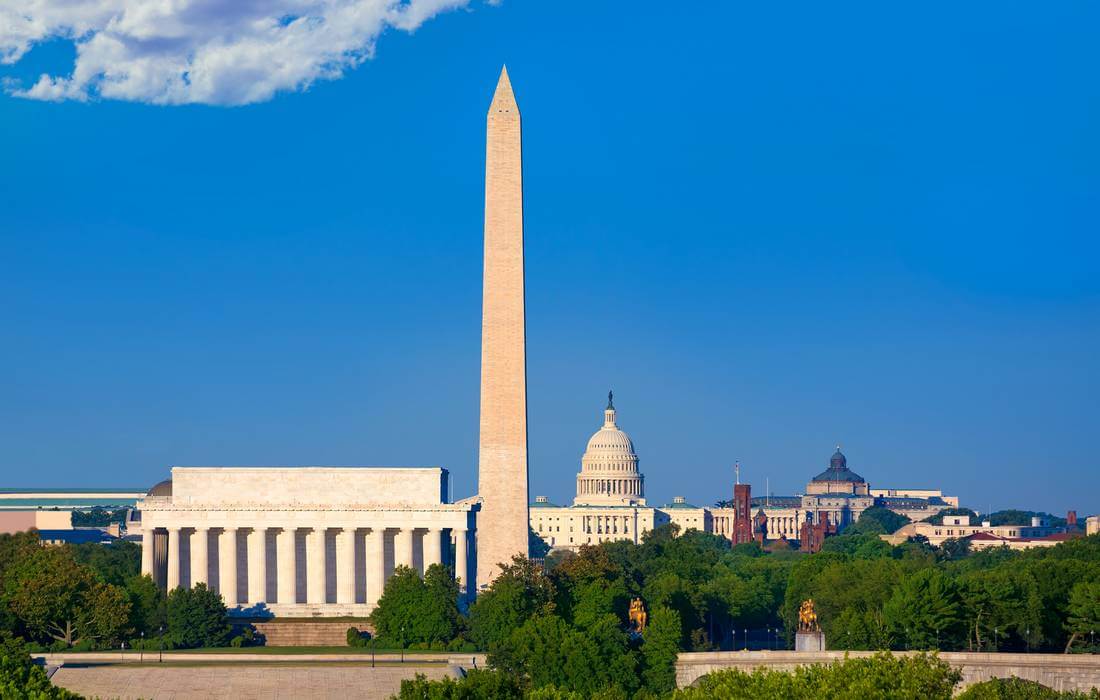 Even with time, the composition could not be rebuilt, not only because of the budgets, but also the design features of the obelisk. Regular polls show that citizens consider it “poor” for the symbol of the capital of the United States, some are even ready to chuck in such a thing. More than half of the respondents would like to see a colonnade originally planned nearby. But the action plan did not outgrow it.

Plus to all, after the earthquake of 2011, a crack has gone across the obelisk. If the extension of something before was accompanied by the risk of collapse, today it is increasing. It is better standing exactly "pale" monument, than the symbol of power of America collapsing on cameras of onlookers. But there is a benefit from this.

To make the obelisk look more elegant, a Mirror Pond was built nearby - many may recall it in a scene from the Forrest Gump film. The pond is designed in such a way that the water in it does not ripple and does not freak out, even on a windy day. And since the stele of the monument is reflected in the water at full height, this creates an additional effect of stability and reliability of both the monument and the convictions of Washington and the country itself.

American Butler specialists know a lot more about iconic places and buildings in the USA. You can read about them on our website, and if you want to see it live, we will be happy to help you not to miss any interesting sights.

Fill out an application with your question, an order for a tour or other services in the form below. Our experts will contact you and give the most comprehensive answers.
Send a request
Also read
Pentagon
Pentagon - even sounds ominous, right? In fact, everything is a little easier than we think. We invite you to learn the most important thing about the Pentagon - what it is all about and if everything… Read more
National Mall
The National Alley seems like a place for strung exponential patriotism. But it is not so. This place olitsitvayuet United States of America and reveals all the advantages and strength of the state. This… Read more
Alexandria
Alexandria is a bit of a suburb of Washington. And this is the most comfortable place that you just saw. This is a beautiful and quiet place for family walks and measured, unhurried American life. Read more
Lincoln Memorial
The Lincoln Memorial is one of the main attractions in Washington, which is located in the city center on the National Mall. The monument, which was seen by many - it is often played up in movies and… Read more
Boardwalks in the USA
Читать еще
How does recycling work in USA
10 years in prison for dumping trash? Easily, if you threw the packaging from under the laundry detergent in the tank for food waste. More recently, Americans did not want to dig in the trash, but now… Читать еще
Al Capone Story
The world is full of atrocities at all times, but the 20s years of the 20th century became the most cruel and riotous for America. But the times of Prohibition and the Great Depression turned out to be… Читать еще
Waterview restaurants in Miami
Do you want to enjoy lunch or dinner in one of the best restaurants in Miami, but a beautiful view of the sunset or the water is a very important criterion. Read our article about a dozen restaurants… Читать еще
Mission Trails
Mission Trails Park is San Diego's largest wildlife sanctuary and its pearl. There are about 600 different species of plants, including more than 300 varieties of wildflowers. Читать еще
Washington Monument 5 1 0 0
Sharing: