Statue of Liberty in NYC

It seems that there is nothing more American than the Statue of Liberty. But few people know that the beauty with a torch is the sister of the Eiffel Tower, she loves to flaunt even postage stamps, speaks with a French accent, and oh, she likes to be late for 10 years from the date of the appointment. 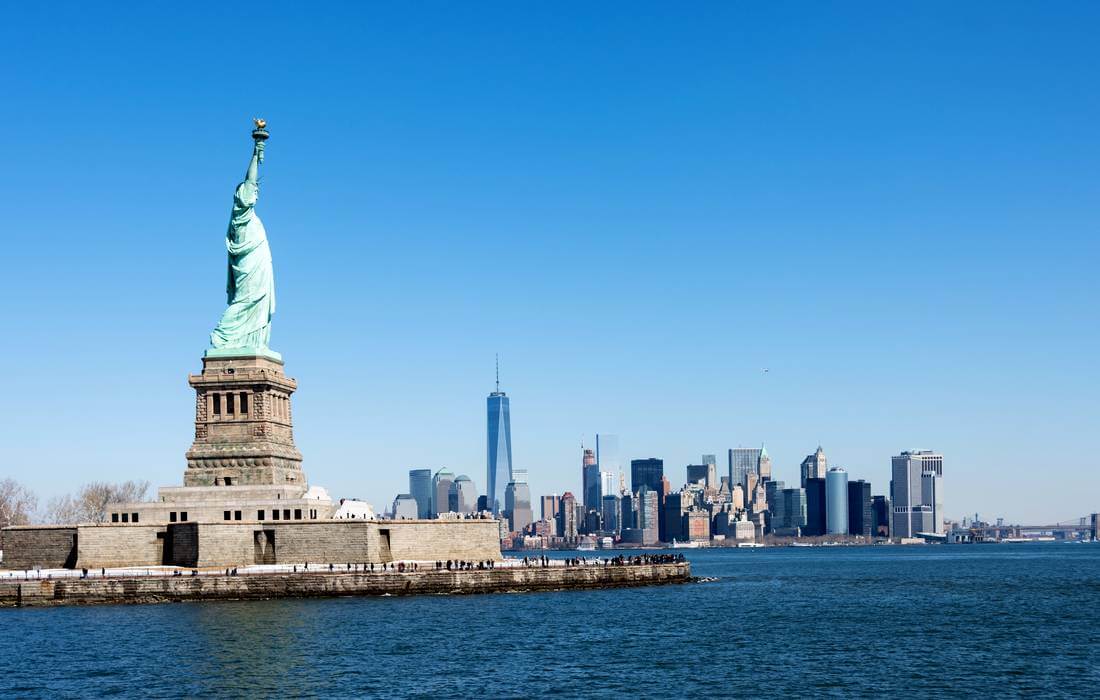 The idea to erect a statue as a sign of the greatness of America came up, oddly enough, to the French. And it was a pure spiritual impulse. There were always few French immigrants among Americans, but they liked the idea of a free state more than anyone. The most powerful rebels and revolutionaries of Europe decided to salute the states as expected - powerfully and beautifully.

The project of the statue was decided to be made to the World Exhibition in 1876 - as a gift for the United States for the centenary of the adoption of the Declaration of Independence. The architect was Gustave Eiffel, who made the symbol of Paris several years later. And who could offer the French as a character in an epic statue? Well, of course, a woman!

Beautiful, with a bold gaze into the distance, standing with touching bare feet on the torn shackles. In one hand - a torch carrying the light. In the other - the tablet with the date of declaration of independence stamped on it. On its head is a crown with seven rays , as an appeal to the seven seas and continents. Except for the base, it is of medium height - only 46 meters, and weighs 156 tons. Perfect proportions, almost model. Her equally gallant friend from Volgograd called Motherland-Mother weighs 51 times more.

The skin is copper, but the frame is made of real steel, for inflexible character. The fire burns with gold, and it stands on a solid concrete base. Truly, if such a woman was in the mood to be a winner, then she could not be moved from her path. 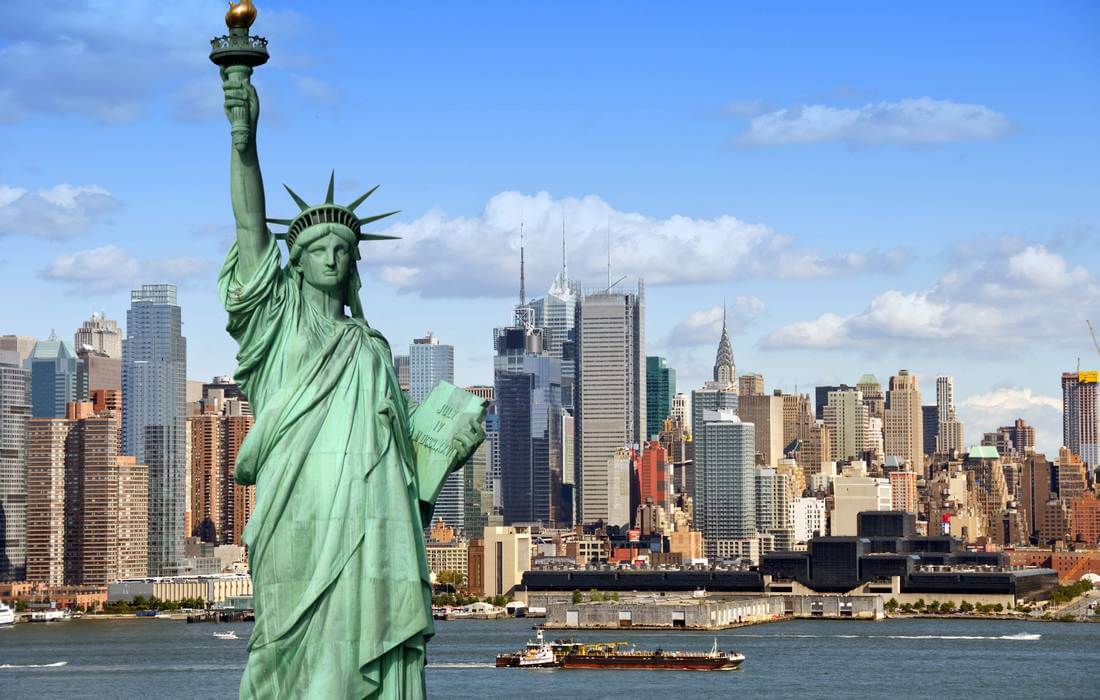 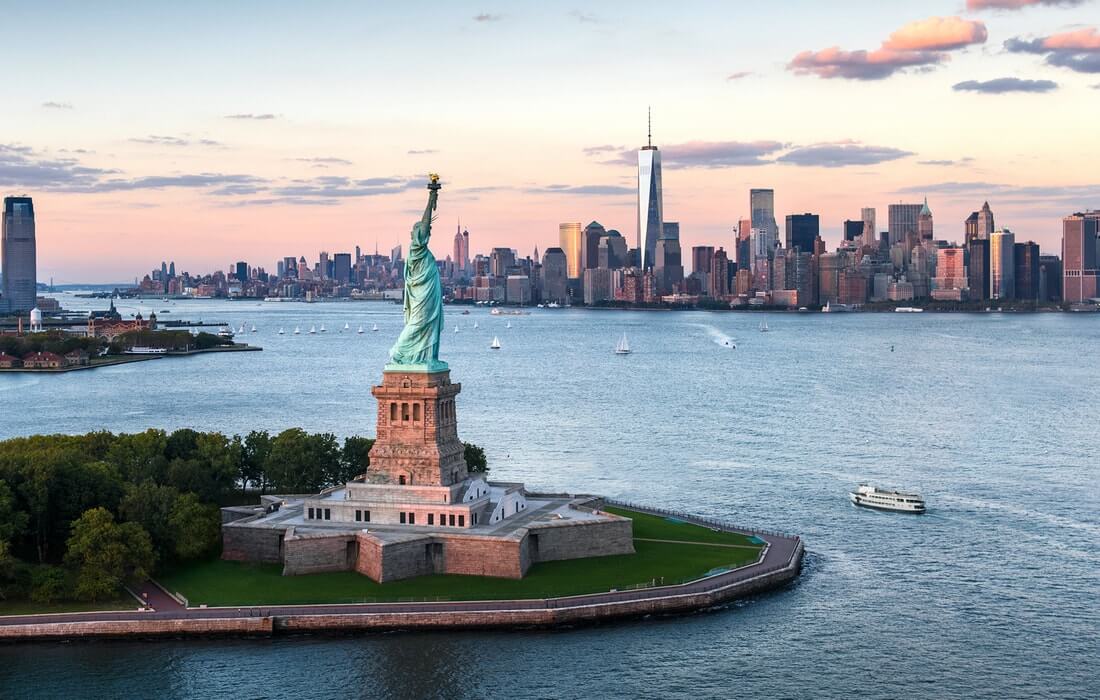 Needless to say, the US authorities were delighted with the gift. At the World Exhibition the head of the future statue was presented - it was decided to build it in full size already at the installation site.

In the United States for the French picked up a luxury apartment - a fort on its own island south of Manhattan with a stunning view of the vastness of America. Only here the pedestal was built reluctantly, but would definitely not refuse to get up on the low lady. The case involved the famous American journalist and publisher Joseph Pulitzer - after his call, he still managed to raise money for a pedestal.

It took 10 years to build the pedestal and transport all the prefabricated parts of the sculpture to a new house. And even the Statue of Liberty was already in place for four months. As a result, the opening was celebrated only on October 28, 1886.

From now on, the image of the Statue of Liberty has been placed on jubilee coins, $10 bills (torch only), postage stamps and emblems of sports clubs. Outlines or elements of the image are used on the emblems of state bodies and are the most popular print for holiday knickknacks. In the ratings of demand beats even Uncle Sam.

The Statue of Liberty has a museum and as many as two observation platforms - in the crown and in the torch. The paths to them are connected with the land by elevators and stairs. The statue and the pedestal are connected together, the communication systems work the same for them.

Freedom looks amazing regardless of age. But by the beginning of the 90s, she still needed to visit a cosmetologist and a stylist - then the first major closure for restoration took place. Since then, the number of visitors is limited. And after the terrorist attack on September 11, 2001, the guests of the Statue of Liberty are carefully inspected before climbing to the upper tiers.

The Statue of Liberty was and will be the main woman in the life of America. With its own character, appearance and demands. And, of course, you can hear about it a thousand times, but it's always better to meet you personally.

Do not know how to approach? Meet her friends! For example, Mr. American Butler will happily guide you to an audience. Write in the chat window, and, as they say in the birthplace of Liberty, voila!
Send a request
Also read
Empire State Building
The most famous skyscraper in New York has long become a grandfather, but does not lose ground. His spire did not leave indifferent even King Kong, he is considered one of the greatest architectural works… Read more
Times Square
Times Square is a legendary square. People go to New York just to stand there and gaze for at least a few minutes! Why and why is this place so appreciated by tourists from all over the world? We will… Read more
Woolworth Building
What unites Batman, Vladimir Mayakovsky and European Gothic cathedrals? Woolworth Building in Manhattan! Mix came out vigorous, communication is not obvious, so let's understand. Read more
Flatiron Building
Flatiron Building is not just an eccentric building in downtown New York City. This is Chicago luxury, the consulate of the Russian Empire and the curse for women. But first things first. Initially, the… Read more
Miami Beaches
Читать еще
How to rent a car in the USA
Gathered on a journey through the sunny states of the United States of America, but did not decide which means of transportation are more convenient? Thinking about car rental, but do not know where to… Читать еще
Why everyone loves Steve Jobs
Читать еще
Waterview restaurants in Miami
Do you want to enjoy lunch or dinner in one of the best restaurants in Miami, but a beautiful view of the sunset or the water is a very important criterion. Read our article about a dozen restaurants… Читать еще
Hoover Dam
Hoover Dam is one of the highest dams in the world, and at the same time a powerful hydroelectric power station. Tourists and residents come here to see the incredible scale of construction, go boating,… Читать еще
Craft Contemporary
Craft Contemporary is a building with more than half a century of history, a gallery of folk art. Since Los Angeles has become an important international art center, the Museum of Crafts and Folk Art… Читать еще
Statue of Liberty 5 1 0 0
Sharing: