The Cathedral of St. John the Divine is in many respects "the most." The longest American unfinished, the physically longest and most confused in terms of the original name - the Cathedral of the City of New York.

The Cathedral of St. John the Divine is the largest Anglican parish and the fourth largest among all the cathedrals of the world. It is located at the intersection of 112th Street and Amsterdam Avenue in northwest Manhattan.

He appeared as an annex to the Cathedral of St. Patrick. The Episcopal Church of New York (and especially its representatives involved in Freemasons) insisted on building an Anglican church so that all branches of Catholic believers would be happy and happy. With the project were determined for a long time, as much as 4 years. This laid the foundation for future leisurelyness.

Construction began in 1892 and, running ahead, did not end to this day. 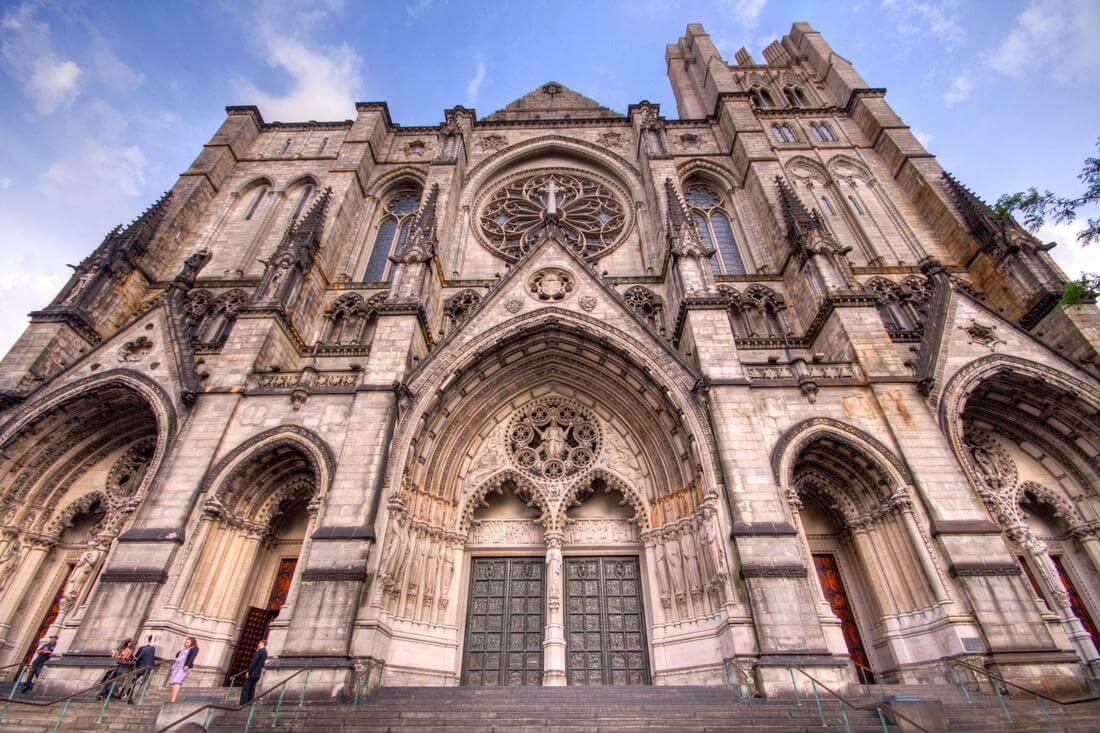 The difficulties of the construction process

Initially, the cathedral was conceived in the Byzantine-Romanesque style. To make the structure as stable as possible with huge volumes, it was decided to start with the installation of eight support columns. Each of them weighed 130 tons, only the process of their construction took a year. Everything that was after is very fond of associating with mysticism and the merger of the masons who financed the construction site, with the devil - they say, the higher this cathedral, the more it collects misfortunes.

Already in the process of building the facade, the architect suddenly died, the matter stalled. His successors decided to change the original project and modify everything, including the already constructed facade, in neo-gothic. Dismantling of existing structures took a lot of time, then again the construction ...

At the time of opening in 1941, it was already the fiftieth year of construction. The cathedral was still not completed. A couple of days after that, Japan attacked Pearl Harbor Bay - disputes around the Masons, their hellish energy and their eerie temple crawled across New York with a new force. Construction stopped again. And so it happened more than once. 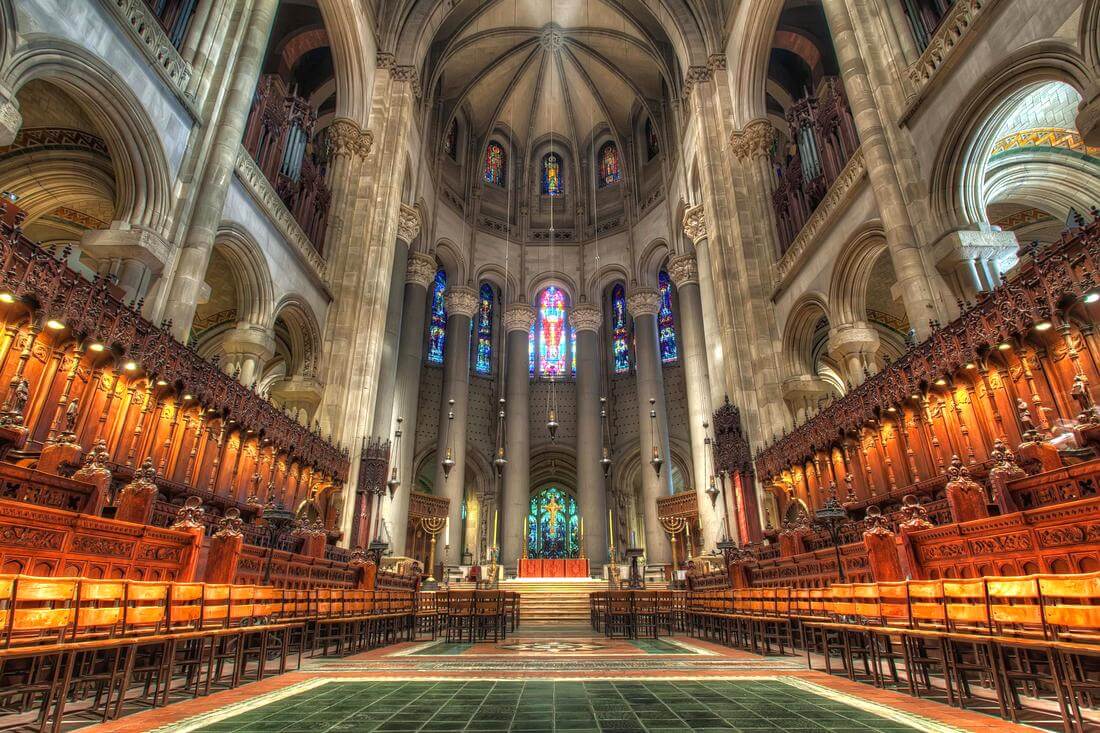 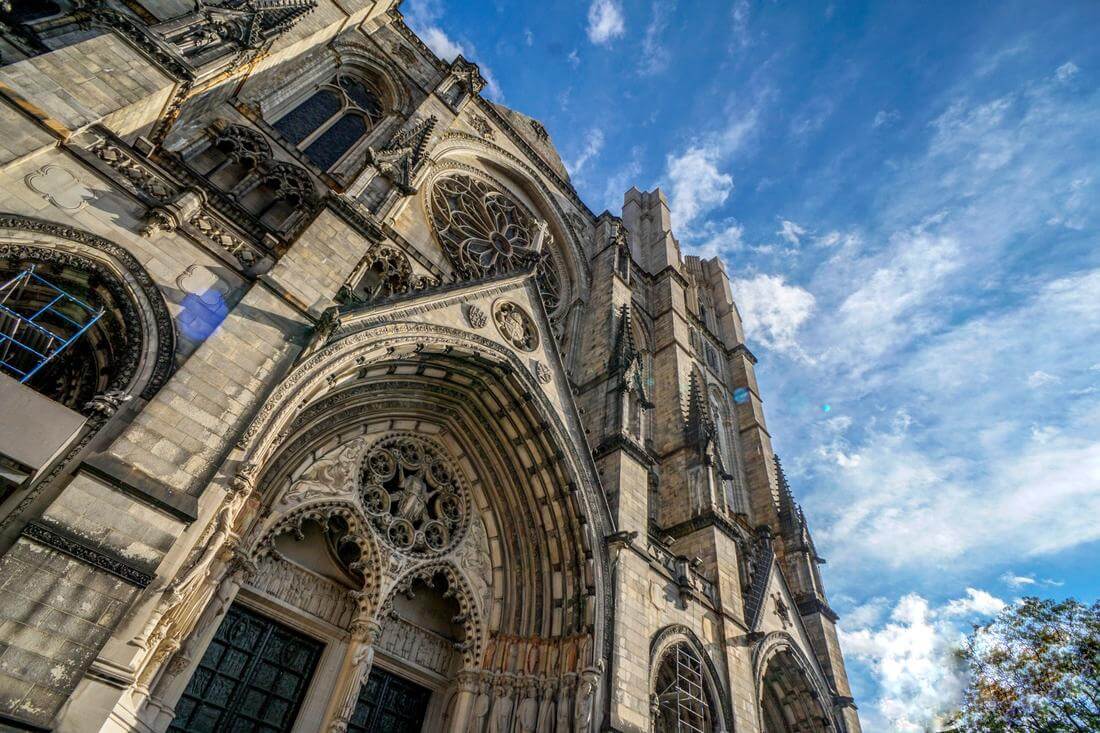 And what about conspiracy theories today?

A simple visitor may not notice the unfinished - the most serious work was completed in the 90s. The cathedral is really striking in size: ceiling ceiling reaches 38 meters in height, and from the entrance to the opposite wall lies a distance of 183 meters. 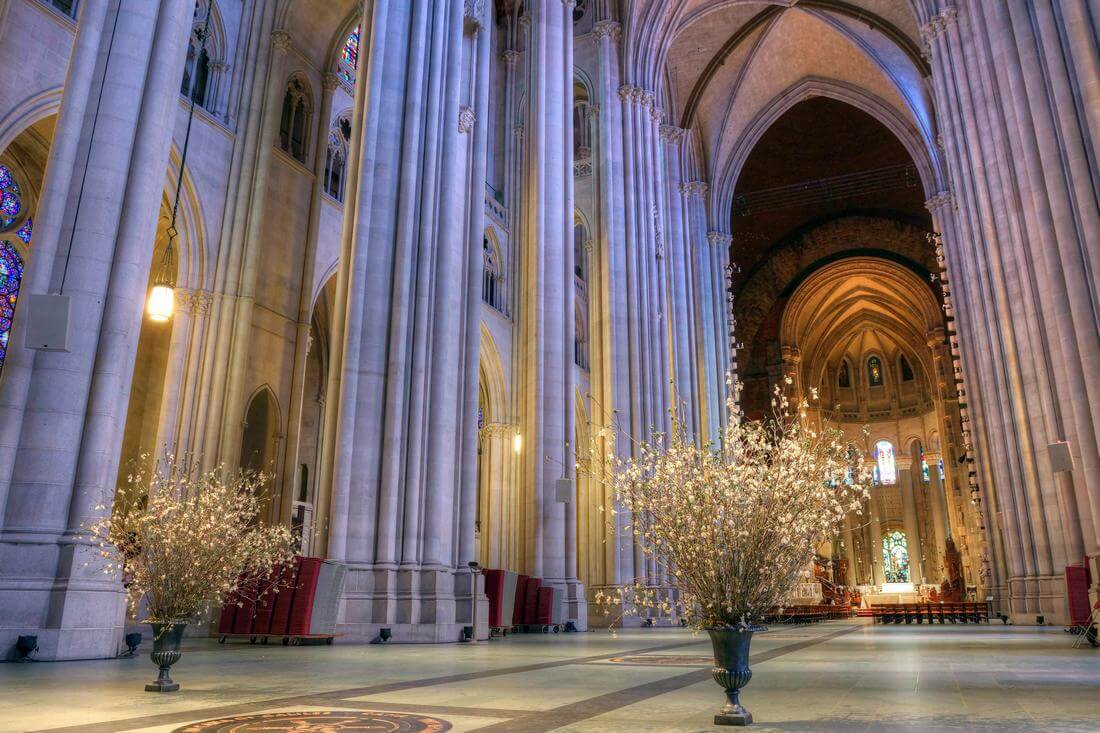 Along the walls are 32 stone figures of saints, carved by the best Italian and English masters. On the massive bronze gates are scenes from the Old and New Testaments, and above them stands the figure of John the Divine himself.

Stained-glass windows are still in draft condition - due to the fact that the construction of walls has not yet been completed, it was decided to leave them for later in order not to damage the precious glass. Therefore, for the time being, parishioners see them in mono-color or from colored plastic. But in the cathedral there are as many as five organs, one of which is considered the most powerful in the world.

Yes, and the area around it looks pleasant and well-groomed. The cathedral is surrounded by a garden, each plant in which is somehow mentioned in the Bible. There is also a Fountain of Peace in the garden with a sculpture of the archangel Michael, who defeats Satan. Nearby there is a Catholic school, a building for synodal councils and a poorhouse. Everything seems to be good, but the cathedral has its own oddities.

If you look at the pedestals of statues, you can see a lot of entertaining scenes. They are carved into the crumbling Brooklyn Bridge, from which people and cars float to the Hudson River, the flooded Statue of Liberty and the New York Stock Exchange ...

Particular attention is attracted by the tsunami scene in New York: a wave washes away the twin towers of the World Trade Center. This pedestal was installed 4 years before the 9/11 tragedy. Therefore, among the already frightened masons of Americans goes the theory that as soon as the cathedral is completed, all the “predictions” will come true - as God's punishment for incomprehensible cults.

Whether you believe in mysticism or not, the Cathedral of St. John the Divine is still interesting as part of the motley New York. Eclectic and beautiful in its mysterious incompleteness.

American Butler will help organize leisure in New York so that you will not miss a single interesting corner - just leave a request, and we will take care of your impressions.
Send a request
New York
Sights
Festivals
New York City Restaurants
New York Parks
New York Museums