St. Louis Cathedral is one of the most famous sights of New Orleans. This is a respectable building, whose spiers look at the square and the statue of President Andrew Jackson.

March 1721 French engineer Adrien de Pauger arrives in the city by decree of the chief engineer of Louisiana. The main purpose of the visit is to map out a place for those who are preparing to build a church. 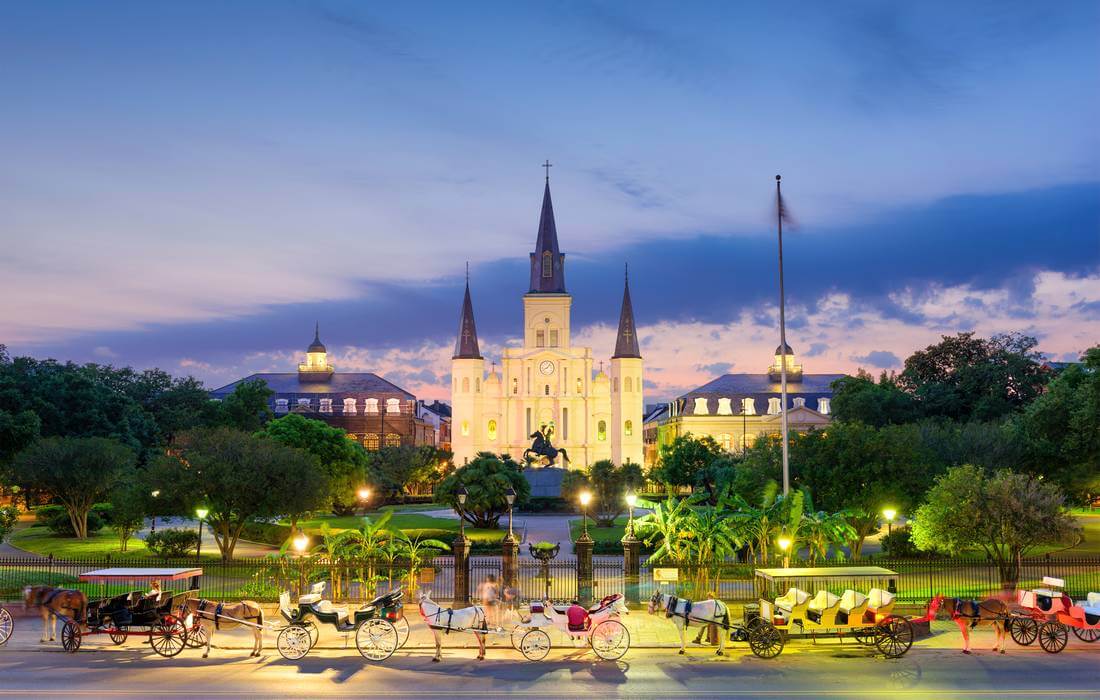 The new parish church, dedicated to Louis IX, king of France, was to be the first brick-to-pillar building in New Orleans. It was a new efficient construction method that was used in Louisiana until the middle of the 19th century.

De Pauger did not live to see the completion of the church. In his will, he asked to be buried in an unfinished building.

For six decades, the church stood, French and Spanish governors worshiped there. In this church were baptized children of colonists and children of slaves. Here ordinary parishioners and nobles got married. Through its doors, the remains of believers were carried out on their last journey to the cemetery.

And life went on as usual, until in 1788 There was no terrible fire. A fallen candle set fire to the lace draperies of the altar in the house of the military treasurer. Among the buildings that had burned to the ground were the Cathedral of St. Louis, the residence of the priests and the city council.

In one of the letters, pastor Antonio De Cedella described the speed with which the fire devoured houses. He wrote that he had sent several notes to the house of a tobacco industrialist, located in the center of the fire in two shots from a rifle, but they had not reached - the house of the tobacco man was already burning.

Almost a year passed before the charred remains of the church were cleared. At the beginning of 1789, the construction of a new cathedral began, which was completed only by Christmas 1794.

In 1819, the city council watchmaker bought a clock and a bell, and also built a central tower to accommodate them. In 1829 an organ was placed in the cathedral, and in 1825, the Italian artist Francisco Zapari decorated the interior and three altars. 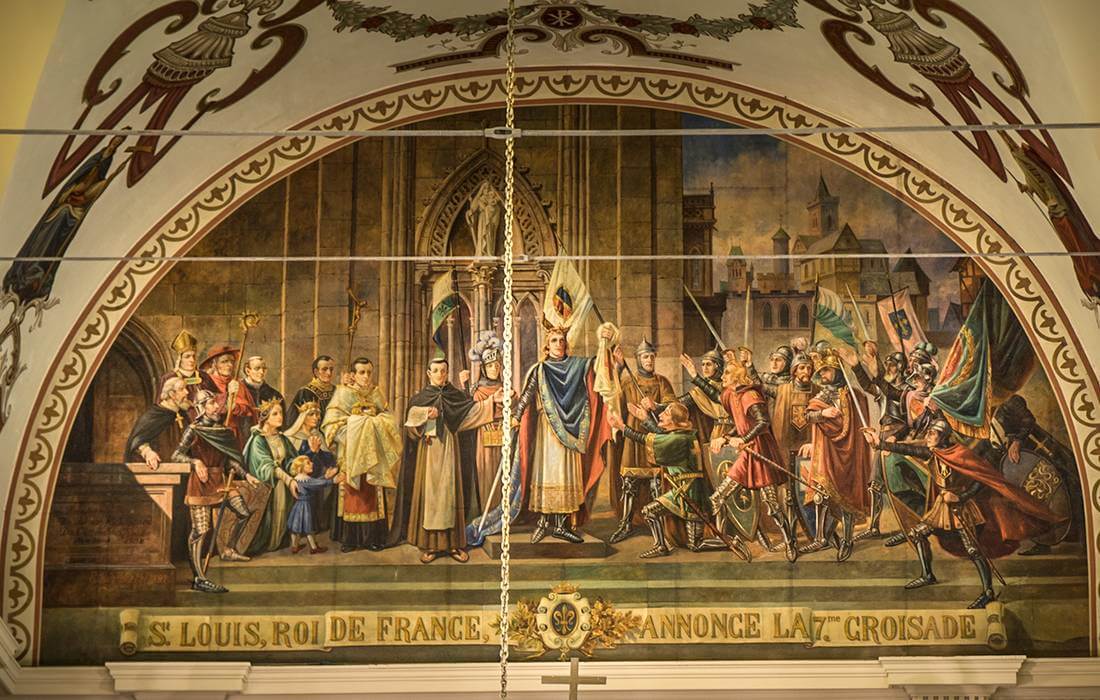 In 1844, Baroness Pontalba presented to the city council a project for the reconstruction of a building that could no longer accommodate the congregation of a growing city.

Chief Architect Proposed lengthen the church and add galleries, but was not sure that even these changes would increase the area sufficiently to meet the needs of the growing community.

As a result, the contract was signed by the Irish builder John Kirwan for the restoration of the cathedral. The contract required reconstruction, which would leave intact only the side walls and flanking hexagonal towers of the old church.

But as construction progressed, it became obvious that the side walls would also have to be demolished.

During construction, the central clock and bell tower collapsed. This catastrophic incident caused damage estimated at $ 20,000. In the following months, experts tried to determine the cause of the collapse. Bottom line - Kirwan was fired along with the architect, and the work was completed in the 1850s.

In September 1987, the cathedral witnessed the historic visit of John Paul II, and the square in front of the church was renamed in honor of the Pope. Soon after this, the status of the cathedral was upgraded to the basilica.

The towering central spire of the cathedral, complemented by two smaller spiers and a perfectly symmetrical facade, was a favorite subject for artists, photographers and filmmakers. for many years.

At the back of the cathedral is the garden of St. Anthony, in which stands a statue of Jesus with arms raised. At night, searchlights project an impressive shadow from the statue onto the cathedral.

Although it is a Catholic prayer house, the rich history and beautiful design of the cathedral attracts visitors of all denominations and nationalities. The interior is open for independent excursions during the absence of mass, weddings and funerals.

The stained glass windows and paintings in the temple are outstanding works of art, like the gilded rococo altar that adorns the façade of the church.

Those who come to the Cathedral of St. Louis, can purchase religious items in the gift shop, and all proceeds will go to the maintenance and upkeep of the building. 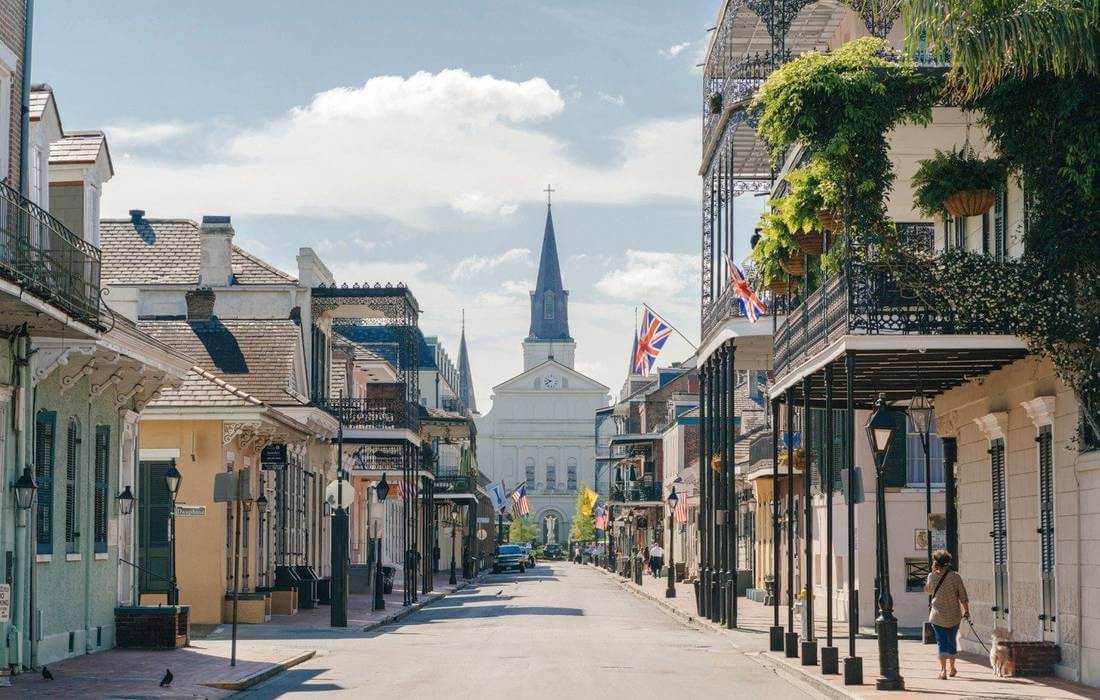 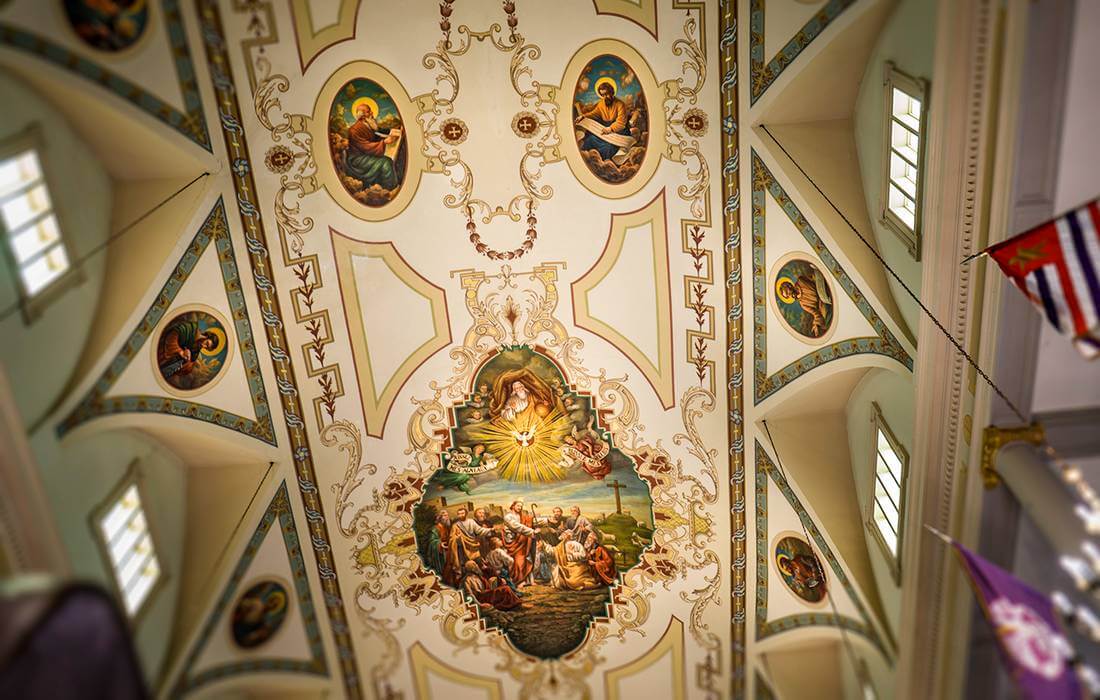 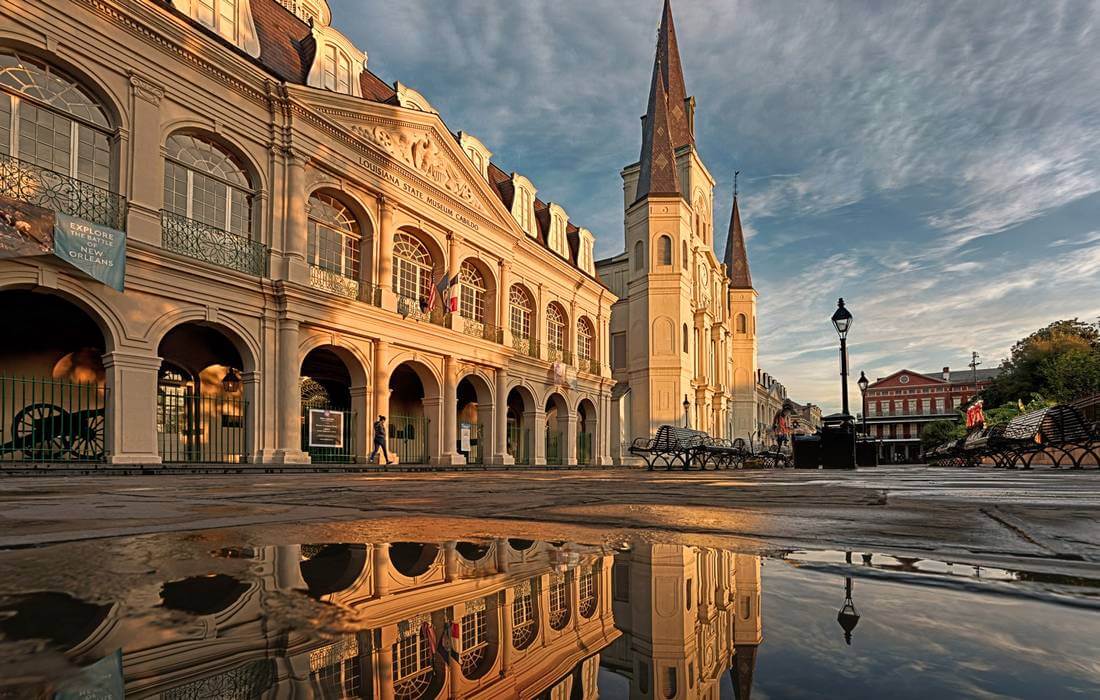 Visit the Cathedral of St. Louis, you can use the travel agency American Butler. Contact us and we will find you a guide.
Send a request
Also read
Pontalba Buildings
Pontalba - a residential complex consisting of apartment buildings. It is located in New Orleans, on Jackson Square. The complex bears the name of the builder, Baroness Pontalba, the daughter of Andres… Read more
Metairie Cemetery
Of the 42 cemeteries of New Orleans, Meteyri is the most atmospheric. Here they spend their days wandering among seven thousand tombs and mausoleums. What hides the "city of the dead"? Read more
Church of St. Alphonsus
The Church of St. Alphons is a historic building of a former church on Konstanz Street in New Orleans, Louisiana. Completed in 1857, it is one of the few that has preserved the national image of a rich… Read more
Bourbon Street
For many visitors to New Orleans, Bourbon Street embodies the life of a party city. The street is lit by neon lights and pulsing with music. Let's see what these houses store for bright colors. Read more
Boardwalks in the USA
Читать еще
Real Estate in the USA
We decided to buy property in the most heavenly spot of the planet - the USA? But you doubt how to buy comfortable housing for your benefit? You need to know some nuances that will help in your decision.… Читать еще
Kurt Cobain and Nirvana
Читать еще
Italian restaurants in Miami
Florida's best trattorias elevate the spiritual simplicity of the kitchen to unattainable heights and help visitors to appreciate the authentic flavors of the country's characteristic culinary regions.… Читать еще
Craft Contemporary
Craft Contemporary is a building with more than half a century of history, a gallery of folk art. Since Los Angeles has become an important international art center, the Museum of Crafts and Folk Art… Читать еще
St. Louis Cathedral 5 1 0 0
Sharing: