The Mercedes-Benz Superdome is a domed sports and exhibition center located in the Central Business District of New Orleans. Serves as a home stadium for the New Orlean Saints and the National Football League teams.

Due to the fact that the building is located in one of the main tourist destinations of the United States, the Superdome regularly hosts major sporting events, the main of which is the Super Bowl.

Businessman David Dixon conceived the stadium to convince the National Football League to play in New Orleans more often. In response, Dixon was told that the NFL would never do this without the dome stadium. The first bell was received.

Dickson received support from Louisiana Governor John McCaten. In 1966 they visited the Astrodome stadium in Houston, where McCaterin declared: “I want the same, only more.” Construction has begun.

The stadium was conceived as multifunctional: they were supposed to play football, baseball and basketball. Also present were conference rooms that can be rented for various purposes. 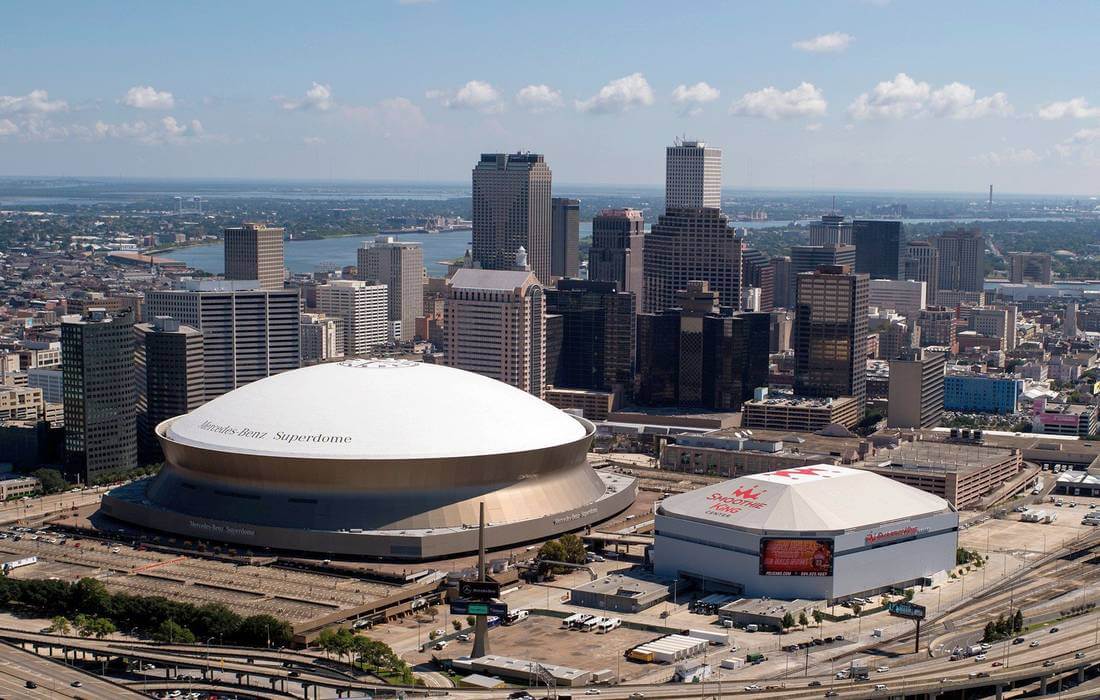 As the dome was built, different people developed eccentric variants, to the extent that the dome was proposed to be made from sugar. Hope were that the stadium will be ready for the NFL games in 1972, and the final value of the object will be 46 million dollars. Instead, construction did not begin until August 1971, and it was completed only in 1975.

There was an oil crisis. Inflation crept up, transportation costs go in the same place. Delays in construction for all political reasons also did not make life easier. As a result, the final price of the stadium took off up to 165 million dollars.

Police are interested in such spending. A special commission conducted an investigation in search of corruption and financial fraud, but this did not prevent the stadium from opening.

The first in the Superdome played New Orleans Saints, and already in 1978 was the twelfth Super Bowl. It is important to understand that this is so steep - it is at this time that the final game of the National Football League is taking place. Super Bowl is the real show, which even people far from sports are interested in. In recent years, the championship has been collecting 100 million viewers, and the display of short advertisements during the broadcast is worth $7 million. So if NFL players come to play with you, and it’s always the case, it’s a victory and the cult status of the stadium for all times.

The Superdome received international attention at the time of the storm of Hurricane Katrina. Thousands of people seeking asylum found it here. As a result of the storm, the building was severely damaged and was closed for a year. The stadium was fully repaired for $185 million and reopened in September 2006.

Its reopening was a spark in the city’s recovery from natural disasters and revived the state’s sports and entertainment business.

A year later, the German automaker Mercedes-Benz acquired the rights to the name of the stadium. It was originally called the Louisiana Superdome. The new name came into force in October 2011. At that time it was the third stadium, which had the corporate name of the concern.

Naturally, during this time, the stadium has been expanded and reworked many times. Here are just some of the numbers that characterize the stadium. 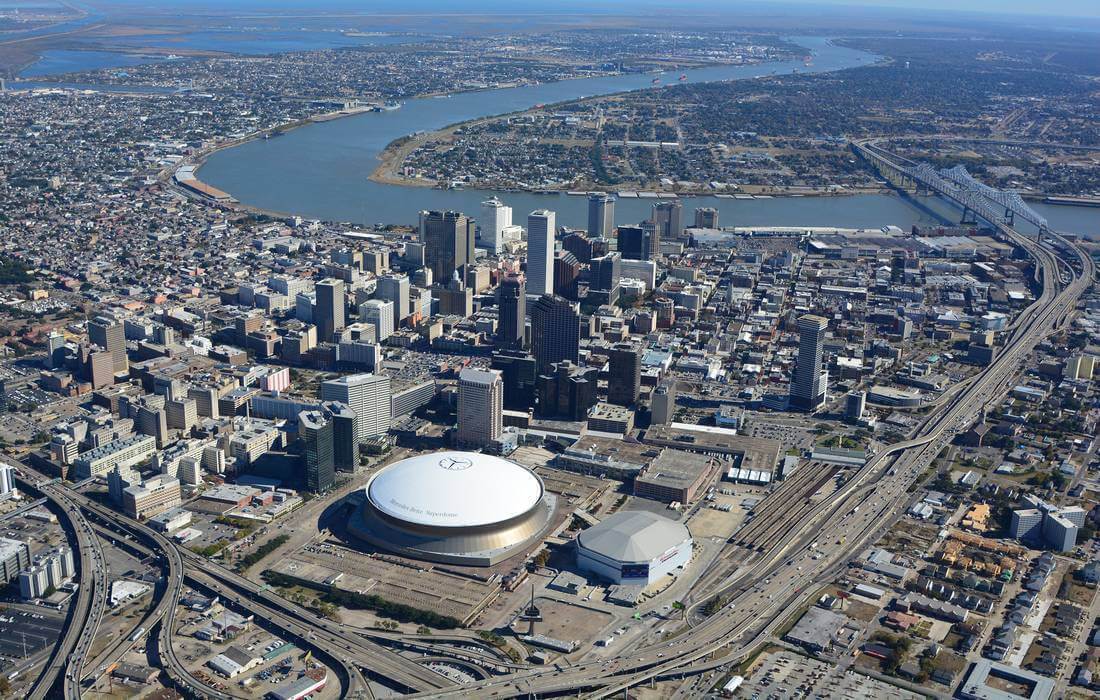 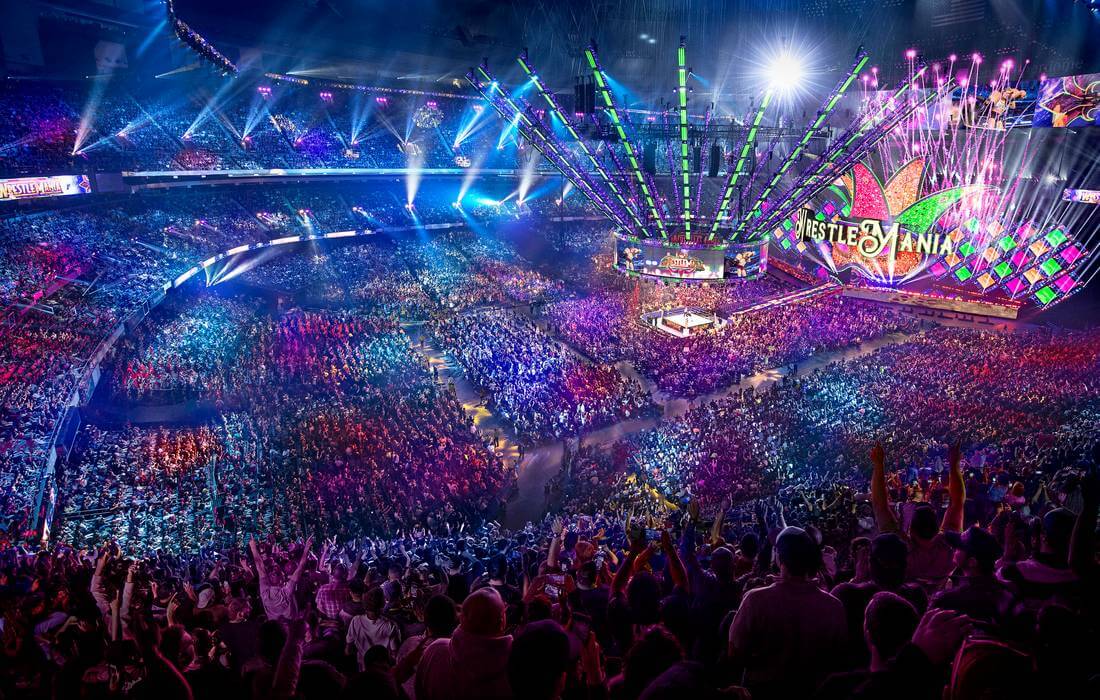 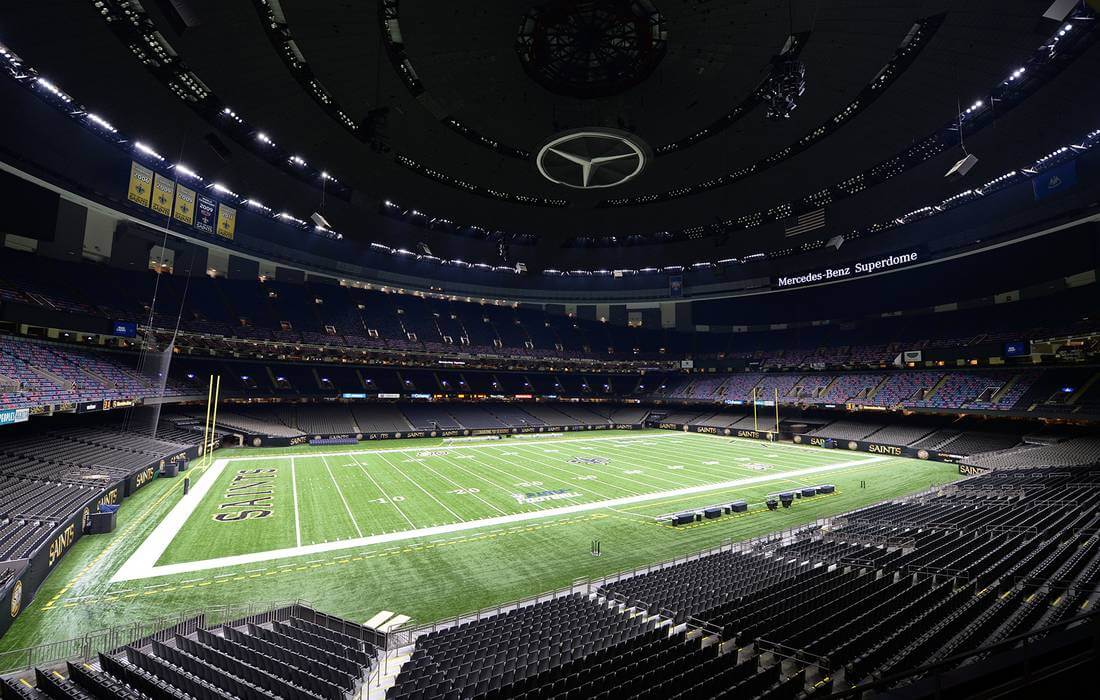 Since this is the home stadium of the New Orlean Saints team, you can see their matches with other football teams at the stadium: Los Angeles Rams, Philadelphia Eagles, Atlanta Falcons and others.

In addition to regular competitions between the teams, the stadium regularly hosts concerts of stars. Let's look, for example, at the schedule for the second half of 2018. Here is what we will see there:

The Superdome Stadium is a symbol of New Orleans strength, his unbending will and determination. Be sure to visit it if you are in New Orleans. And the American Butler company will help with this!
Send a request