The French Quarter is the only untouched colonial settlement left in the United States. This is the historic center of New Orleans, which since 1718 has withstood hurricanes, floods, fires, yellow fever epidemics, wars and industrialization.

Until 1718, only Indians lived in New Orleans, mainly from the Choctaw tribe. Because the land lies between the Mississippi River and Ponchartrain Lake, Native Americans realized that the land link between the river and the lake would be important for travel and commerce. 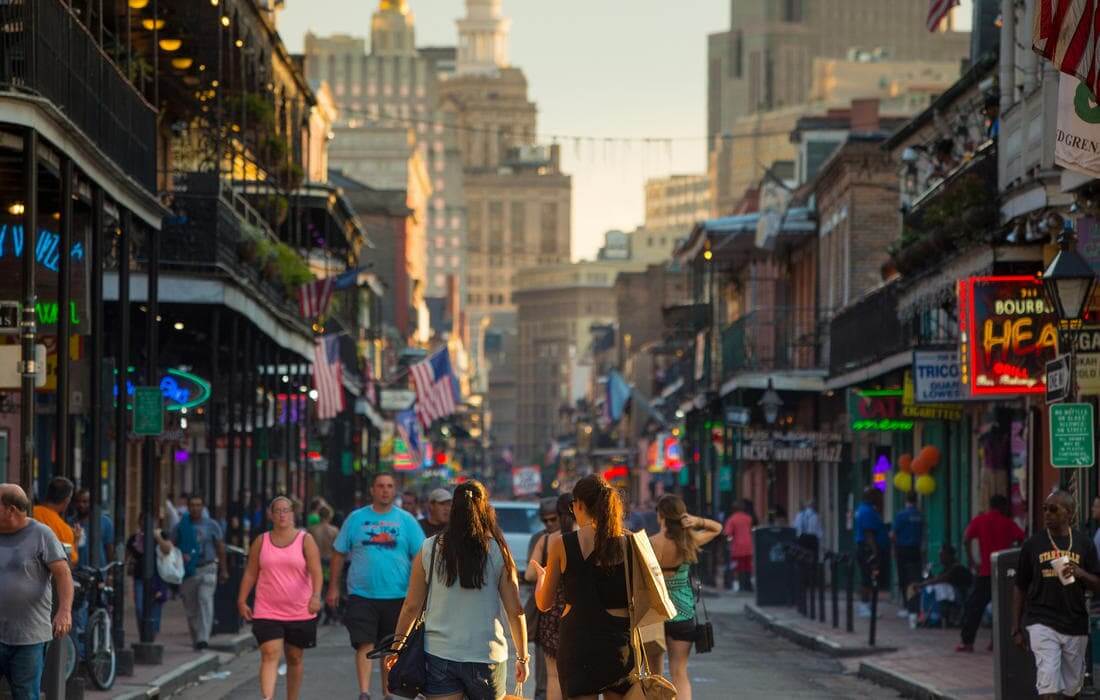 In 1699 two brothers, Iberville and Bienville, moved from France and built a fort on Lake Pontchartrain. Their goal was to found a city nearby.

Workers from 80 people cleared reed beds and cypress wood, built one large warehouse and about 100 log cabins randomly scattered along three streets along the riverbank. A church, a parish priest’s house and a prison were built on the square.

In 1788 almost the entire quarter burnt down, and these are 850 buildings. When restoring were built houses in the Spanish and Caribbean style. In 1788, New Orleans expanded beyond the French Quarter. After another fire, the Spaniards introduced building codes requiring the use of bricks, tiles and slate.

By 1803, the United States bought Louisiana and the Americans began to fill the city. The total population has grown in half a century from 7,000 to 116,000 people.

The 1830s marked the peak of their heyday. Thanks to cotton and sugar, New Orleans has become one of the richest, fastest growing cities in the United States. The French Quarter has become a hub for retail and banking.

A decade later, the Americans began to win in rivalry with the French - large stores, banks and owners of huge mansions moved to the “American sector”.

Despite this, the French Quarter still retains its charm, and the local market and restaurants are loved by many. 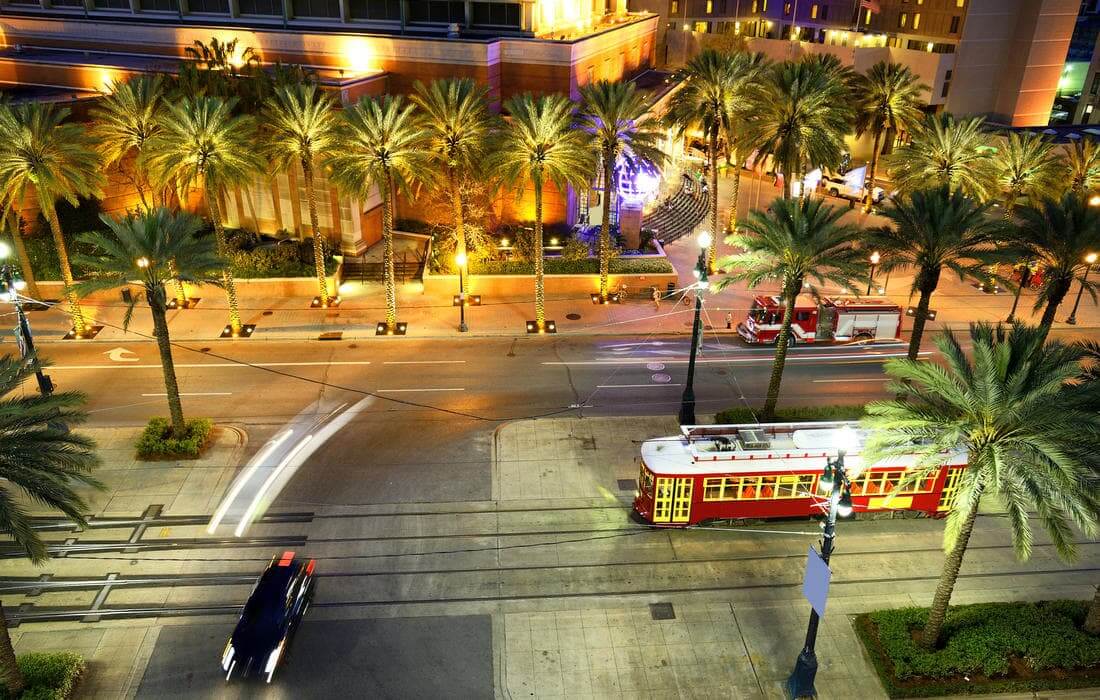 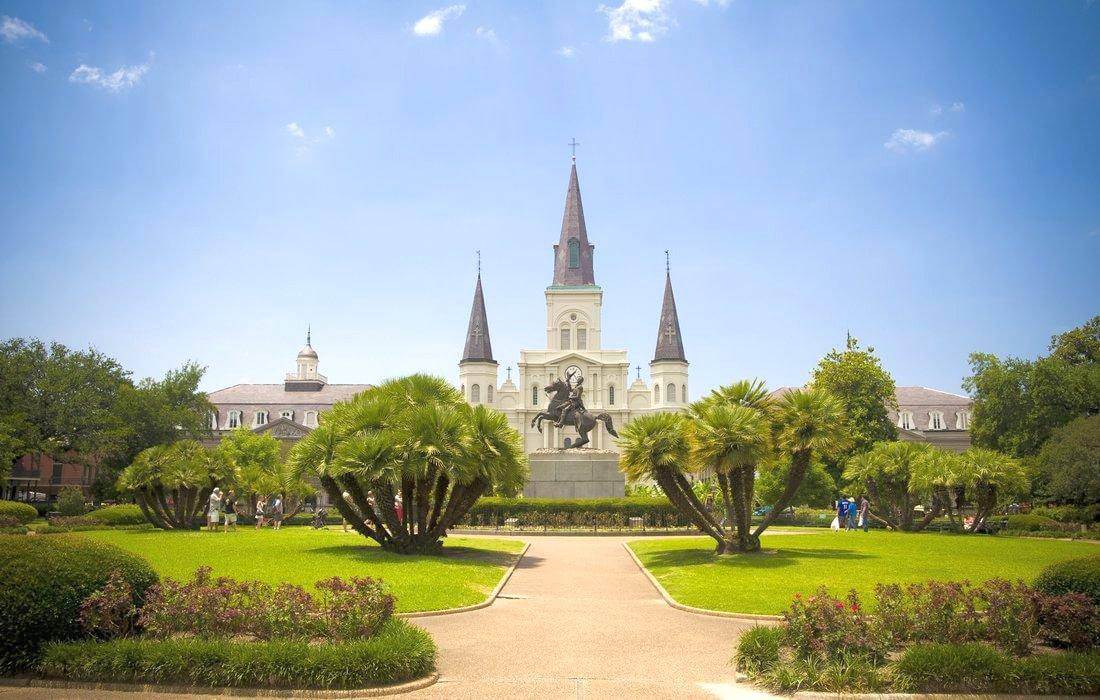 Creole homes do not have internal corridors. This feature led to secluded courtyards behind the houses, where other smaller buildings usually stood: kitchens, stables, facilities for children and domestic workers. 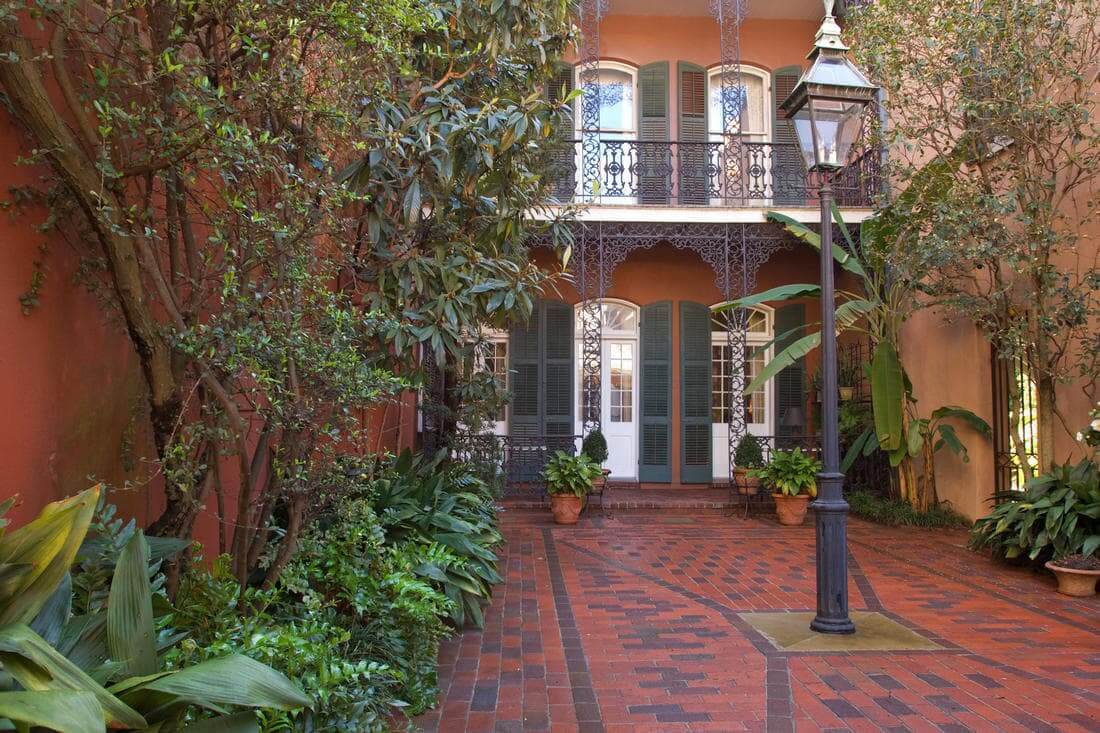 The courtyards themselves were a convenient stronghold of everyday life: cooking, washing and keeping livestock. Creole style remained popular until the 1830s.

With the advent of the Americans, a new style was introduced: an American townhouse with interior corridors and stairs. The Greek Renaissance and Italian architectural details became popular throughout America and were often used in the facades of these townhouses.

In the late 1800s, industrialization came to New Orleans, and in the French Quarter, buildings near the river turned into warehouses, factories, mills, breweries and sawmills. Many beautiful houses turned into laundries, factories, shelters for workers.

After World War II, the quarter became a battleground between innovators and conservatives. Innovators have come to demolish old houses in the name of progress.

The conservatives managed to obtain the status of a “National Historic Monument”, which allowed them to restore the old residences in their original form.

Turn New Orleans into a giant game board with this fun adventure. Combine the excitement of the race with a fun excursion. The group will be divided into two teams, which, guided by a smartphone, will explore the sights when solving problems.

Free walking tour, which includes not only the French Quarter, but also other legendary quarters and cemeteries of New Orleans. If you like, after the tour guide you can pay a tip.

Family walking tours in the French Quarter, designed specifically for children and teenagers. The historical tour is written by a teacher, interactive and filled with fascinating facts from the past.

Visit the French Quarter with the help of the American Butler agency - we will find a guide and prepare a tour for you.
Send a request
Also read
Royal Street
Royal Street is a street in the French quarter of New Orleans, Louisiana. This is one of the original streets of the city, dating from the beginning of the 18th century. Known for antique shops, art galleries… Read more
St. Louis Cemetery
St. Louis Cemetery is the oldest cemetery in New Orleans. It was opened in 1789, when the previous burial could not withstand the growing population of the city. This is a complex of 3 separate cemeteries.… Read more
Gallier Hall
Gallier Hall - the most important building, built in the pre-war period of New Orleans. This impressive house was created by an outstanding architect, James Gallier. The building has passed the history… Read more
Cafe du Monde
Although there are many coffee shops in New Orleans, and many of them are located in beautiful and historic quarters, not one is more recognized than Café du Monde. A trip to New Orleans will not… Read more
Taxi in the USA
Читать еще
Buying a home in Miami
Читать еще
Why everyone loves Steve Jobs
Читать еще
US Michelin restaurants
We continue the theme of restaurants! We take above - restaurants throughout America. And not just good, but the best of the best. So, the top 10 three-star restaurants according to the Red Michelin Guide.… Читать еще
Hoover Dam
Hoover Dam is one of the highest dams in the world, and at the same time a powerful hydroelectric power station. Tourists and residents come here to see the incredible scale of construction, go boating,… Читать еще
Craft Contemporary
Craft Contemporary is a building with more than half a century of history, a gallery of folk art. Since Los Angeles has become an important international art center, the Museum of Crafts and Folk Art… Читать еще
French Quarter 5 1 0 0
Sharing: