For many visitors to New Orleans, Bourbon Street embodies the life of a party city. The street is lit by neon lights and pulsing with music. Let's see what these houses store for bright colors.

When visiting New Orleans, there is one street that you should never miss - Bourbon Street. And no, it is not named after the famous whiskey.

Bourbon Street is a tribute to the ruling family of France, the House of Bourbons. Royal engineer Adrian de Pauger, who designed the city in 1721, named all the streets of the French Quarter in honor of the French royal houses. 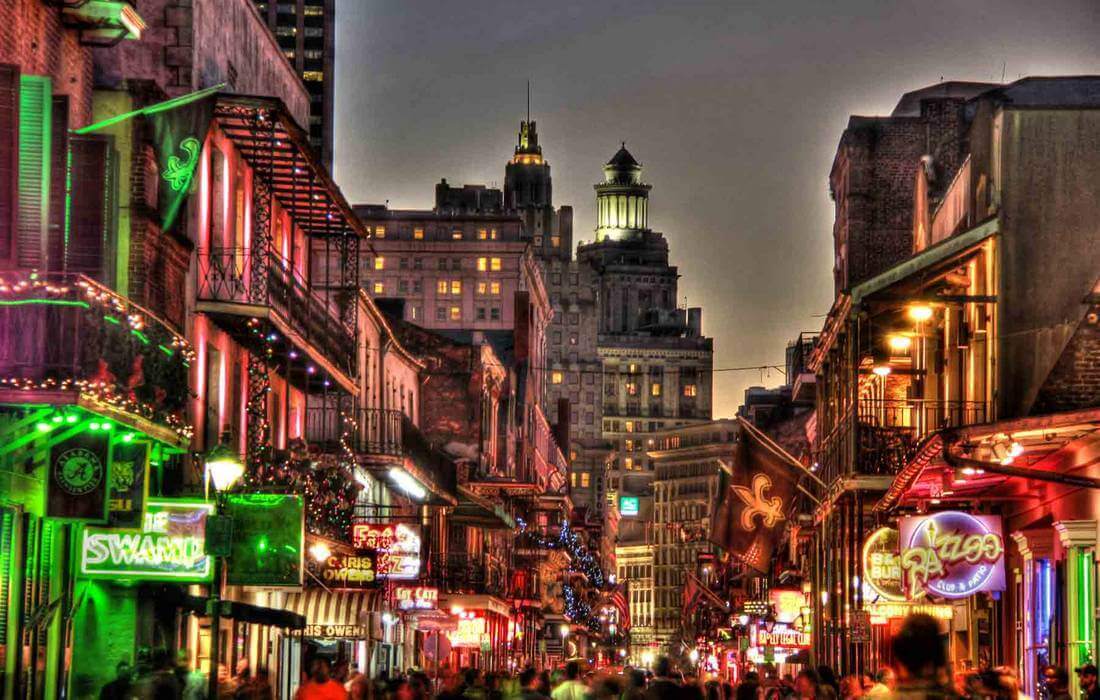 The street remained residential until the beginning of the 20th century. In 1905, Jean Galatuar opened his own restaurants, shortly after, commercial real estate, which attracted tourists, began to flow into the once-residential area.

After World War I, the French Quarter became a source of income for the city, and places began to open everywhere. During World War II there was an opportunity to earn big money on immigrants and the military. Began to open nightclubs, jazz halls and bars. Here one could find burlesque shows, strip shows and exotic dancers.

AT In the 1960s, under the leadership of Attorney Jim Harrison, a step was taken to clear Bourbon Street. AT In 1962, two months after his election, the police began to close entertainment facilities for adults.

When Mayor Mun Landryu took office at In 1970, he threw all his energy into stimulating tourism, making Bourbon Street pedestrian. But there were also critics that were outraged by the dominance of souvenir shops and offices. They also claimed that the historical value of the street was gone.

On April 5, 2018, a giant saxophone almost 11 feet high was opened on the street as a reminder that New Orleans is the birthplace of jazz. 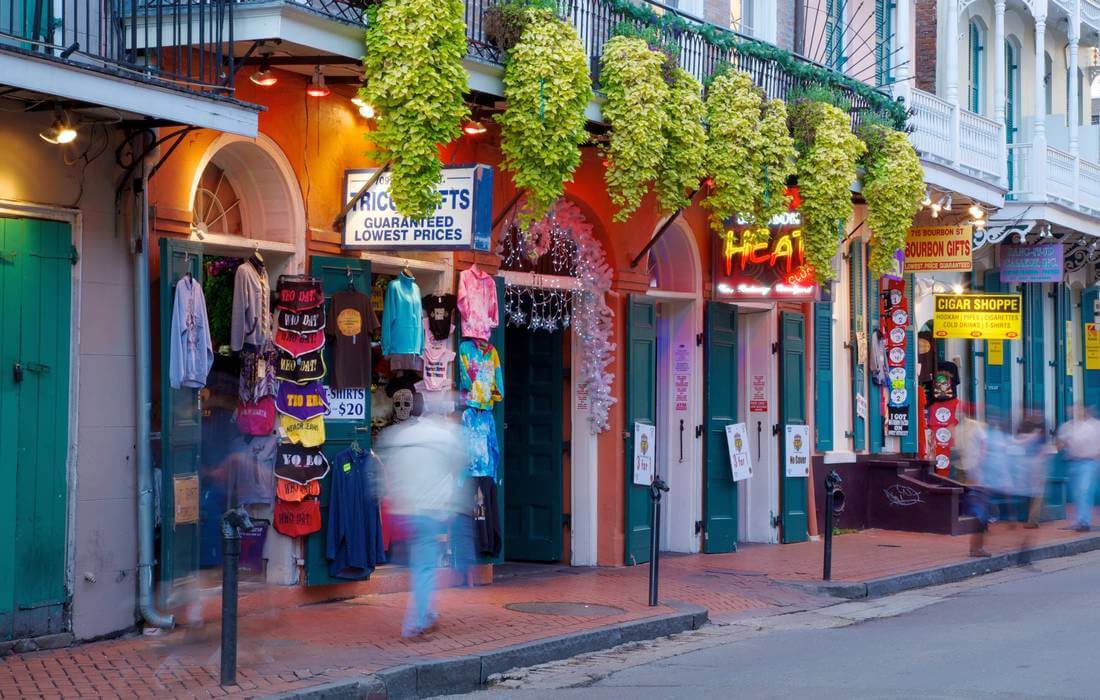 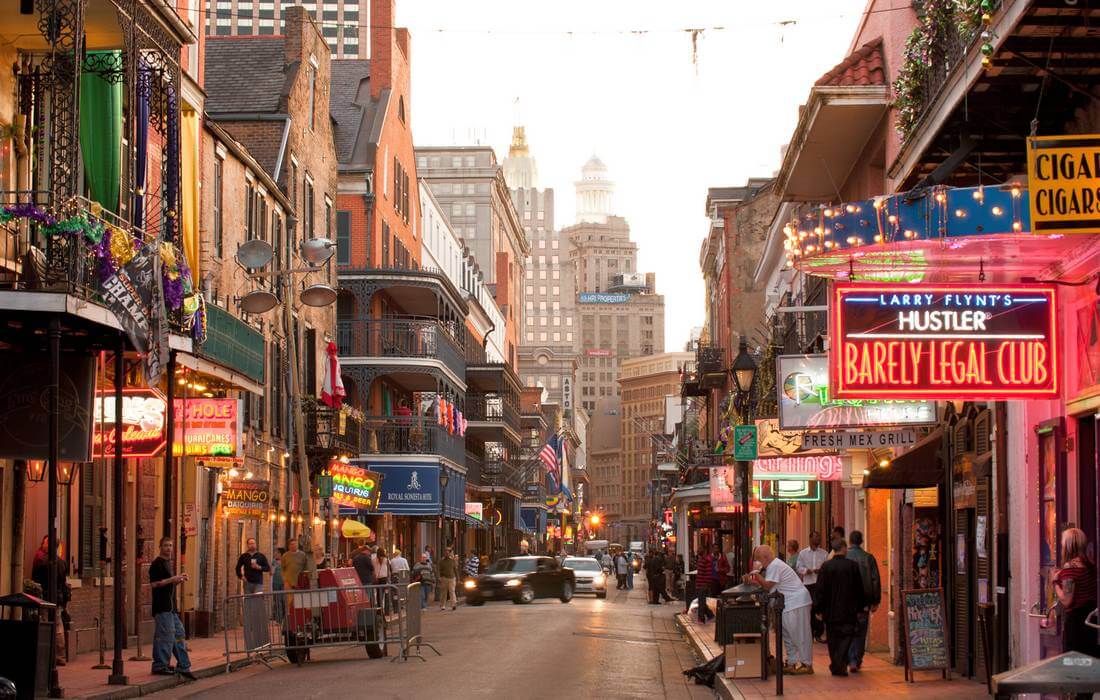 Bourbon Street is conveniently located in the heart of the French Quarter. It is just 4 blocks north of the Mississippi River and 2 blocks north of Jackson Square. Nearby are several bus stops and a cable car.

Upper Bourbon Street is the most visited section of Bourbon Street. towards Canal Street - eight blocks with bars, restaurants and souvenir shops.

Most bars are located in the center. Popular spots include Pat O'Brien’s, Johnny White’s, the Famous Door, Spirits on Bourbon and The Cat's Meow.

The most famous restaurant on Bourbon Street is Galatoire’s, which represents the traditional cuisine of New Orleans and has a dress code.

More than a century-old gourmet restaurant, known for charismatic waiters, is a must-see. Most visitors prefer to walk at lunchtime.

In the courtyard are statues of famous musicians of New Orleans, including Pete Fontaine, Louis Prim and Allen Toussaint. This is a great place to sit down and take a break from worries.

Voodoo is not only hypnotized people stuck with dolls and curses with needles. This store was advertised as the home of Queen Voodoo in New Orleans. This is a great place to explore, where you can buy branded amulet "gri-gri".

Just around the corner from the Bourbon is the Preservation Hall, which is considered the main place where you can hear jazz. This small jazz club keeps the scene intimate as it was - there are only 100 entrance tickets, but even this does not reserve you a seat. Many have to stand or sit on pillows and benches, but it's worth it.

This hotel is one of the most luxurious places on Bourbon Street, was opened at 1969 The land once contained stables, houses, and even a brewery. The hotel’s architectural style is unique to New Orleans, as its exterior is designed in the style of typical buildings. 1830s.

According to historian Richard Campanella, the windows and doors of the street are open to stray crowds, so it is not surprising that the famous walk on the sidewalk, known as “go cup”, was invented on Bourbon Street. In New Orleans, much is changing, but the magnificent colors and excitement of Bourbon Street remains the same.