Aquarium of the Americas in New Orleans

Aquarium of the Americas - aquarium in New Orleans, Louisiana. It is administered by the Audubon Institute, which also controls the zoo, the butterfly garden and the insectarium. The building is located on the banks of the Mississippi River, on the edge of the French Quarter. 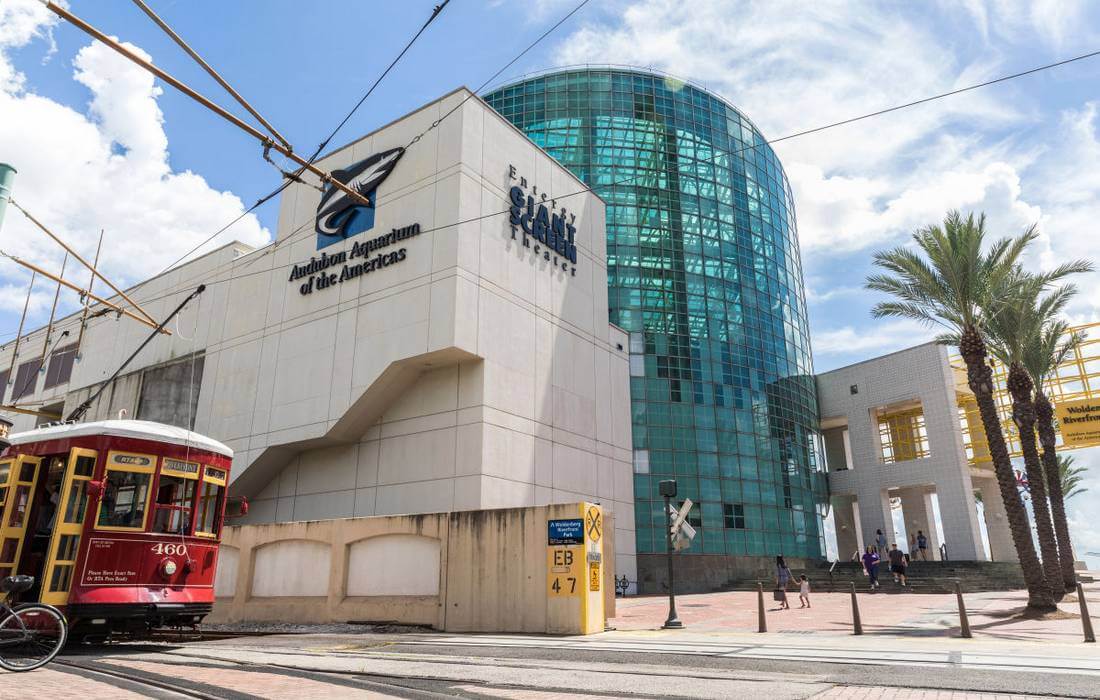 Not far from the Mississippi River stands the extraordinary Aquarium of the Americas - one of the best museums of its kind in America. Here, the visitor will find 15,000 marine inhabitants representing 600 species.

The aquarium is a home for fish and sea creatures of all kinds, where visitors get to know some of the most fascinating creatures of the ocean. For example, the Caribbean Reef Tunnel is 30 feet long and allows the visitor to see the marine life of the Caribbean, which only divers see. A new gallery of seahorses shows these beautiful creatures that swim gracefully between algae in their home and glide on the water.

Visitors will also find rare and endangered species. For example, the white alligator - only 18 of these animals were found in the swamp of Louisiana. Their steel blue eyes and white skin fascinate. Among the Cajuns, seeing the white alligator is considered luck!

Want to stroke the shark? Here is your chance. A shark pool allows visitors to touch a small shark and talk to a naturalist. Want to be entertained by sea otters, rare neon frogs or funny penguins? They are all here!

If you are interested in anaconda, poisonous frogs and exotic birds, visit the Amazon rainforest exhibition. 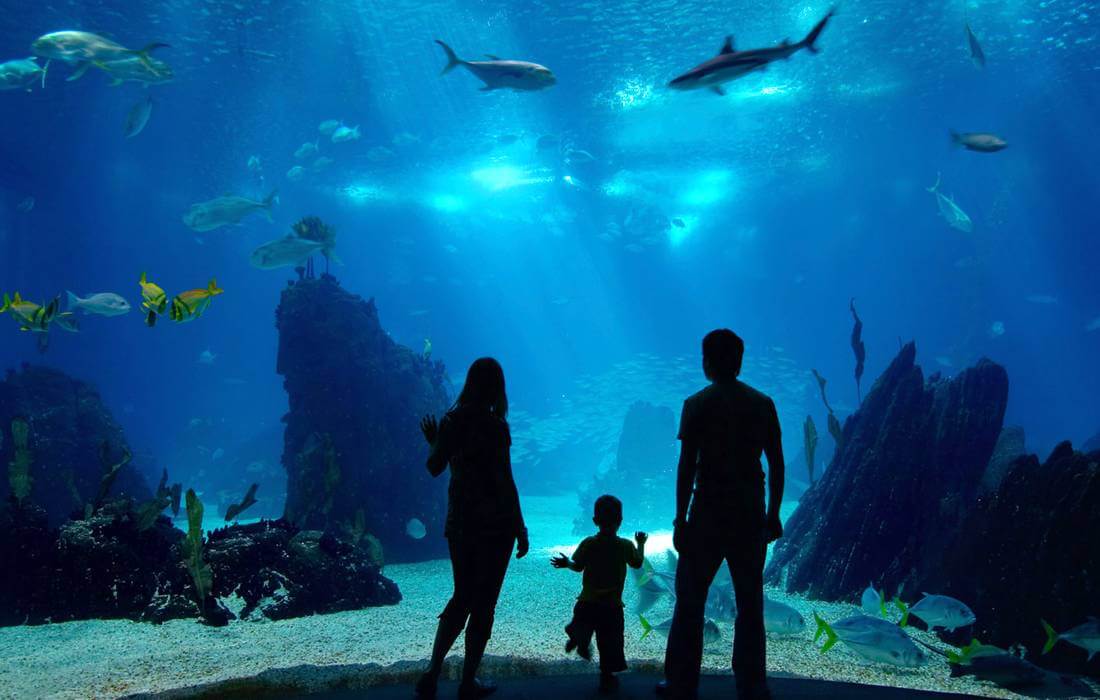 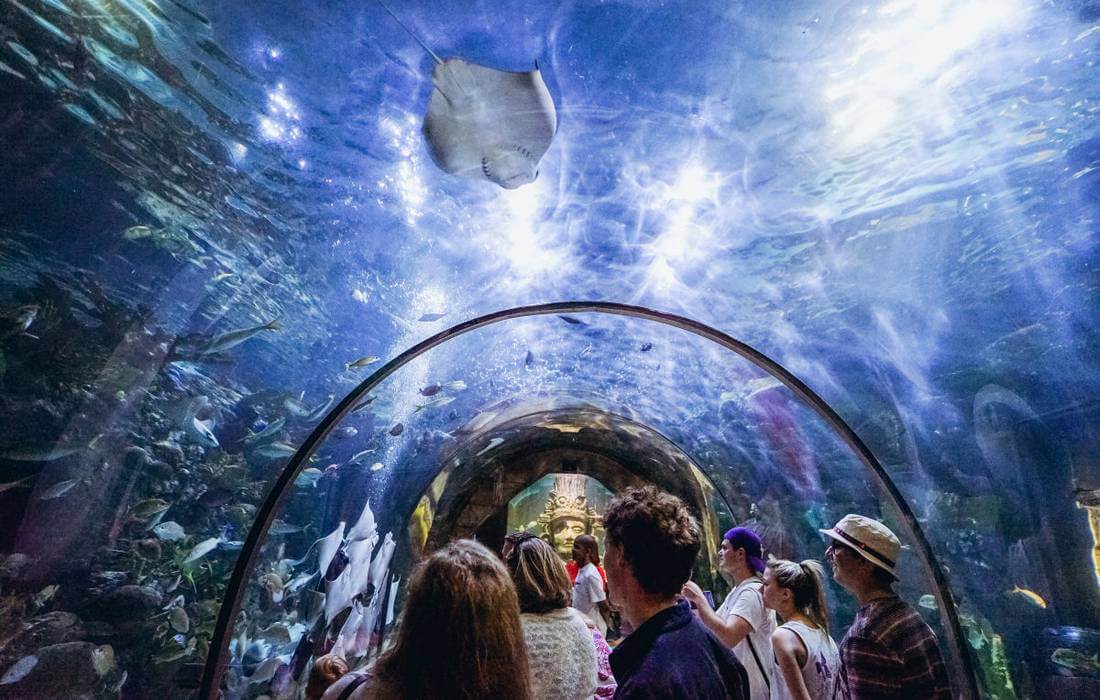 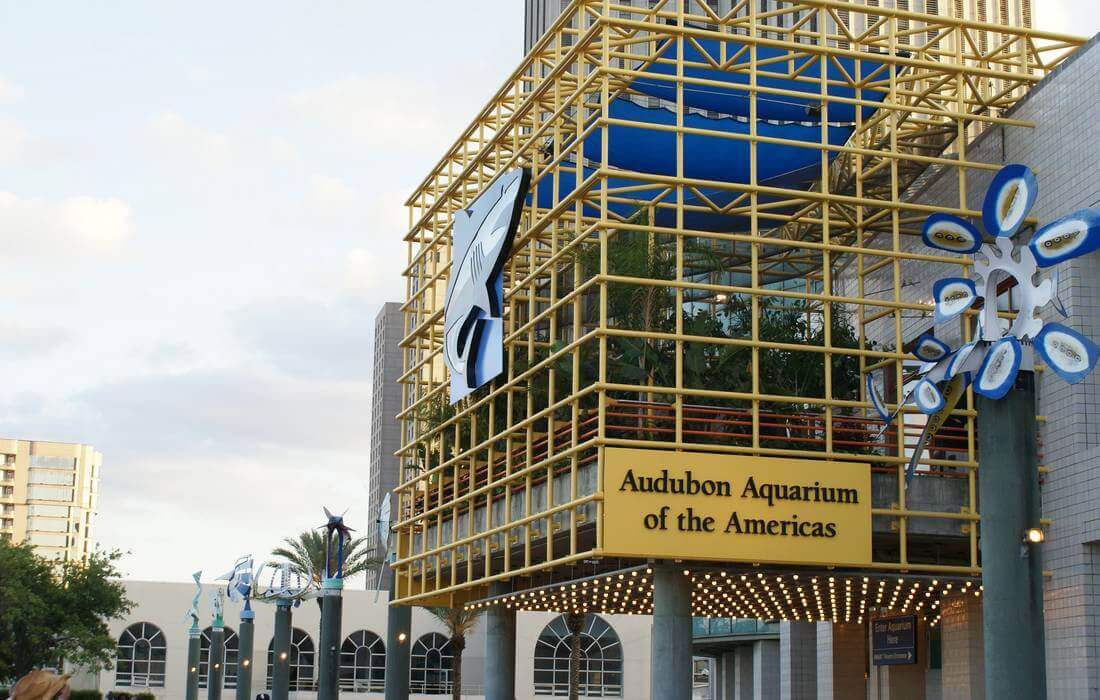 The concept of the object was developed in 1984, when the Audubon Institute of Nature began to study the idea of creating an aquarium dedicated to the “aquatic environment of Southern, Central and North America and the adjacent seas, oceans and rivers”.

In the same year, the institute staff conducted a study tour to the National Aquarium in Baltimore. The press release later announced the Institute’s intention to create "a new aquarium and Riverfront park, change the appearance of the New Orleans' embankment, raise civic pride and offer a breathtaking view of the underwater wonders of the Western Hemisphere."

AT November 1986 71 percent of Orleans parish voters approved a tax break to help fund the construction of an aquarium. An association of local architectural firms operating under the name The Bienville Group has developed the characteristic wave-like shape of the aquarium and the glass facade.

In October 1989, the Woldenberg Riverfront Park was opened to the public, and 11 months later, on the opening day of the aquarium, 13,623 visitors visited it, which broke all records. By the first days of 1991, just six months after opening, the aquarium reached its annual attendance target of 868,000 visitors.

All this has helped the aquarium grow over the past two decades.

The success of the aquarium provided support for the growth of holiday trips in New Orleans. For the first year of operation, the aquarium brought the city $171 million, and now this number has doubled.

In 2005, the aquarium encountered its first real tragedy - Hurricane Katrina. The facility was evacuated as soon as tons of water poured into the city. The fuel line feeding the aquarium generator broke down, and since there were no personnel there, no one repaired the life support system, because of this, everyone lost most of the wildlife collection.

After breaking the dam with the support and resources of the Monterey Bay Aquarium, workers evacuated the surviving animals: penguins, sea otters, giant turtles, sea horses, sea dragons and various birds and fish. They were taken away by other institutions across the country.

Over the next nine months, the staff worked to restore the aquarium population. The museum reopened on Memorial Day in 2006.

Visit Aquarium of the Americas with the American Butler agency - we will arrange for you a tour of New Orleans and its sights!
Send a request