The entire route took 301 miles, and the procession was on the street for 204 hours. And of course, after this the appearance of a museum dedicated to the festival was only a matter of time. 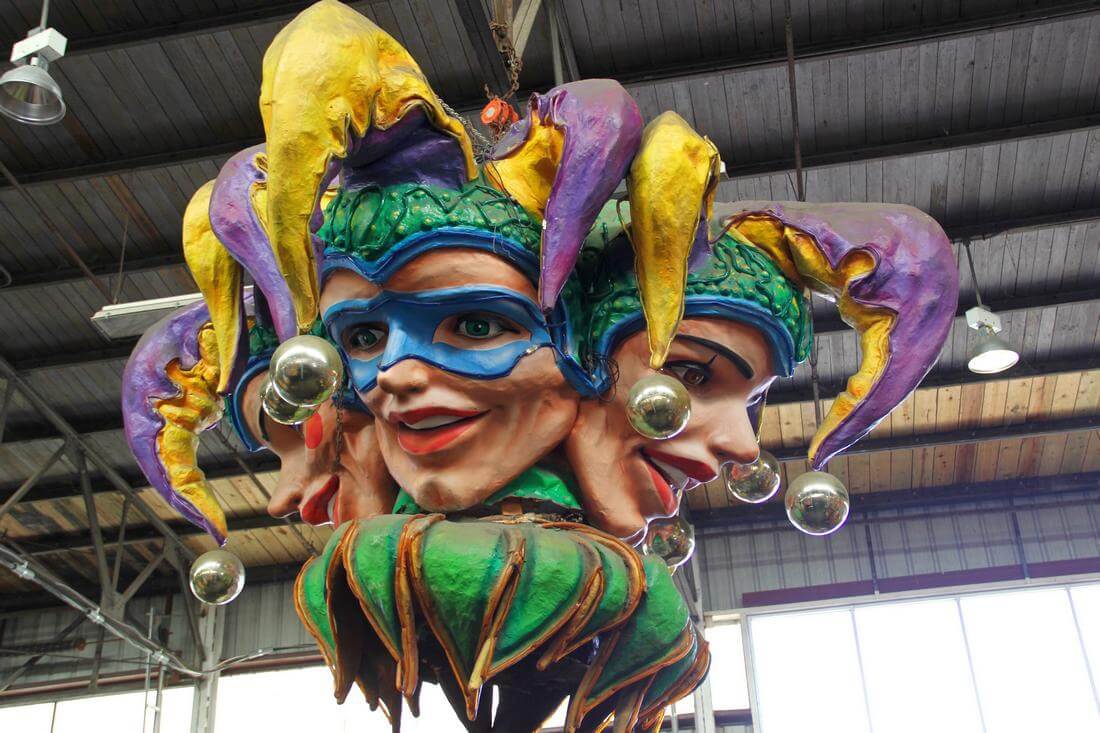 Do not miss your chance to go backstage of one of America's most famous and noisiest celebrations.

Mardi Gras World suggests looking at some of the vibrant platforms and costumes used during the famous New Orleans party.

One thing you need to know in advance: this is not a museum - this is a warehouse workshop where the carts are in the process of being completed and the old props are stored. Take a tour of the maze of props or attend a multimedia presentation to learn more about the history of the festival.

You can also watch artists who work hard to create costumes. Before the tour, visitors are invited to try on authentic outfits. After the tour, guests are treated to a slice of royal cake.

Buying a ticket also includes a free shuttle service from several points in the city center and in the French Quarter.

There is no scheduled boarding time, so you will need to call Mardi Gras World when you arrive at one of the pick-up points and the bus will meet you. 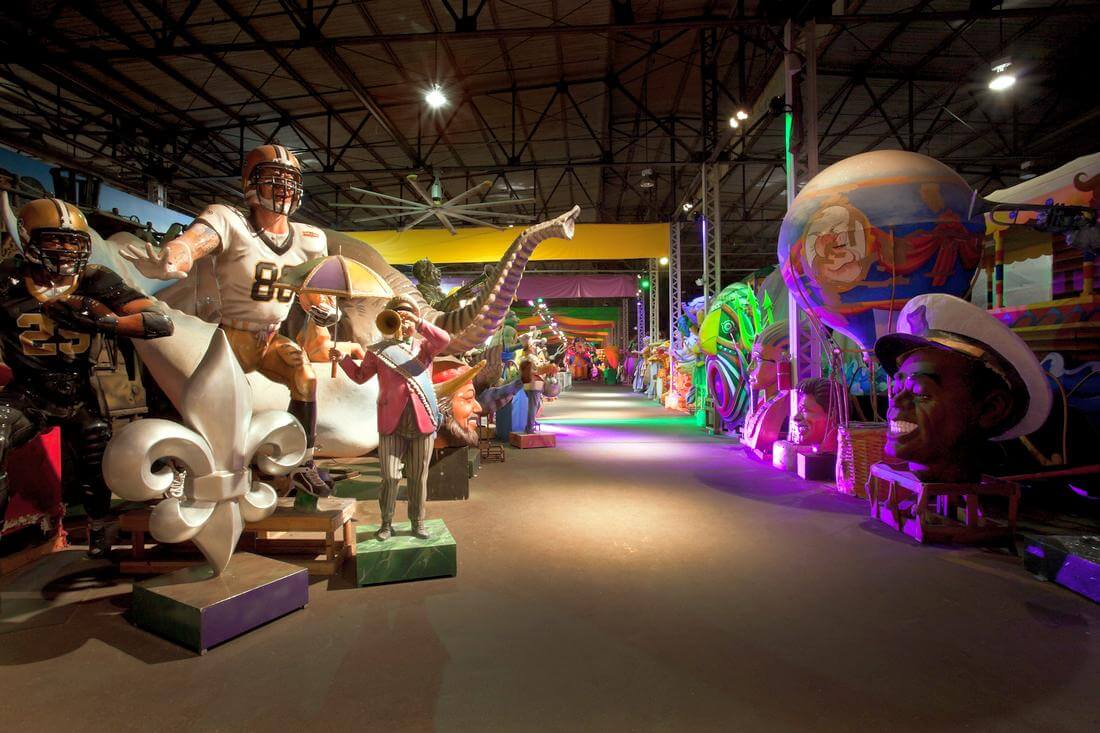 For a long time, local artist Roy Kern painted logos on cargo ships and barges, surviving the difficult times of the Great Depression. Later, he and his son Blaine built his first mobile platform for the Mardi Gras festival. 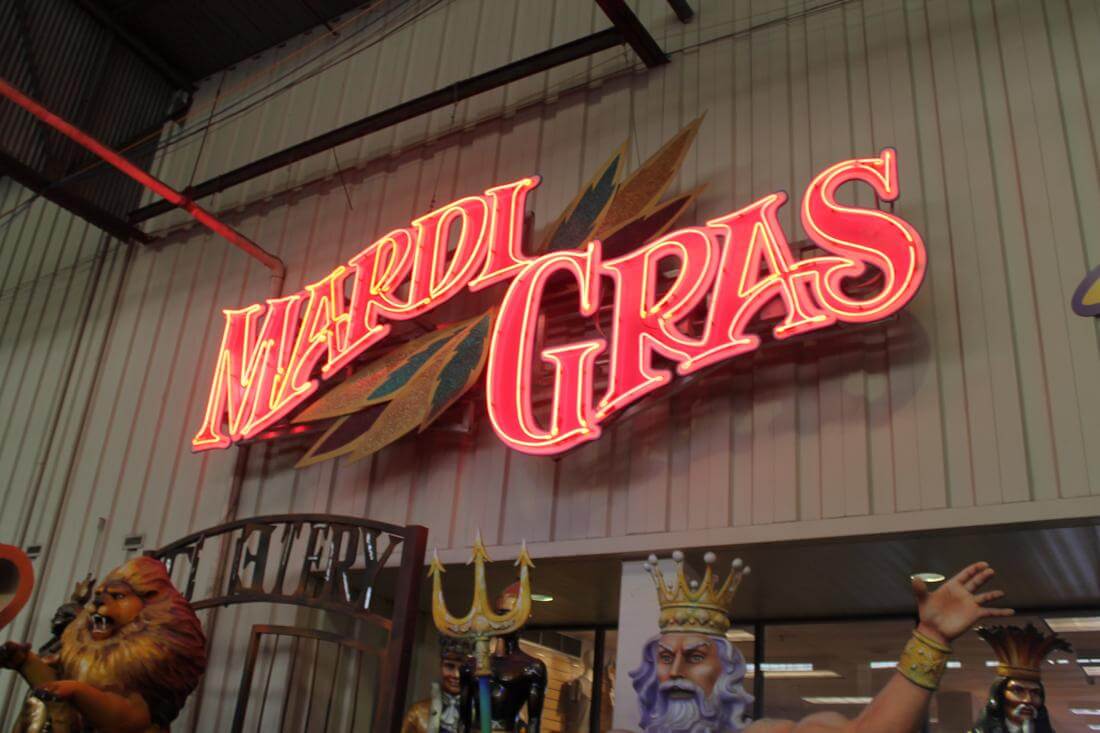 Unable to pay his mother’s medical bills, Blaine suggested painting a mural in the hospital. She caught the eye of the surgeon, who was also a regular at the Mardi Gras festival.

The surgeon invited Blaine to design and build a mobile platform for the festival. Thanks to this, the Kern studio was officially founded in 1947. One platform led to another, and soon Blaine became the lead designer of the city parade.

Blaine Kern traveled all over Europe to study with leading world masters. During several trips to Italy, France and Spain, Blaine was inspired by extravagant concepts that marked the European style of building carts.

After numerous requests from people, Kern decided to open a working studio for the public.

In 1984, Mardi Gras World was created as a tourist attraction to provide visitors with an opportunity to peek behind the scenes of work. Now this place attracts hundreds of thousands of visitors from all over the world every year.

When Hurricane Katrina hit New Orleans in 2005, Kern and Mardi Gras World suffered severe wind damage. The Red Cross and the Salvation Army used the warehouse as a base to help others who were more seriously affected. 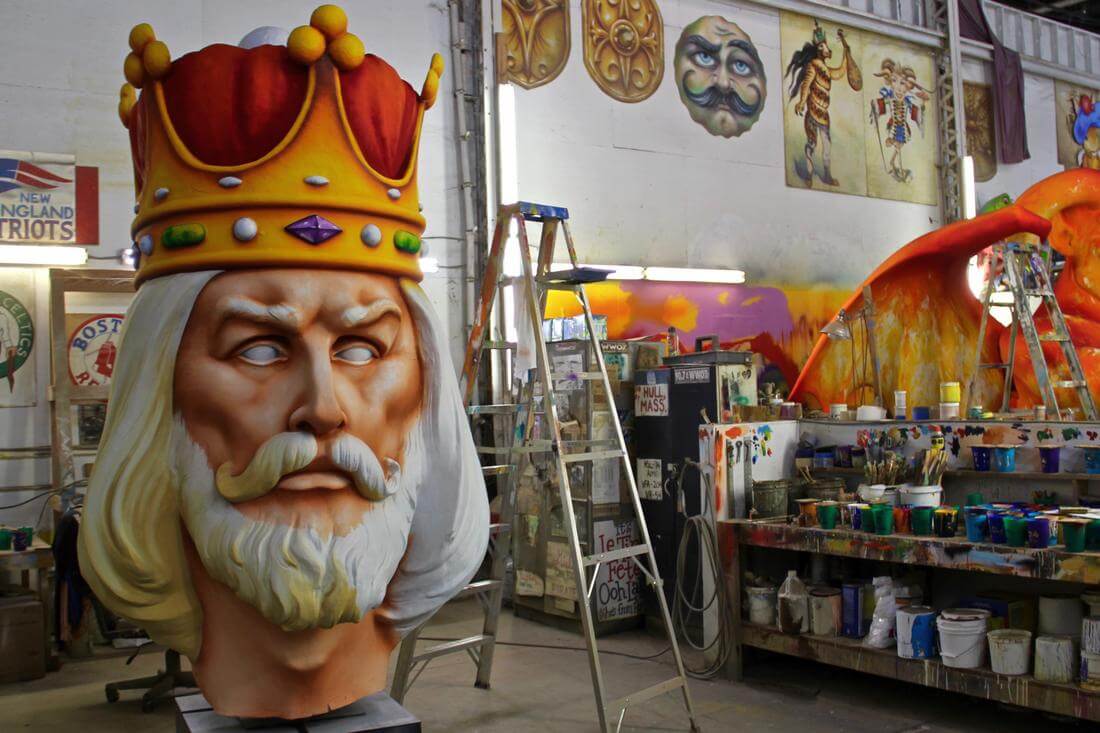 A tour of Mardi Gras World allows you to see firsthand what you need to revitalize Mardi Gras year after year. Go through the hard work of planning your holiday and head to Blaine Kern Studios, a workshop that has been creating breathtaking mobile platforms for the festival and other parades around the world since 1947.

On the tour you will be paired with a guide who will take you through a huge studio where artists and architects work. You will learn about the history of this unique holiday tradition in order to better understand the real magic of Mardi Gras.

This New Orleans tour is an unforgettable experience. There are many opportunities to take pictures in front of platforms, with props or in a traditional Mardi Gras costume, so do not forget to bring a camera with you and try a special royal pie - you rarely see it in such places.

Visit Mardi Gras World with the help of American Butler - call and book an excursion!
Send a request
Also read
New Orleans Museum of Art
The New Orleans Art Museum (NOMA) is one of the oldest institutions in the city. It seeks to preserve, represent and enrich its collections and the famous sculpture garden. Owners unite, inspire and attract… Read more
Pharmacy Museum
The New Orleans Pharmacological Museum, listed as a historic building on the National Register of Historic Places, displays its extensive collection and provides educational programs to preserve the rich… Read more
The National WWII Museum
The National WWII Museum is a military-themed museum located in the center of New Orleans. The museum is dedicated to the US contribution to the Allied victory in the Second World War. The permanent collection… Read more
Taxi in the USA
Читать еще
Real Estate in the USA
We decided to buy property in the most heavenly spot of the planet - the USA? But you doubt how to buy comfortable housing for your benefit? You need to know some nuances that will help in your decision.… Читать еще
Who is Elon Musk
Do you know who Elon Musk is, where he grew up and what does he do? What has he done useful and what plans to achieve? Read more in the article about one of the most famous entrepreneurs of our time. Читать еще
US Michelin restaurants
We continue the theme of restaurants! We take above - restaurants throughout America. And not just good, but the best of the best. So, the top 10 three-star restaurants according to the Red Michelin Guide.… Читать еще
Smoking in the USA
Smoking is the bad habit that infected the whole world from America. But modern Americans themselves are not particularly loyal to smoking. How it happened, let's try to figure it out. Читать еще
Atchafalaya Basin
The Atchafalaya Basin is the largest river swamp in the country, containing almost a million acres of bottom hardwood, marshes, flood and swampy lakes of America. The pool begins just outside Simmesport… Читать еще
Mount Charleston
The view of the snow-capped mountains seems a bit surreal when Las Vegas still feels the warmth of the desert sun. At 11,916 feet above sea level, Charleston Peak is covered in snow for more than six… Читать еще
Comic-Con International
Comic-Con is an exhibition that educates people about pop culture. The bet is on comics and related art forms. Organizers support public presentations and exhibitions on the historical contribution of… Читать еще
Mardi Gras World 5 1 0 0
Sharing: