Mardi Gras is a Christian holiday and a popular cultural phenomenon dating back thousands of years. It is celebrated in many Catholic countries the day before the beginning of the season of Lent. In New Orleans are the most famous festivities, annually attracting thousands of tourists. 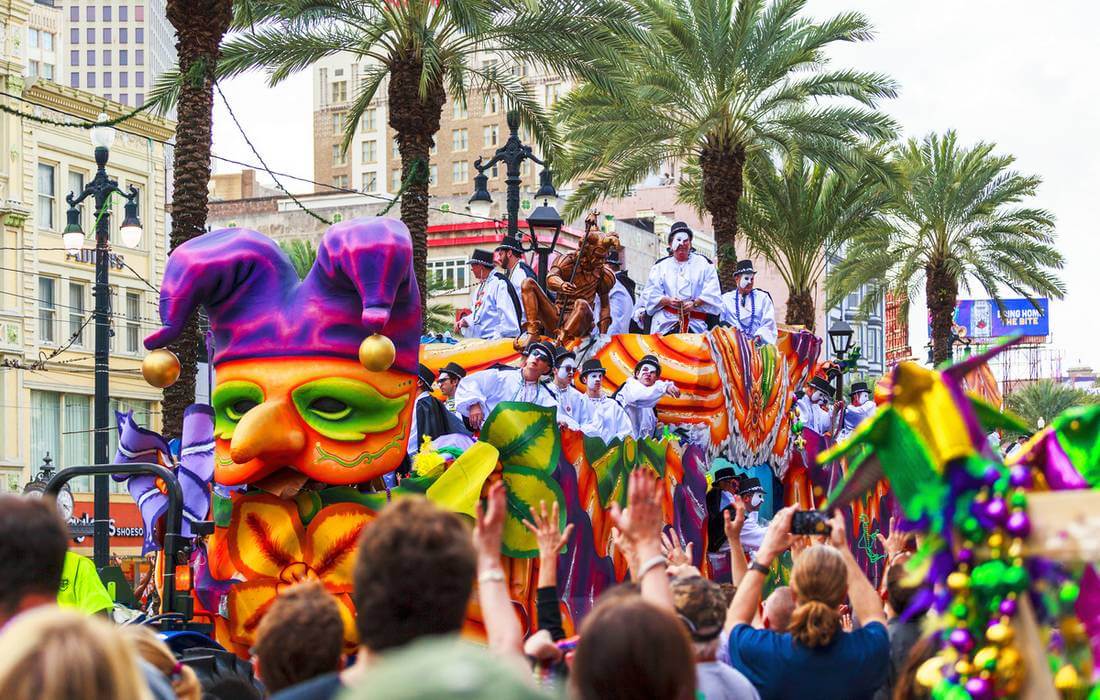 What is Mardi Gras

Mardi Gras is a tradition dating back thousands of years. Mardi is the French word for tuesday, and gra means fat. In other words, "fat Tuesday".

In the days preceding Great Lent, people used to eat all the rich, fatty foods (meat, eggs, milk, lard, cheese), accumulating energy for the next few weeks of consuming only fish and lean foods.

The word "carnival", another common name for pre-fasting holidays, also comes from this tradition of feasting: in medieval Latin, "carnelevariy" means "to take away meat."

When Christianity came to Rome, religious leaders decided to incorporate these customs into the new faith, which was an easier task than their complete abolition.

As a result, Mardi Gras became the prelude to Lent, 40 days of fasting and repentance between the ashes of Wednesday and Easter Sunday.

Currently it is one of the most important carnivals in the United States, which collects several hundred thousand annually. 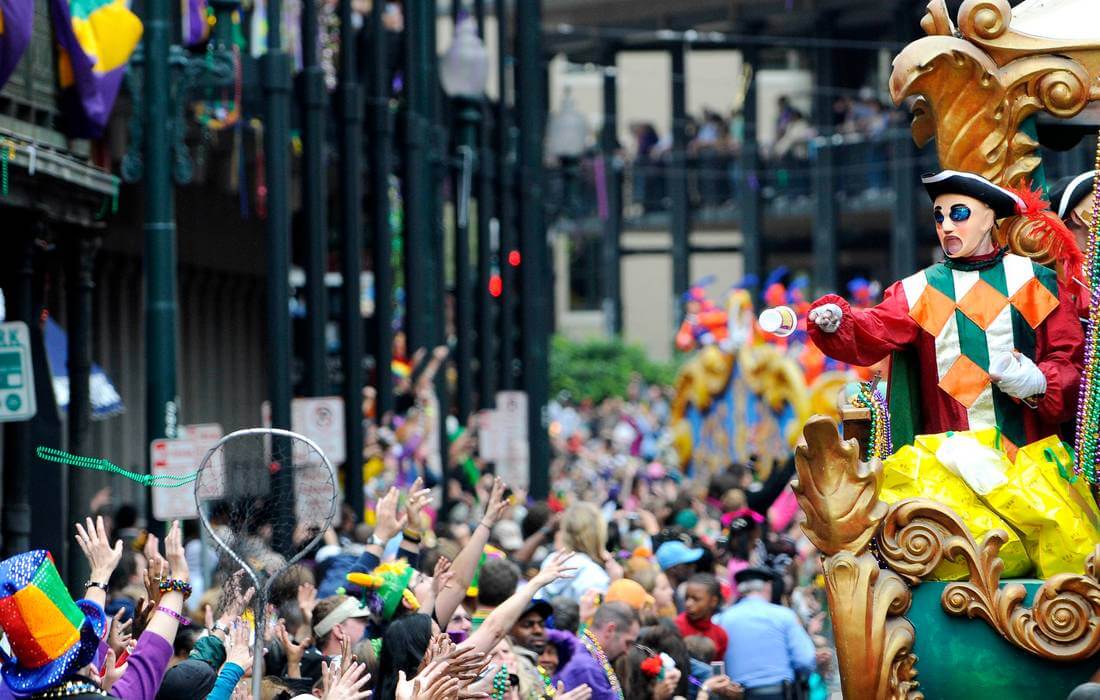 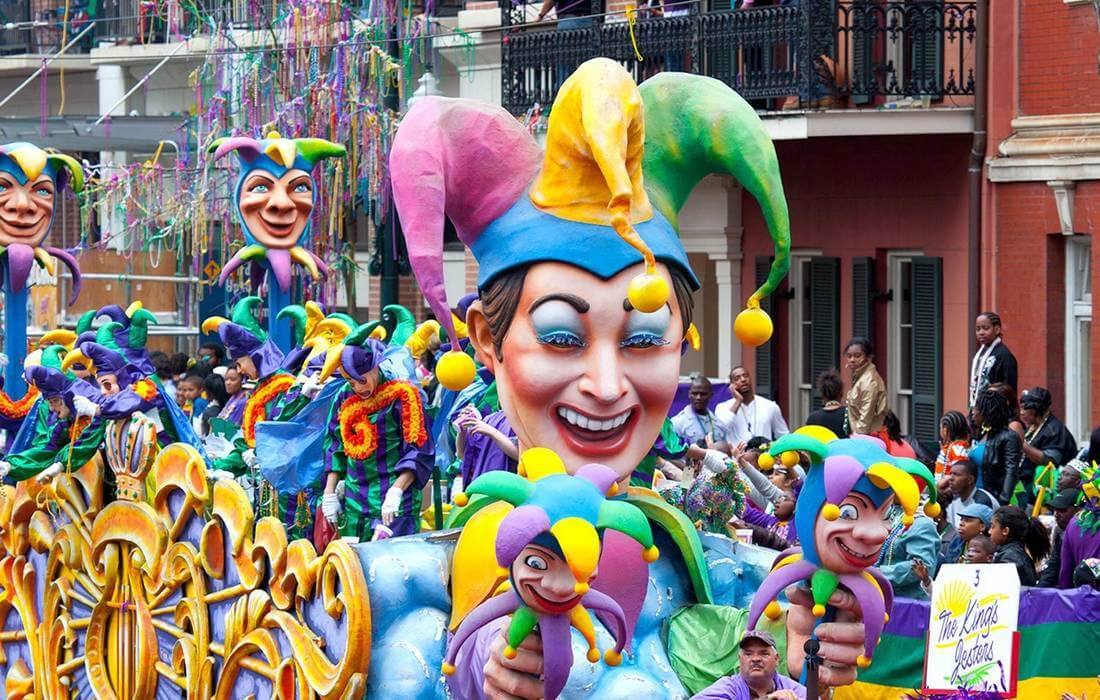 In the following decades, New Orleans and other French settlements began to celebrate the holiday with street parties, masked balls, and sumptuous dinners. However, when the Spaniards took control of New Orleans, they abolished these noisy rituals, and the prohibitions remained in force until Louisiana became a US state in 1812.

In 1827, a group of young people donned colorful costumes and danced through the streets of New Orleans, imitating the fun they saw while visiting Paris . Ten years later, the first recorded Mardi Gras parade took place. This tradition continues to this day.

At 1857 A secret society of businessmen from New Orleans called Mystic Crewe of Comus organized a Mardi Gras procession with marching orchestras and mobile platforms, setting the tone for future public celebrations in the city.

Since then, platforms and carts have remained an integral part of the carnival throughout Louisiana. Other custom includes throwing beads and other trinkets, wearing masks, painting platforms in motley colors and eating royal pie.

Visit the Mardi Gras Festival in New Orleans with American Butler - call!
Send a request
Also read
How to organize a rest in Miami
Always dreamed of visiting Miami, but consider that it is too expensive and unattainable? In fact, a trip to this wonderful city can be arranged without the help of travel agencies and intermediaries.… Читать еще
Buying a home in Miami
Читать еще
Al Capone Story
The world is full of atrocities at all times, but the 20s years of the 20th century became the most cruel and riotous for America. But the times of Prohibition and the Great Depression turned out to be… Читать еще
Italian restaurants in Miami
Florida's best trattorias elevate the spiritual simplicity of the kitchen to unattainable heights and help visitors to appreciate the authentic flavors of the country's characteristic culinary regions.… Читать еще
Hoover Dam
Hoover Dam is one of the highest dams in the world, and at the same time a powerful hydroelectric power station. Tourists and residents come here to see the incredible scale of construction, go boating,… Читать еще
Craft Contemporary
Craft Contemporary is a building with more than half a century of history, a gallery of folk art. Since Los Angeles has become an important international art center, the Museum of Crafts and Folk Art… Читать еще
Mardi Gras 5 1 0 0
Sharing: