The Miami Seaquarium Amusement Park is an environmental education center located right after the descent from the Rickenbacker Causeway Highway towards Key Bickeyn Island. 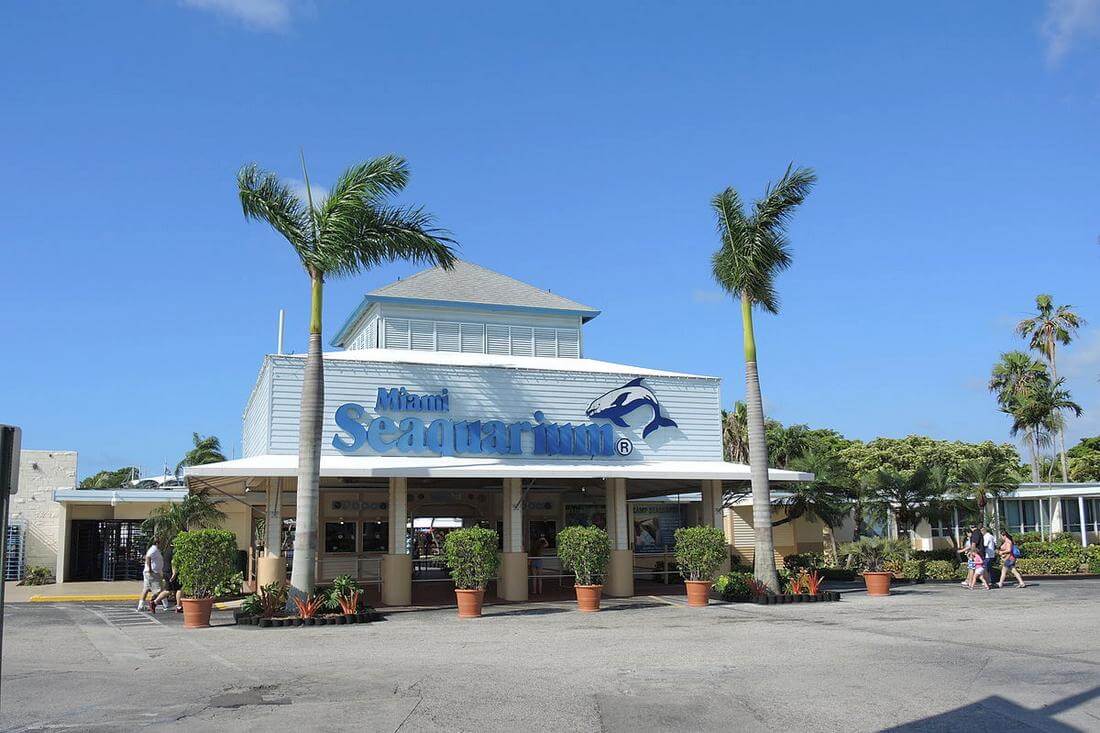 Miami Seaquarium is one of the reasons why millions of tourists prefer to visit the United States. Here is a real paradise for an inquisitive nature. Just imagine meeting real sharks in the Shark Channel sector, get acquainted with the beautiful macaw parrot on Upper Island, which can speak.

Also take a look at the crocodile in the Discovery Bay sector, whose weight is at least a ton. In addition, each visitor can feel the kiss of the dolphin and shake the fin for a new friend, as well as have a good laugh at the fun show of the rangers led by the sea lion Solty.

Miami Aquarium — it is an aquarium and a rather favorite place not only for tourist attention, but also just for family vacations. Exotic water archipelago, whose capacity is almost 3 million liters, contains a lot of large and small fish, including moray eels and giant stingrays.

The Miami Aquarium is an indispensable stopover for family fun. The activities described above are the smallest part of what you can expect from these scenic spots. Imagine that it was here that the legendary film about the friendship of a boy with a killer whale Flipper was shot.

This favorite character still lives in the local harbor and is ready to impress the audience with his dizzying tricks and pirouettes.

History of the Seaquarium 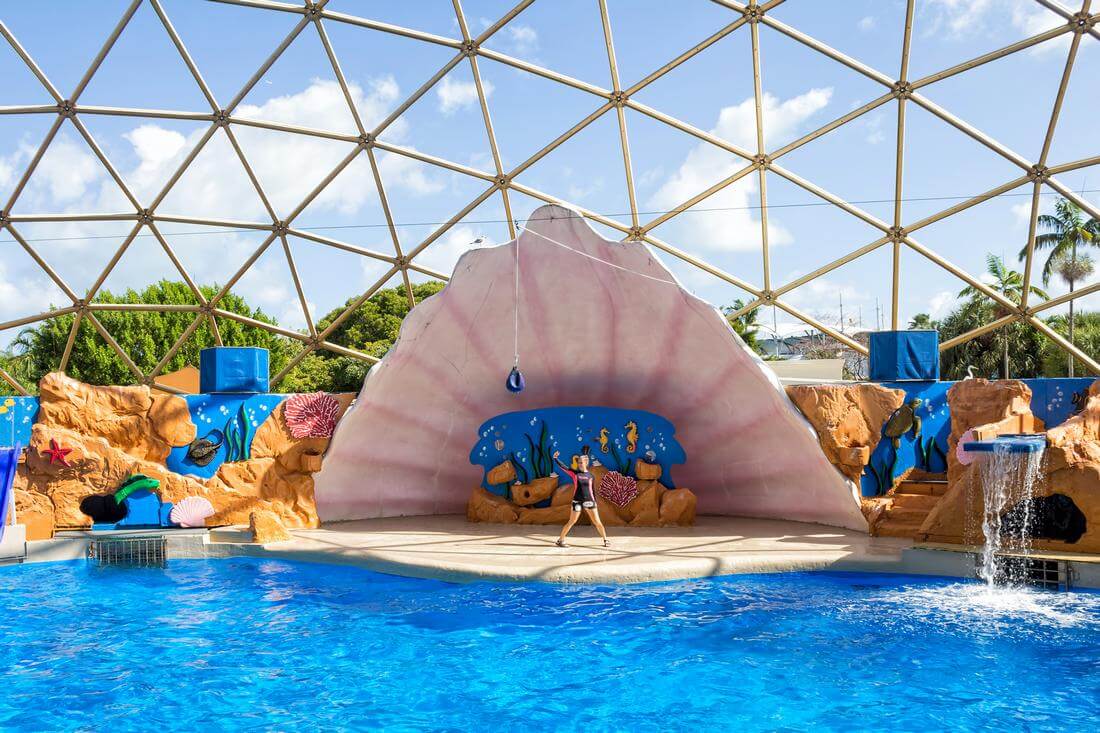 The fundamental opening of the park took place in 1955, which was built over 14 years. Thousands of people participated in the grand opening ceremony, which was headed by the chairman of the district, solemnly pouring the water of seven washing seas into the territorial basin. At that time, the Miami Seaquarium was the largest water amusement park in the world.

The dolphin show has become the hallmark of a large-scale park, where since its inception many new bright actors of colorful shows on the water were born. Guests truly open their mouths to see the incredible stunts these dolphins perform. The very first female dolphin was Bebe. She was an old-timer and was able to live 40 years, having given birth to a new talented offspring.

Already in the 60s, Miami Seaquarium started talking around the world. After all, it was then that Flipper was born. The legendary film consisted of about 88 episodes and two full-length films, where a ranger named Porter Rick, along with his sons, became the main characters of this epic. All the actors in the film are in good health and are ready to meet you at the aquarium to swim together!

An equally remarkable event for the aquarium is the birth in captivity of the first manatee. It happened in 1975. In the same year, the sea lion Solti appeared in the park, the population of individuals of which was endangered. We can say that from that moment on, the Miami Aquarium can be considered the "ark" to save many species of animals.

This center was able to accommodate many marine inhabitants and each time expands its borders. Currently, the park is a visited place where over 500,000 people witness fascinating flora and fauna. 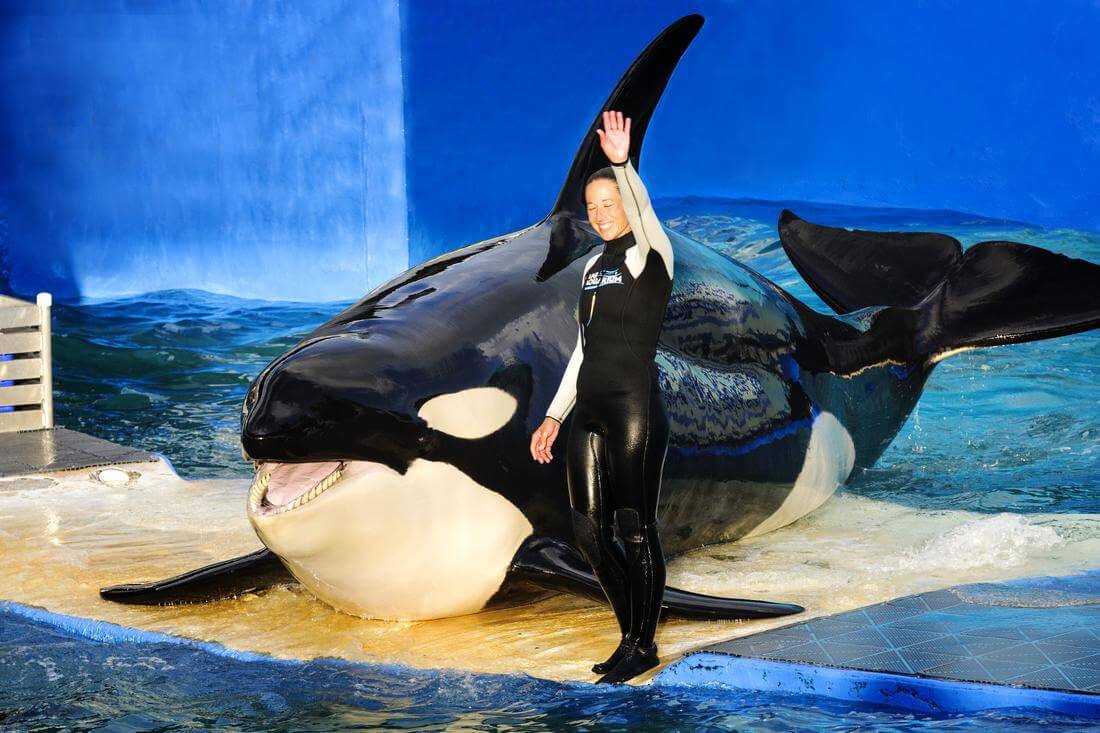 A variety of shows are held here daily: 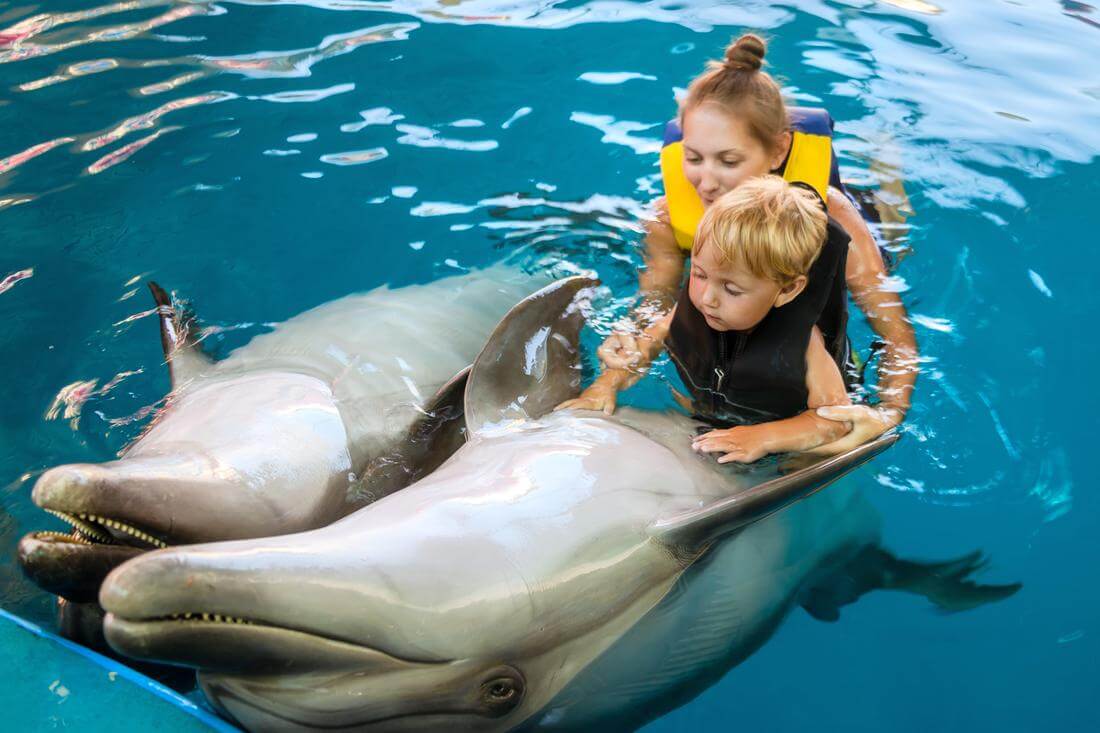 If we take into account large-scale measures to save endangered species of mammals, then most of them are carried out in the oceanarium. Now it is not just a place for attractions and daily shows for people, but also a real home for many species of the animal world.

The center, organized on the basis of the aquarium, is of global importance. His group includes a whole alliance of parks, which with their presence are aimed at replenishing the population of manatees, sea turtles and many other animals. Here the animals receive professional care, and their environment of scrubbing is as close as possible to the necessary criteria, where the mammals will feel absolutely safe. Even the smallest manatee could survive in captivity and go to their relatives for the redistribution of the park. And what can we say about the numerous species of injured animals, for example, turtles, which are undergoing rehabilitation and sent to freedom in good health.

Each visitor, imbued with a desire to help animals, can do this by making his own material contribution to the development of various Miami Seaquarium programs. The oceanarium offers not only to enjoy watching how stingrays, seals, alligators, sharks and other animals live, but also to take a direct part in their feeding.

According to statistics, this place is the second most popular for tourists and residents of the United States after Disneyland.

The Miami Oceanarium provides an opportunity every day to take part in a show program with marine inhabitants, which can not be seen anywhere else.

Miami SeaQuarium is an informative world of underwater inhabitants and a place for a perfect vacation for any visitor, and, probably, the best oceanarium in the USA. Do not miss the opportunity to witness this incredible park with your own eyes. And, of course, do not forget to swim with the dolphins, having received great pleasure from talking with these amazing animals, which pull their fins and seek to really kiss you.

Book a trip to the Miami Aquarium with American Butler.

You will love this adventure!
Book a tour
Also read
Miami Zoo
Miami Zoo, also known as Miami MetroZoo and The Miami-Dade Zoological Park and Gardens, is one of the most interesting parks in the world. This is the largest zoological park in Florida and the only menagerie… Read more
Butterfly World
The Butterfly World is a park in the suburbs of Miami and an exquisite resting place among hummingbirds, huge fluttering flowers and amazing plants. In addition to 20,000 species of butterflies, their… Read more
Flamingo Gardens
Flamingo Gardens Fort Lauderdale covers a vast territory of about 25 hectares. A colossal population of amazing pink flamingos constantly lives on the territory of the Flamingo Gardens park. In addition… Read more
Jungle Island
Miami's Jungle Island Zoo is a terrific amusement park located on an island in Miami between downtown and South Beach. The most striking sights of the Jungle Island Park are feline. Luxurious tigers,… Read more
How to organize a rest in Miami
Always dreamed of visiting Miami, but consider that it is too expensive and unattainable? In fact, a trip to this wonderful city can be arranged without the help of travel agencies and intermediaries.… Читать еще
How to get a mortgage in the US
Planning to buy property in the US, but you do not have enough money to buy a long-awaited home? You can ask for a mortgage loan in one of the US banks. In order to know all the conditions and rates,… Читать еще
Al Capone Story
The world is full of atrocities at all times, but the 20s years of the 20th century became the most cruel and riotous for America. But the times of Prohibition and the Great Depression turned out to be… Читать еще
Miami Design District Dining
After decades of decline, Design District has gained fame as a place for art, design and fashion. There are more than 130 art galleries, exhibition halls, creative services, architectural firms, luxury… Читать еще
Hoover Dam
Hoover Dam is one of the highest dams in the world, and at the same time a powerful hydroelectric power station. Tourists and residents come here to see the incredible scale of construction, go boating,… Читать еще
Craft Contemporary
Craft Contemporary is a building with more than half a century of history, a gallery of folk art. Since Los Angeles has become an important international art center, the Museum of Crafts and Folk Art… Читать еще
Miami SeaQuarium 5 1 0 0
Sharing: