Stiltsville is an unusual village in Miami

The mysterious village of Stiltsville, which rests on stilts in the ocean just half a mile from the Florida Lighthouse, cannot be called a Miami calling card. But although not only many travelers, but the indigenous Mayamians are unaware of its existence, the remaining houses on stilts in Biscayne Bay keep many mysteries and legends. 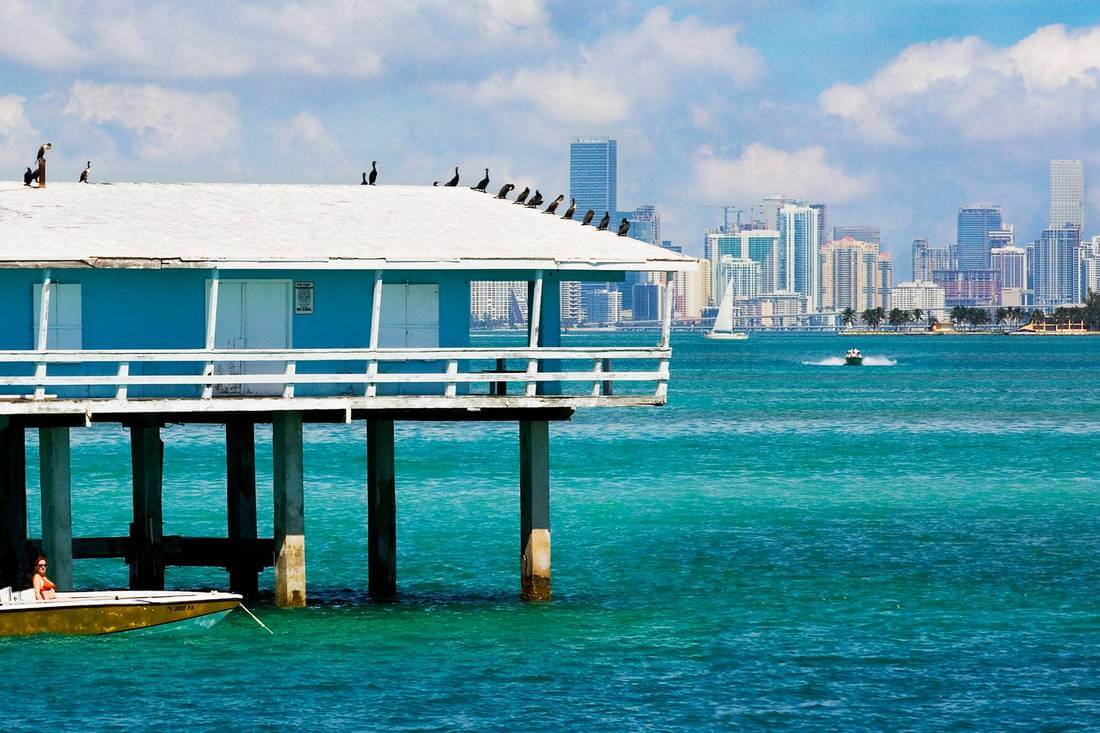 The story of Stiltsville

Eddie Walker (Eddie Cancer), the founder of the village of Stiltsville, immigrated to Miami from Key West in 1907, first built his house here in the early 1930s. Walker earned by selling fish bait, as well as beer and soup, for which he caught crayfish right under his house. There are legends about his wonderful soup.

Eyewitnesses also recalled that the almost blind crabber Eddie Walker, and he was 67 years old at that time, although he barely walked the earth, knew all the ocean shoals and predicted the weather better than any meteorologist. Walker did not intend to wait for the repeal of Prohibition, so very soon his shack became a kind of gambling establishment.

Gradually, other houses on stilts began to be built around Walker's shacks. People appreciated the opportunities that have appeared in their secluded, but stunningly beautiful dwellings. In 1950, Hurricane King destroyed the house of Eddie, but by that time in the village had already appeared even solid clubs. The first club Calvert, built back in 1929, existed for 9 years.

By 1940, non-residential buildings began to appear, among them - the club on the barge Quarterdeck Commodore Edwin Turner. The club was so popular that it was even visited by Hollywood stars and famous world politicians to play games of chance and exchange fresh news.

Unfortunately, the authorities in Florida constantly tried to ban gambling, which prevented the villagers from infringing on fierce hurricanes. As a result, unknown perpetrators in 1961 burned Quarterdek. The last owner Karl Mongelutstso wanted to rebuild the club again, but could not get permission for this. 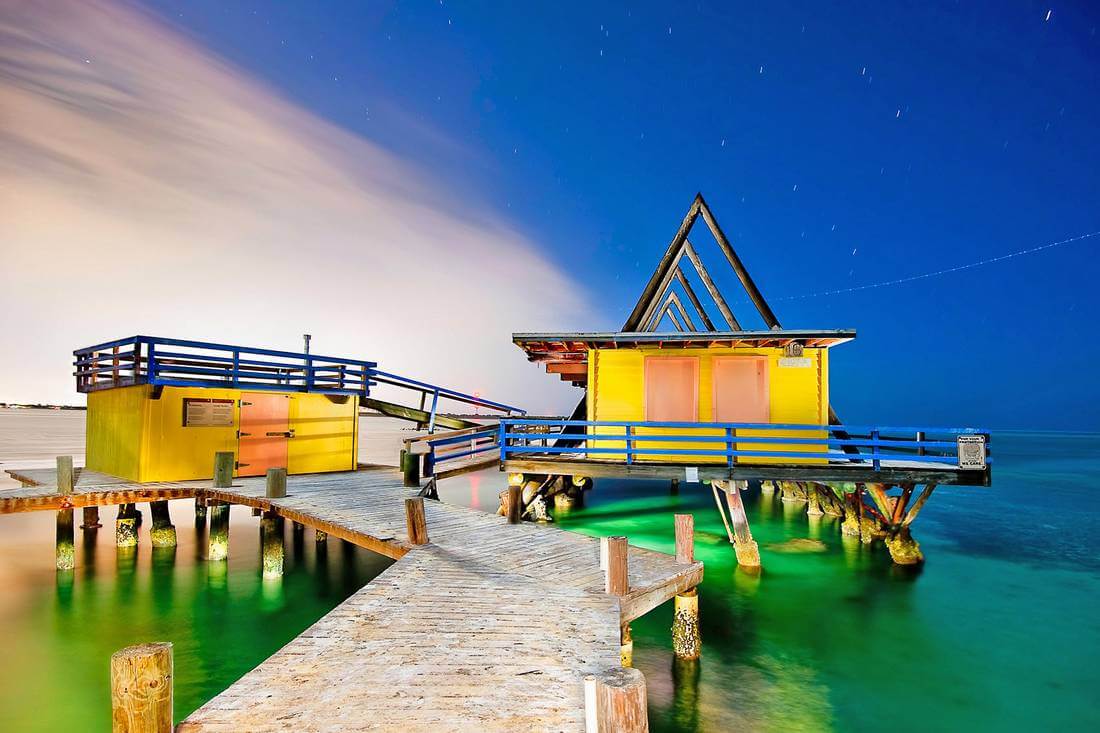 The heyday of Stiltsville

Over the next few decades, Stiltsville was a favorite place of influential politicians, bankers and other wealthy people who gathered in the ocean village with smugglers and players to drink, have fun, play gambling and who knows what else to do. 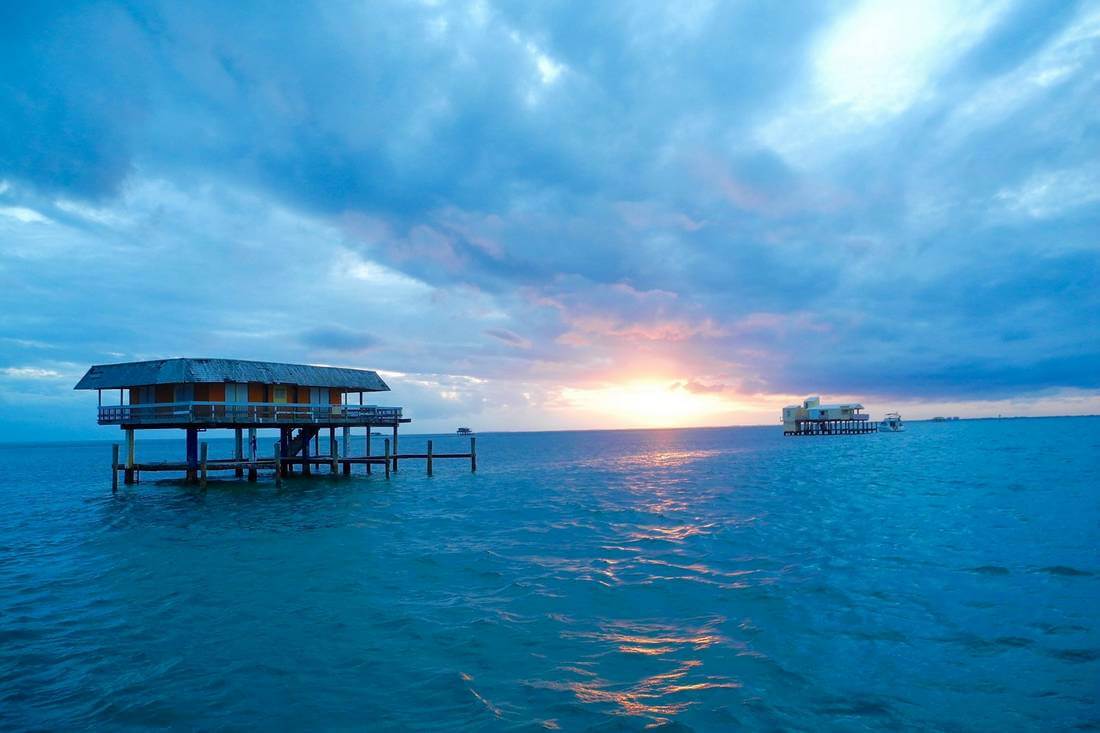 Florida Governor Leroy Collins was a frequent visitor to the village in the 1950s, and Teddy Kennedy (then still a bachelor), later organized a legendary party there with his friends, as a result of which one of the shacks almost flew off from their piles.

The village of Stiltsville often turned out to be the strongest of all the forces of nature, and during the zenith period of the 1960s there were almost 30 houses. For decades, several clubs and ersatz casinos operated in Stiltsville, and one of the improvised pleasure houses accepted only women in bikinis and sunbathing men as members. The Bikini Club was founded by local fraudster Harry Churchville (Pierre), who in 1962 founded a 150-foot yacht on mud beams selling moonshine, and bikini ladies were offered free drinks.

Soon there were brave souls who sunbathed on the decks in the nude. This was enough to cause discontent and suspicion of the authorities, and three years later the bikini club was closed for selling alcoholic beverages without a license and catching crayfish out of season.

By that time, people from the mainland began to complain about what was happening, claiming that the houses on stilts prevented them from admiring the beauty of the ocean. The weather also did not contribute to the preservation of the village on stilts, and in 1965 another house was destroyed by a hurricane, except for 17. All requests for the construction or reconstruction of destroyed houses were rejected.

Of course, the village in the ocean had its supporters: the judge of the district court Frank Nack built himself a house on stilts, but this did not help the cause. 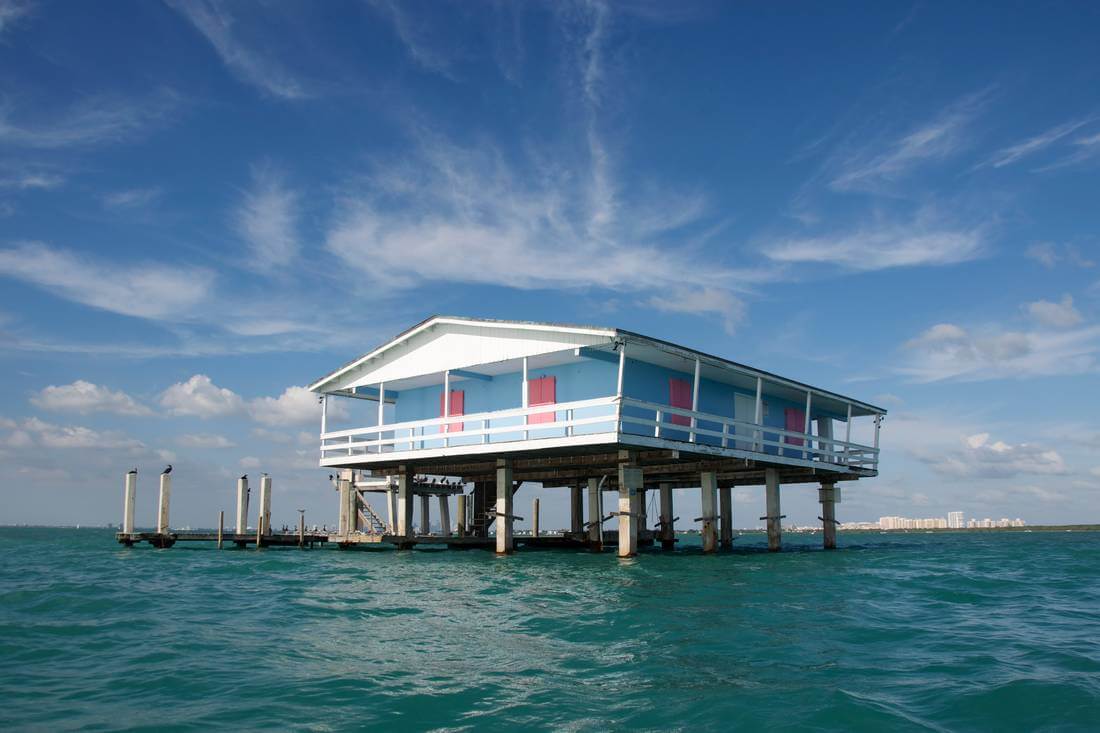 After another devastating hurricane Endy on August 24, 1992, only 14 shacks remained in the village. In the same year, another of the houses collapsed after about 150 revelers danced there during a shower. 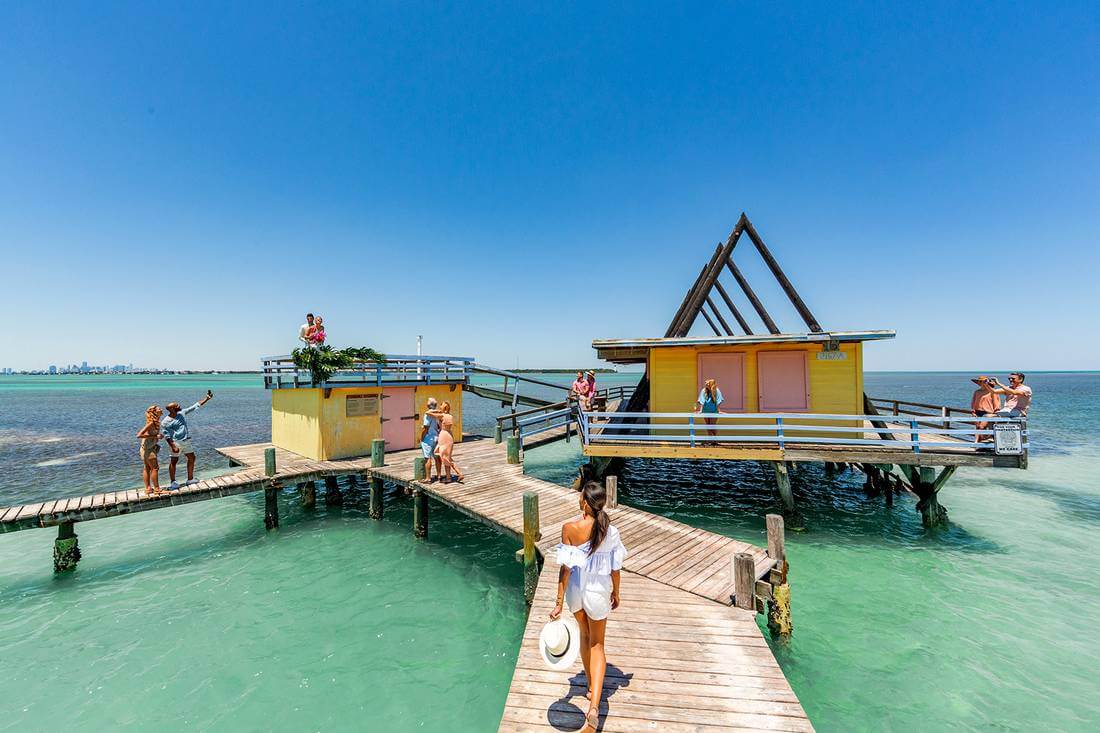 The uniqueness of the village of Stiltsville served as the basis for the novels:

The village was also captured in the films:

More recently, an art museum was organized on the site of Stiltsville, which was awarded an award by the architects of Herzog&de Meuron after Swiss partners, while traveling in Miami, first discovered a tiny village in the ocean, riding boating

Currently, there are only 7 houses that are protected by a specially organized company Stiltsvill Trust, and for public events only 1 or 2 houses are open.

The enduring charm of Stiltsville is much more than just the memory of old Florida, so the state community is doing everything to preserve this fading island of history.

How to visit a village on Stiltsville stilts?

Contact American Butler - experienced specialists will help to organize the tour at the most convenient time for you, taking care of the organization of your leisure time. Employees of the company are looking for not only new, unusual sights in the United States, but also study the way of thinking of Americans. Thanks to this approach, you will see all the most interesting in every corner of America, as well as you can relax in the best restaurants and together with our guide make an exciting tour of the night clubs of Miami.

Memories of such a unique and mysterious phenomenon as a village on Stiltsville piles will accompany you all your life!

Book an excursion to the village of Stiltsville - you will be satisfied!
Send a request
Miami
What to see
Districts
Museums
Theatres
Zoos
Parks and reserves
Festivals and exhibitions
Health and Sport
Shopping
Restaurants
Nightclubs
Casino