Miami-Dade County Courthouse is located at 73 West Flagler Street. Construction began in 1925 and was completed in 1928.

Just at that time, a colossal skyscraper was built with a lighthouse on the roof on Biscayne Boulevard, which is now called Freedom Tower — 17 floors, elegant architecture, height 78 meters, including a lighthouse that floods Biscayne Bay at night with light.

The history of the appearance of the district court in Miami 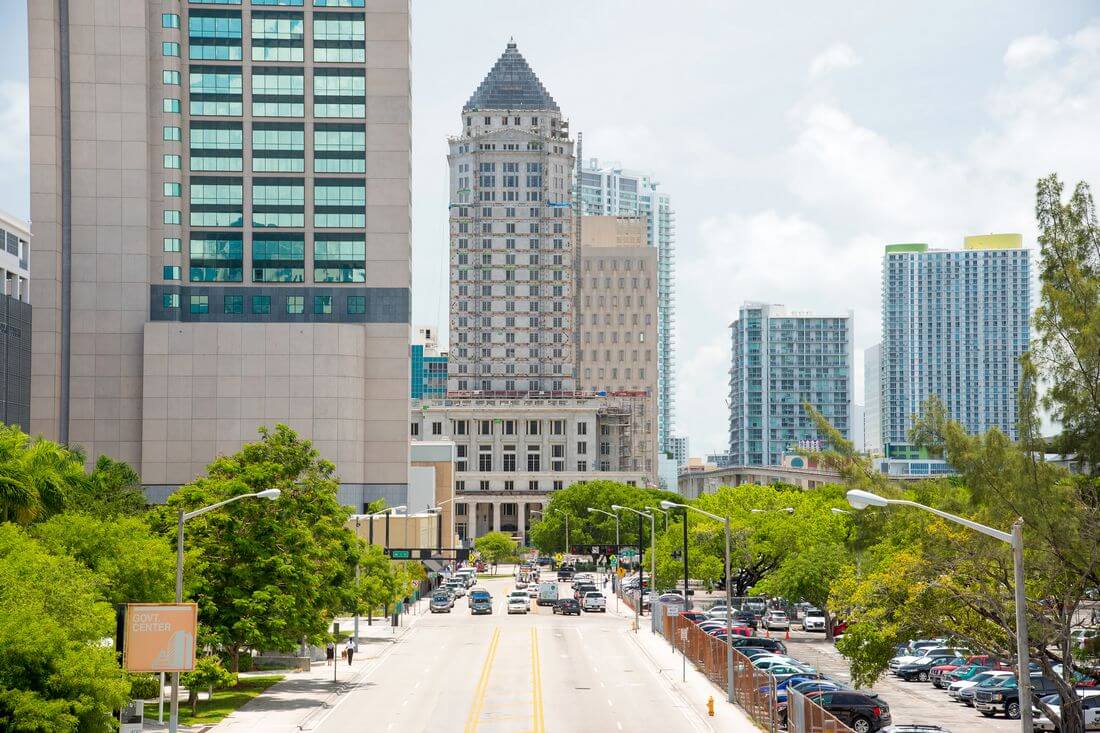 The construction of the District Court building in Miami was a kind of response to the appearance of the first real skyscraper using modern technology that allows the rapid construction of colossal and durable structures. The height of the new most important skyscraper in Miami and Florida as a whole was 110 meters and 28 floors.

Miami-Dade Courthouse is still being used as intended, as a central civil court. In fact, it is extremely interesting to look at the colossal buildings built about a century ago. It was at this time that a special American style was formed in architecture and design. European neoclassicism was diluted with elegant Italian baroque and increased by all dimensions several times.

Architect Miami-Dade County Courthouse A. Ten Eyck Brown laid the foundation for the construction of his administrative building project in Atlanta. The redone project was approved and approved. The new building began to be built right around the old one, followed by the demolition of the old courthouse. But when the builders raised 10 floors already, it turned out that the geodetic works were not carried out with due care and the future Miami Courthouse was gradually sinking into loose soil. Engineers turned for help to specialists from Mexico who had experience in solving such problems during the construction of the Opera House.

The pile foundation had to be further strengthened with cement, which occupies a significant part of the Miami-Dade County Courthouse basement to this day. Nevertheless, the building was completed and quite successfully - for almost 100 years, the District Court building in Miami has been towering on Flagler Street.

The construction of the Miami courthouse cost more than $4 million at 1928 prices. This is about $60 million for modern money.

Initially, court hearings were held here and there were cells of pre-trial detention. The cameras were located on the upper floors. It was assumed that it was impossible to escape from such a height. But a series of high-profile shoots from Miami-Dade County Courthouse denied this claim. Prisoners escaped using a fire hose and other ingenious devices. In total, more than 70 shoots were recorded.

The Miami Dade County Courthouse, in addition to its impressive appearance, has a rich and interesting history. You can look at the high windows and try to understand how the prisoners managed to escape from the prison - a skyscraper. You can admire the engineers who managed to erect a colossal structure 100 years ago in difficult geodetic conditions.

And with your own eyes you will see the District Court building with the help of the American Butler on a sightseeing tour of Miami.

We are waiting for your applications!
Send a request
Also read
Stiltsville
The mysterious village of Stiltsville, which rests on stilts in the ocean just half a mile from the Florida Lighthouse, cannot be called a Miami calling card. But although not only many travelers, but… Read more
Miami Circle at Brickell Point
The Miami Circle at Brickell Point is a historical monument in Miami that is of great national importance in US history. The Miami Circle with a diameter of 11.5 m, containing 24 large holes and many… Read more
Torch of Friendship
The Torch of Friendship is a monument of a rounded wall and a high-raised torch, like an Olympic one, located in the very center of Miami in Bayside Park on Biscayne Boulevard. Read more
Deering Estate at Cutler
Deering Estate at Cutler is a nature reserve that will surprise even the most demanding traveler. One of the most memorable historical places in the USA is located in Miami. Here, each visitor learns… Read more
Boardwalks in the USA
Читать еще
Buying a home in Miami
Читать еще
Mark Zuckerberg
Читать еще
American cuisine
Who said that apart from fast food in America, there is nothing to eat? All this is bullshit, American cuisine - the most diverse, nutritious and interesting in the world! One name for the tex-mex direction… Читать еще
Hoover Dam
Hoover Dam is one of the highest dams in the world, and at the same time a powerful hydroelectric power station. Tourists and residents come here to see the incredible scale of construction, go boating,… Читать еще
Craft Contemporary
Craft Contemporary is a building with more than half a century of history, a gallery of folk art. Since Los Angeles has become an important international art center, the Museum of Crafts and Folk Art… Читать еще
Miami-Dade County Courthouse 5 1 0 0
Sharing: