The Coconut Grove area in Miami are morning jogging, evening walks, the view from the window and the French bakery next door - the place of residence introduces the new city as a good guide. Wherever you wish to live - in a modern penthouse, cottage with a Creole balcony or on a yacht - American Butler will find you an ideal option in any city of sunny Florida .

Coconut Grove is the name for the charming coastal region of Miami Coconut Grove. This name is consonant with the Russian word "cocoon", which successfully conveys the atmosphere of comfort of its streets. 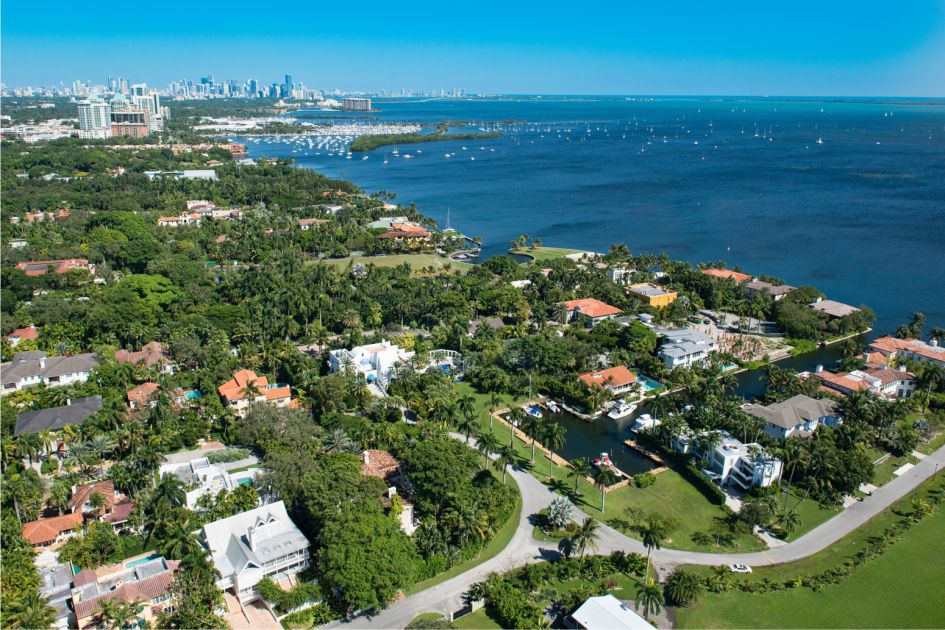 Once the inhabitants of the Bahamas settled here, who decided to try their luck on the mainland. In the early twentieth century, they were replaced by wealthy Americans, eager for eternal summer and the sea breeze. In the 60s, Coconut Grove was chosen by bohemians: artists, musicians, hippies and lovers of free life. Since then, in this toy town, there is a spirit of relaxation and pleasure from simple joys.

It is not easy to become a lark for a born owl, but the effort spent will be more than repaid if you meet the dawn on the sailboat of Dinner Key bay or the Peacock park embankment. On the way, you can meet a family of peacocks - they feel great here.

Bike and walking will allow you to get to the sights of the compact town and at the same time get acquainted with its streets with an abundance of cafes, markets, souvenir and antique shops. By the way, the area is different from the sweeping Miami precisely because of its chamber nature, everything here is small, cozy and puppet. 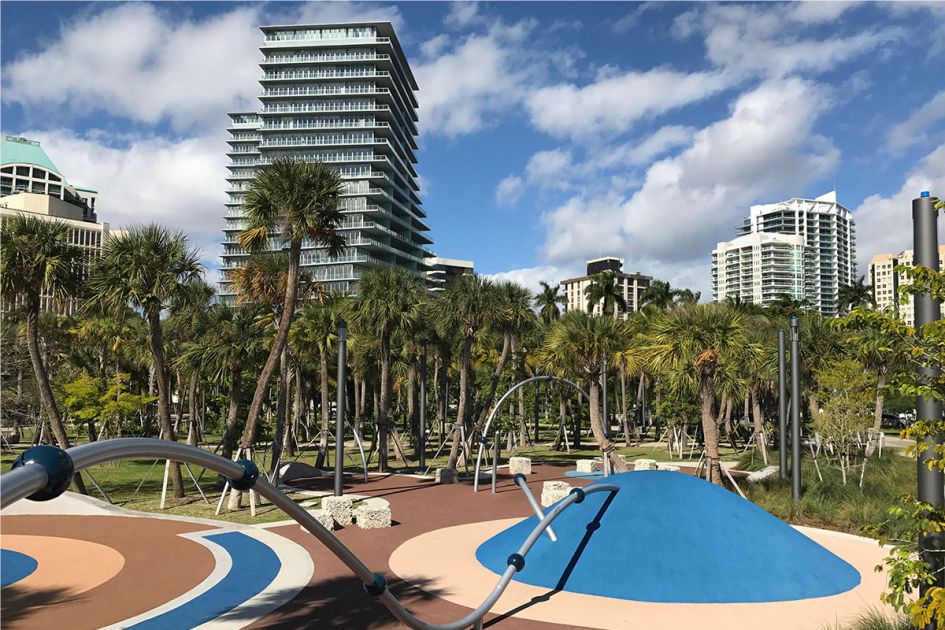 The beginning of this architectural ensemble put ... a tractor. James Deering, whose family grew rich in the production of agricultural machinery, was in charge of the accounting department of his father’s firm in Chicago. Poor health forced him to leave his native Illinois and move to a warm climate.

By order of Deering, architect Hoffman built on the shores of the Atlantic Ocean a charming villa in the style of the North Italian Renaissance. Paul Schalfan, director of the Boston Museum of Fine Arts and a close friend, helped to assemble a collection of objects of furniture and art. The landscape gardener Suarez created an amazing garden with sculptures, fountains, grottoes and labyrinths. In 1987, the villa was the meeting place of Reagan and John Paul II , today it is a wonderful beautiful museum with a unique antique collection.

In Coconut Grove, many sights begin with the word "first". Thus, one of the first houses of the district, built in 1881 by Ralph Monroe , a famous ship constructor, was preserved in the historic Barnacle Park. His peers - the house of Mariah Brown - is known for being owned by an independent colored woman. The Stirrupp house, built in 1897, also had a host - a “pioneer”, a native of the Bahamas and the largest landowner in the region. 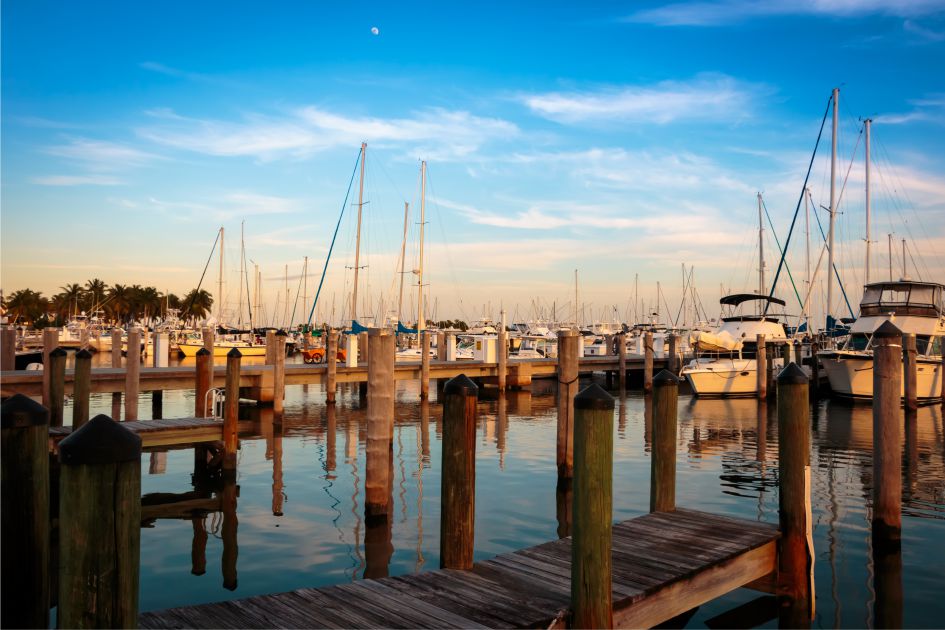 In the small "Coconut Grove" there is a large botanical garden of tropical plants - Kampong. It is one of the five territories of the National Association of Tropical Botanical Gardens, the other four territories are located on the Hawaiian Islands. The purpose of the association is to preserve endangered species; scientists, students and volunteers from all over the world work here.

Kampong is known for its fruit and flowering trees from Southeast Asia, Central and South America and the Caribbean, around which you can not only stroll, but also plan a wedding.

Architect Trayster's Mayfair Hotel was built in 1984, but the flowing lines of its facade and sculpted bas-reliefs embody Art Nouveau.

The elegant Cruz wedding house with openwork casting balconies was built in 2003, but it seems that it was miraculously moved from old New Orleans. The theater and the town hall are symbols of Art Deco geometry, their buildings really date back to the thirties of the twentieth century. Special mention deserves the Church of the Congregation. This Spanish-style building was built in 1917 by one person, Felix Reb. The lone architect used only an ax, a trowel, a plumb and a square .

Coco Walk - shopping arcade with fountains, nice shops and cafes. Nearby are cinema halls where you can taste a glass of wine while watching a movie, and Le Bouchon restaurant will delight you with French cuisine. Local artists can be found in the Crom and Christina Chacon galleries, and in February you can visit the rich Arts Festival .

Coconut Grove has a unique housing stock of buildings from the turn of the century and modern neighborhoods.

If you fall under the charm of this town, American Butler will help you find a comfortable place for a perfect stay.
Send a request
Also read
Coral Gables
The city of Coral Gables contributes to long lunches and very expensive shopping. Coral Gables center in Florida - Miracle Mile, a small street with a small length, attracting residents and guests… Read more
Cutler Bay
Tourists who come to relax on the coast of Florida, will be interested to know what sights to visit, what interesting things can be seen in these places. One of these places worthy of attention, is the… Read more
Doral
The city of Doral in Florida is one of the best resorts in the world, surprisingly calm and quiet. It is located in the northwestern part of Miami. Doral, Florida is a rather luxurious resort, like so… Read more
Little Havana
Miami is a true paradise for lovers of holidays and stunningly interesting vacations. No wonder many tourists flock to this American city to spend their well-deserved vacation. What is the suburb of Little… Read more
Taxi in the USA
Читать еще
US Visas
How to get a visa in the US alone? Every yesterday's applicant will tell his story. Often reviews are contradictory. For some, it was one of the easiest visas, for others - an unjustified refusal. But… Читать еще
Walt Disney
Disney cartoons are forever. Who did not cry under the "Lion King" and "The Little Mermaid", did not hang out in front of the "Cinderella" and did not try to speak like Donald Duck? But usually we see… Читать еще
Italian restaurants in Miami
Florida's best trattorias elevate the spiritual simplicity of the kitchen to unattainable heights and help visitors to appreciate the authentic flavors of the country's characteristic culinary regions.… Читать еще
Hoover Dam
Hoover Dam is one of the highest dams in the world, and at the same time a powerful hydroelectric power station. Tourists and residents come here to see the incredible scale of construction, go boating,… Читать еще
Craft Contemporary
Craft Contemporary is a building with more than half a century of history, a gallery of folk art. Since Los Angeles has become an important international art center, the Museum of Crafts and Folk Art… Читать еще
Coconut Grove 5 1 0 0
Sharing: